Even now, with Budapest a vibrant capital in the EU, there are public buildings and apartment blocks in the centre of the city pockmarked by bullet holes.

They are not accidental oversights but have deliberately been left as a reminder of a six-decade-old trauma that remains the defining moment in the history of modern Hungary and, more broadly, of the Cold War — or should we now call it Cold War I?

The tragic story of the failed uprising of 1956, when a small, impoverished nation, its people armed with little more than a few rifles and petrol bombs, fought for freedom against a massive Russian invasion force, has powerful resonance today — and not just because Hungary’s border with Ukraine is only 580 miles or so from Budapest. 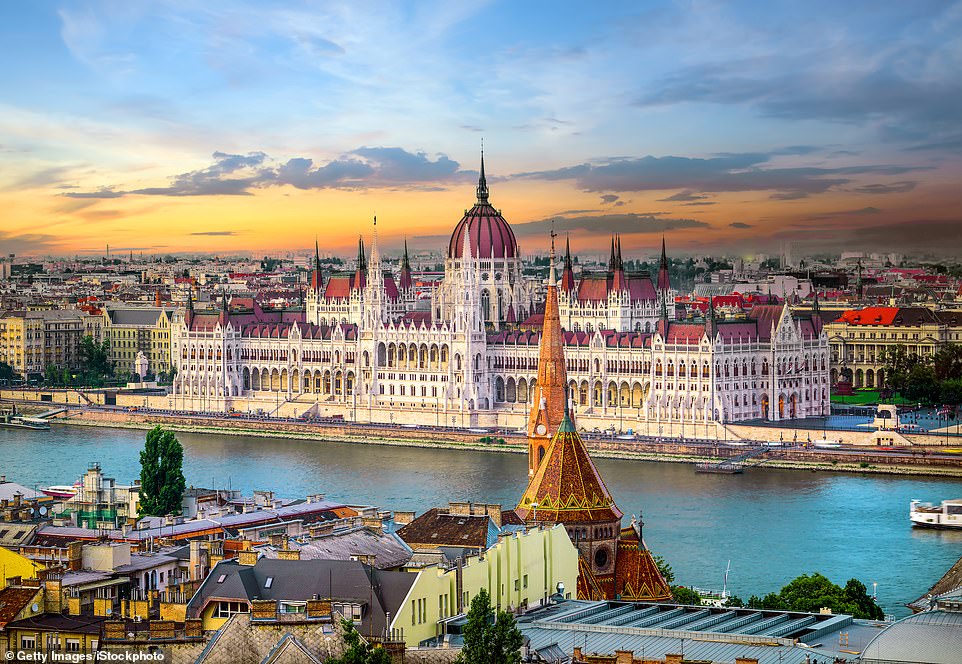 Architecture abounds: The parliament building on the Danube in Budapest. Hungarian author Victor Sebestyen shares his favourite places in the city, a place that has ‘beauty and charm, though behind both lies much darkness and tragedy’

It was a rousing example of extraordinary bravery in a doomed cause, which stirred the imagination of the world at the time — and still does. When I was in Budapest a few weeks ago, outside one of those scarred buildings from 1956, a Ukrainian refugee family whose home in a Kyiv suburb had been blasted to smithereens days earlier — a mother with three children given asylum in Hungary — were having their picture taken by a group of British visitors in an entirely unstaged photo op. The tourists were visibly moved.

Hungary and its prime minister for a dozen years, the controversial Viktor Orban, has had a much closer relationship with Vladimir Putin than almost any other European leader, which has left many people in cosmopolitan Budapest uneasy. On the other hand, he has just won an overwhelming fourth election victory and his pledges not to let Hungary get sucked into a nearby war went down well with voters outside the capital.

The Budapest-born British poet George Szirtes (himself a refugee from Hungary in 1956) described Budapest as a city ‘humbled by time and the ferocious moods of history’ and it is easy for any visitor for even the briefest period to see what he means.

Buda and Pest — it wasn’t one town until the latter part of the 19th century — have seen nearly a dozen revolutions, suffered 13 sieges and were left in near-total ruins five times. 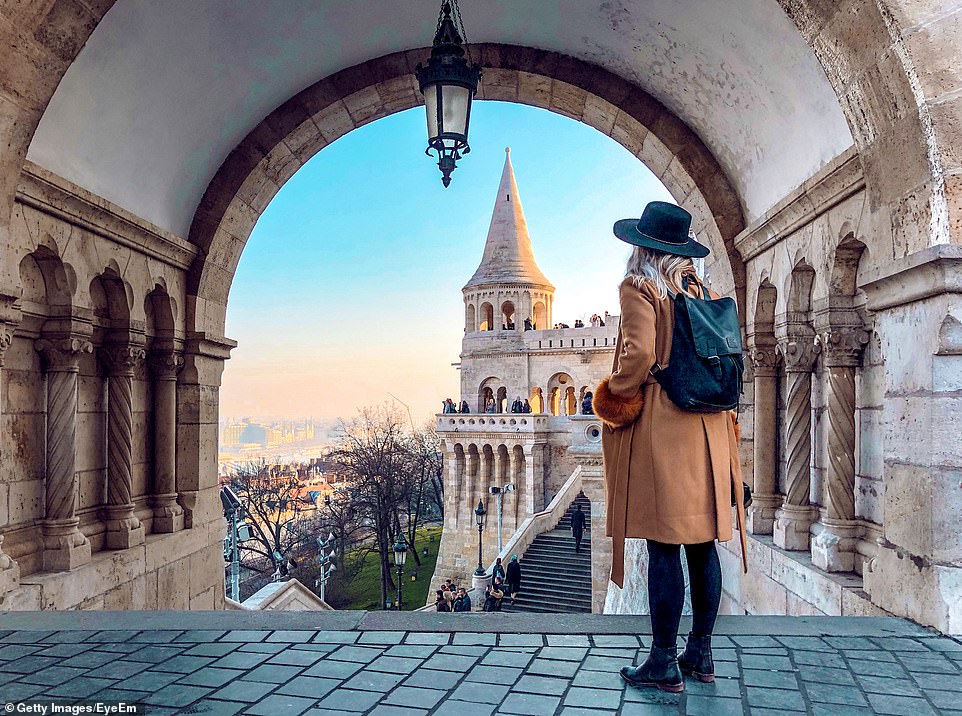 Grand spectacle: Above is the city’s Fisherman’s Bastion monument, one of many magnificent cityscapes 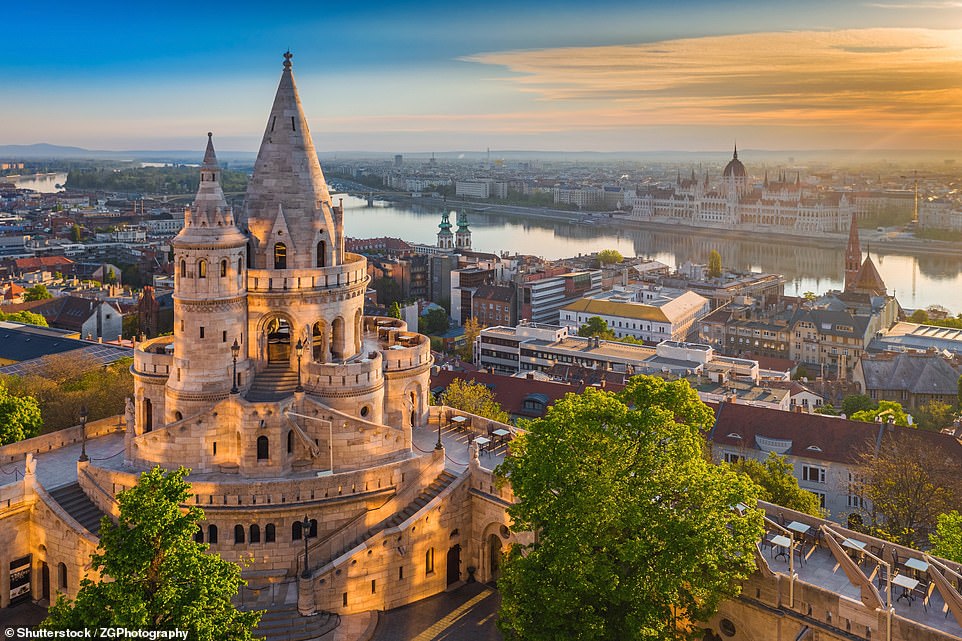 Serene beauty: The view across the Danube from the Fisherman’s Bastion on the Buda side of the city

Invaders have come and gone, empires have conquered, occupied for decades or centuries and left a few footprints behind. Today, the remnants of an ancient Roman bath house near the centre of the city in Florian Square — complete with beautifully preserved mosaics from the second century — stand next to a Soviet-era apartment block built in the 1970s that is already falling apart.

Almost every time I visit Budapest, the first place I go is a quiet, out-of-the-way section of old streets, some of them still cobbled, half way up Rozsadomb (Rose Hill) on the older, Buda side of the Danube.

It’s almost a secret: the graceful white mausoleum of Gul Baba, a Dervish holy man and favourite of the Ottoman Emperor Suleiman the Magnificent, whose armies conquered Hungary in the 16th century and occupied Buda and Pest for the following 150 years. The mausoleum is the northernmost place of pilgrimage for Muslims and is free to visit, but gets no mention in most Budapest guidebooks. 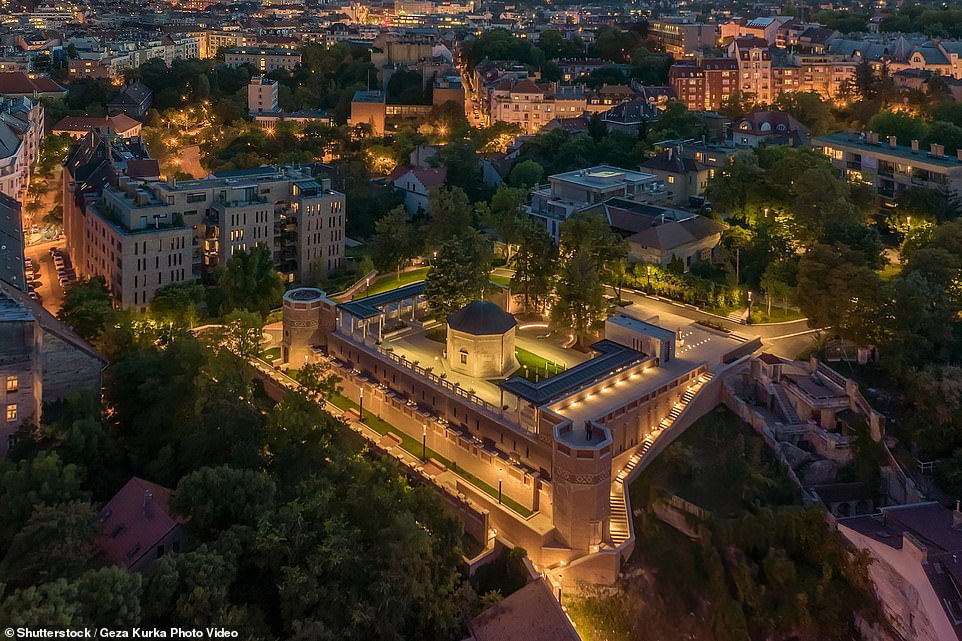 Pictured in the centre is the ‘graceful white mausoleum of Gul Baba, a Dervish holy man and favourite of the Ottoman Emperor Suleiman the Magnificent, whose armies conquered Hungary in the 16th century and occupied Buda and Pest for the following 150 years’

Mid-morning there is usually nobody about in the surrounding lanes bearing Turkish names — Ankara Street, Mecset (Mosque) Street, Torok (Turk) Street — one of the most expensive residential districts in Budapest, with fabulous views of the broad sweep of the river below as it bends through the city.

In spring, when the frosts melt away, the peaceful stone tomb is surrounded by the scent of first violets and then the most wonderful Damascena roses, said to have been brought to Budapest by Gul Baba himself.

True or not, the flowers, along with Turkish baths, paprika — and of course coffee, which came to Hungary two centuries before it reached Britain — are the few remaining physical reminders of the Ottoman occupation. They are not bad legacies when you consider the way other imperial masters of Budapest have left their mark — Hitler’s Nazis, say, or Stalin’s Commissars. 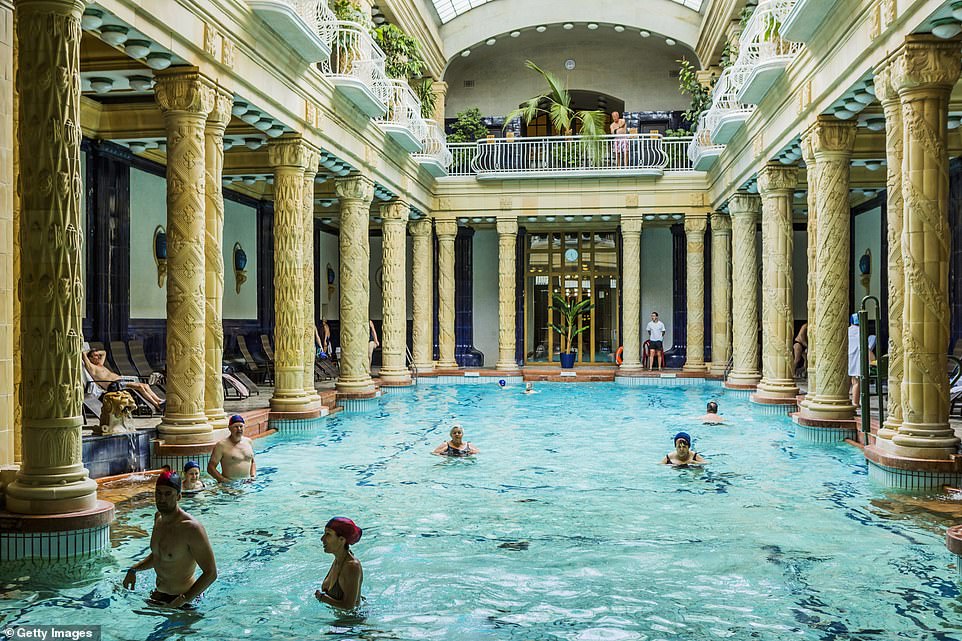 The Art Nouveau Gellert Bath in the city.  According to Victor, the Turkish baths, paprika, coffee and Damascena roses in the city are the few remaining physical reminders of the Ottoman occupation 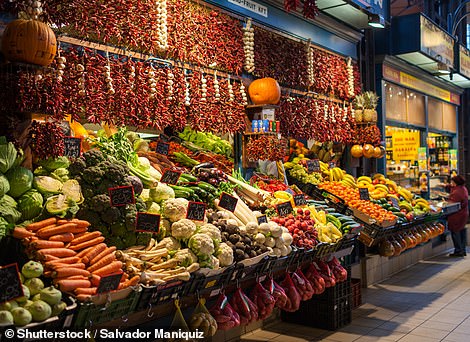 There is no shortage of hotels — but I can never resist the pricey but always reliable Gresham Palace, a secessionist gem set on the riverbank facing the more sedate Buda side of the city.

Once the vast HQ of a British insurance company, it was built around 1900 as a monument to capitalism at a time of extraordinary economic growth before World War I. Under the communists it was closed, left empty for decades and fell into decay before it was transformed around 15 years ago into a Four Seasons.

It is in the heart of the inner city and by the main sights, on one side of an elegant square directly opposite the first of the glorious 19th-century bridges across the river — a few steps from Pest’s marvellously ornate St Stephen’s Cathedral and even closer to one of my favourite restaurants for traditional Hungarian food, Cafe Kor, on Sas (Eagle) Street. 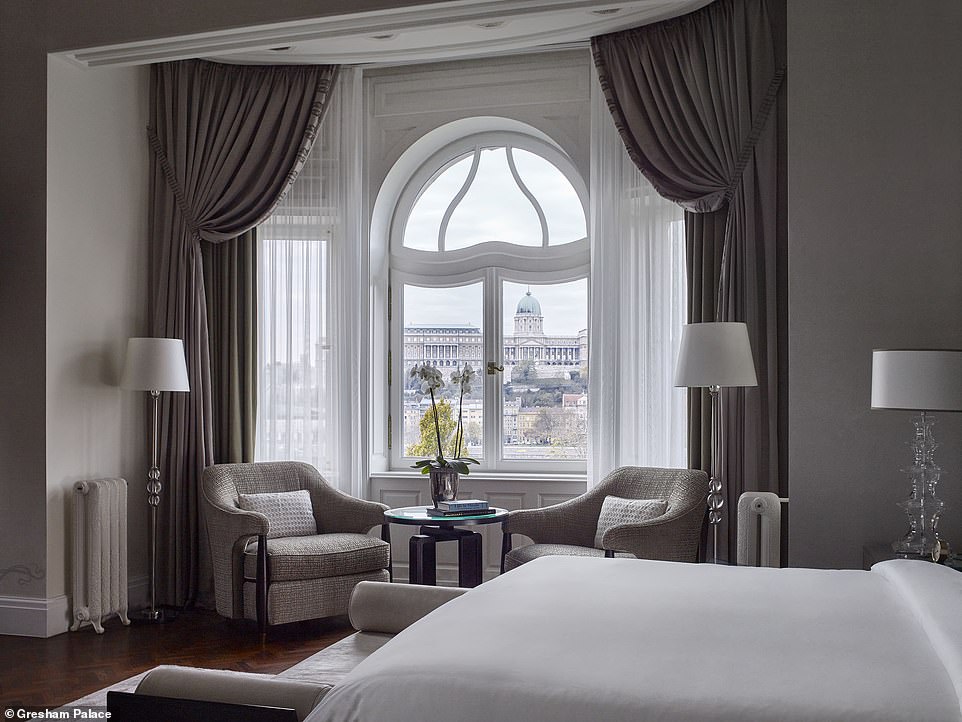 ‘There is no shortage of hotels — but I can never resist the pricey but always reliable Gresham Palace,’ writes Victor. Above is one of the hotel rooms with a view of Buda Castle 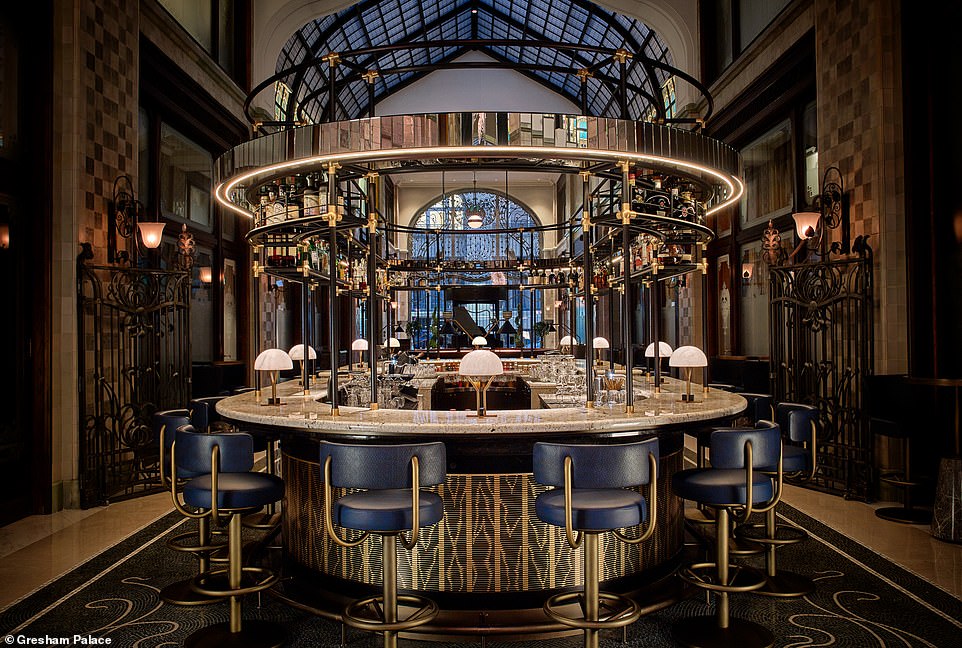 The bar at Gresham Palace, ‘a secessionist gem set on the riverbank facing the more sedate Buda side of the city’ 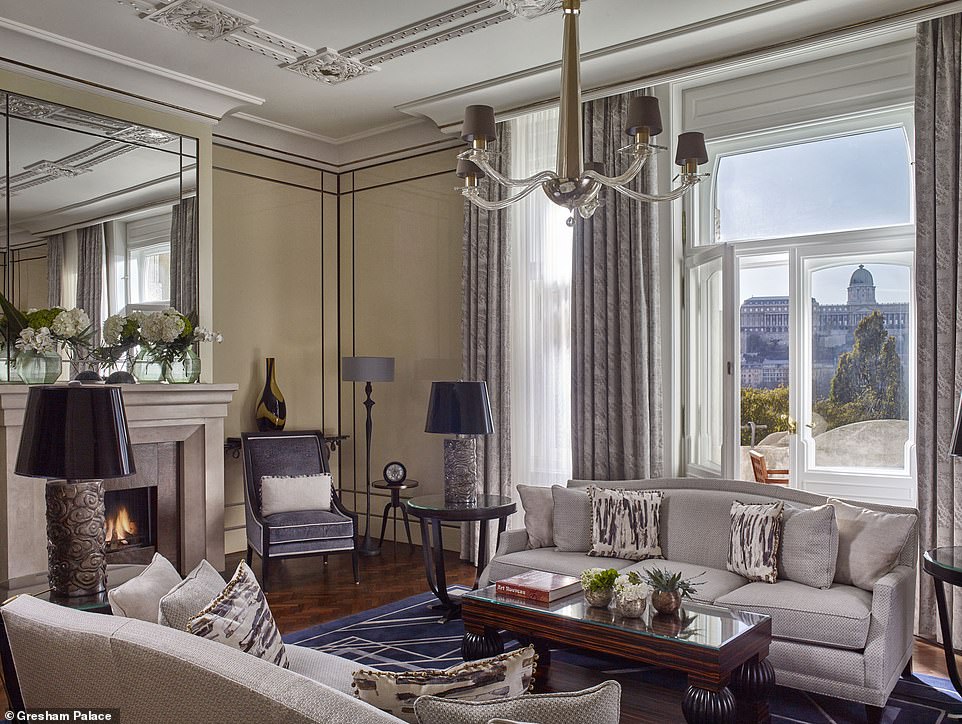 The living room of Gresham Palace’s Royal Suite. The building, formerly the vast HQ of a British insurance company, was left empty for decades and fell into decay before it was transformed into a Four Seasons around 15 years ago 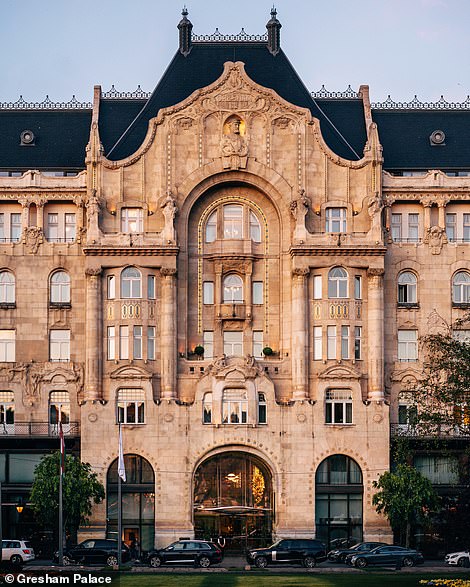 The grand exterior of Gresham Palace, which lies in the heart of the inner city

Before the Covid pandemic, Budapest received more visitors than any other European capital after London, Paris and Rome — and happily they are beginning to return.

For such a small, landlocked, on-the-face-of-it relatively insignificant nation, Hungary has outsize influence, culturally and — for good or ill — politically. Budapest is the beneficiary.

In the past, it was a favourite of travellers as diverse as King Edward VII, Theodore Roosevelt, Benito Mussolini, Hans Christian Andersen, Wallis Simpson, the great tenor Luciano Pavarotti and the first man in space, Yuri Gagarin. They all agreed the best thing about the place was its position.

The novelist Evelyn Waugh wrote that ‘with the Danube, Budapest forms one of the most beautiful cityscapes that exists along a river.’ The Danube is central to the city — figuratively as well as physically. One of the best ways of seeing Budapest, particularly at night during spring and summer, is on the river ferries, part of the cheap public transport network, or — kitsch but charming — a river cruise complete with (drinkable these days) Hungarian wine and violin music. 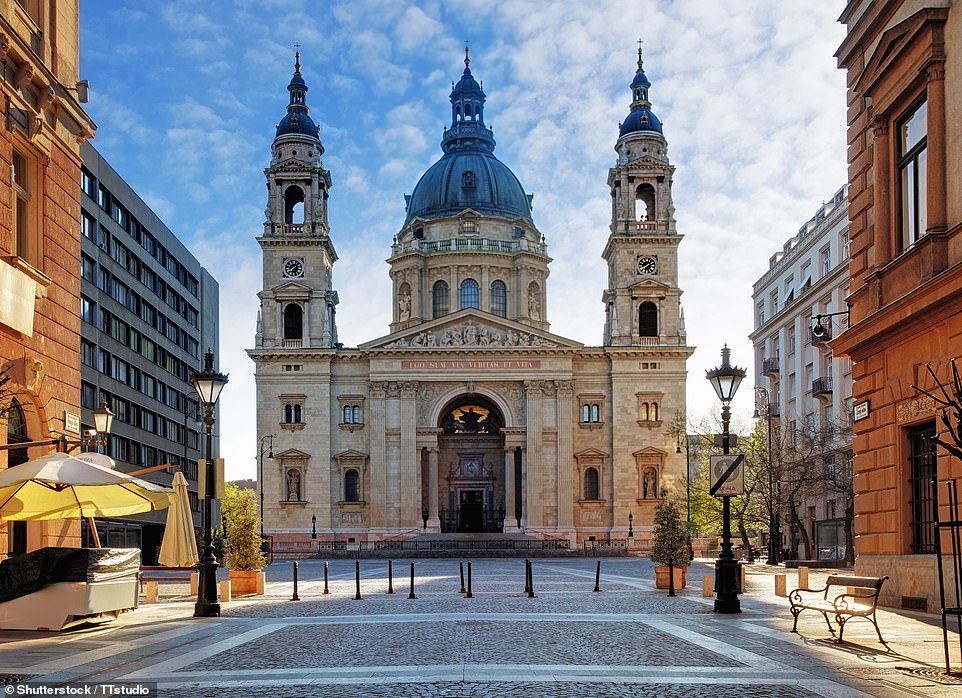 Pictured above is the ‘marvellously ornate’ St Stephen’s Cathedral, which lies on the Pest side of the city 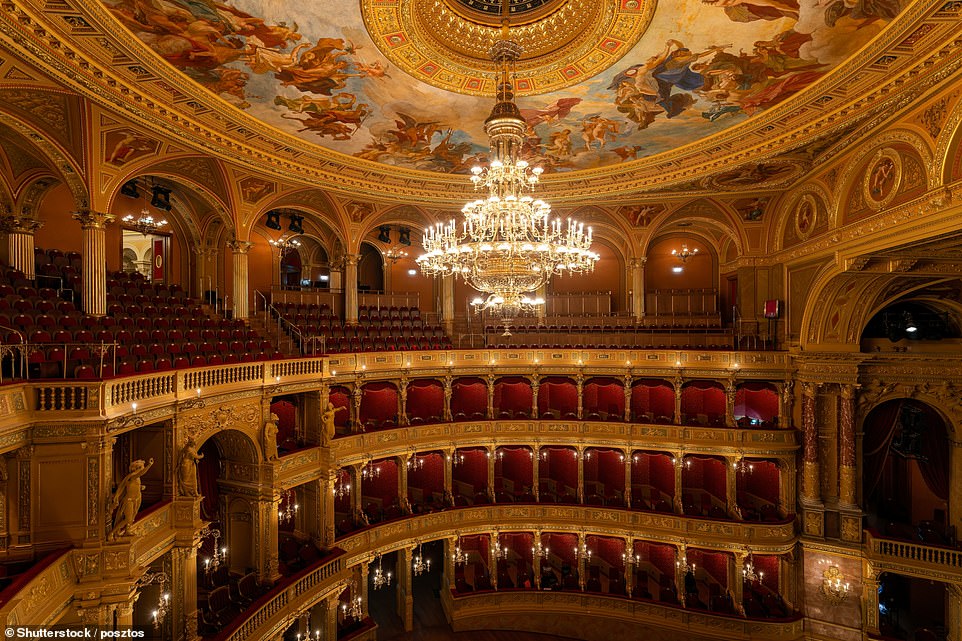 Even if you hate opera, the Budapest Opera House, newly reopened in April after a lavish four-year refurbishment, is a thing of opulent wonder. Above is the opera’s interior post-renovation

It remains a place of two halves, which co-exist. The newer Pest side, on the east, essentially a 19th-century creation, remains the most perfectly preserved Habsburg city in Mitteleuropa, with some of the finest Art Nouveau architecture anywhere.

Even if you hate opera, the Budapest Opera House, newly reopened in April after a lavish four-year refurbishment, is a thing of opulent wonder. It’s worth taking a tour round the building even if you don’t see a performance.

The ‘ruin bars’ of Pest — old, crumbling spaces from the Habsburg past, the fascist past and the communist past turned into fashionable nightspots where the young (and a few old) party — strike a historian as by no means the worst way for a people with a history as tumultuous as Hungary’s to deal with their demons. 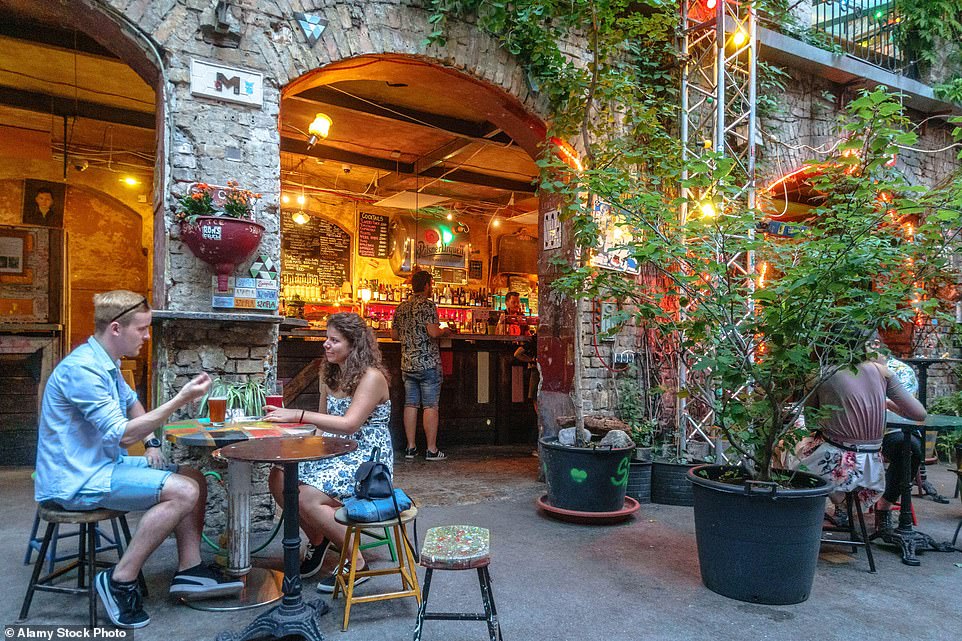 Above is Szimpla Kert, one of the ‘ruin bars’ of Pest — ‘old, crumbling spaces from the Habsburg past, the fascist past and the communist past that have been turned into fashionable nightspots’ 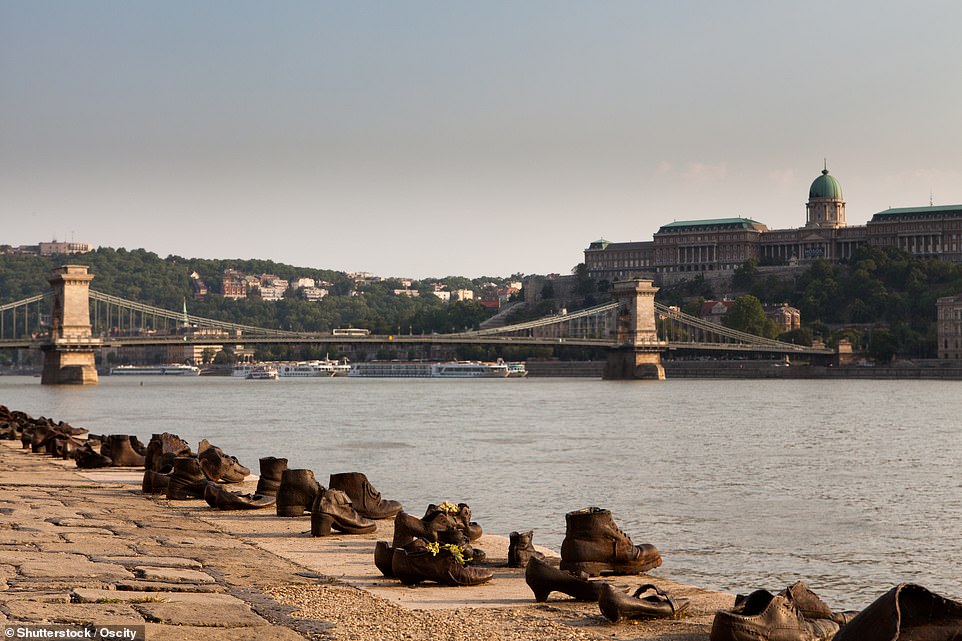 British Airways (ba.com) flies to Budapest from Heathrow from £153 return; Wizz Air (wizzair.com) from Stansted from £66 return and EasyJet (easyjet.com) from Gatwick from £109 return. Double rooms at the Gresham Palace Four Seasons (fourseasons.com/budapest)start at £347.

Buda, mostly set atop a series of gentle hills, is quieter, calmer, older, the lovelier parts all baroque, with yellow and cream stucco in elegant, quiet streets. Budapest has grandeur, if faded around the edges; beauty in a gritty, lived-in sort of way. It is the city of my birth — though I was a baby when my family left as refugees in 1956 — and I do not pretend to be entirely objective about its beauty and charm, though behind both lies much darkness and tragedy.

Budapest suffered terribly during World War II and the German occupation. As so often, Hungarians have turned catastrophe and suffering into powerful art. Practically every city in Europe has a Holocaust memorial; a simple display on the Pest side of the river is perhaps the most moving and thought-provoking of them all.

In Budapest, during the last months of the war, thousands of Jews were murdered in the city centre itself — lined up on the river embankment, shot and thrown into the Danube. Sixty pairs of iron and steel sculpted shoes are arranged at apparent random, though all point towards the river, to remember the victims. It is a work of extraordinary stillness and depth.

The whole of central European history can be seen walking the boulevards and byways of Budapest — the good, the bad, the beautiful and, at times, the ugly.