Norway must be the most outdoorsy country on Earth. In winter, everyone is out on their cross-country skis; in summer, it’s cycling, hiking, surfing, sunbathing, practising cross-country skiing or, well, just being outside.

That’s true whatever the weather — which is just as well, as Stavanger, on the west coast, can get drizzly in summer. This is where Spain’s Torremolinos wins out for a lot of people.

But, given a choice between 16C (61F) and drizzle on Stavanger’s Sola beach and 45C-plus in Andalucia — temperatures that are no longer out of the ordinary — there are lots of us who would take Norway any day. 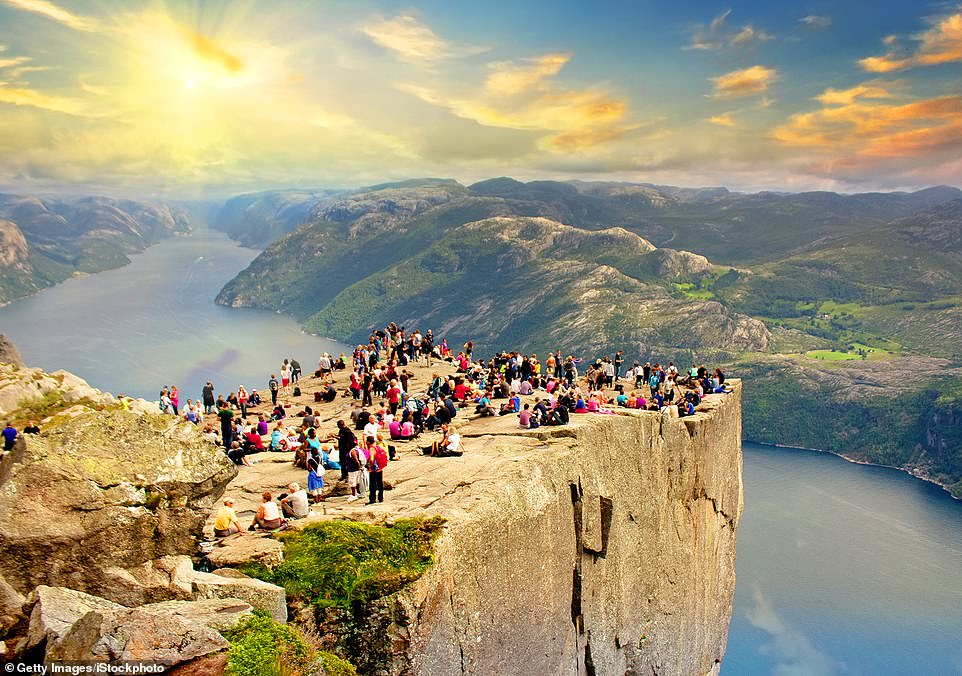 High life: Mark Jones explores Norway’s west coast, which is home to one of the country’s ‘most majestic sites’ – Pulpit Rock (pictured), a rocky perch 600 metres above Lysefjord 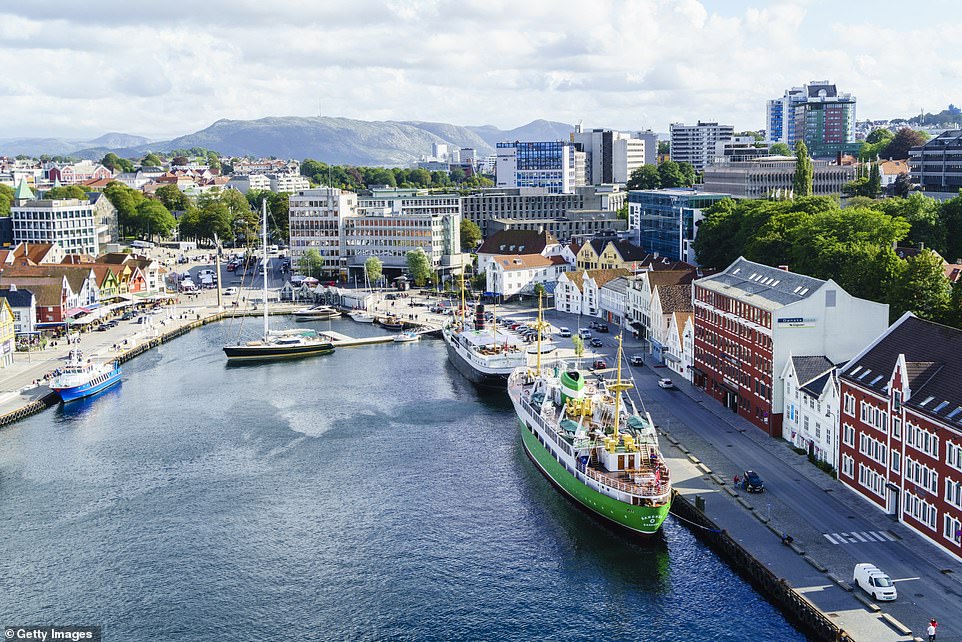 Mark, who has been holidaying in Norway for the past 25 years, visits the oil city of Stavanger in the south-west of the country (above) for the first time 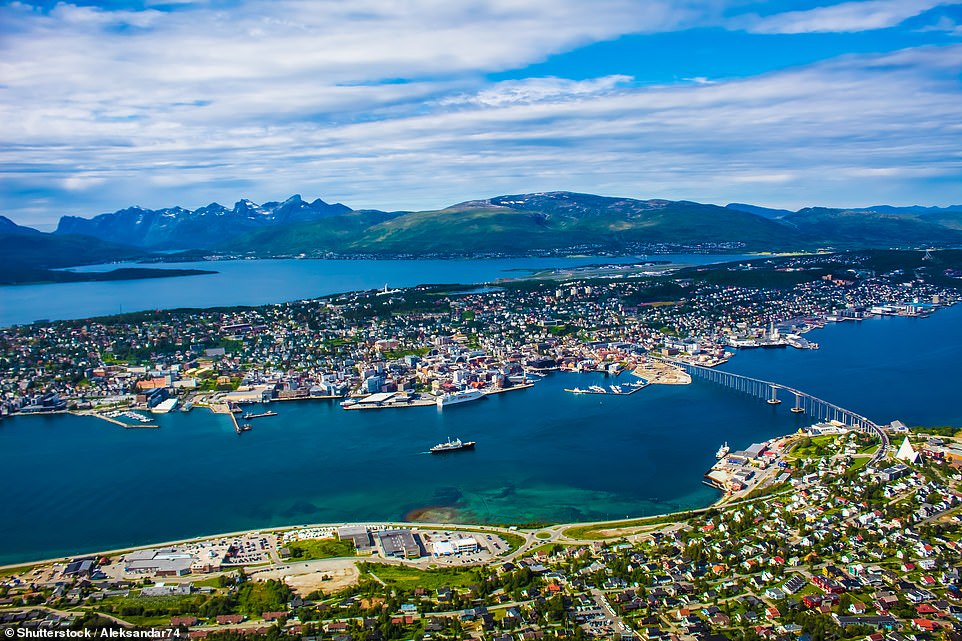 Mark has previously spent New Year’s Eve on Tromso, pictured. ‘Norwegians might seem introverted to visitors, but they love company, family and togetherness,’ he observes

I’ve been visiting this spectacular country (population 5.4 million) for 25 years: to the Arctic peninsula of Svalbard and the magical Lofoten islands in midsummer; for New Year’s Eve on Tromso and Utsira (of shipping forecast fame).

I’ve slept in a pepper-pot lighthouse in the harbour of Alesund, hiked above the towns of Bergen and the Voss, taken the scenic railway to Flam and spent a few nights in the funkier parts of Oslo.

But this is my first time in the oil city of Stavanger in the south-west of the country. Maybe the clue is in those words ‘oil city’. It conjures up images of Houston. Or Canvey Island.

Shame on me. The beach here has tufty dunes, one and a half miles of clean, pale sand and a handful of bathers not finding social distancing an issue. You feel as if you have landed in a remote corner of Australia without the bother of a 24-hour flight. The cheerful, white‑walled Sola Strand spa hotel has been welcoming beach lovers and health enthusiasts since 1914.

Do what everyone should do as soon as you land in Norway: order a cold bottle of local pilsner beer and a hot bowl of fish soup.

Stavanger’s Sola beach, pictured, has tufty dunes, one and a half miles of clean, pale sand 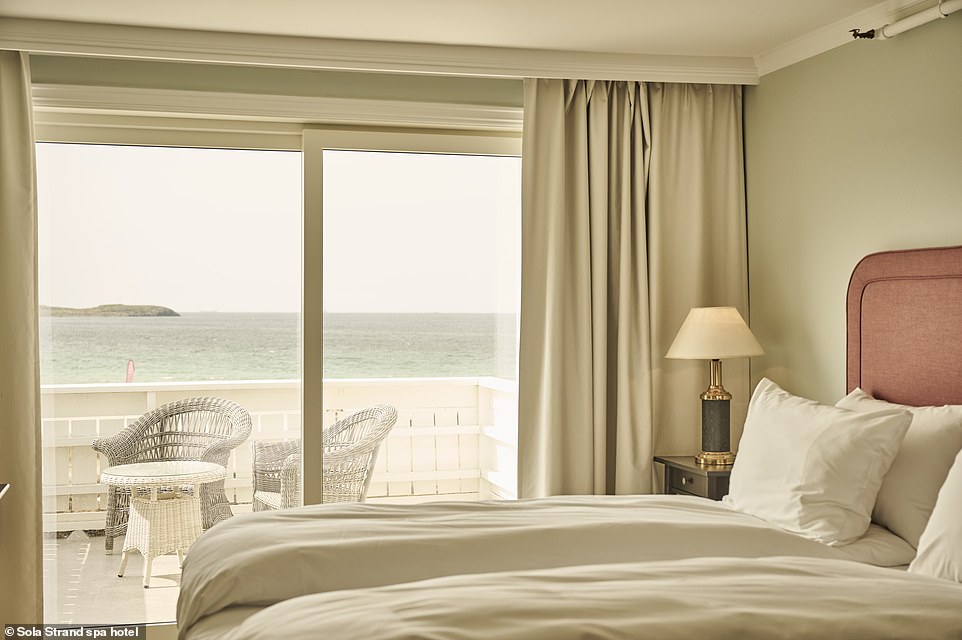 A room inside the cheerful, white‑walled Sola Strand spa hotel, which has been welcoming beach lovers and health enthusiasts since 1914 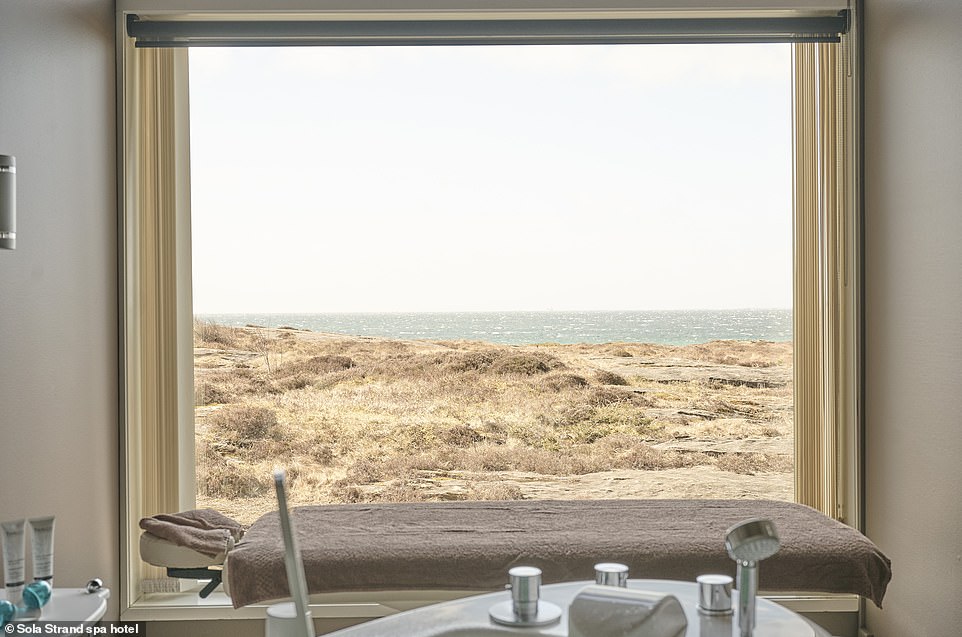 A spa treatment table with a view at Sola Strand spa hotel. Of the beach, Mark writes: ‘You feel as if you have landed in a remote corner of Australia without the bother of a 24-hour flight’ 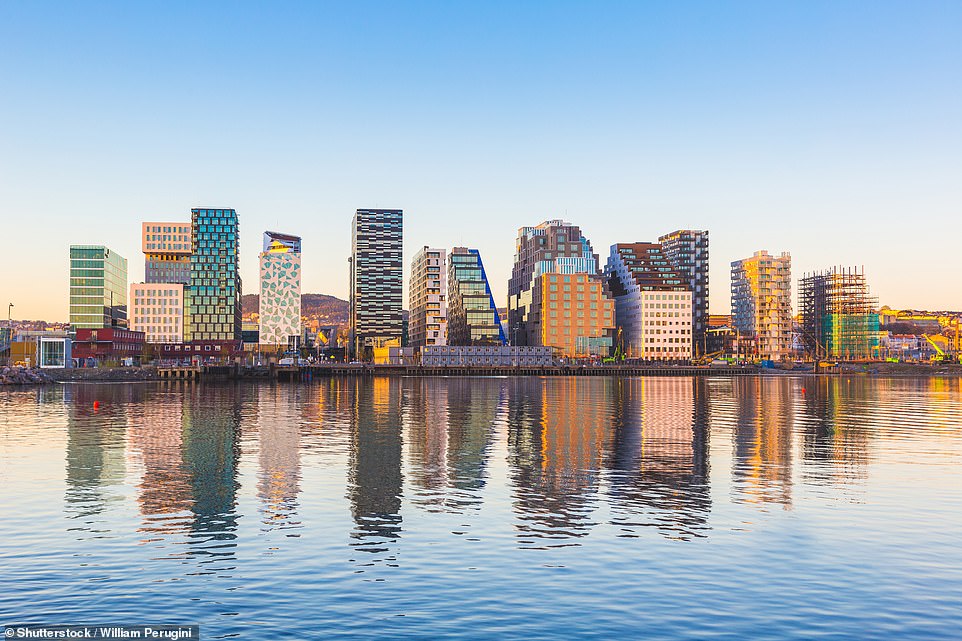 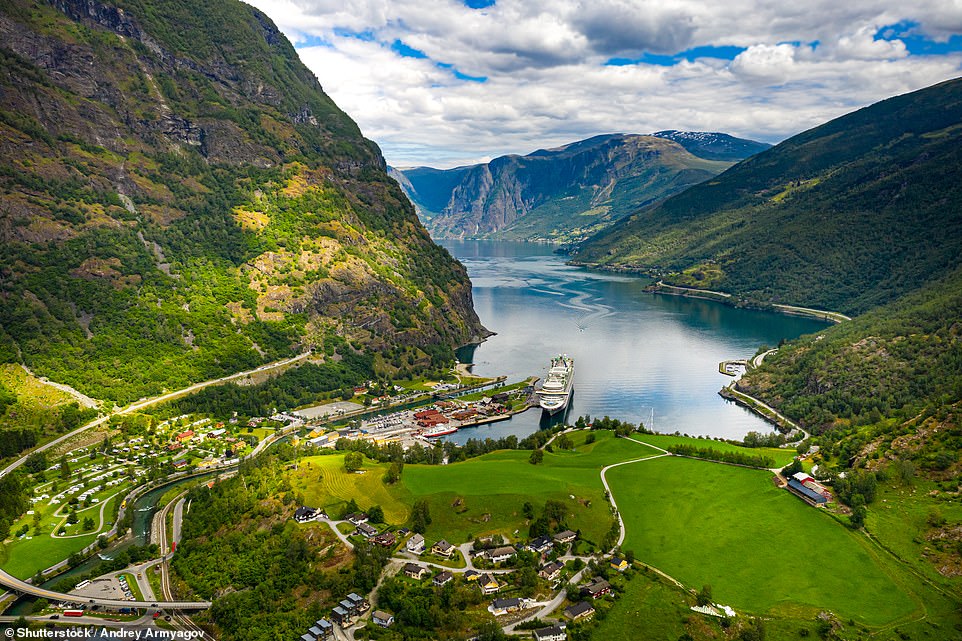 Taking the scenic railway to Flam, pictured, is among the highlights of Mark’s many trips to Norway

The only sound is the helicopter ferrying oil workers to their distant rigs. And the only thing to disturb the view is a leathery old chap standing in the dunes clad in budgie smugglers.

He seems keen to share his physique, especially the back half. I’m pretty certain there’s a law in Norway that says the older you are, the fewer clothes you have to wear.

Still, he is undoubtedly the picture of health and a fitting ambassador for his country.

What’s more, Stavanger turns out to be an archetypically sweet, calm, clean, cobbled Norwegian town. Oslo is a proper city, but the rest, including the second biggest, Bergen, are low-rise and low-energy gateways to the country beyond. 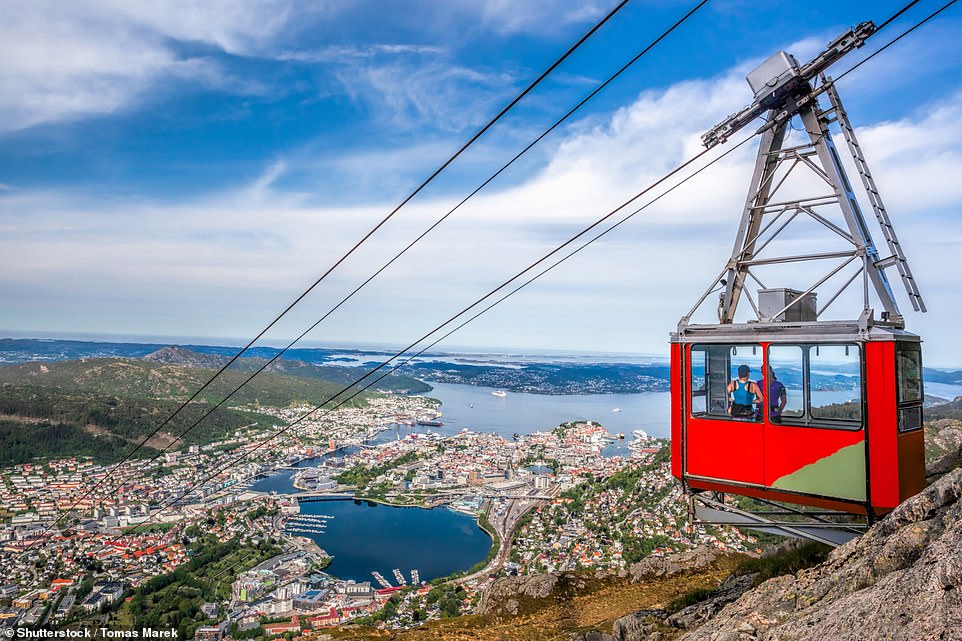 Mark describes the city of Bergen, pictured, as a low-rise and low-energy ‘gateway to the country beyond’

Stavanger, the third biggest municipality, has retained its classic wooden houses, unlike Alesund to the north, which was rebuilt in Art Nouveau style after a catastrophic fire in 1904.

I am admiring the oldest of the houses when my guide, Lars, pulls me back on to the pavement. A huge Audi 4×4 coasts past, making as much noise as the average pram. They are into their electric cars in Stavanger.

My irony metre twitches into life. It does again when they apologise that the electric boat that travels along the fjords is out of service.

This, lest we forget, is the oil capital of the North Sea. 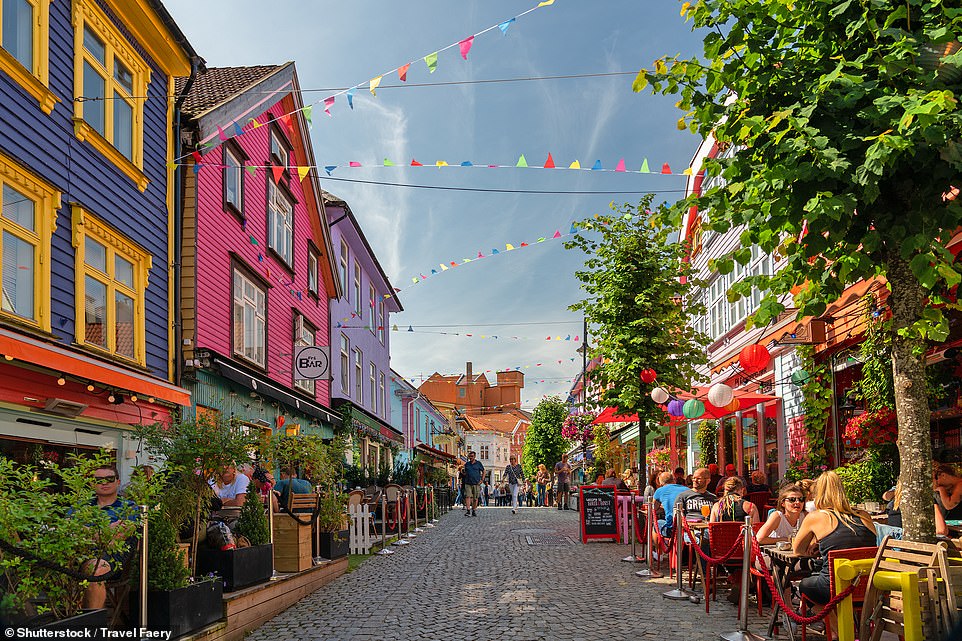 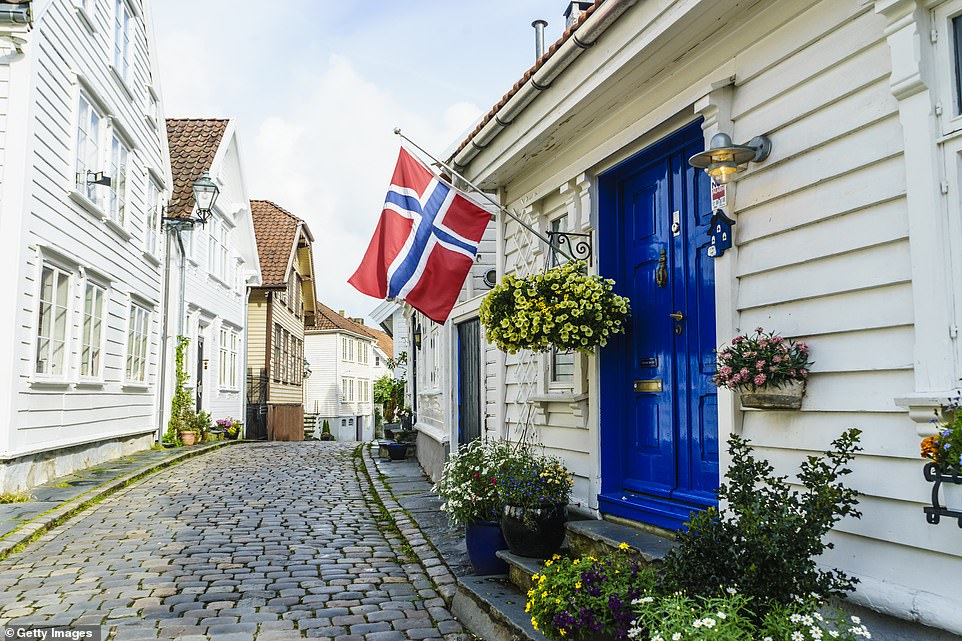 Unlike other parts of Norway, Stavanger has retained its classic wooden houses, Mark reveals. Above is a street in Gamle Stavanger, the city’s historic centre 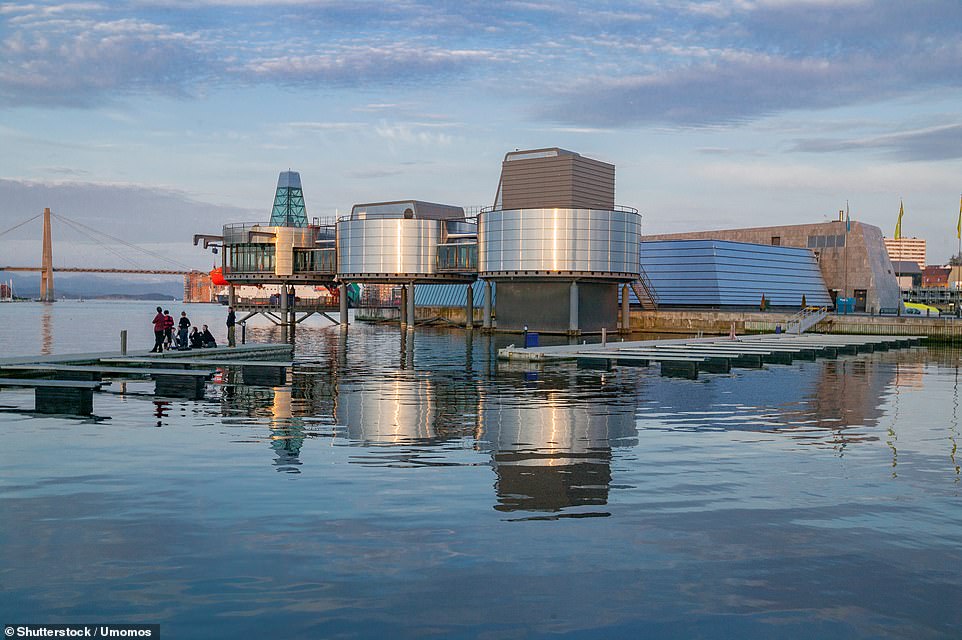 Mark tours the ‘brilliant’ Petroleum Museum in Stavanger, pictured, which celebrates the ‘technological feats that brought the black gold to shore’ in Norway

GOOD TO KNOW BEFORE YOU GO

Wealth in Norway moves as stealthily and discreetly as that Audi. It has been called the one country that has avoided the curse of oil — the corruption, the bling, the way it distorts economies and a country’s culture. Everyone can go online and see each other’s tax returns.

The story of Norway’s oil boom was brought to life in the recent BBC series State Of Happiness — and in the brilliant Petroleum Museum in Stavanger.

No, my heart didn’t leap at the thought of visiting a museum about oil. But it’s gripping stuff. The exhibits celebrate the technological feats that brought the black gold to shore — and agonise over the effect that has had on the planet. Very Norwegian, that.

Norway came to oil late. The first big confirmed find wasn’t until 1969. It had plenty of time to see others get it wrong.

I meet Ingrid, a 27-year-old woman from Stavanger who lives in London’s Notting Hill. She had just made her first trip home since lockdown.

‘Norwegians and the government are on the same page when it comes to spending this money, creating less corruption, less conflict,’ she says. ‘The wealth we get from oil is for the future generations as well.’

After oil was found, Norway set ten commandments for coping with a discovery that would transform its relatively poor, agricultural society. One was that the oil money should be used to ‘develop new industry’.

Down the coast at Borestranda you can see how some of the money has trickled through. It’s an even better beach than Sola — higher and tuftier dunes, a wider expanse of sand, fewer people enjoying it. This is Scandinavia: even the shower block in the car park looks as if it has won major design awards.

It’s a short walk to Boretunet ‘Tiny Houses’ — a hostel and surf school made out of old wooden shipping containers. It looks a lot slicker than it sounds, although the interiors take their design inspiration from the average teenager’s bedroom.

Owner Per Arne Zahl is another good advertisement for the Norwegian way. With his dreadlocks and unlined, tanned face, he looks like he’s on his university gap year. In fact, he’s 38, having spent his working life as a rope technician dangling from oil rigs and construction sites. 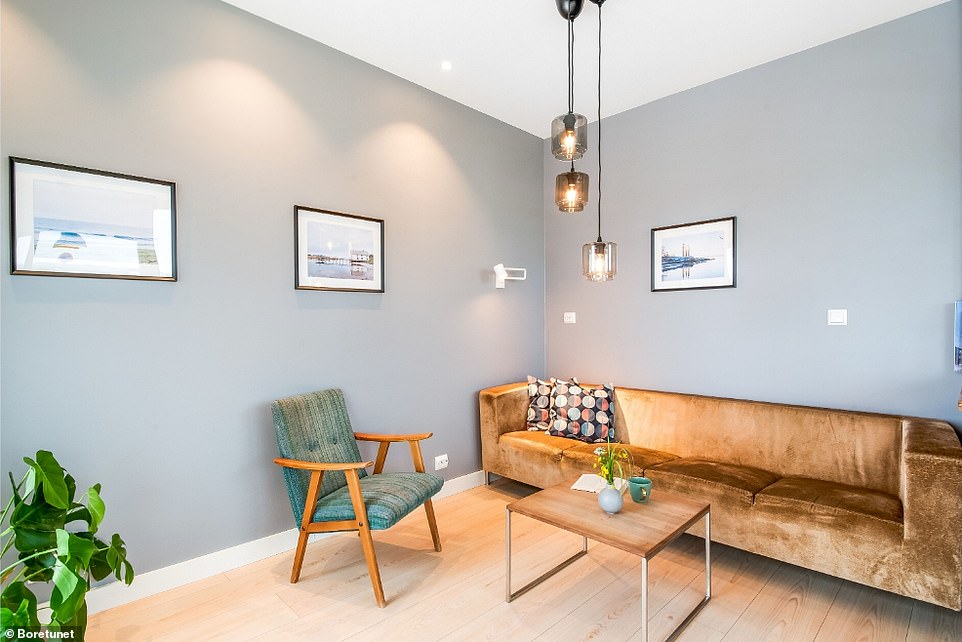 One of the ‘Tiny Houses’ at Boretunet, a hostel and surf school that opened in November 2019 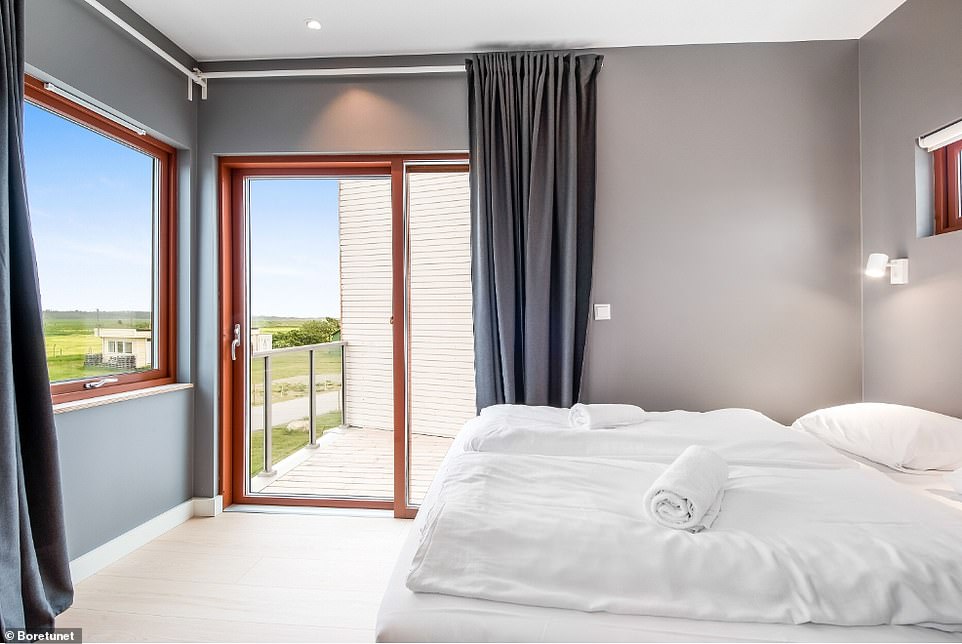 Mark says that Per Arne Zahl, who runs Boretunet, is a ‘good advertisement for the Norwegian way’. ‘With his dreadlocks and unlined, tanned face, he looks like he’s on his university gap year,’ he writes. Above is a bedroom in a ‘Tiny House’ 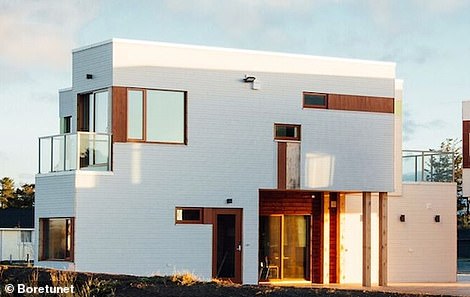 Now he’s trying to find a balance between that life and sharing his passion for surfing, kite-surfing, windsailing and anything fun you can do on a beach.

He opened in November 2019: terrible timing. But the banks and the State, backed by that oil dividend, will continue to support businesses like Boretunet.

It will be a good investment. We’re in the Jaeren region here — the ‘open land’: mile after mile of grazing, white beaches and quiet roads punctuated with red-roofed houses and tiny churches. And if you get tired of the flatlands, you are just a short fjord cruise away from one of Norway’s most majestic sites: Pulpit Rock, Preikestolen — a rocky perch 600 metres above Lysefjord, hairy enough for Tom Cruise to have dangled off it in Mission Impossible: Fallout.

Yet at the small beach in the village of Olberg — about 15 minutes’ drive from Borestranda, there’s an almost Bournemouth-like density of exposed flesh. 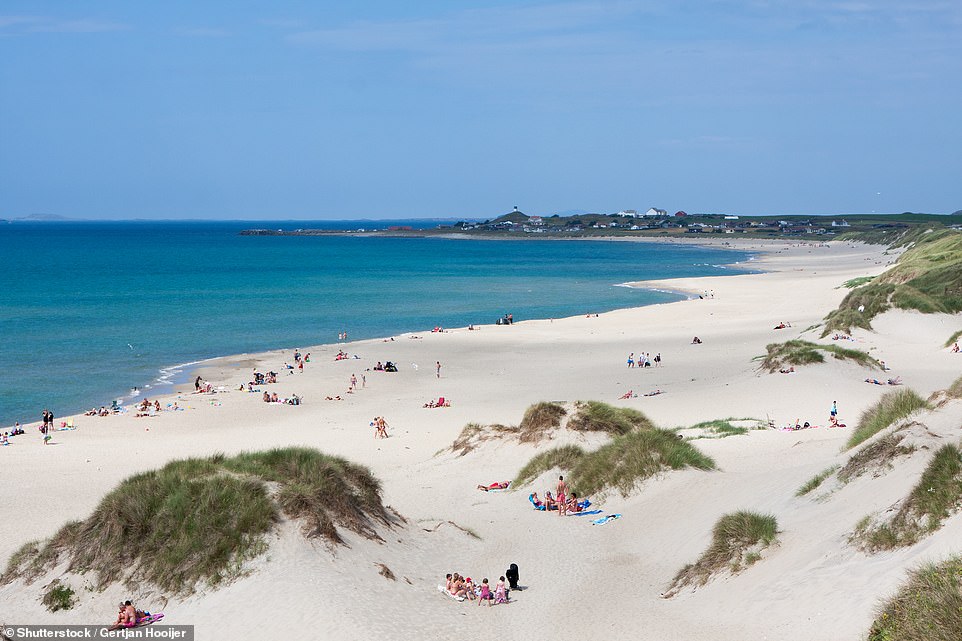 Mark heads down the coast to Borestranda beach (above), where ‘even the shower block in the car park looks as if it has won major design awards’ 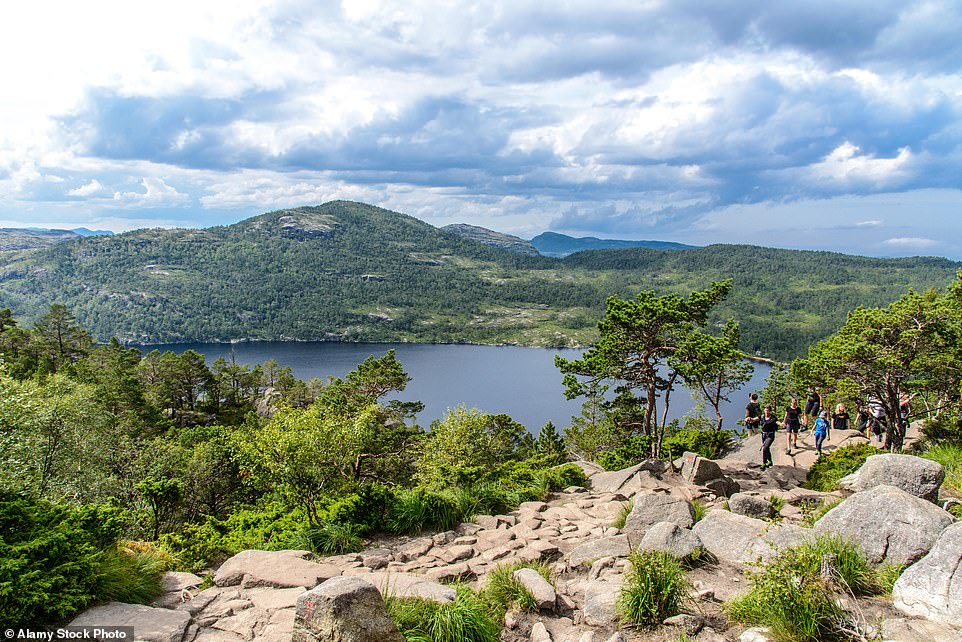 Pictured is the hiking route to Pulpit Rock, Preikestolen. ‘The cliff is hairy enough for Tom Cruise to have dangled off it in Mission Impossible: Fallout,’ Mark notes 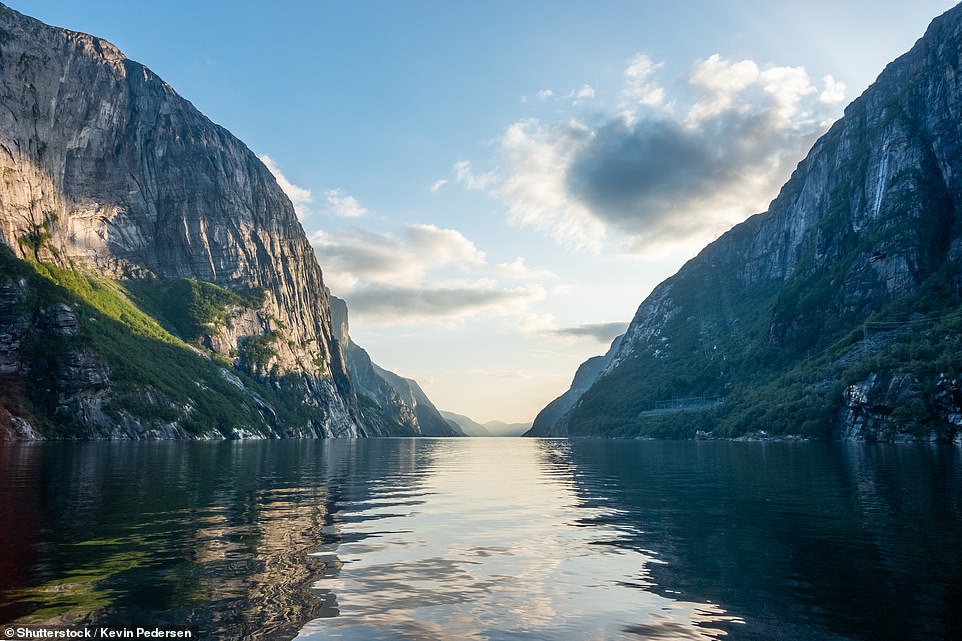 A view of Lysefjord, home to Pulpit Rock, from the village of Lysebotn at the eastern end of the fjord 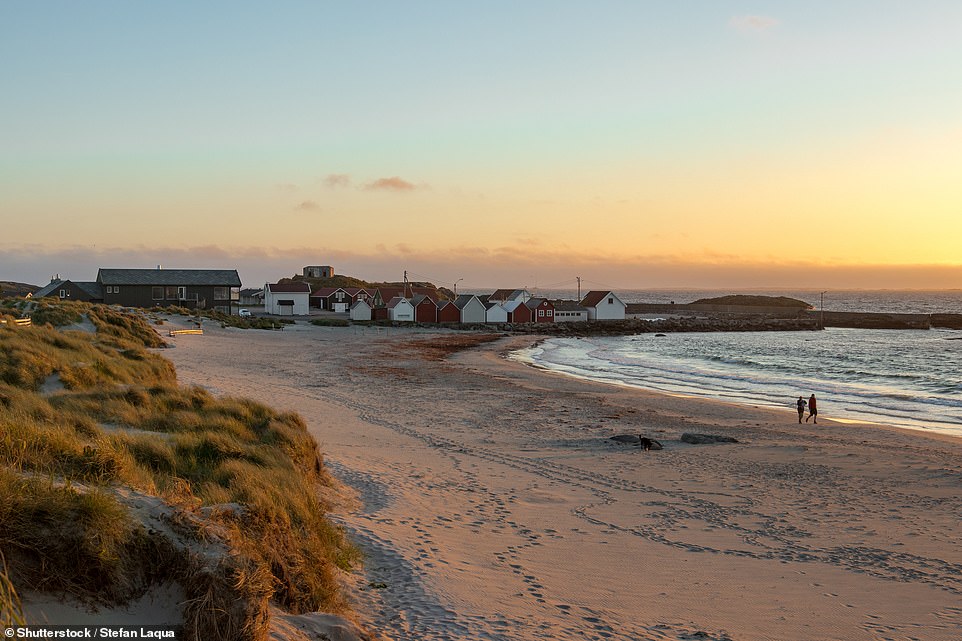 At Olberg bay, pictured above, Mark finds that the sea ‘is as benign as a paddling pool’

Mark recommends trying the mussels at Olberg’s Strandhuset cafe (above)

It’s odd. The car park is packed, the agreeable Strandhuset cafe (try the mussels) almost empty. I suspect the sea may have something to do with it. At Olberg bay, it is as benign as a paddling pool; not so at Borestranda, where they warn you about strong undercurrents. Or it might be that the sunbathers at Olberg are just enjoying a moment of ‘kos’. Kos is the word designed to make a Norwegian heart skip a beat.

Kos — the small joys of being around a campfire with friends, sharing a waffle (they adore waffles) over coffee at home, or gathering together on a beach when the sun comes out. Norwegians might seem introverted to visitors, but they love company, family and togetherness.

‘Temperature is important,’ Ingrid tells me. ‘You cannot be cold — that ruins the kos completely!’

‘Isn’t it good, Norwegian wood?’ sang The Beatles. Norwegian sun and sand are pretty good, too.