Through Stephanie Linning for Mailonline

All dogs love their walkies.

But few have experienced the adventures spaniels Hugo and Spencer have with their owner, Hollie Jenkins.

Hollie, 26, from EdinburghShe brings her beloved puppies with her when she goes wild camping and hiking around Scotland, even providing them with their own sleeping bags. 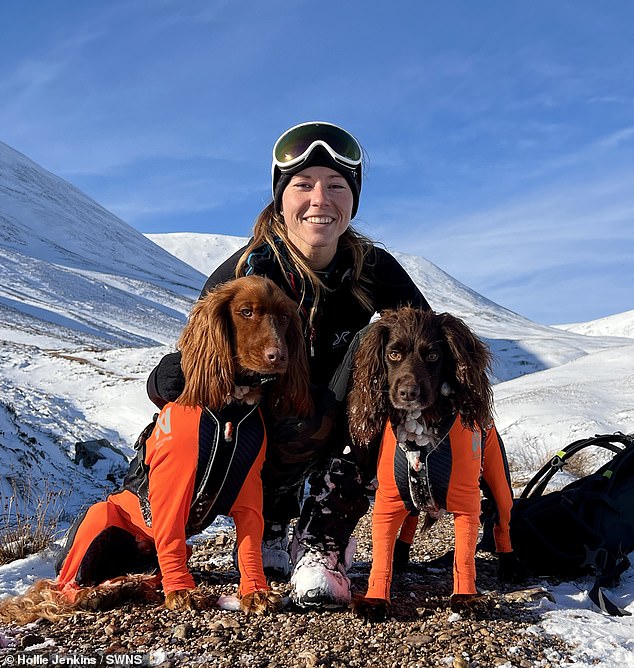 Dynamic duo! Hollie Jenkins, 26, from Edinburgh, brings her beloved pups with her when she goes wild camping and trekking around Scotland, and even gives them their own sleeping bags 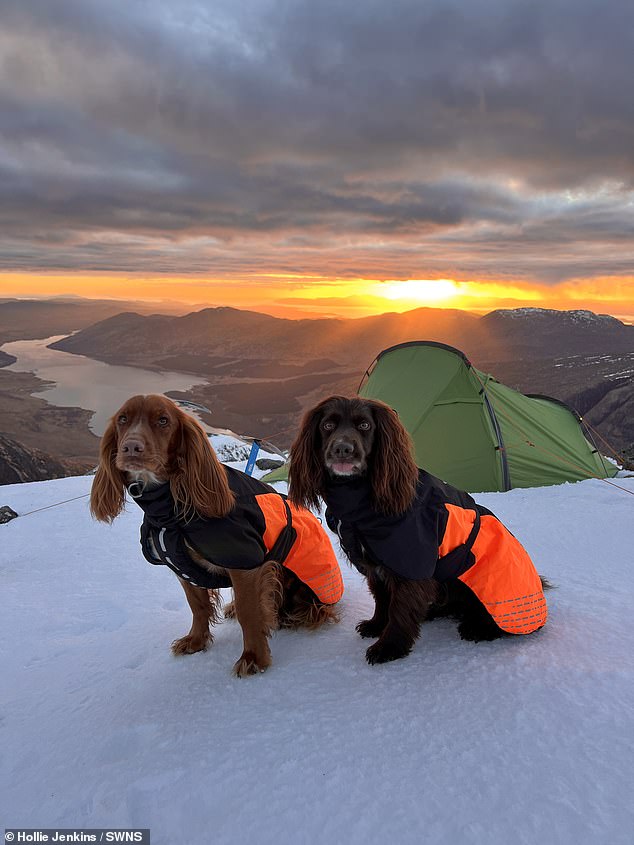 Viewing the sights: Loyal spaniels Hugo and Spencer, pictured, have ‘bagged’ 90 Munros – mountains in Scotland over 3000ft – in the last year.

The faithful spaniels have ‘bagged’ 90 Munros – mountains in Scotland over 3,000 feet – in the last year.

Hollie, who works in veterinary medicine marketing, said: “On my 25th birthday I decided to climb Ben Nevis. At that point I didn’t even know what a Munro was.

“After that I was like, ‘Let’s do another one’ and I just got the Munro bagging bug and I knew it was for me. It’s a different world when you’re on a Munro, I love it.

“I’ve climbed 90 in total, 78 of which are unique and 12 I’ve done more than once. During lockdown my eyes were opened to hiking and I really got into it. 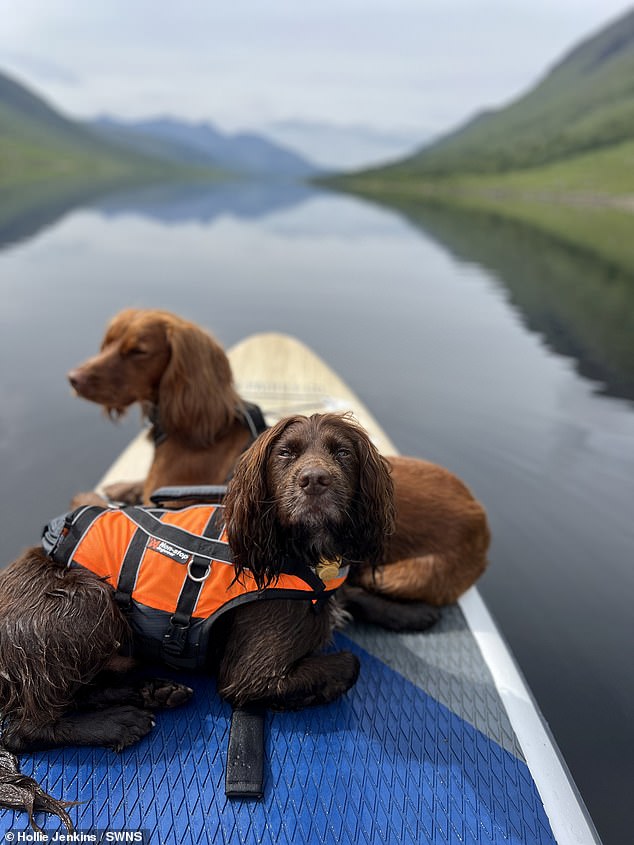 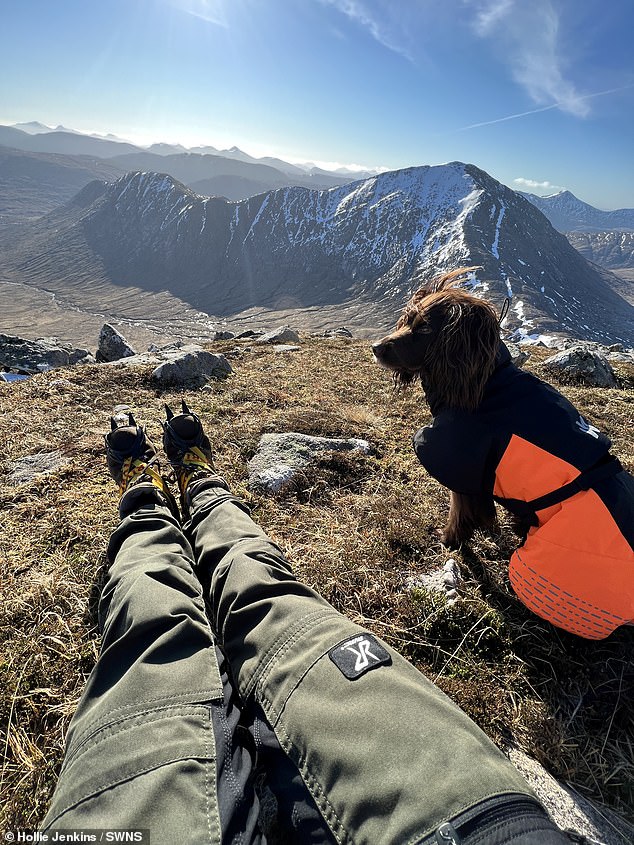 Time to Relax: The spaniels love to run around while Hollie goes hiking, but know when it’s time to settle down and rest 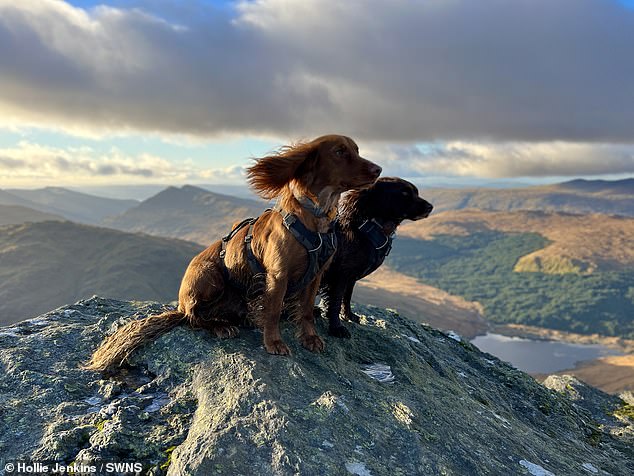 On top of the world! Hugo and Spaniel stop on top of one of the Munros to catch their breath 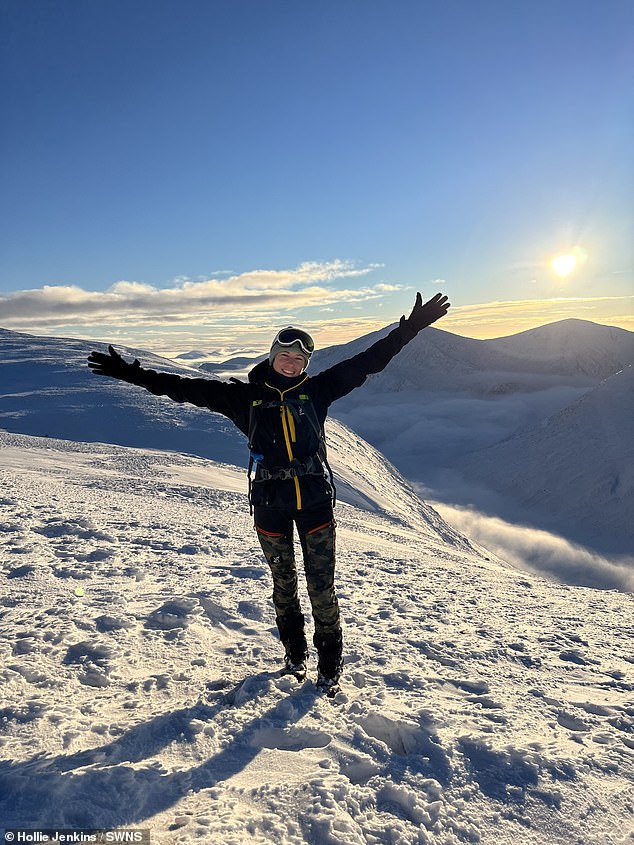 The dogs wear a harness tied around Hollie’s waist so she can free her hands to climb. She also takes other precautions to protect her pets.

“They have black and orange coats and ’80s lycra suits that look like spandex because the temperature can drop and it can get really cold,” she said.

“In the winter, the suits help keep the snow off their fur. “They each have a dog sleeping bag for the tent when it’s cold.

“They also have little booties that I take with me when we climb to protect the pads of their paws and they help keep the snow off their paws in winter. 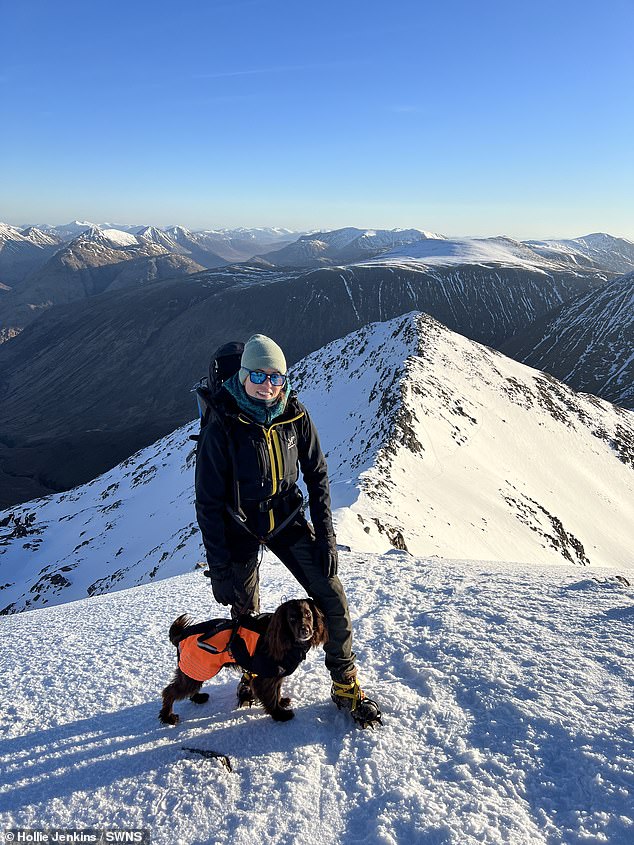 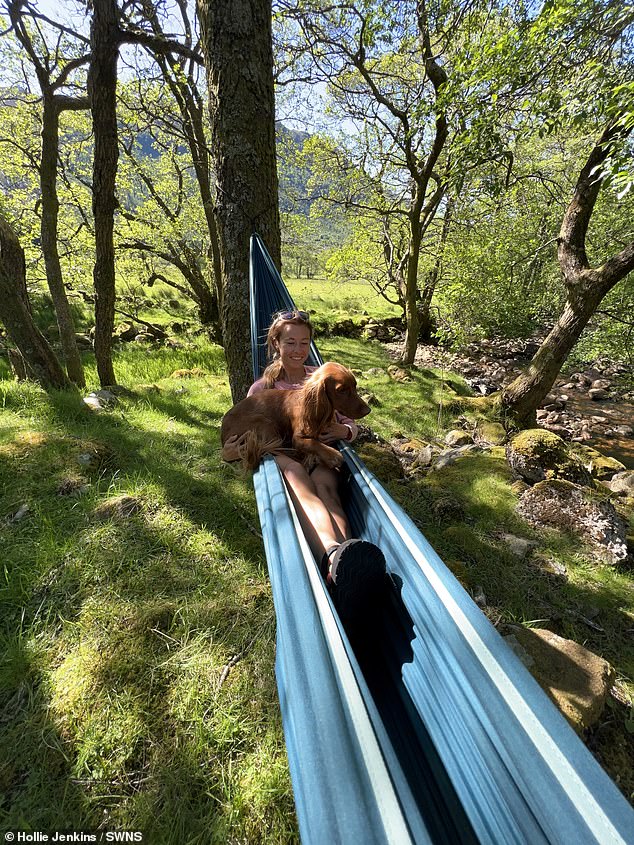 Ultimate Relaxation: Hollie brings a hammock to stretch at rest stops – and her dogs always want to jump in for a cuddle 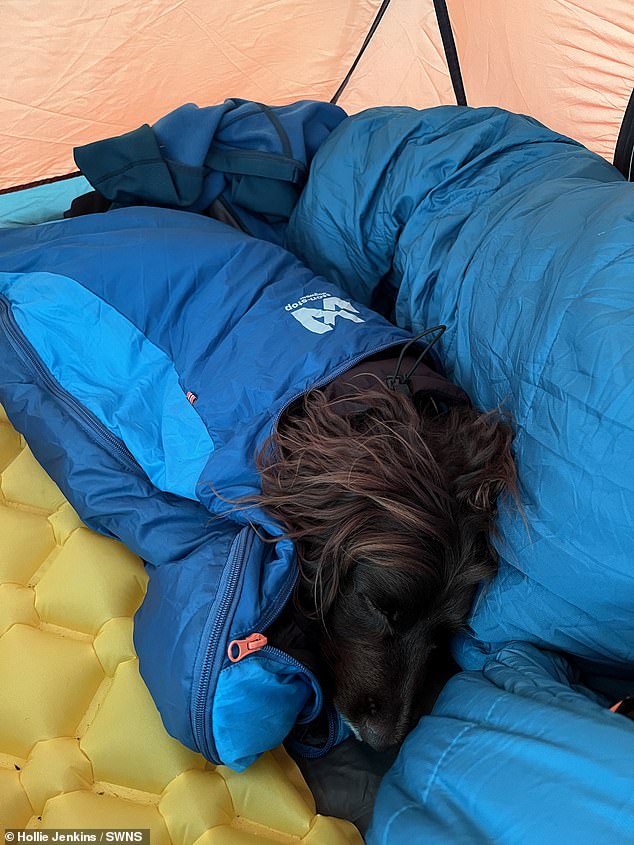 Snuggled up: Hugo and Spencer have their own padded sleeping bags when it gets colder

“They are really good and take care of themselves so well. We’ve figured it out now, I let them run around and run around but they know if I call them they have to come back.’

At the end of a long hike, the dogs love nothing more than to snuggle up in their sleeping bag with Hollie.

She continued: “Our normal half-hour to one-hour walks aren’t really enough now. They’ll know we’re going as soon as they see the camping gear coming out.’ 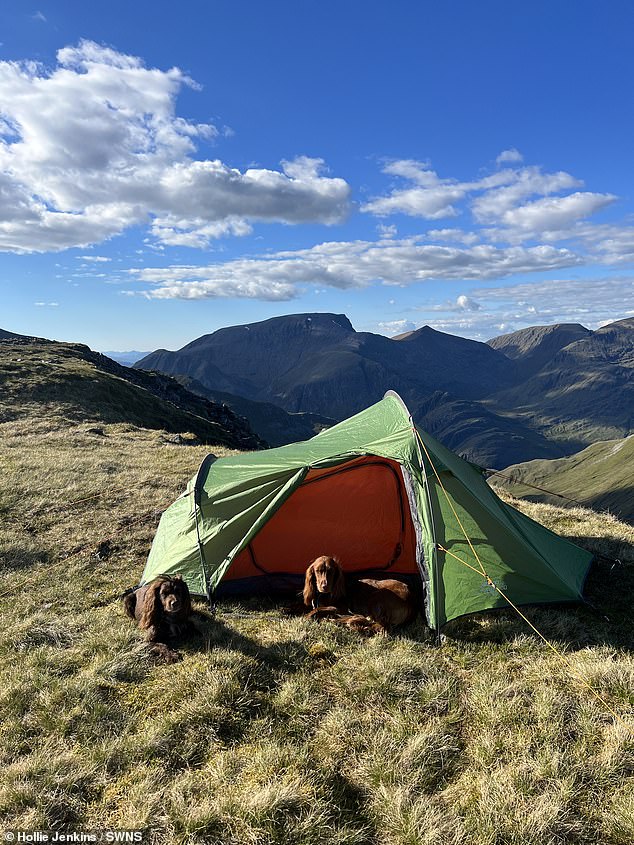 Natural beauty: Hugo and Spencer snapped while sunbathing during a break on one of the walks 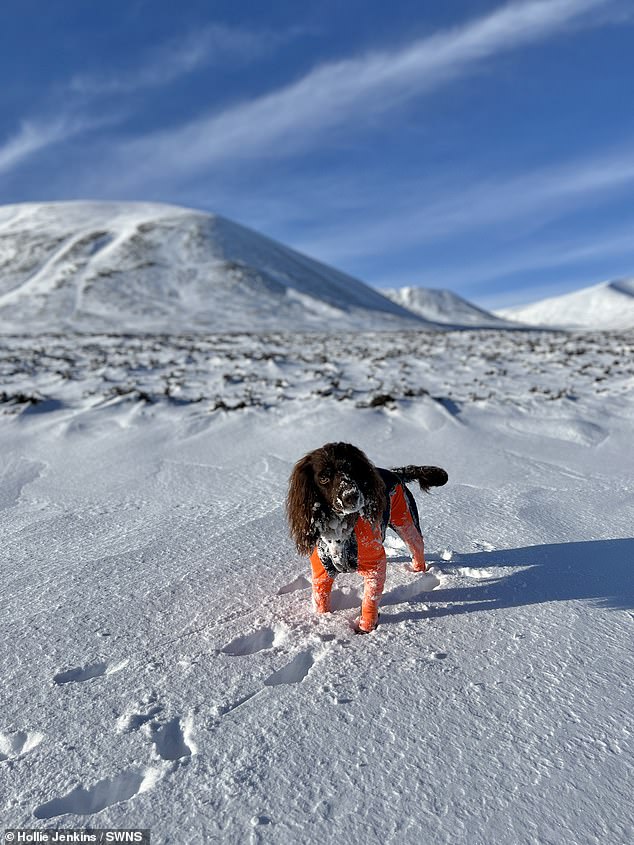 Ready to go! Spencer shows the winter boots that Hollie puts on her dogs in the snow 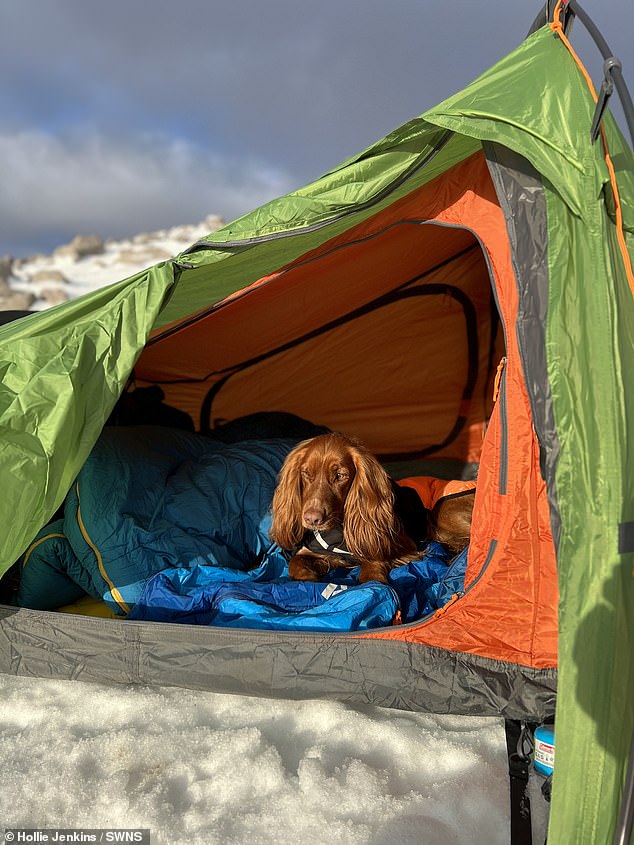 Social Media Stars: In just a year, Hollie has garnered more than 100,000 followers on her Instagram page (@theedinburghspaniels), which documents her adventures and shares dog-walking tips with other people

In just a year, Hollie has garnered more than 100,000 followers on her Instagram page (@theedinburghspaniels), which documents her adventures and shares dog-walking tips with other people.

Hollie said: “I feel safe wild camping with the dogs, it’s not something I’ve ever really worried about.

“Most of the time I’m the only person around at the top and when we’re camping on the ground they bark if anyone walks by the tent.

“I like to be out and about alone and just have time to think – it never gets boring with the dogs, they provide a lot of entertainment.” 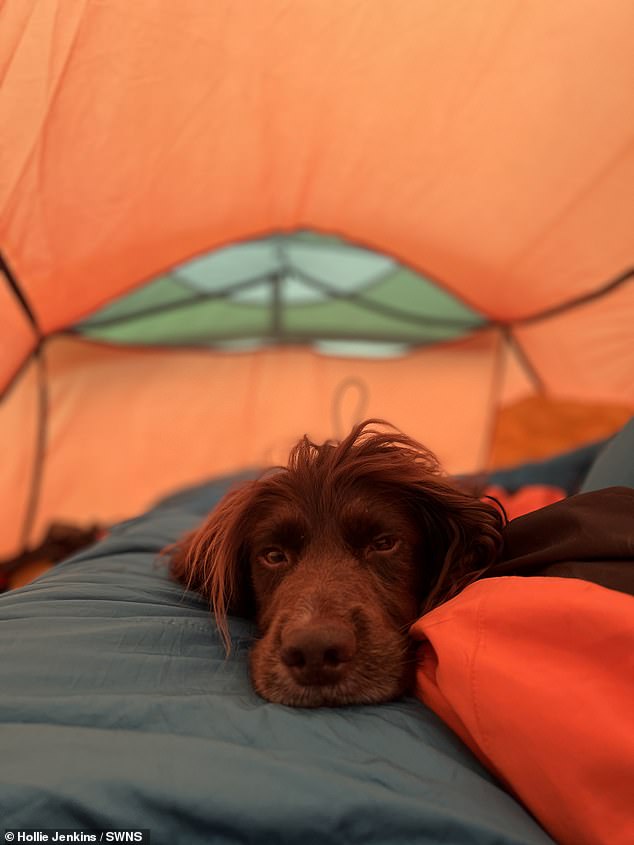 And relax! Spencer curls up in the tent with Hollie and Hugo at the end of a long day of hiking