It’s been an engrossing month with Test Rugby Ireland makes history in New Zealand, England shows real character to win in australia Wales is created with a lot of credit in the loss to South Africa, and Scotland suffers late heartache in Argentina.

But which people stand out? The Rugby Union Weekly team focuses on the four series involving the home nations Chris Jones and Ugo Money have chosen their starting XV – and bank – based on the last few weekends.

Hear them explain their choices on the latest episode of the podcast – and share your thoughts in the comments section at the bottom of this article. 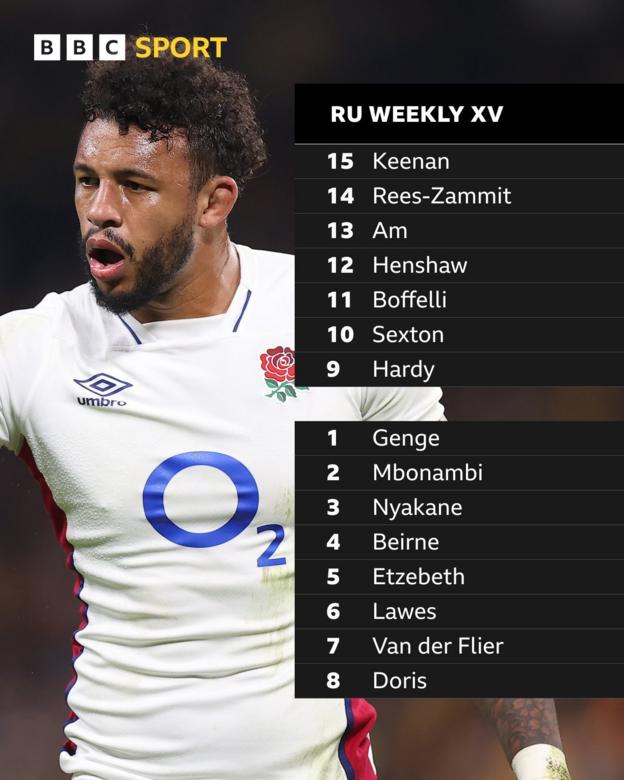 CJ: England’s Freddie Steward is incredibly unlucky to be missed but Hugo Keenan was one of Ireland’s best players in New Zealand.

Great Ireland full-back Rob Kearney said: “It’s his fitness, aerobic condition and pace of work that make him so impressive.”

A: After a disappointing Six Nations he was back at his best. He showed what a world-class finisher he is with limited ball and limited opportunities.

A: I think Am is phenomenal. He must be in our Start-XV. He’s brilliant.

CJ: After missing out on the Six Nations, George North looked back on his form for Wales, while Scotsman Mark Bennett has been very impressive after a tough couple of years and is our bench.

A: He’s nailed. He’s the domestic rugby player who just gets on with his job. Defensively he is so aggressive and in attack he fulfills the simple tasks. He rarely makes mistakes on either side of the ball.

CJ: Owen Farrell was Owen Farrell again in this series and that’s a huge compliment to the Englishman. But South Africa’s Damian Willemse can play 10, 12 or 15 and covers the back line on our bench.

A: If South Africa is benched 6/2, Willemse can be the new Frans Steyn. He was so impressive, scoring the winning goal in the first test and consistently excelling in different positions.

A: He kicked six of seven in the third Test and scored the winning attempt. I think he had a very, very good streak.

A: Led Ireland to a series win in New Zealand. Brilliantly played. Its importance and influence are undeniable.

A: I found this difficult. I think Ireland’s Jamison Gibson park was great, but when you think about the tactical discipline and repeated accuracy of Wales’ game plan, Kieran Hardy pulled it off. Englishman Jack van Poortvliet was a revelation and sits on our bench.

CJ: Van Poortvliet looked born the way and has passed Raffi Quirke and Harry Randall in the race for England’s long-term number ninth.

CJ: Not only did he set the tone in Brisbane, but when England were stumped in Sydney his possession of the ball propelled the team into action. He also gets a lot more variety in the crowd and deserves his place in first place. Ireland’s Andrew Porter scored twice in the second friendly against New Zealand and will give us a real look from the bench.

A: He’s inked for me. Try-scoring hero Ewan Ashman deserves a mention for his third Test performance for Scotland against Argentina, while England’s Jamie George and Wales’ Dewi Lake deserve a mention. But Dan Sheehan from Ireland is our back-up hooker after a superb run in New Zealand.

A: Tight-head prop in the second test, loose-head in the third. This is exceptional versatility and the Springbok scrum has been strong throughout the series. The ever-standout Tadhg Furlong is on the bench meaning we have a trio of Irish front rowers in reserve, while Wales’ Dillon Lewis, Scotsman Zander Fagerson and England’s Will Stuart all get nods.

CJ: A turnover machine, his interventions on the floor were always decisive. A great all-round player.

CJ: He won his 100th cap and was the only springbok to start all three Tests. He was awesome.

A: There are honorable mentions for Welsh duo Adam Beard and Will Rowlands, Irishman James Ryan and Englishman Jonny Hill.

A: How good was he? At the end of the game in Sydney he was on one knee knowing England had won. He couldn’t get up. There’s no better sight for teammates to see their captain doing exactly what he wants you all to do. He emptied the tank.

CJ: Ireland’s Peter O’Mahony is so unlucky to miss. He continues to do his best when the stakes are highest. Rory Darge has been outstanding for Scotland and continues his meteoric rise.

A: What a season he had. He’s world class. He scored the first try over the weekend and set the tone. It shows how he has played this season. But also a word about Tommy Reffell from Wales. Making your debut in South Africa and performing like him… what a streak he’s had.

CJ: Billy Vunipola’s resurgence is fundamental for England. For all the new blood coming through, one of the biggest boons for England is Vunipola getting back in shape.

A: Caelan Doris must be our number eight. A smart, dynamic ball carrier and in a position where you must face off against the All Blacks, he was so durable and consistent. Lawes is covering the lockdown so we can get Vunipola and Reffell on the 23rd.

CJ: Doris is the prototypical all-rounder of the modern back-row forward. A special athlete. Also worth mentioning is New Zealander Ardie Savea, who excelled in a losing game and is the All Blacks’ best player, and Scotsman Matt Fagerson, who is always improving.

If you are viewing this page on a BBC app please go here to comment.