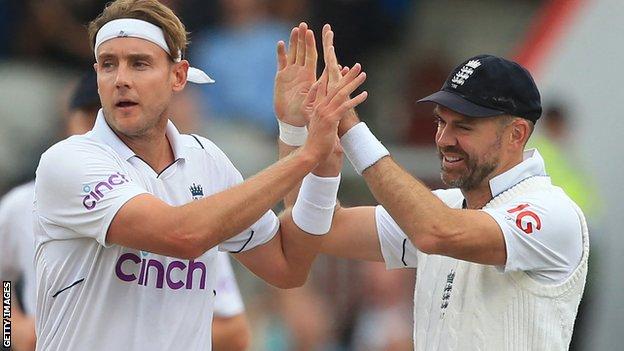 Veteran pace bowlers James Anderson and Stuart Broad have “their eyes on Ashes next summer”, according to England captain Ben Stokes.

Both were dropped for England’s West Indies tour in March but returned to play a key role in Stokes’ side winning five of their six Tests that summer.

Broad will turn 37 during the Ashes, while Anderson will turn almost 41.

“I honestly can’t see a point where they decide it’s time for them to step down,” Stokes said.

Anderson and Broad, England’s all-time leading wicket-taker, will line up for the crucial Test against South Africa at The Oval from Thursday.

“Jimmy came out and said how much fun he was having and Broady’s influence in the dressing room is the best I’ve seen playing with him over the years,” Stokes added.

“The conversations he’s had not just with me but with the other bowlers like he wants to help them and stuff like that took him to another level.”

England are expected to play just five Tests this winter – three in Pakistan in December and two in New Zealand in February.

Given the conditions in Pakistan, both Anderson and Broad could be used sparingly or not travel at all.

England will then play a Test against Ireland next summer before a bid to win back the Ashes from Australia in June and July.

If Anderson plays next summer, it would mark 20 years since his Test debut against Zimbabwe at Lord’s in 2003. He has won 664 wickets in 174 matches.

“It’s great to see Jimmy at 40 and Broady at 36 coming to life in the dressing room and honestly I can’t tell you when that will be,” Stokes said.

“We have the Ashes next summer and I’m pretty sure they have their eyes on that.”