Max Verstappen won the Azerbaijan Grand Prix and took control of the World Championship after an engine failure on Charles Leclerc’s Ferrari.

And it the impression that Ferrari’s season is falling apart after such a promising start, as Leclerc’s team-mate Carlos Sainz also failed to finish following a hydraulic failure.

‘It is more than significant. I don’t really have the words’

Leclerc immediately lost the advantage he had earned with a dazzling pole position lap as Perez dived for the inside into Turn One after a good start.

The Ferrari then came under pressure from Verstappen, but was able to hold the Dutchman off until a virtual safety car period on lap nine caused by Sainz parking up in a run-off area.

Ferrari leapt on the opportunity to pit for fresh tires, which Red Bull did not, hoping that it would vault Leclerc into the lead – which a few laps later it did.

As Leclerc dropped briefly down to third following his stop, Verstappen soon closed in on Perez and passed for the lead on lap 15, after the Mexican was told “no fighting”. Perez stopped the next time around, and Verstappen two laps later.

After the Red Bull drivers’ stops, the race looked set to boil down to whether Leclerc, in the lead, could hold off the challenge of the Red Bulls, who would have a significant grip advantage.

And that question would have been made all the more intriguing by a second virtual safety car when Kevin Magnussen’s Haas failed a failure in his Ferrari engine.

But by the time the Dane pulled off, Leclerc was long out of the race, a cloud of smoke erupting behind his car towards the end of lap 21.

“I am more than frustrated,” Leclerc said. “The first stint we weren’t particularly strong at the beginning but then I was catching back Checo. I think pitting was the right choice. We were leading and then I was managing the tires well. We just had to manage the tires to the end and we were in the best position to do that. Another DNF. It hurts.

“It is more than significant. I don’t really have the words. It is just a huge disappointment and I hope we can jump back from it and be on top of those things.”

From that moment on, Red Bull were in total control. Verstappen comfortably had the measure of Perez and the two cars cruised to the flag. 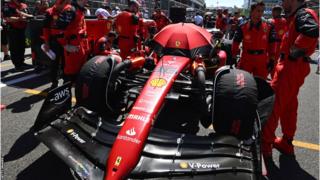 Russell had a lonely race, inhering fourth place when Sainz retired and then third after Leclerc went out, to keep up his record of being the only driver to finish in the top five in every race this season in his first year with Mercedes..

The two Mercedes drivers stopped together under the first virtual safety car, and the slight delay to Hamilton, who was forced to wait behind his team-mate, meant he dropped back to 11th place.

He inherited a place when Aston Martin’s Sebastian Vettel ran wide trying to pass Esteban Ocon’s Alpine, who Hamilton then passed a few laps after.

Hamilton then had to pass both Alpha Tauris of Yuki Tsunoda and Pierre Gasly to take a well-earned result, despite complaining that the car’s bouncing on the straights was “killing my back”.

Gasly took fifth, followed by Vettel, Alpine’s Fernando Alonso, the McLarens of Daniel Ricciardo and Lando Norris – who were together for much of the race on different strategies and had a bit of radio needle as to who should be allowed to pass who – and ocon.

F1 flies a third of the way around the world to Montreal, for the sport’s first Canadian Grand Prix since 2019, after the popular race dropped off the calendar as a result of the pandemic.