‘Get off the train’: Moment an angry London woman pushes TWO male thugs off a tube as they attempt to pull their intended victim off the Central Line train

Through Mark Duel for MailOnline

** Do you know someone in this video? Email tips@dailymail.com **

This is the moment a woman caught in the middle of a breakdown on a London Underground yelled at two thugs before pushing them both away.

The woman shouted at the two men: “Do you want to get off the train, get off” from aboard the Central Line carriage at Tottenham Court Road station in the West End.

Her intervention – which prompted one of the men to tell her to “shut up” – came after the couple blocked the doors while threatening to “hit” her by a third man who committed some form of confrontation with them was involved.

The Twitter user who filmed the clip said the argument started when the man in the white t-shirt glared at the third man – and the third man then asked if he was gay. 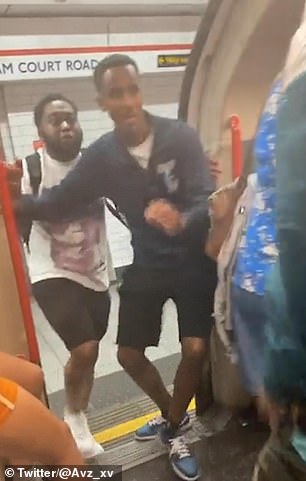 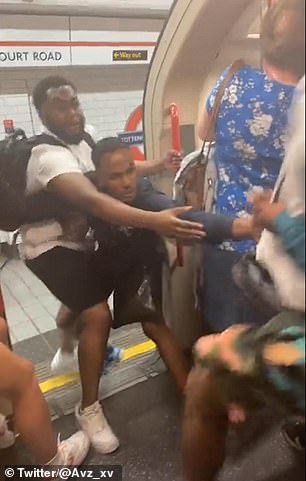 The duo appeared to be attempting to pull the third man off the train, while the woman standing at the door tried to mind her own business as the doors began to close.

One of the two men then yelled at the third man, ‘Are you crazy, never do that?’ and the second said to him, ‘Come off the train, I’ll smack you.’

And the woman then had to intervene, yelling at the two men and pushing them away as they stumbled back onto the platform yelling “shut up”.

The video was posted to social media around noon yesterday by Twitter user @Avz_xv, who said: “Grandma didn’t have it. I was too tired to laugh.” 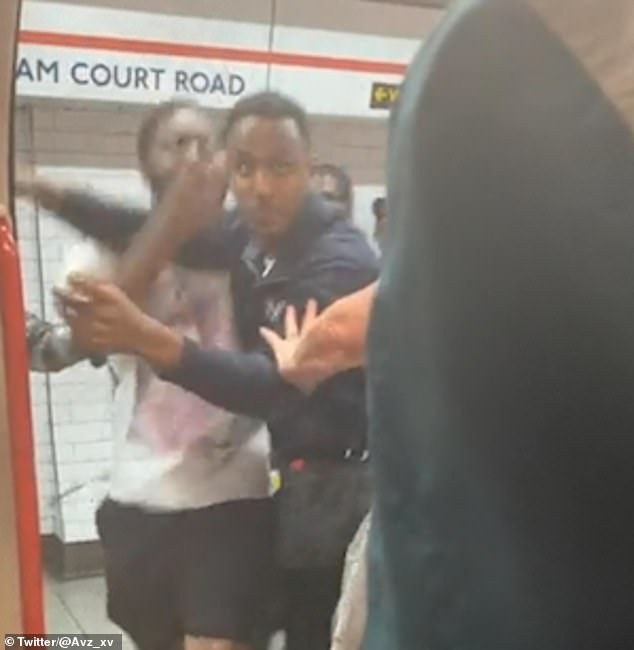 The woman intervenes, yelling at the men, “Are you going to get off the train?” before pushing them off

Under the clip, @Avz_xv said the man in the white t-shirt stared at the third man – and then the third man “asked if he was gay and it escalated from there.”

A response to the video read: “He told the elderly woman to shut up and that’s why we have crazy problems in the community. The respect is gone, prankster.’

The Twitter user who posted the clip responded to this comment, saying, “It’s true, but I really don’t think it bothered her how she pushed them away.”

@Avz_xv also said ‘Let me die how she pushed her.’ MailOnline has contacted the UK Transport Police for more information.

** Do you know someone in this video? Email tips@dailymail.com **