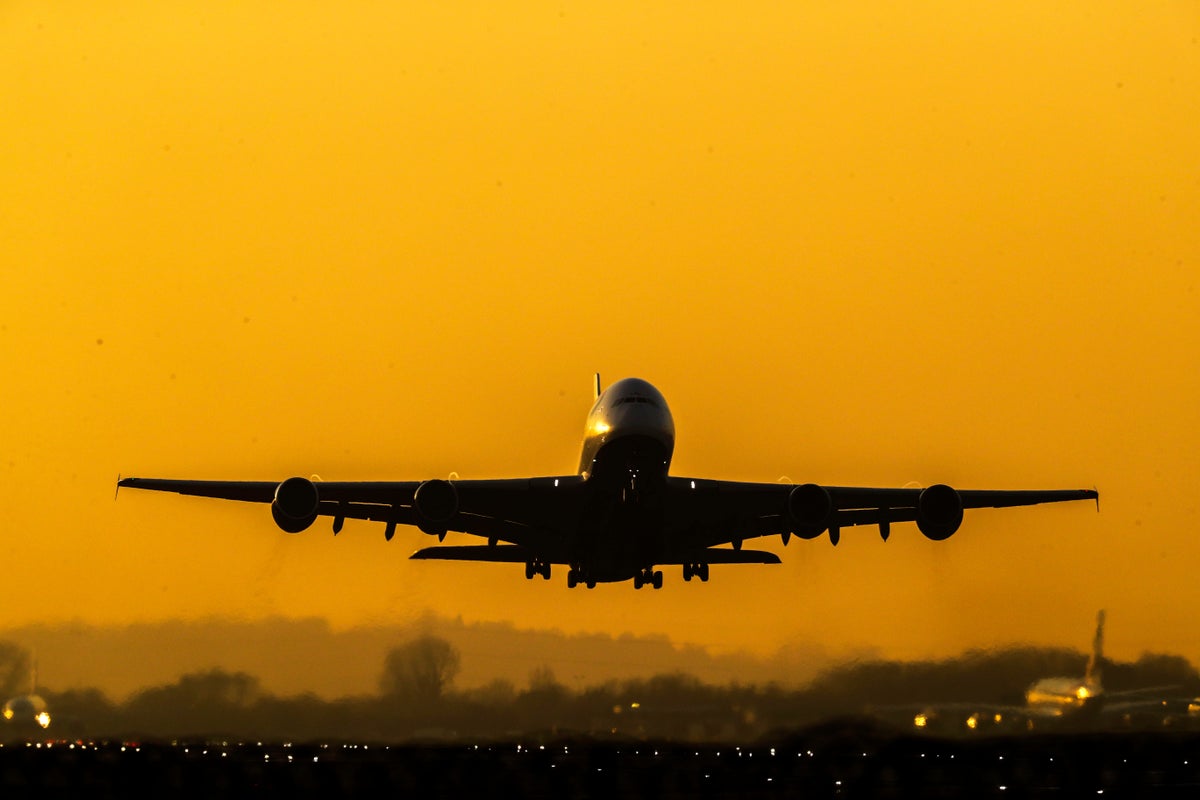 THere is an exquisite kind of irony in the government publishing theirs “Jet Zero” strategyoutlining how it will “reach net zero aviation and deliver debt-free flying‘, the same day Britain will reach its highest temperature on record, and with Europe is literally burning amidst raging forest fires.

None but the most die-hard climate change deniers can continue to ignore the fact that the world is heating up at an alarming rate; The evidence is right in front of us, written in huge, conspicuous letters in the rising mercury. And yet this latest report from the Department of Transportthat talks excitedly about “cutting-edge industries,” “new technologies,” and “new infrastructure” — even opening it with the phrase “the sky’s the limit” — has its head so deep in the sand that it’s practically reaching the molten core of the earth ( which is currently only marginally hotter than central London).

Because amidst all the six-point plan’s shrill-sounding techno-fixes like “zero emissions aircraft” and the impressive-sounding investment – of £165m for an Advanced Fuels Fund to develop a domestic Sustainable Aviation Fuels Industry (SAF ) – the strategy seems to be missing a keyword: reduce.

There is not a single mention of reducing the number of planes in the sky or the number of flights operated. And the simple fact is, every year we need to fly less to reach net-zero carbon emissions by 2050.

“Instead of a pragmatic plan to completely wean the airline industry off fossil fuels, it allows the sector to continue polluting with impunity for the next 30 years,” says Matt Finch, UK director of green group Transport & Environment (T&E), of the report . “While there are some good signings, it will go down in history as a missed opportunity.”

Tim Johnson, director of the Aviation Environment Federation (AEF), adds: “Ministers are not honest about what it takes to achieve net zero flying. The strategy avoids answering the tough questions like the need to fly less and stopping airport expansion.”

The report commits to the goal of “ensuring emissions do not exceed 2019 levels,” which is at least a start.

But every “solution” outlined in Jet Zero – improving the efficiency of aircraft and airspace use, developing SAFs, investing in zero-carbon aircraft using electricity and hydrogen, developing carbon markets and greenhouse gas removal technologies – none of which will only begin to touch the sides.

Here’s the bare truth: SAFs, which still emit as much carbon in flight as regular kerosene, but potentially emit less carbon or even remove it during the production process, cannot be manufactured anywhere near on the scale required for the number of flights is what we do. As Cait Hewitt, Policy Director at AEF points out: “To produce enough synthetic e-fuel to meet the UK aviation sector’s existing kerosene needs would require an offshore wind farm the size of Northern Ireland”.

The government has formulated a SAF mandate that requires “at least 10 percent of jet fuel to be from sustainable sources by 2030” – still ambitious given the small capacity we have, but even if that target is met, 90 percent of fuel consumption will be the normal stuff. In addition, according to T&E, “not all SAFs are created equal and it is important to use the most sustainable ones”.

Zero-emission aircraft, “aiming to have zero-emission routes connecting places across the UK by 2030”? Sure, that sounds sexy and exciting. But realistically, the barriers of infrastructure, cost, and inherent limiting factors in the technology itself mean that these new aircraft types are unlikely to fly commercially for the next decade – and if they do, they will only be suitable for domestic flight or very short hops and likely only able to carry a small number of passengers at a time. “Commercial electric or hydrogen aircraft won’t be seen until 2035, and even then it will likely be small regional aircraft operating on short routes,” says AEF. Even if the target is met, according to T&E, UK aviation will still burn half the fossil fuels it currently uses in 2050 (about 19 million tonnes), which in their words “simply isn’t good enough for a climate emergency”.

Improving efficiency within the existing framework and technology we have is the easiest step – the Government has pledged to “improve fuel efficiency by 2 per cent every year” and “a further £3.7m in support in 2022/23.” of airports are modernizing their airspace” – and that’s all well and good. But here, too, the emissions saved will be negligible and will never compensate for the ever-growing number of flights.

And then there is “the development of carbon markets and greenhouse gas removal technologies to drive decarbonization and offset any residual emissions.” Essentially offsetting – an area so complex and problematic that I won’t even attempt to delve into it here. But what I’m saying is this: To achieve net zero, the only “offsets” that can remain are carbon removals, where a system literally scrubs carbon out of the atmosphere. The capacity for this type of technology is limited – either because it consumes enormous amounts of energy or land – and therefore must be used responsibly for the emissions generated absolutely necessary within our society. Unlimited recreational flying is unfortunately not.

Other outlined goals hardly seem worth mentioning – for example, “providing consumers with better information so they can make sustainable flying decisions” is ridiculous given that it is the case are currently no “sustainable” flight decisions. The aim should be to educate people so that they can make things more sustainable to travel decisions, surely? Highlight the carbon savings by traveling by train or bus instead?

And the last nonsensical bullet point: “Increasing our understanding of the non-CO2 impacts of aviation, such as contrails and nitrogen oxides”. The report claims that “the implications of this remain uncertain, so we will work closely with academia and industry to monitor global developments in this area.” Further research is of course always welcome – but as early as 1999 a special report by the Intergovernmental Panel on Climate Change (IPCC) estimated that the total historical impact of aviation on climate, taking into account non-CO2 emissions – such as water vapour, aerosols, nitrogen oxides etc. – was two to four times higher than when considering CO2 alone.

We already know that short-haul flights add an additional 121kg of CO2e (carbon dioxide equivalent) per kilometer when you factor in these other emissions, while long-haul flights add an additional 93g more per kilometer. To say that we “don’t know” their impact and just need to “keep a little eye on it” — rather than taking action now — seems to me to be setting the bar extraordinarily low.

I know this might all sound like doom and gloom on my part. I know people don’t always want to hear it. But there is no escaping the reality: aviation cannot be decarbonized at the scale or speed it takes to make a real impact. As Alethea Warrington, campaigner for Climate Aid Possible, puts it: “The strategy relies heavily on undeveloped, extremely expensive or impractical technology and fails critically by omitting a policy to fairly reduce flight demand, such as a frequent flyer fee.”

We need to fly less, not more, in the coming years and decades to reach net zero. A strategy that doesn’t mention this – or even limits the growth of aviation and ensures that there are no more flights from year to year – is no strategy at all.

“Zero Altitude: How I Learned to Fly Less and Travel More” by Helen Coffey is available now, published by Flint (flintbooks.co.uk; £16.99 hardcover).