Vegan Extremists have struck again, this time targeting upscale shops across the country while their activists scoop milk off shelves and dump it over floors and counters.

Animal Rebellion have dubbed their protests against animal products ‘Milk Pours’ and have posted videos of themselves at Harrods in the West LondonFortnum & Mason in Piccadilly and a Waitrose in Edinburgh.

The young and well-dressed eco-hipsters made sure to make their strident demands on the government on Saturday lunchtime to ensure farmers’ transition to a ‘plant-based future’.

The group coordinated the actions at several stores including Waitrose, Whole Foods and Marks and Spencer across the country including in London, Norwich, Manchester and Edinburgh while horrified Saturday shoppers looked on. 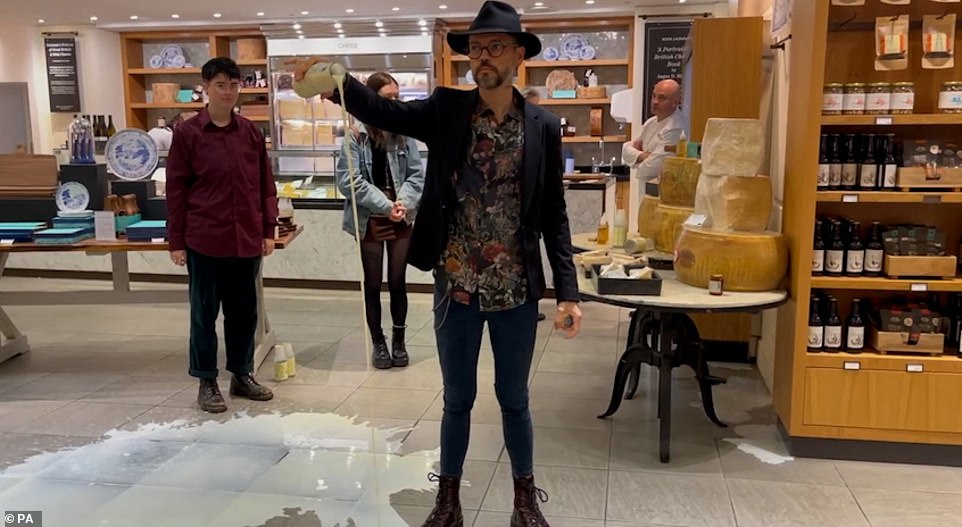 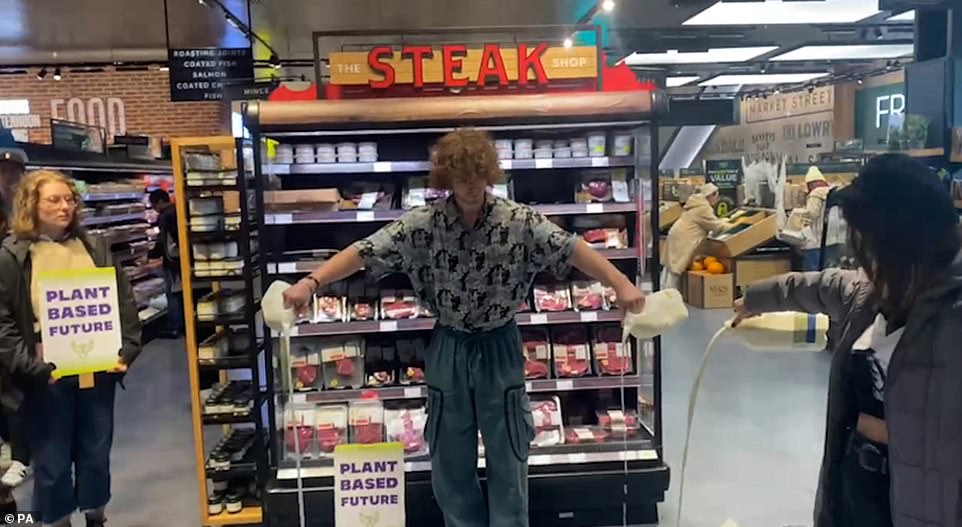 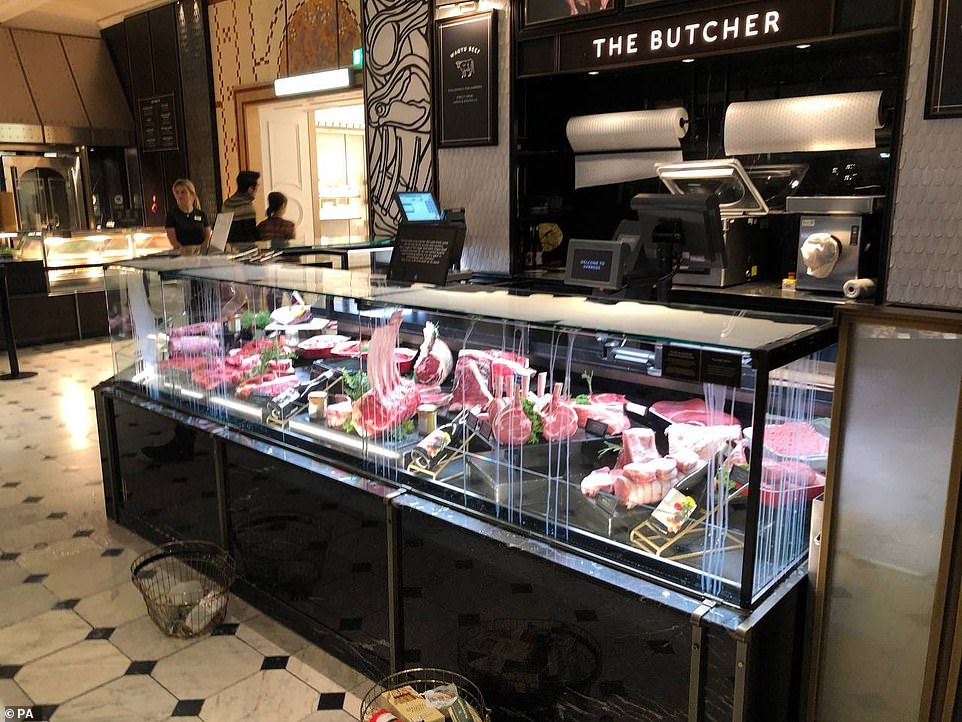 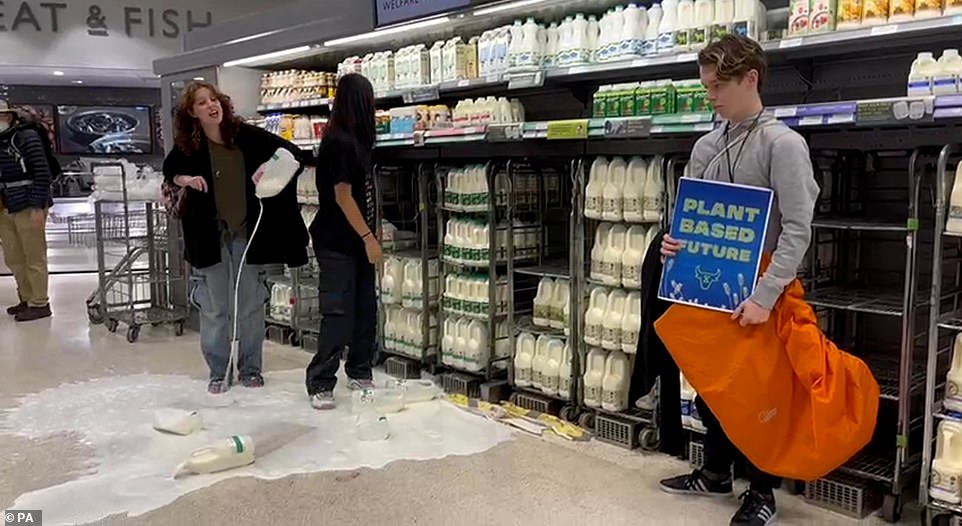 Hitting a Waitrose in Edinburgh, the eco-mob targeted upmarket businesses as they demanded the transition to a plant-based future 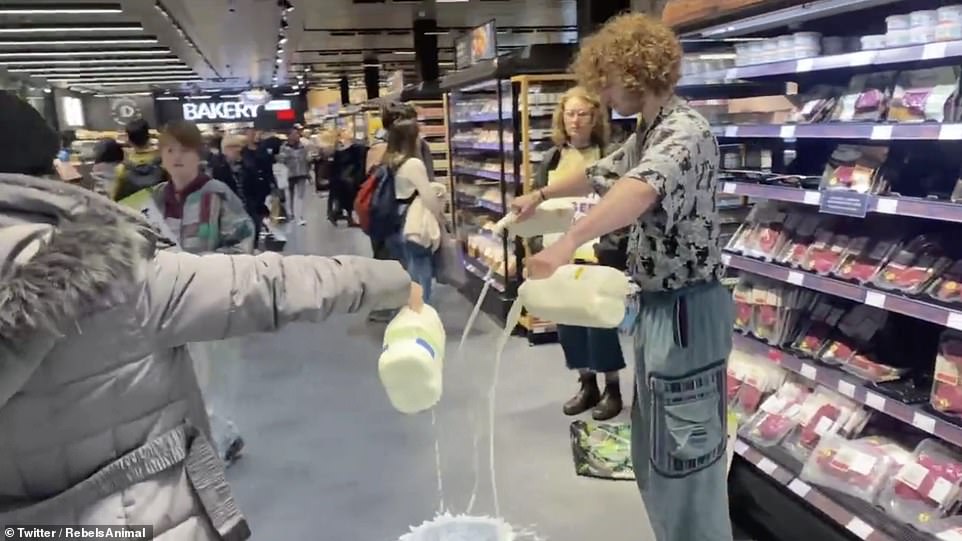 The meat counter at Harrods was attacked by eco-mobs, while Fortnum & Mason – two of London’s poshest shops – had its cheese counter vandalized.

Animal Rebellion said it is calling for a plant-based future and stressed the need to support farmers in the transition to a sustainable plant-based food system.

Skylar Sharples, a graduate of the International Development University of Sussex from Bristol and one of the Harrods protesters, said: “Animal Rebellion supporters are reappearing because (Prime Minister) Liz Truss and Ranil Jayawardena (Foreign Secretary for Environment, Food and Rural Affairs) decide again ignoring calls to build a better future.

“A plant-based future would offer us all a beautiful world where nature and life thrive.

“The steps to adequately support farmers in this transition must begin now.” 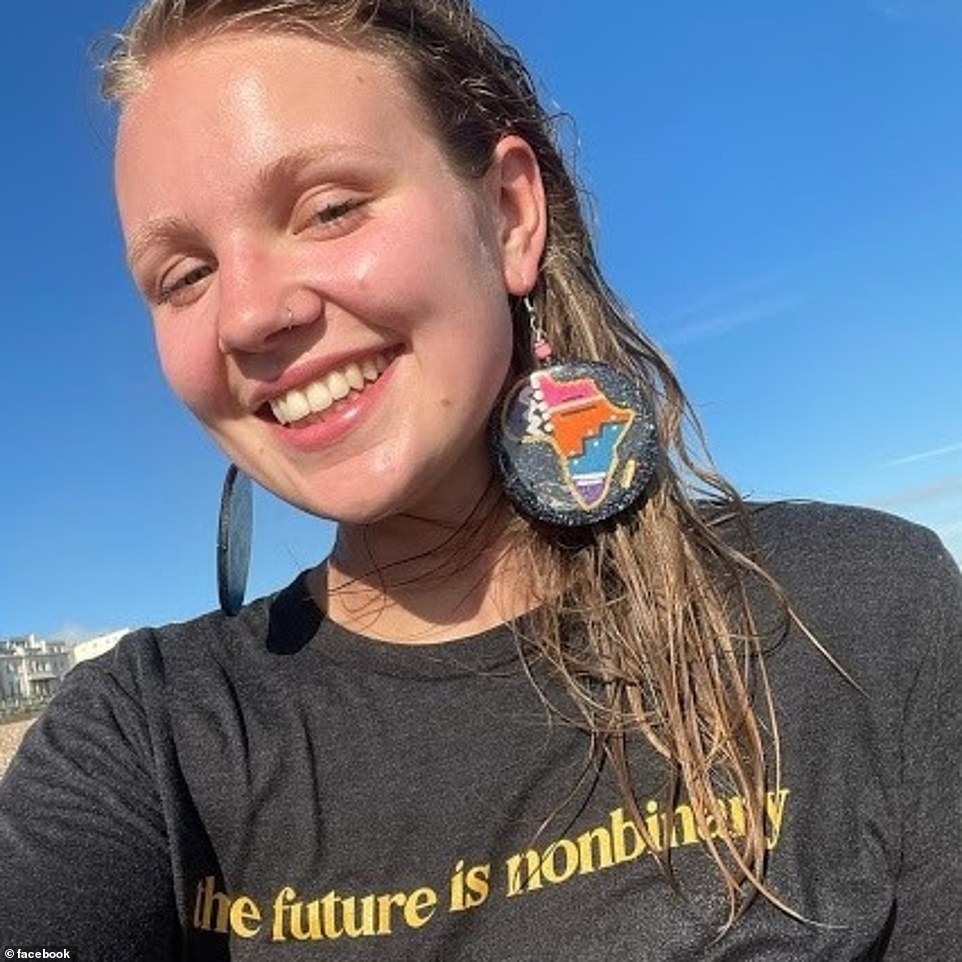 Skylar Sharples (pictured), an international development graduate from Bristol and one of the Harrods protesters, said: “Supporters of Animal Rebellion are reappearing because (Prime Minister) Liz Truss and Ranil Jayawardena (Secretary of State for Environment, Food and Rural Affairs Affairs) once again choose to ignore calls to build a better future 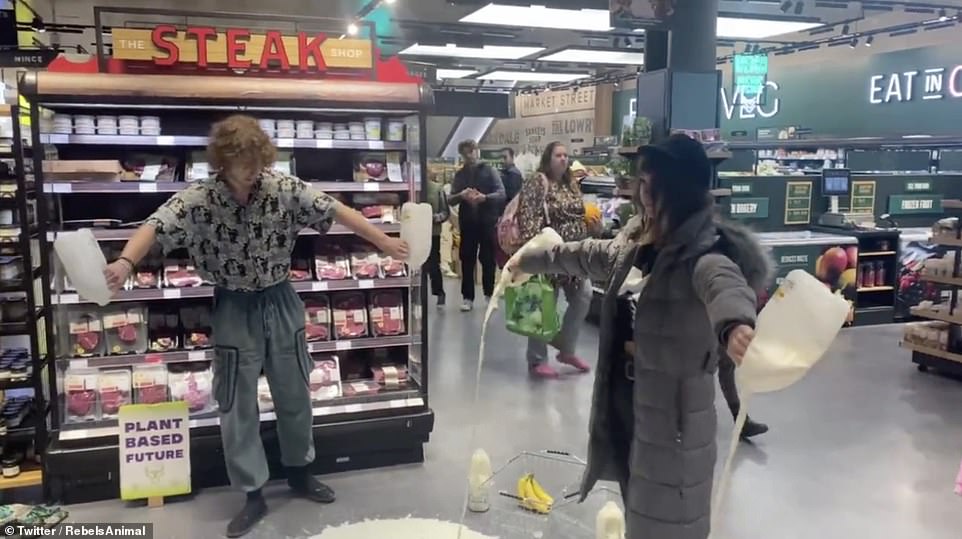 Milk pours occurred at Marks and Spencer’s in Manchester on Market Street, next to the steak section 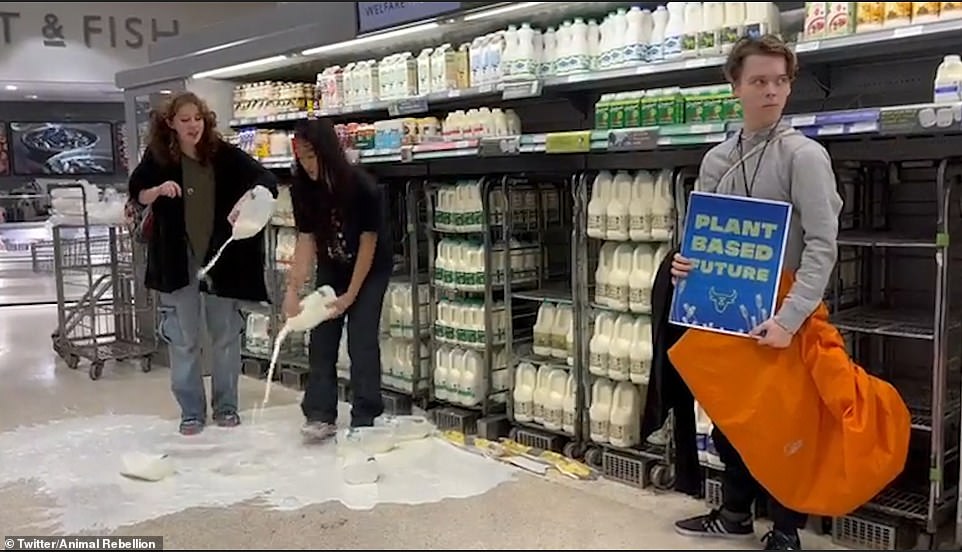 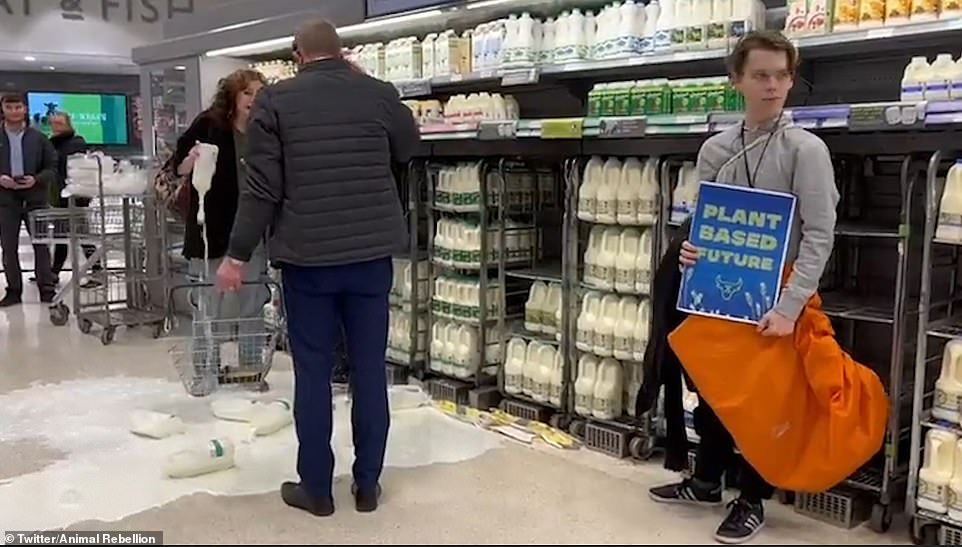 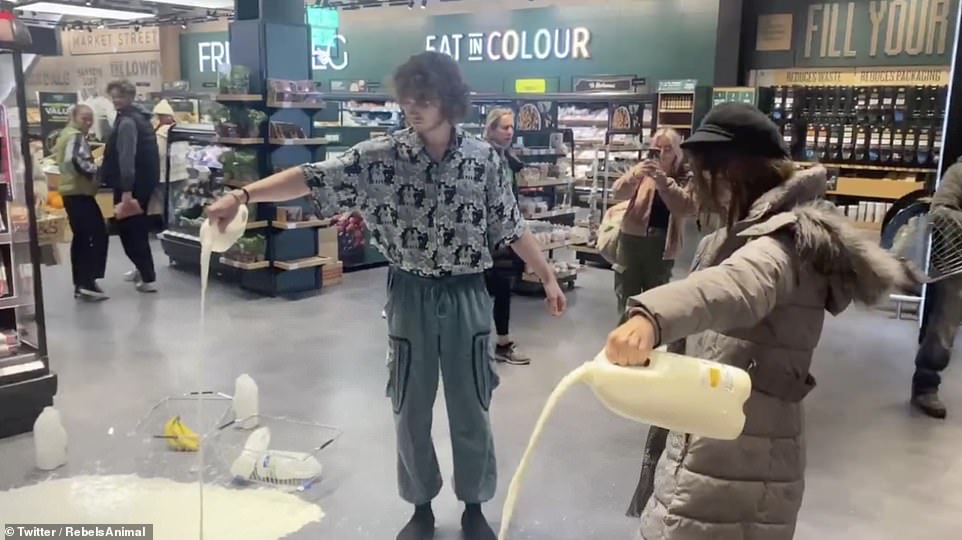 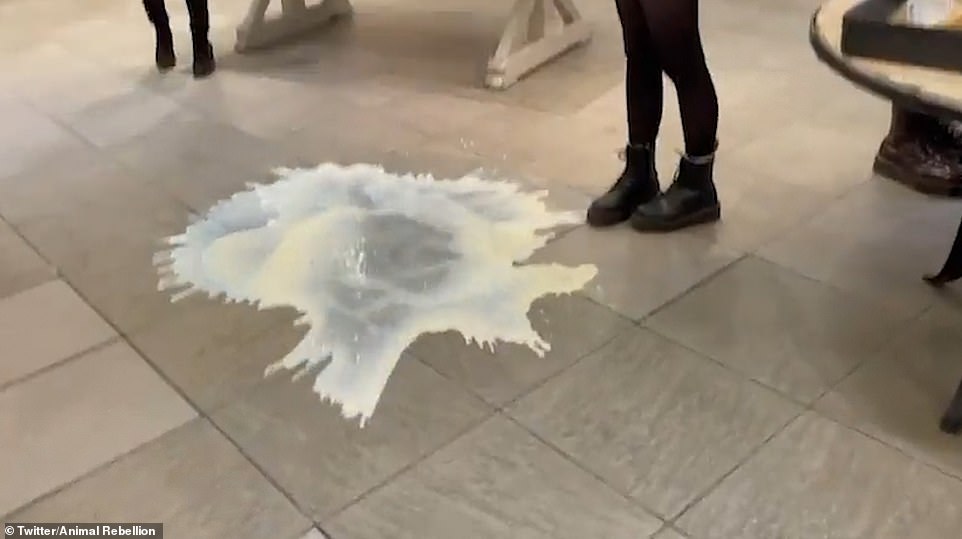 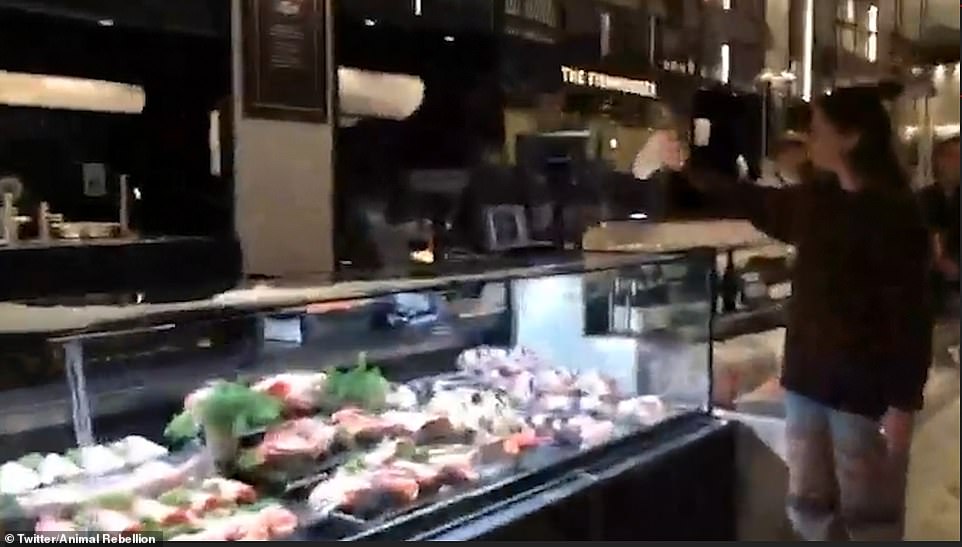 The meat counter at Harrods was attacked by eco-mobs, while Fortnum & Mason – two of London’s poshest shops – had its cheese counter vandalized

Lou Hadden, a Herefordshire charity worker who joined the campaign at Fortnum and Mason, said: “This is not how I imagined my weekend to be.

“Unfortunately, this hiatus is necessary to get those in power to listen to academics at Oxford, Harvard and the IPCC (Intergovernmental Panel on Climate Change).

“The world’s top climate and agricultural scientists are calling for a transition to a plant-based food system.

“We need bold and determined politics at this point, not the horror show we’re seeing right now.”

“Milk Pours are happening across the UK at the moment. All are concerned individuals calling on the government to give us a future worth living, a #PlantBasedFuture,” Animal Rebellion tweeted this afternoon. 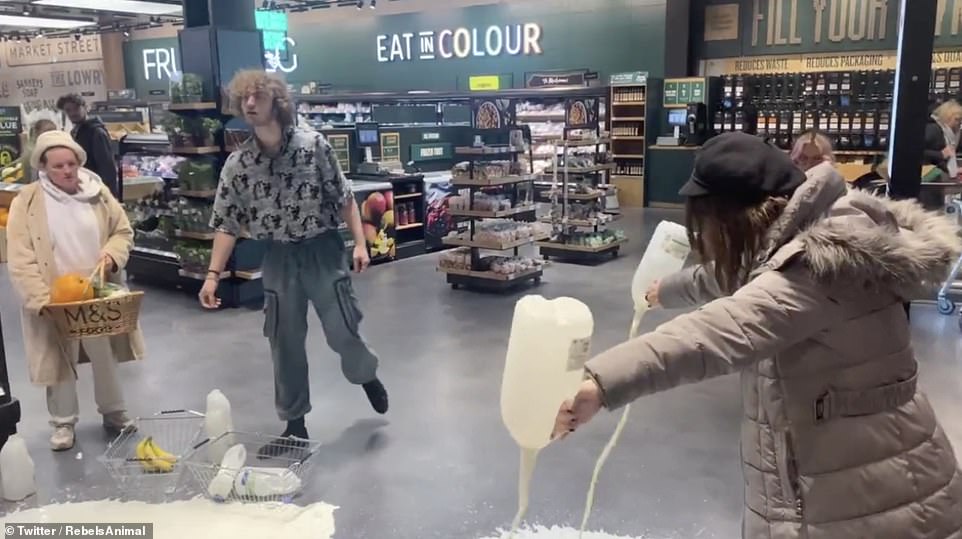 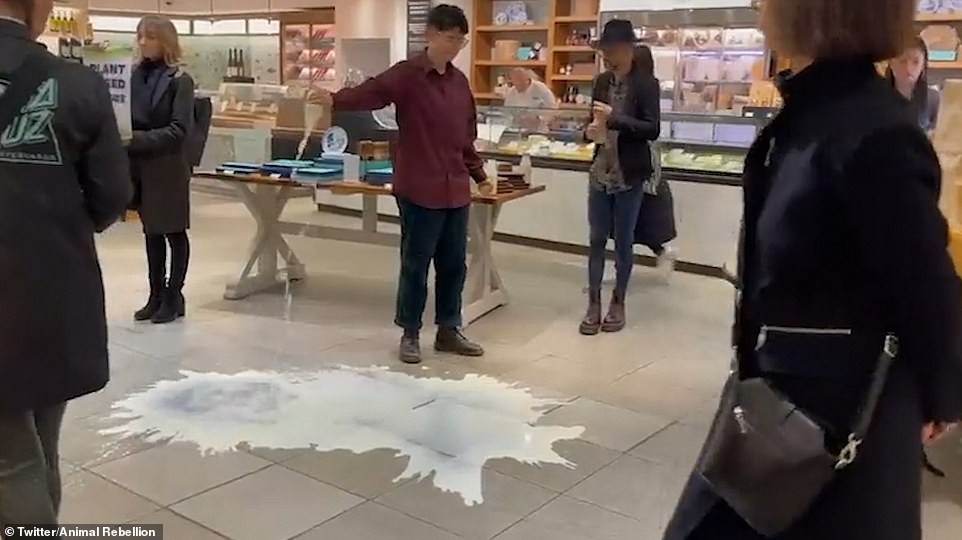 Protesters raid the cheese department at upscale Fortnum & Mason’s in Piccadilly, grabbing milk and pouring it on the store floor 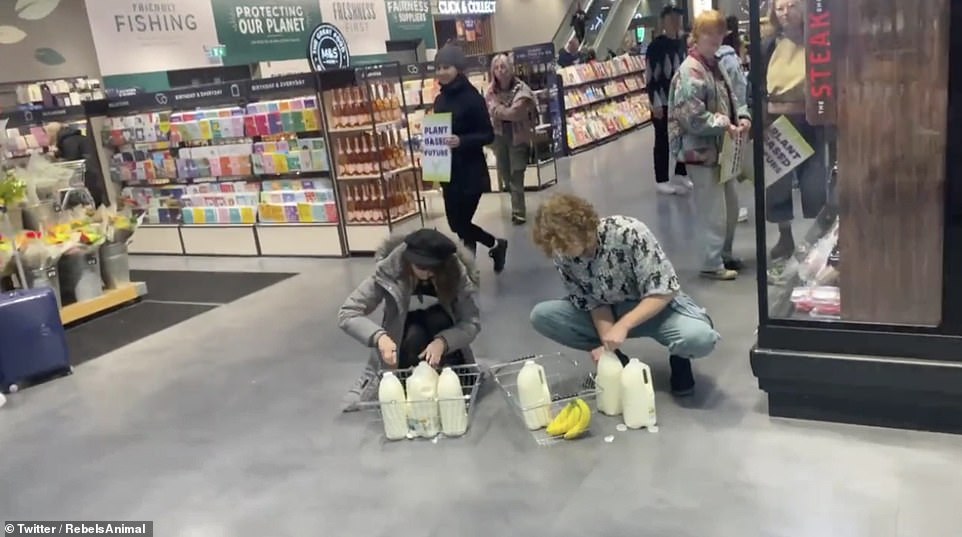 “Animal Rebellion supporters have just poured milk over the floor and other dairy products at Fortnum & Mason, Piccadilly,” came another tweet.

“We call on the government to support farmers in the transition to a plant-based food system.”

“Dairy companies are responsible for most of the methane emissions,” shouted one protester as she eagerly poured milk on the floor in the Waitrose milk aisle.

She was interrupted by a passer-by who confronted her.

“We’re all about peaceful protests and non-violence, we’re just calling out the injustice of the industry,” she tells the man before continuing her tirade.

The same group slammed Fortnum & Masons just two weeks ago when activists from the group sparked fury by dousing two high-end products with milk London Department stores in a protest against dairy products.

4 months ago
Manchester United’s Mason Greenwood has been charged with attempted rape, behavior control and assault