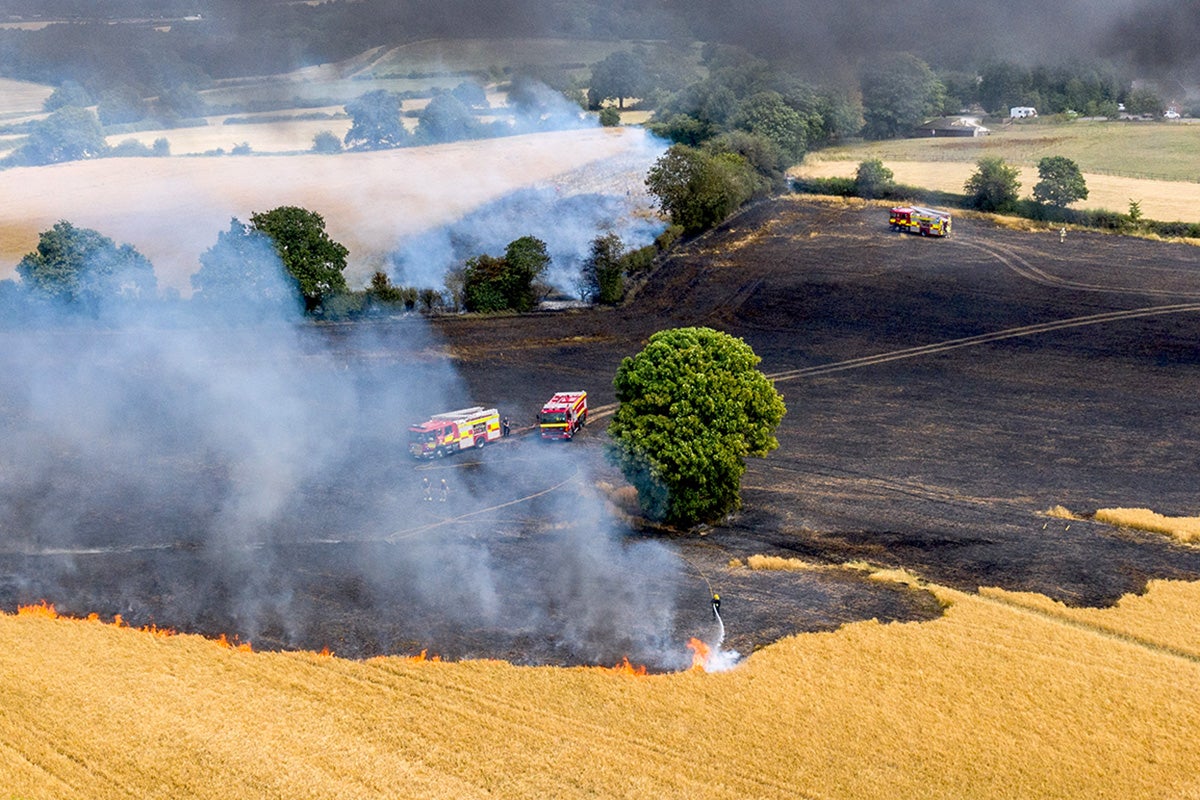 UK hot weather: How to stay cool in a heatwave

Britain is forecast to see its hottest day on record on Tuesday in the country’s first-ever national heat emergency.

Monday night was expected to be the warmest night ever with highs in the mid-20s in parts, while the rising sun is expected to bring temperatures up to 41C in Yorkshire and 40C in London.

The Met Office said some models even forecast highs of 43C – well above the previous record of 38.7C, recorded in 2019.

Met Office meteorologist Luke Miall said: “I’ve been a qualified meteorologist for 10 years, and telling people about 41C in the UK doesn’t seem real … It’s been quite an eye-opener to climate change with all these temperatures in the UK.”

Dozens of schools have closed for Tuesday while others cancelled sports days, school trips and detentions, and relaxed uniform codes.

Health authorities have urged people to stay inside during the hottest period of the day, between 11am and 4pm, and wear sun cream, a hat, stay in the shade and keep hydrated with water.

Network Rail said the number of passengers using major stations across Britain on Monday was around 20 per cent down on one week ago, as people were warned to avoid public transport in the extreme heat.

Road traffic was also down, with location technology firm TomTom saying congestion at 9am was lower in most UK cities than at the same time last week.

Transport for London said fewer people were using the Tube and bus services, down 18 per cent and 10 per cent on last Monday respectively.

Train speed restrictions imposed by Network Rail to reduce the chances of tracks buckling in the heatwave caused delays and cancellations.

Many operators were running a heavily reduced timetable on Monday and will do so on Tuesday, including Avanti West Coast, CrossCountry, Great Northern and Thameslink.

RAF stops flights to Brize Norton as ‘runway has melted’

The RAF has halted flights in and out of its biggest airbase after the runway reportedly melted on a day of extremely hot weather.

RAF Brize Norton in Oxfordshire was forced to divert traffic to other airfields due to safety concerns, a spokesperson said.

A source told Sky News the decision was taken on Monday morning because the runway’s tarmac had melted in the heat.

In a statement the RAF confirmed flights were being sent elsewhere as they could not take off safely from Brize Norton.

The air force said the diversions had not interfered with military business.

“During this period of extreme temperature flight safety remains the RAF’s top priority, so aircraft are using alternative airfields in line with a long-established plan. This means there is no impact on RAF operations,” the statement said.

Brize Norton sits in the area of Britain on red alert for extreme heat on Monday and Tuesday, with temperatures on Monday expected to peak at 35C.

RAF stops flights to Brize Norton as ‘runway has melted’

This is the caption of a post which has gone viral on social media showing two maps of the UK – one purportedly during a previous spell of hot weather, and one apparently ahead of the current record heatwave.

However, the comparison has drawn ire from the Met Office meteorologist who designed the current heat maps being used.

Aidan McGivern told The Independent the post was “incredibly frustrating”, and said the image on the right, supposedly of a recent forecast, was doctored.

“This misinformation detracts from the Met Office’s forecasts, warnings and advice on how to stay safe during what is actually an unprecedented spell of extreme temperatures,” he said.

He also explained why the heat scale colours had been updated last year.

Experts are worried about the possibility of major wildfires tearing through the countryside as temperatures threaten to soar as high as 40C.

Wildlife would be “devastated” by such a blaze, with one expert suggesting Britain could face conditions similar to those taking hold in southern Europe.

Patches of England were at “exceptional risk” of wildfires on Monday, the Met Office said, with an alert spreading to most of the country for Tuesday.

“I haven’t even seen the exceptional category being used in the times I’ve looked at the Wildfire Index before,” Kathryn Brown, the Wildlife Trust’s director for climate action, said.

“In southern Europe, we’re seeing these stories of these horrendous wildfires taking hold all over the place and these are the conditions that we’re going to be more prone to.

Blazes across France, Spain, Portugal and Greece have levelled thousands of acres of land and forced the evacuation of locals and holidaymakers.

The National Trust has warned against lighting barbecues or campfires in open countryside and dropping litter such as glass bottles.

Fourteen-year-old boy thought to have drowned in Thames

A 14-year-old boy is missing and is believed to have drowned after getting into difficulty in the River Thames in west London.

Emergency services and the government have reiterated urgent warnings about the dangers of trying to keep cool after several tragedies in waterways and reservoirs during the heatwave.

At just before 5pm on Monday, the Metropolitan Police were alerted by London Ambulance Service to reports that a child had entered the water at Tagg’s Island in Hampton, Richmond.

Despite a search by officers, paramedics, London Fire Brigade and members of the public, efforts to find the boy were unsuccessful and the rescue operation was brought to an end at 6.40pm.

Efforts to recover his body will continue into the evening, with the boy‘s next of kin aware and being supported by specialist officers.

Superintendent Richard Smith, from the South West Command Unit, said: “Despite the very best efforts of all involved, we must now sadly conclude that this young boy has died.

“His death is a tragedy and I cannot begin to imagine what his family will be going through. All our thoughts are with them.

“I know that on days like today when temperatures are at a record high, it might look appealing to jump in and cool off in rivers, reservoirs, lakes or other open water.

“Please don’t. The dangers are real and this evening in Richmond we have seen the terrible consequences of what happens when it goes wrong.”

All five of the remaining Conservative leadership contenders have committed to meeting net zero by 2050 (Christopher McKeon writes).

At a well-attended hustings organised by the Conservative Environment Network (CEN) and chaired by Cop26 President Alok Sharma, the candidates confirmed their commitment to the UK’s net zero target.

Prior to the hustings, all the candidates except Kemi Badenoch had signed the CEN’s pledge to maintain the 2050 target.

As recently as July 12, the former equalities minister had described net zero policies as “unilateral economic disarmament”, while she has previously called the 2050 target “arbitrary”.

But as Britain saw its hottest day of the year on Monday and temperatures approached 40C, Ms Badenoch joined her fellow candidates in committing to the 2050 target.

Ireland records hottest temperature in more than a century

Ireland has recorded its hottest temperature in more than a century as parts of Dublin reached 33C, according to Met Eireann.

A status yellow high temperature warning remains in place across the country as it faces another day of high heat.

Data from Met Eireann shows that temperatures soared to 33C at Phoenix Park in the capital on Monday, making it provisionally the hottest day ever recorded in July.

It also breaks the high temperature record for the 21st and 20th century.

It said: “Phoenix Park has broken the highest 21st temperature record with 33C which is Ireland’s highest of 2022 so far and 12.8C above normal.

“This is only 0.3C below the all-time 135-year-old record set at Kilkenny Castle in 1887. Temperatures may still rise further.”

Monday was exceptionally hot despite failing to live up to forecast that it would see the UK temperature record broken.

Wales recorded its hottest day ever at 37.1C in Hawarden, Flintshire, beating the previous record for the country which has been in place since 1990 by almost 2C.

Northern Ireland saw its hottest day of the year so far, with 3.1C at Derrylin. Scotland hit 31.3C at Aboyne in Aberdeenshire.

Tuesday is expected to be hotter still and all four UK nations are forecast to see temperature records shattered, with potential for 41C in Yorkshire and Lincolnshire and 40C in London.

Emergency services are experiencing a rise in 999 calls as a heatwave sweeps Britain, according to Steve Barclay, the health secretary.

Mr Barclay said: “We’re seeing an increase in calls and the extra resource we have put in place is to manage that. But there’s also a time lag in the data because the highest point of the expected heatwave is actually going to be tomorrow afternoon.

“So that’s the point of maximum concern, but we’re seeing an increase in calls.”

Brian Jordan, director of 999 operations at London Ambulance Service, urged people to only dial 999 in an emergency as he told the BBC a busy day would see 5,500 emergency calls to the service but he was anticipating up to 8,000 calls on Monday.

Yorkshire Ambulance Service said it was operating as usual with nothing out of the ordinary to report as yet.

A spokesman for North East Ambulance Service said the service remains busy “but so far today there has been no significant heat-related issues”.

The government has been ordered to redraw its net zero strategy after the High Court ruled it failed to effectively outline how it would limit carbon emissions, as the country swelters in record-breaking heat (Saphora Smith writes).

Climate campaigners won a legal challenge claiming the government’s plan was in breach of climate law as it omitted vital details to show how targets to bring down the level of harmful gases being pumped into the atmosphere would be met.

“Government’s strategy for getting to net zero is inadequate and unlawful, the High Court has found, following a successful legal challenge,” the Good Law Project said on Monday.

Cases brought by Friends of the Earth, environmental law charity ClientEarth and legal campaign group the Good Law Project were heard together at the High Court of Justice in London last month.

Lawyers for the claimants argued that the policies for emissions reduction targets only added up to around 95 per cent of the carbon reductions needed to be achieved.