A transgender NHS A worker has won a healthcare discrimination case after she was left “embarrassed” when her boss confronted her with concerns that she was “naked from the waist down” in shared changing rooms.

That transgender Woman was asked by her manager at Northern General Hospital in Sheffield if she wears underwear to work or “if she wears them in general”.

The questioning came after there had been “concern” among staff that the transgender woman was “naked from the waist down” in the communal dressing room, and she had made a “lighthearted” comment about being so hot at work was that she took off her pants.

The transgender woman was also left at work “crying and shaking” after a note in her locker told her to “get out you tranny freak”.

The abuse happened after a memo informed hospital staff that the transgender woman would be entering and using the women’s changing rooms.

The male-born employee-turned-female at the time also overheard female colleagues saying, “I’m fed up with this assed guy pretending to be a woman.”

Colleagues even said, “that thing can rape me,” heard a labor court.

Now the staffer, whose identity cannot be disclosed for legal reasons, has successfully sued Sheffield Teaching Hospitals NHS Foundation Trust, Yorkshire, for discrimination based on a gender reassignment. 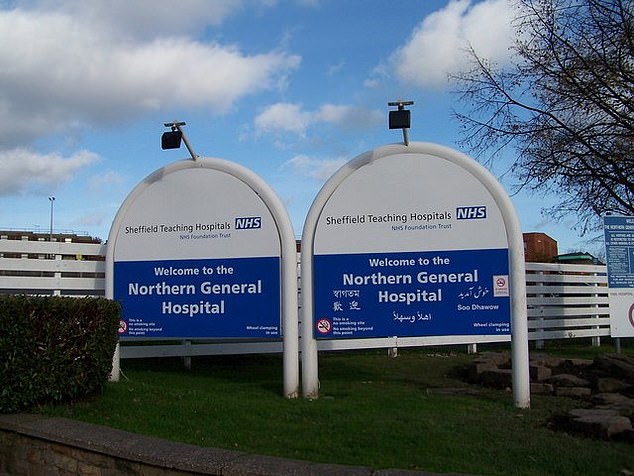 A transgender NHS worker has won a gender reassignment discrimination case against the health service after colleagues told her: ‘Get out, you tranny freak’. The transgender woman was left “crying and shaking” at work at a Northern General Hospital in Sheffield after discovering the offending note in her locker

The Labor Court in Leeds, Yorkshire, heard she took up a non-medical post in a ward at Northern General Hospital, which is part of the Trust, in the summer of 2020.

Being in a transition, unemployed and suffering from emotional issues, the staffer was afraid to join.

What do the terms “cisgender” and “gender critical” mean?

Cis – or cisgender – is a term used primarily by the LGBT community to describe a person whose gender identity matches their biological sex.

It was coined in 1994 and started appearing in dictionaries in 2015 as the term became more widely used.

Although still unfamiliar to many people, the term is now commonly used in connection with news and debates about transgender issues.

This means that those who hold gender-sensitive views see transgender women as men and transgender men as women.

Last year, the Equality and Human Rights Commission (EHRC) ruled that anti-gender views count as a philosophical belief and are therefore protected by the Equality Act.

The ruling came after an employment tribunal appealed to Maya Forstater, who was fired from her job after claiming people cannot change their biological sex.

The Trust, which provides equality and diversity training to employees, encouraged workers to be respectful of her, but soon after she joined, she was mistreated.

A court report said: “It is undisputed that around 7 a.m. she found a note pinned in her locker in the ladies’ locker room that read: ‘Get out, you tranny freak’.”

At lunchtime that same day, she was again subjected to “deeply abusive and unacceptable” abuse when she was in a stall in the dressing room and overheard two female colleagues talking outside the stall.

One said: “I’m fed up with this guy with a dick pretending to be a woman who doesn’t even dress like a girl and has facial hair, this thing could rape me and we can evict him from the department maybe.” find a suitable leper colony for it.”

The other said, “I agree, but we must do something, but what can we do if management is guided by this matter”, and the other replied, “We will find a way”.

In August 2020, the trans woman again found a note in her locker that said “Tranny out”.

The authors of the notes and the women who made the offensive comments have never been identified despite an investigation, but the Trust admitted all three incidents happened.

In June 2021, the transgender woman was “embarrassed” when asked by her manager if she was wearing underwear.

Finally, labor judge Sarah-Jane Davies ruled that a manager was interviewing her because she is transgender.

Judge Davies said: “One concern about the woman’s bareness in the dressing room was likely related to the fact that she is a transgender woman.

“It was a shared changing room with a shower stall. It did not seem likely to the court that there would have been a concern about a cisgender woman who undressed while changing in such a changing room.

“The court therefore came to the conclusion [the manager] asked the questions due to concerns that the woman might undress in the women’s locker room as a transgender woman.

“It was because of the sex change. Ms. Hawkshaw would not have asked the questions of a cis woman.”

The employee won a gender reassignment discrimination lawsuit related to the underwear issues.

She also made a number of other complaints alleging discrimination over how her supervisors and the Trust had dealt with her grievances and absentee files, and also alleging that they were unsupportive of her.

However, all of these claims failed because the court ruled that the Trust supported them and dealt with their grievances appropriately.

The employee, who has a university degree, left the trust last year.