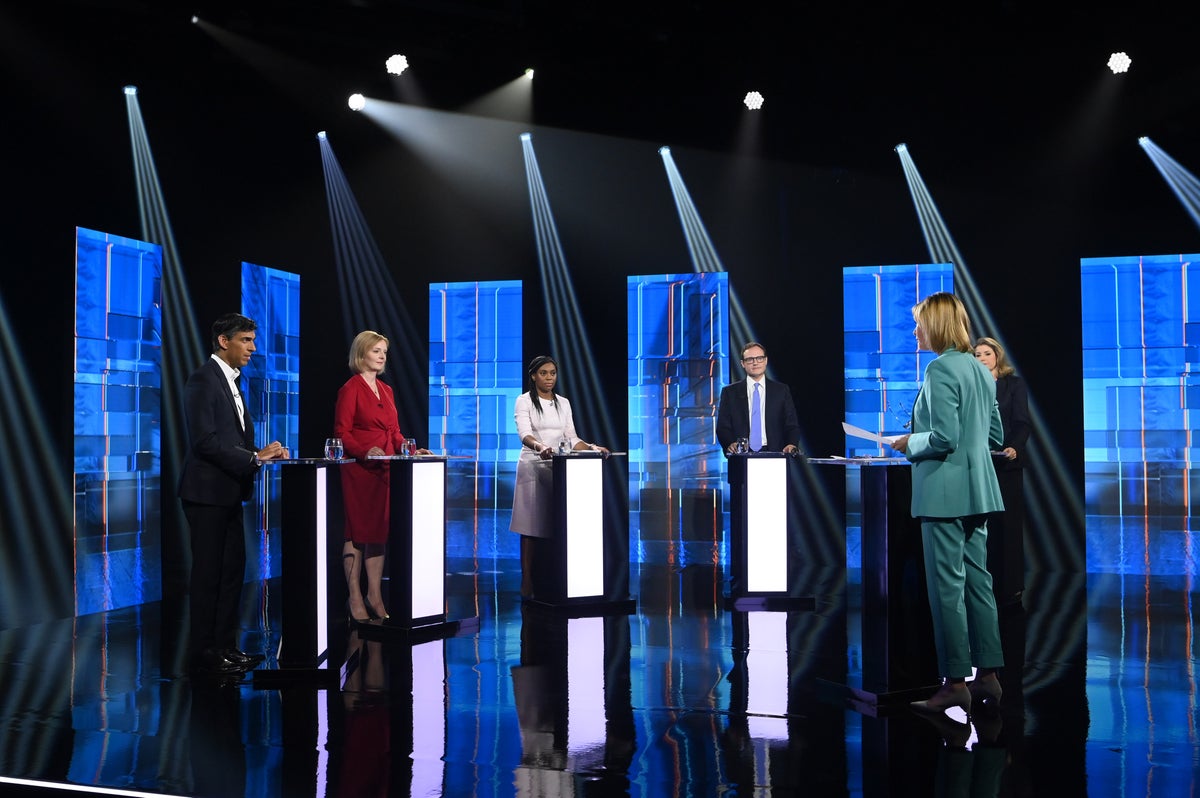 The former chancellor accused Ms Truss of peddling “something for nothing” economy after she said he was stalling growth by raising taxes to the highest level in 70 years.

And after Ms Mordaunt said she would not be sticking to his rule of only borrowing to invest, he said even former Labor leader Jeremy Corbyn did not advocate such fiscal easing.

After being criticized for a poor performance in the first debate, Ms Truss immediately went on the offensive in the second encounter, staged by ITV, by attacking Mr Sunak’s file at the Treasury.

“Rishi, you have raised taxes to the highest level in 70 years. That will not boost economic growth,” she said.

“They raised Social Security, although people like me at the time in Cabinet were against it because we could have afforded to fund the NHS through general taxes.

“The fact is that raising taxes now will stifle economic growth; it will prevent us from generating the income we need to pay off the debt.”

Mr Sunak said the pandemic had damaged the economy and public finances needed to be rebuilt.

“I’d love to stand here and say, ‘Listen, I’ll lower this tax, that tax and one more tax, and everything will be fine.’ But, you know what? It won’t,” he said.

“These things come at a price and the cost of higher inflation, higher mortgage rates and eroded savings. And you know what? This good-for-nothing economy is not conservative. It’s socialism.”

Ms Mordaunt said the limited tax cuts she advocates are not inflationary and people now need help with the cost of living.

Mr Sunak said: “It is one thing to borrow for long-term investment. Putting the day-to-day bills on the country’s credit card is a whole other matter. It’s not only wrong, it’s dangerous.

Mr Sunak added: “If we’re not for solid money, what’s the point of the Conservative Party?”

There were more ill-tempered exchanges between Ms Mordaunt and Kemi Badenoch – whom Ms Mordaunt had accused in the first debate of pushing a policy of gender self-identification for people who wanted to legally change their gender when she had government responsibility for the issue.

Following further press reports casting doubt on her denials, Ms Mordaunt said: “I know why this is being done, but I would say that any attempts to portray me as an out-of-contact person will fail.”

Ms Truss also denied she had campaigned negatively following attacks on Mr Sunak by some of her supporters, who accused him of ousting Boris Johnson.

The debate took place ahead of Monday’s third ballot of MPs, which was set to eliminate another candidate, leaving just four.

Tom Tugendhat, who finished fifth in the second round, tried to make a virtue of being the only one of the remaining candidates not to have served in government.

He said those who had been ministers under Boris Johnson had “added credibility to the chaos”, making it harder for the Conservatives to win the next general election.

“We need to make sure we win Conservative seats across the country, and even give really good people credibility to the chaos.”

Ms Badenoch said she was “ashamed of nothing we have done” while in government and they have “much to be proud of”.

“Serving in government is not easy. It requires making difficult decisions. Tom has never done this before. It’s very easy for him to criticize what we did, but we were out there on the front lines and made the case,” she said.

Mr. Tugendhat replied that as a former army officer he had been on the front lines in Afghanistan and Iraq, leading “in the struggle against Putin and China”.

She replied, “You haven’t made any decisions, talking is easy.”

But asked by the moderator Julie Etchingham raise your hand if they would give Mr Johnson a job in their government if he was willing to serve, none of them did.