A lovestruck pensioner faces six months behind bars after admitting today he stalked an elderly widow with gifts and proposals after they met on a saga-style cruise vacation.

Welshman Douglas Dabb made 330-mile round-trip trips to harass Wendy Winstanley, also 77, in her hometown and turned up unannounced at local church events when she volunteered.

Ms Winstanley rebuffed his eager advances, but retired Hitachi worker Dabb, from the former coal mining village of Cwmaman near Aberdare, South Wales, sent her offensive messages, including a card wishing her a “horrible birthday”.

Dabb also sent a letter wishing her health and saying he hoped she would be seriously injured in a car accident.

During her ordeal, Mrs Winstanley, of Sandbach, Cheshire, had to ask other parishioners to act as lookouts for her should he show up for services or mass.

She was so scared of her unwanted suitor that she was reportedly “white as a sheet” and sobbing when Dabb managed to sneak into the building while standing in the pew area.

At Crewe Magistrates’ Court, Dabb was warned he could face up to six months in prison after admitting to stalking Ms Winstanley, who is believed to be working in a supermarket.

Dobbs met Mrs. Winstanley on vacation five years ago and they dated for a number of years. They were never in a relationship and just friends, with Ms Winstanley “making it clear she was no longer interested in anything,” the court heard.

Miss Yvonne Dobson, prosecutor, told the hearing that Dobbs would try to hug and kiss her when each holiday ended, forcing her to “turn her head not to kiss him”. 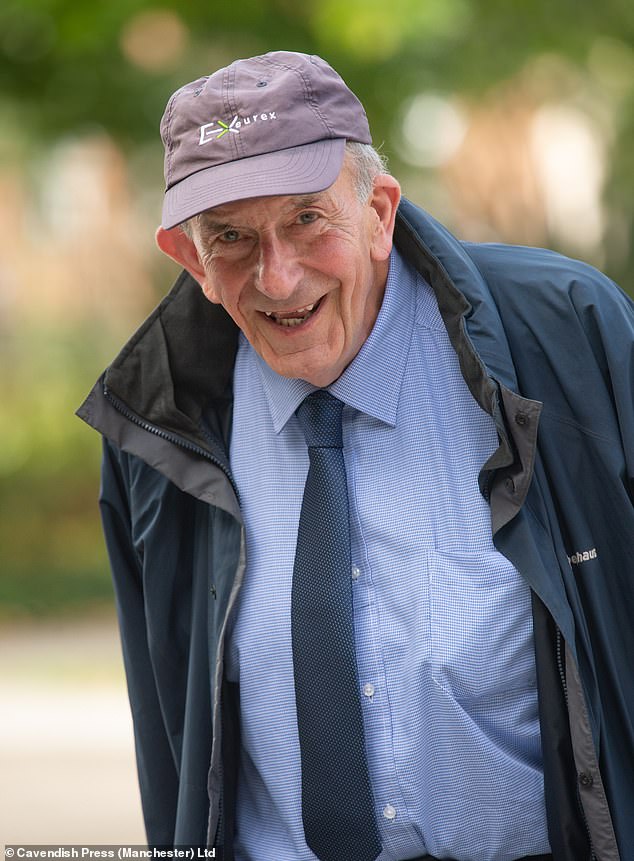 Welshman Douglas Dabb (pictured), 77, is behind bars six months ago after admitting today he stalked an elderly widow with gifts and marriage proposals after they met on a saga-style cruise holiday 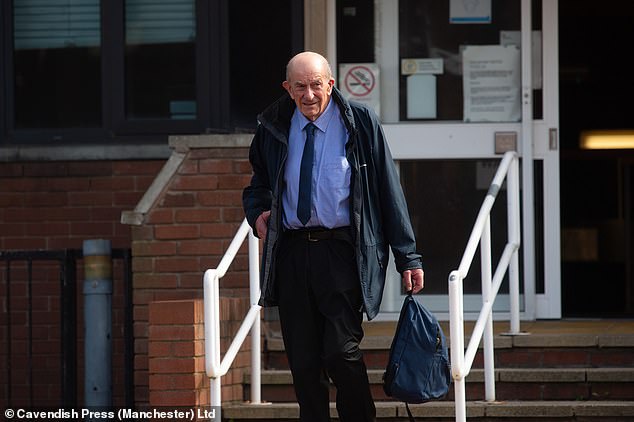 “I hope you have a terrible birthday!” Retired Hitachi worker Dabb (pictured outside Crewe Magistrates’ Court), from the former coal mining village of Cwmaman near Aberdare, South Wales, sent offensive messages to Mrs Winstanley after she turned down his proposal of marriage, including a card telling her wished you a “terrible birthday”. Dabb also sent a letter wishing her health and saying he hoped she would be seriously injured in a car accident 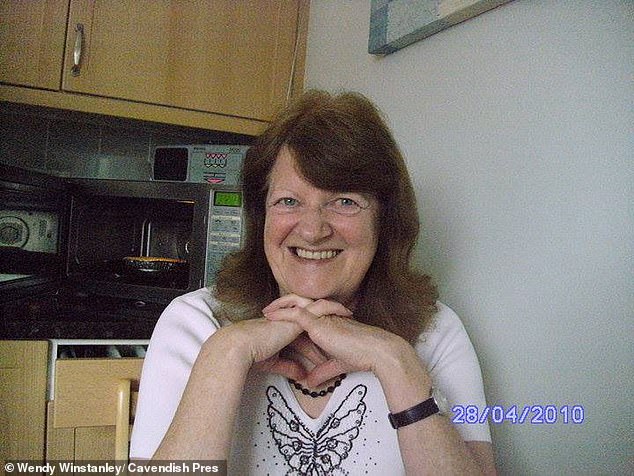 Dobbs met Wendy Winstanley (pictured), 77, on vacation five years ago and they dated for a number of years. They were never in a relationship and just friends, with Ms Winstanley “making it clear she was no longer interested in anything,” the court heard

On a cruise, Mrs. Winstanley told Dobbs that she lived in Sandbach and they arranged to visit. After picking him up from the train station, she took him on a city tour.

In June 2021, she began a relationship with another man, Ms Dobson told the court. “But in July 2021, the defendant contacted her by phone and said he wanted to come back to the area and asked to stay at her home overnight.”

“She said ‘no’ and said her partner would not agree, but in August 2021 he contacted her again and asked if she would say ‘yes’ if he asked her to marry him. She was taken aback by this as she had never been in a relationship with him or been romantically involved. Around this time his demeanor changed.”

In September, she received a birthday card that was “a little early” in the mail, and the same day she answered a call asking if she’d got it.

The card included a handwritten message wishing bad things would happen to her and hoping she had a “horrible birthday”.

A neighbor saw Dobbs go to her home as she was out and clip flowers and a map to her goalpost, prosecutors said.

The court heard that because Ms Winstanley had told Dabb about her church, in October she called other parishioners about him “if he showed up”. In November, she then received a five-page letter from the accused.

‘He said he thought Mrs Winstanley would make a good one-night stand,’ said Miss Dobson, ‘he told her how much he loved her. He wished that she would get sick and be seriously injured in a traffic accident.’

The court heard Dabb showed up at the church in early December when they were holding a Christmas market. He bought her a jewelry wheel, she said, an item Mrs. Winstanley saw on one of her cruises. She believed he handed over the bike along with another letter. 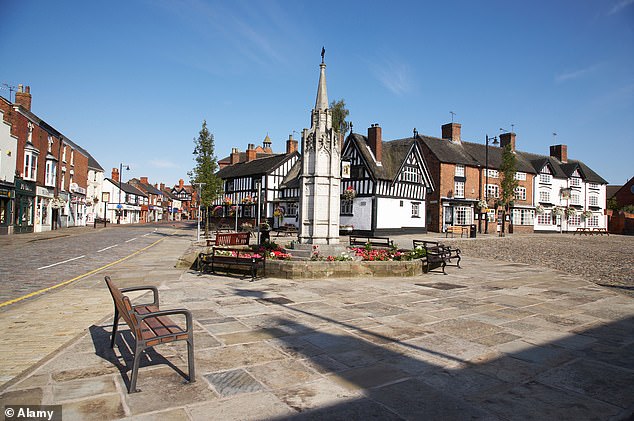 During her ordeal, Mrs Winstanley, of Sandbach (Sandbach High Street pictured), Cheshire, had to ask other parishioners to act as lookouts for her should he show up for services or mass

The prosecutor said: “After the defendant left the church building, she collapsed in the kitchen and explained to other people that the defendant had been following her and that she was afraid of him.

“On December 8, 2021, she received a Christmas card with a normal message, which she found strange given the amount of hurtful things he had already said.

“Then on February 15, 2022, she received another envelope containing a second-class stamp, although she believed it had been delivered personally. It contained a letter and two bags of green tea. She had given him these tea bags on a previous cruise. She said she doesn’t like green tea bags. She found this strange and worrying.

“Then, on March 21 of this year, she was in church, and while sitting downstairs by the pews, she saw the accused enter. One person managed to get him to walk. The individual spoke to the accused and then to Ms Winstanley. The person noticed that they were pale and started to cry. The complainant also received a number of telephone calls but cannot recall the exact dates or times.’

Miss Dobson told the court that the victim never wrote to Dabb or replied to any of the letters or cards he sent and said Ms Winstanley eventually went to the police who answered him on April 2.

“He knew he was overdoing it. He said he just wanted to get rid of it. He could understand why Mrs. Winstanley felt this way.

“The harassment took place over a long period of time and in relation to the distress caused, Ms Winstanley had to inform her church and broke down when she found out the accused had been there.”

In softening Dabb, defense attorney Taryn Reay said: “He was a man of good character in the past and unfortunately he is losing that in court today. He is 77 years old and has never had any trouble with the court. He has lived a carefree life and I am as sure as I can be that he will not bother the courts again.’

Miss Reay added: “He met the complainant on a group holiday and they were friends. They went on at least 12 vacations, some alone, some as a group. The friendship was very good. Not particularly good, they were just good friends.

“But it just explains why a 77-year-old man who had never been in trouble before acted the way he did. What he wanted was for her to say “I’m in a relationship” and whether or not he should be in touch. He understands there can be no more contact and to his credit there has been no contact since March 20th. This was a good friendship that went incredibly wrong on Mr Dabb’s behalf.’ 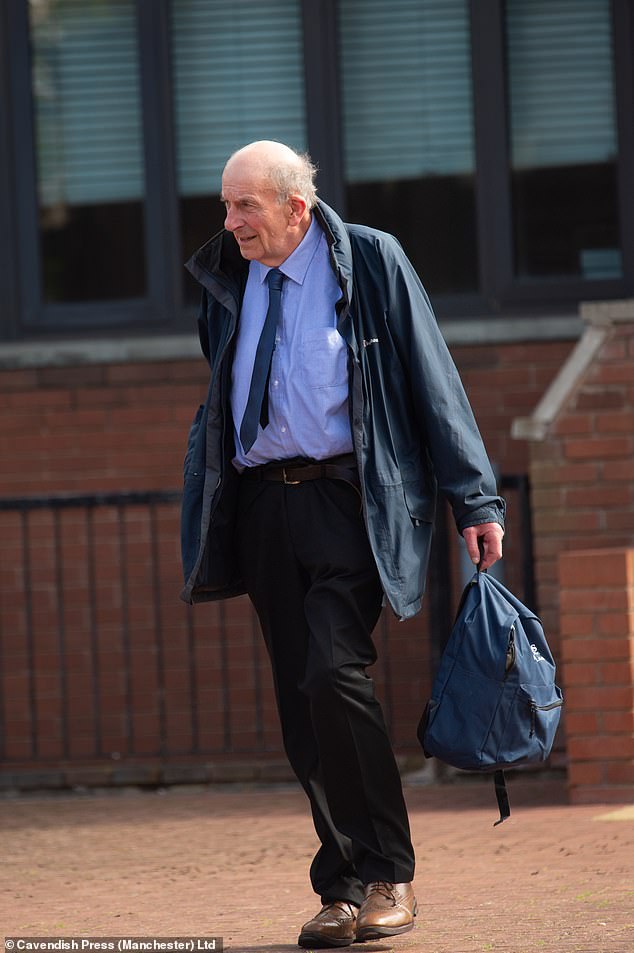 At Crewe Magistrates’ Court, Dabb was warned he could face up to six months in prison after admitting to stalking Mrs Winstanley

Dabb worked for Hitachi between 1964 and 2000 and took care of his mother for seven years after his retirement.

“After her death he began to travel as he was retired and this is where the holidays started,” said Miss Reay, “he likes to travel to different parts of the country on sleeper trains.”

JPs ordered parole reviews and Dabb will be sentenced later this month. His bail conditions prohibit him from contacting Mrs. Winstanley in any way or from visiting her street.