The United States is bracing for another heatwave, due to begin today, with more than 100 million Americans under severe weather warnings and temperatures expected to rise to 113 Fahrenheit in parts Texas and Oklahoma.

Nearly 20 percent of the US population, some 60 million people, are expected to see temperatures rise above 100 degrees in the coming week, while the National Weather Service has also warned of thunderstorms and large hail.

In a statement Monday, the Weather Prediction Center said, “Dangerous heat today will continue to affect much of the central and parts of the southwestern United States.”

The warnings come a day after torrential thunderstorms hit New York on Monday, with heavy rain flooding streets and subways.

Manhattan, the Bronx and the surrounding region were placed under a flash flood warning until 6 p.m. local time, the National Weather Service said.

Residents were warned to stay away from their basements as torrential rain hit amid fears the storms could cause a repeat of last year’s Hurricane Ida, which killed dozens of people

As the rain eased, there were strong wind warnings from forecasters who said gusts could reach 55mph across the city’s south, including Brooklyn, Staten Island and lower Manhattan.

Today, as the storms subsided, attention turned to the temperature. Another heat wave is expected to begin and will affect large parts of the country. 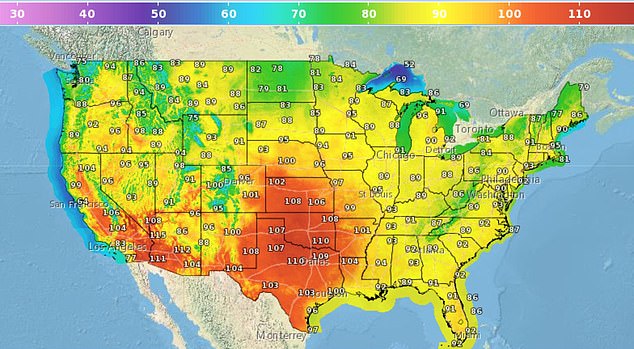 The United States is bracing for another heatwave, due to begin today, with more than 100 million Americans under severe weather warnings and temperatures expected to rise to 113 Fahrenheit in parts of Texas and Oklahoma. Pictured: A National Weather Service map showing daily highs across America for Wednesday, July 20 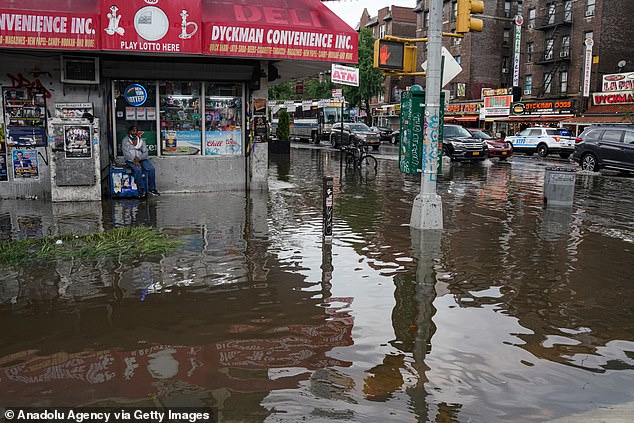 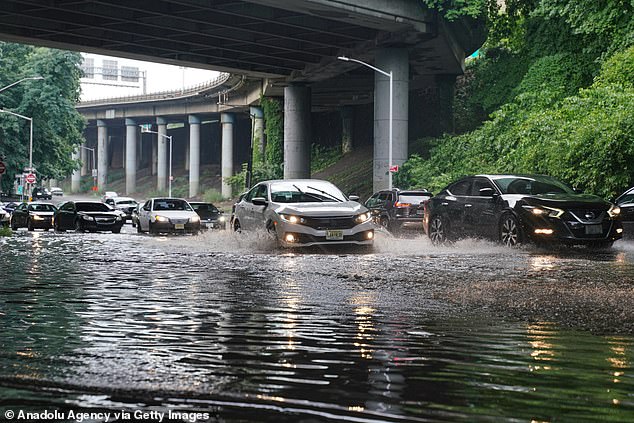 Manhattan, the Bronx and the surrounding region were placed under a flash flood warning until 6 p.m. local time, the National Weather Service said. Pictured: Cars are driven through flooded streets in New York on Monday 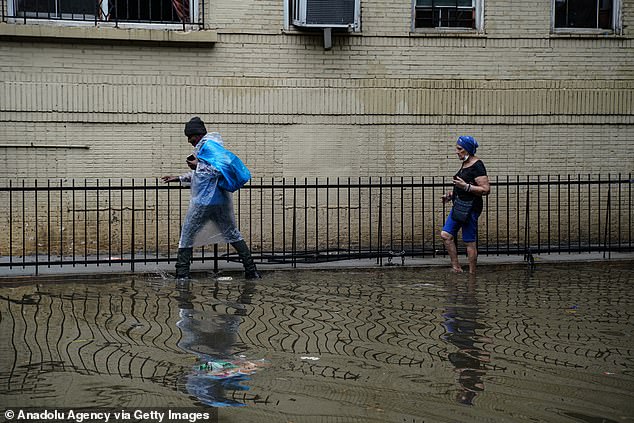 Pictured: People wade through floodwaters in New York on Monday 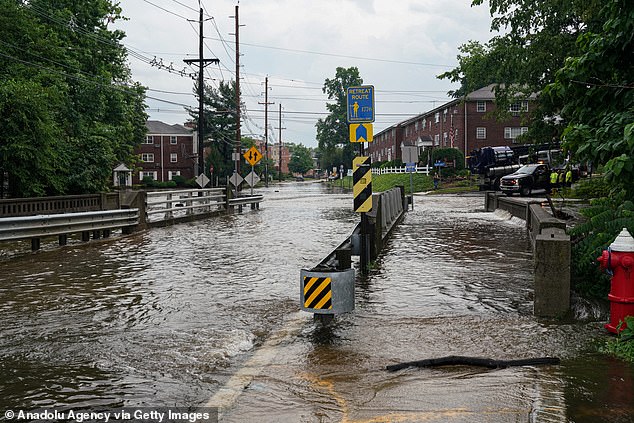 More than 40 million people in the Plains and central California are on heat alert as temperatures soar 10 to 15 degrees above normal.

Daytime temperatures of 100 degrees are expected in the lower Mississippi Valley and parts of the Central Plains and lower Missouri Valley, and up to 110 degrees in some parts of the region.

Extreme heat with highs of 113 degrees is forecast for Texas and Oklahoma. Highs of 100-110F or higher will be concentrated in the south-central states and parts of the deserts, forecasts showed.

In Texas, Oklahoma and South Dakota, residents have been warned that heat indexes — a number that indicates what it feels like for the human body after accounting for heat and humidity — could reach 111 degrees.

Almost 20 percent of the US population, roughly 60 million people, are expected to see the dials rise above 100 degrees in the coming week.

The national weather service sent a heatwave warning on its Twitter account on Monday, along with maps showing the hard-hit areas.

“Heat is typically the leading cause of weather-related deaths each year. Heat waves can cover a large area, exposing many people to a dangerous combination of heat and humidity,” the alert said.

Pictured: A map released by the National Weather Service showing areas of the United States that are on an excessive heat warning 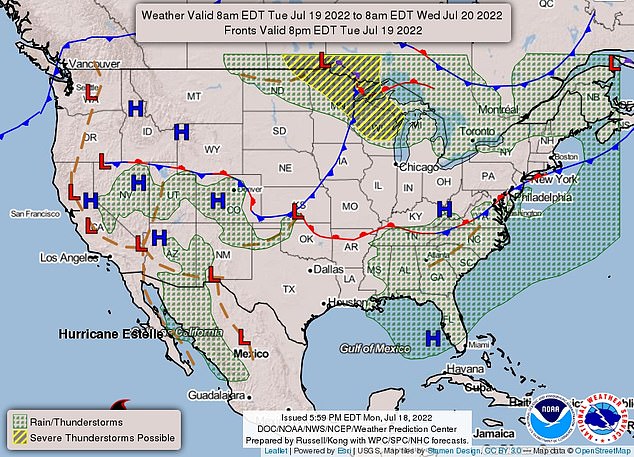 Pictured: A separate map from the National Weather Service showing areas likely to be hit by thunderstorms on Tuesday and Wednesday

On Tuesday, the Washington Post was able to see a reading of 112 degrees in Wichita Falls, Texas reported today.

Dallas, Texas is expected to hit 110 degrees Tuesday afternoon, which would break the previous daily record set in 1980.

Temperatures could stay in the 80s overnight in the Texas city, meaning residents are at increased risk of heat-related illnesses due to their inability to cool.

As far as South Dakota in the north, temperatures should be in the triple digits. Rapid City is expected to break the 1934 high of 104 degrees today. Some parts of the Dakotas are expected to reach 109 degrees.

Meanwhile, temperatures in the tri-state area are expected to soar into the 90s — just a day after the heavy rains.

Today will be hot but probably the most comfortable day for some time. Forecasters say it will feel closer to 100 degrees in the second half of the week.

Days in New York averaging over 90 degrees in July are expected to be 11 – five days more than the total so far this year.

High temperatures were observed as early as Sunday, with Salt Lake City posting a record high of 104 degrees for July 17.

As temperatures soar, weather agencies Tuesday warned of the risk of severe thunderstorms, particularly in the upper Midwest and Great Lakes.

The warnings came as a severe heatwave swept across western Europe on Tuesday break the all-time British temperature record.

Parts of the continent withered under a scorching sun that had raged wildfires and overwhelmed emergency services.

Meteorologists in the UK have been predicting for days that the current national record of 102 degrees Fahrenheit, registered in 2019, would be broken on Tuesday and 40C would be surpassed for the first time.

The weather agency, the Met Office, said it had provisionally been the warmest night on record, after temperatures stayed above 77F in most places.

Experts blame climate change for the recent unprecedented heat wave, noting that more frequent extreme weather will only get worse in the coming years.

Across the Channel in France, a host of cities and towns recorded their highest-ever temperatures on Monday, the national weather bureau said. Saint-Brieuc on the Channel coast hit 39.5°C, beating a previous record of 38.1°C, and the western city of Nantes recorded 42°C, beating a decades-old high of 40.3°C set in 1949 .

Firefighters in south-west France were still struggling in the sweltering heat to contain two massive blazes that have wreaked widespread destruction.

For nearly a week, armies of firefighters and depth-bomb planes have been battling fires that have mobilized much of France’s extinguishing capacity.

Two people have been killed in the blaze in Spain, which the Spanish Prime Minister linked to global warming, saying “climate change kills”.

This figure comes on top of the hundreds of heat-related deaths reported in the Iberian Peninsula as high temperatures have gripped the continent in recent days and sparked wildfires from Portugal to the Balkans.

Some areas, including northern Italy, are also experiencing extended droughts.