A computer science teacher touched a 14-year-old student’s chest in the middle of class for a “sexual thrill,” a court heard today.

Stephen Kenyon allegedly sexually assaulted the girl by placing his fingertips on her chest in a “willful transgression” which made the girl “nervous and uncomfortable”.

The court heard she broke down in tears as she met friends after class and told them what happened to the “over-friendly” teacher.

The jury at Southampton Crown Court was told that Kenyon taught at a secondary school in Hampshire’s New Forest. 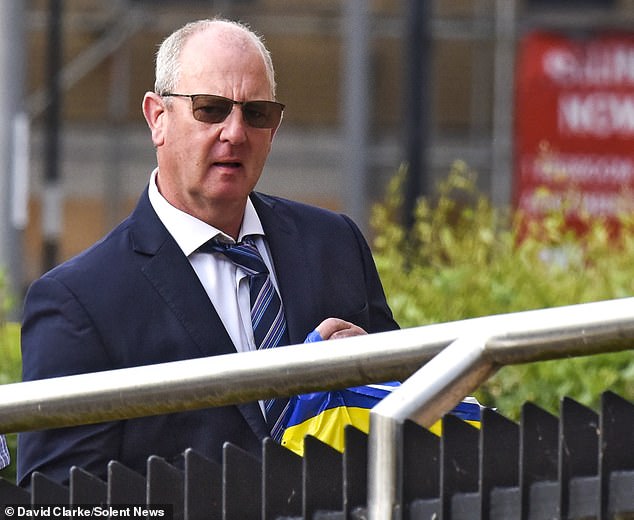 Stephen Kenyon, a computer science teacher, is said to have sexually assaulted the girl by placing his fingertips on her chest in a “willful transgression” which made the girl “nervous and uncomfortable”. Pictured: Stephen Kenyon at Southampton Crown Court

‘[The alleged victim] was 14 years old and a student at this school.

“She was in Mr. Kenyon’s class working on a computer. Just before lunchtime, Mr. Kenyon stopped by, ostensibly to check on their work.

“He stood behind her and put his left hand under her left arm and around her side so his fingertips touched the side of her breast.

“His hand stayed there for several seconds. He asked her if she was okay and then walked away.

“She was shocked and upset. The incident was observed by her friend.

“When they met up with friends at lunchtime, she burst into tears.”

The court heard that the student told her mother what had happened when she got home, who then reported it to the school and called the police.

The jury was told Kenyon had been questioned by police and she denied the incident took place and gave an interview that mostly contained “no comment”. 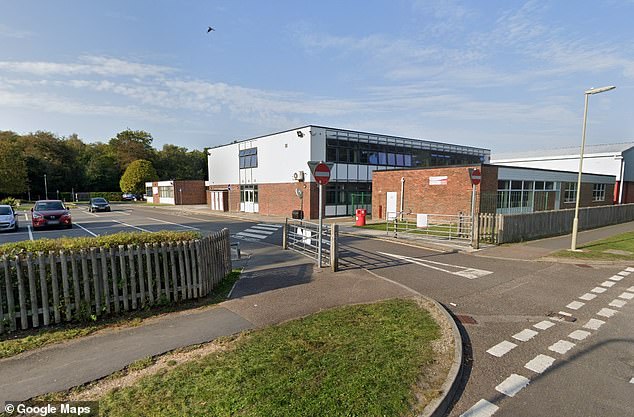 The jury at Southampton Crown Court, Hants, was told that Kenyon taught at Noadswood School in Dibden Purlieu

Mr Tucker added: “He said he couldn’t think of any reason why she would make the claim she had.

“He said it was a complete fabrication, he said he hadn’t touched her point, he said he wasn’t attracted to 14-year-old girls and would never touch a child.

‘[Mr Kenyon] had nothing at all to do with touching her, let alone the way she described it, in this day and age when protection and personal boundaries are such a hot topic.

“No teacher would touch a student in the way she says unless it was a deliberate transgression designed to induce a sexual thrill.”

The jury was played a video interview with the alleged victim, in which she said: “I was sitting at my desk and working on the computer.

“He stopped by to check on my work and when he got to me he stopped and wrapped his hand around my side, under my arm and forward so his fingertips were on my bra and on my chest.

‘He said ‘Are you alright?’ then went away.

“He came across the room again afterwards and put his hands on my shoulders and said, ‘Are you alright?’

“At lunch I saw my boyfriend and started crying. I cried and shook for the rest of lunch.

“I cried for a long time, which I really don’t do in front of anyone.

“I went to my last class…I couldn’t really concentrate, I didn’t eat my lunch because I was too excited.” 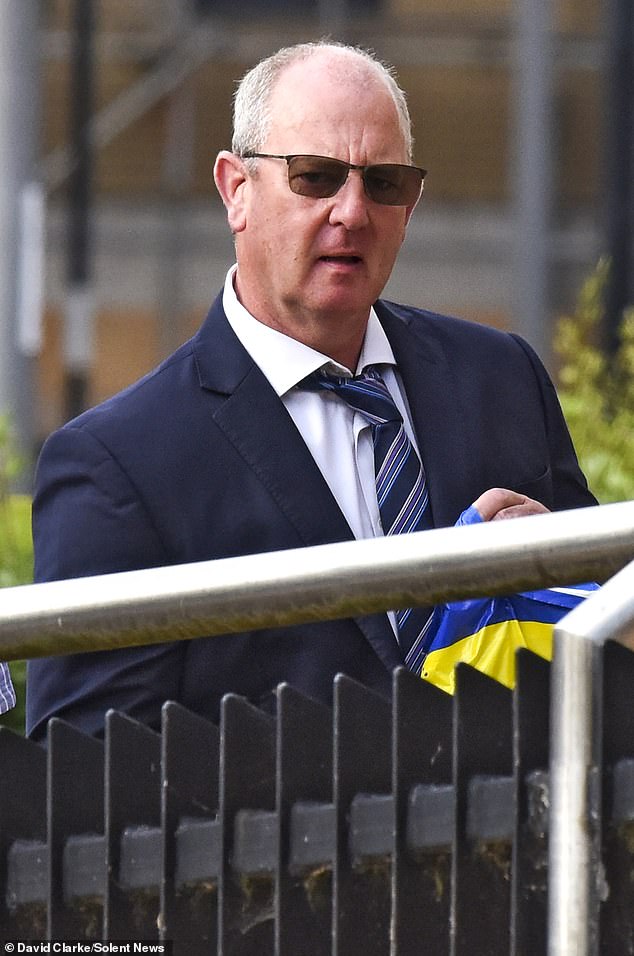 The jury was told that Kenyon (pictured at Southampton Crown Court) was questioned by police and denied the incident had taken place, giving an interview that largely read “without comment”.

She said she has classes with Kenyon several times a week in a group of about 30 students.

The court heard she was “kind of uncomfortable around him because he was being too friendly.”

She added: “He was always in your personal space and wasn’t wearing a mask.”

Kenyon, who lives in a £750,000 house in the leafy village of Dibden Purlieu, denies a charge of touching sexual assault.

The schoolgirl told jurors today she didn’t want to tell any other teacher what happened until she spoke to her mother after school.

When asked why she didn’t report it to a staff member over lunch, she added, “I wanted to speak to my mum first. It’s not something I’d like to say about text. We weren’t allowed to have our phones at lunch.’

Jennifer Dempster QC, defending Kenyon, said: “Computer science is one of those lessons where the teacher has to get close to you because each student has their own computer screen.

‘I suggest he squat next to you. He didn’t bend over you in the sense that he bent over your whole body, he actually crouched down next to you.’

The teenager replied, “No, he wasn’t crouching.”

A friend of the girl, who sat next to her in class that day, told the court she also saw Kenyon touch the girl’s breast.

The teenager said: “Her hands were on the desk next to the keyboard and [his hand] was kind of off her chest. I think his fingertips touched. I was about a foot away.

“She got very tense and very calm and she was shaking quite a bit.

‘[After class] She became very quiet and when she met her friends she just burst into tears.

“About ten minutes later…she came to find me. She asked me for a hug.’

Ms Dempster told her: “From your seat you could not have seen what you saw and somewhere along the line you are mistaken.” 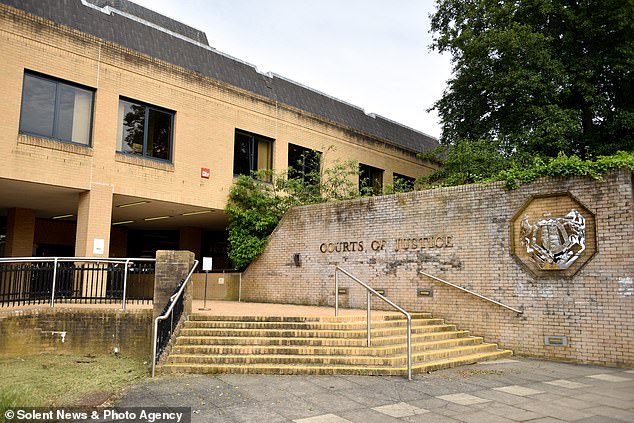 The schoolgirl today told jurors at Southampton Crown Court (pictured) she didn’t want to tell any other teacher what happened until she spoke to her mum after school.

Kenyon today vehemently denied touching the schoolgirl and told the court he would never have a reason to touch a student in his class.

The jury heard he qualified as a teacher at Southampton University in 2012 and has been teaching at Noadswood, the only school he has ever worked at, for around ten years.

The married man, who has a nine-year-old son and stepchildren aged 17 and 22, told the court: “When I did my control circle, I went into the girls’ row first and that was all right.

“I certainly don’t bend over a student. I’ve been pulling up a chair my entire professional life, and when I can’t do that, I crouch next to her.

‘I noticed that [the alleged victim] seemed to be struggling with her work, so I said, ‘Do you need help?’ and she said yes.’

He said he asked the girl and the girl sitting on her left to “sit up” so he could crouch between them and hold on to the girl’s chair leg on the left for support while he did the His right hand operated the alleged victim’s keyboard and mouse.

Kenyon told the court he helped her, then got back up and walked on without touching the alleged victim or any other student in any way.

When asked if he would describe himself as over-friendly, he said: “I wouldn’t say over-friendly, I’m just a friendly person. I love my job. I might talk a little too much.’

He added that touching a student would be “completely inappropriate” and that “as far as I know, I haven’t had physical contact with her or any other student…I can’t rule out the possibility that I accidentally touched them, but I believe.” not that that is the case and certainly not like that”.

Nicholas Tucker, Prosecutor, said: “I have given you the report that was given by [the students] It is true that you intentionally wrapped your hand around her left side so that your hand touched her breast.’

Kenyon replied, “No. I find [she] I have a feeling that something happened, but I also have a strong feeling that I didn’t do anything.

“I would never, under any circumstances, harm a woman and I certainly would not harm a young girl in any way, shape or form.”

The process goes on.