Video footage has surfaced of the moment a serial sex predator lunged at an unsuspecting woman in Manhattan, just an hour after he allegedly carried out a similar attack near Central Park.

Surveillance footage released by the New York City Police Department showed the perpetrator following his prey on an electric bike as she walked down a street around 5 a.m. ET on July 6.

Moments later, the man was seen running after the woman under a series of scaffolding on Avenue A and East Fourth Street before grabbing her from behind and dragging her to the ground.

Police say the man then forced his victim to perform oral sex on him and threatened to stab her if she didn’t comply before he set off on his electric bike.

The 28-year-old victim was taken to hospital after the incident for medical evaluation after suffering both the sexual assault and abrasions in the fight.

The same predator is believed to have carried out a similar attack on Central Park West and West 82nd Street at 4 a.m. ET, grabbing a 23-year-old woman from behind and pinning him in a shockingly similar manner.

Police say the woman was also sexually assaulted and was subsequently taken to hospital to undergo the same medical evaluation and treatment for abrasions, but did not provide details of the attack. 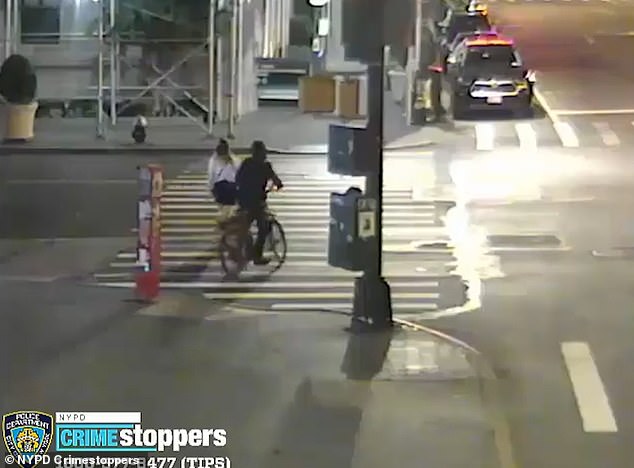 Surveillance footage released by the New York City Police Department showed the perpetrator following his prey on an electric bike as she walked down a street around 5 a.m. ET on July 6 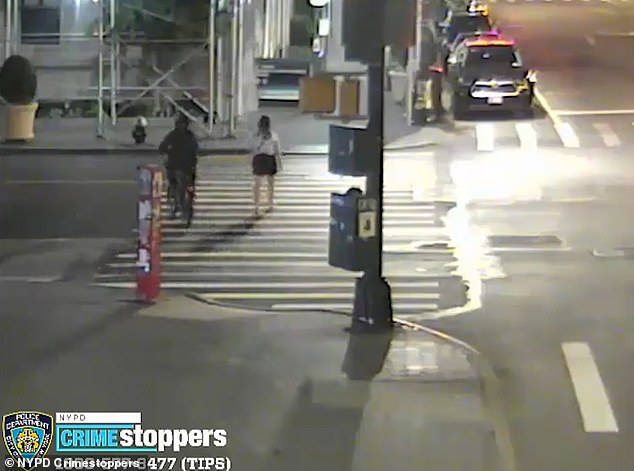 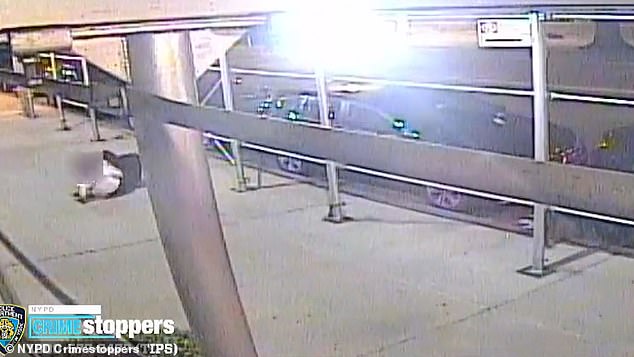 Moments later, the man was seen running after the woman under a series of scaffolding on Avenue A and East Fourth Street before grabbing her from behind and dragging her to the ground 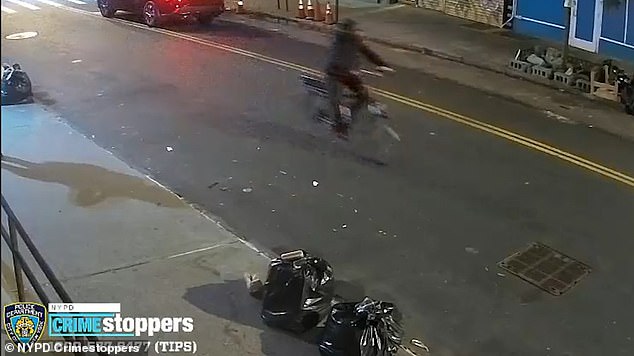 After committing the attack, the predator jumped back onto his e-bike and sped away

Disturbing footage of the July 6 attack was released by the NYPD to social media over the weekend — just as the Big Apple witnessed a night of bloodshed on Sunday night, with 11 separate shootings and stabbings in just six hours.

It came shortly after the city’s mayor, Eric Adams, vowed to NYC citizens that he would change that crime thing around’.

The night of bloodshed broke out at a time when many NYC residents are increasingly concerned about rising crime statistics.

While the number of homicides and shootings in 2022 to date is down from this time last year, NYPD statistics show that overall crime has increased more than 30 percent from 2021.

Just hours before the weekend’s crime spree began, NYC Mayor Adams, who was campaigning on promises to clamp down on violent crime in the city, said a criminal justice system rampage is to blame for the violence in New York City.

“The climate in which we operate is deplorable … in which the entire criminal justice apparatus has turned its back on the public and the public’s right to live safely in their city,” he said.

“We took almost 3,800 guns off the streets and many of the people who had carried those guns have been able to return to the streets.”

He continued: “We’re seeing a decrease in shootings, a decrease in homicides, but it’s more than that, it’s the robberies, the burglaries.

“We’re going to flip this crime thing, and when we do that, people are really going to see the progress that we’ve made in other parts of the city,” he added. 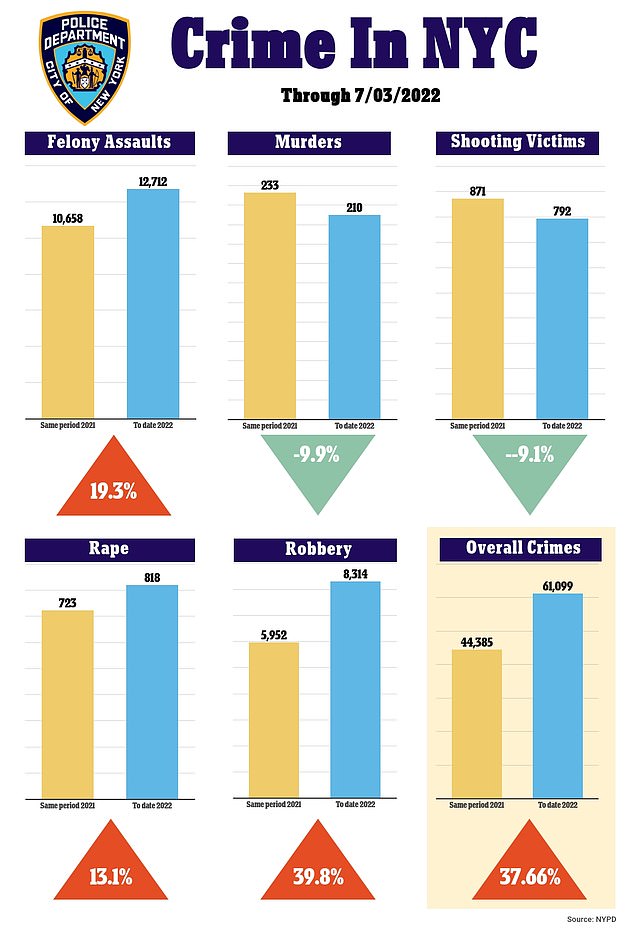 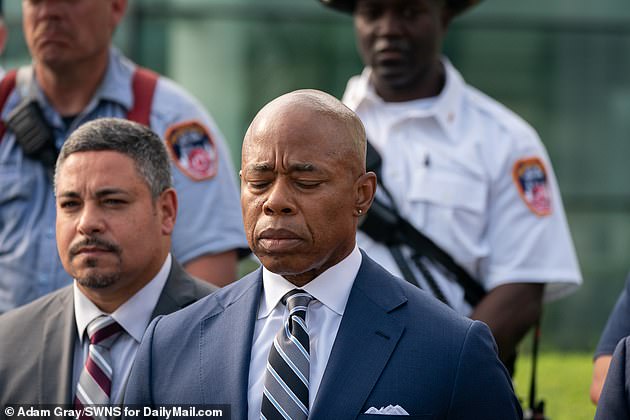 The incidents happened within just six hours, shortly after the city’s Mayor Eric Adams (pictured July 12) vowed to citizens of the Big Apple to “reverse this crime cause.”

However, shortly after his radio appearance on Sunday, the violence began.

6:30 p.m., Queens: A 52-year-old man named Oscar Gutierrez was stabbed to death by his own brother near Jamaica Avenue and Queens Boulevard.

Cops said the attack stemmed from an argument between the two, which saw the suspect stab and slit his brother multiple times in the chest in a second-floor hallway. Gutierrez was taken to the hospital but was later pronounced dead.

Gutierrez lived in the building where he was killed, New York Daily News reported, with police still trying to track down the suspect as of Sunday night.

The woman was sitting in the courtyard of the houses when she heard gunfire, police said, before feeling a bullet pierce her abdomen. She was taken to Brookdale Hospital and is said to be in stable condition.

It is believed that she was an innocent bystander when she was hit.

8 p.m., Queens: An hour later at 8 p.m., a man was stabbed to death in Queen’s Flushing Meadows Corona Park, police said. His condition has not been reported.

8:24 p.m., Brooklyn: Shortly after, four people were shot dead in Brownsville, Brooklyn, when a fight broke out near the Rockaway Avenue subway station, police said.

A person involved in the brawl opened fire, hitting the 16-year-old boy in the head and a second man in the stomach. Two others were grazed by bullets. The teenager was taken to Maimonides Hospital, where he is said to be in critical condition.

8:45 p.m., Bronx: Citywide violence continued when a 22-year-old woman walking her dog was struck by gunfire near Bristow Street and Jennings Street in the Bronx. The woman was hit in the leg and is unlikely to die.

According to PIX11Officials said they saw a white car traveling north on Jennings and that the shot may have come from the passing vehicle.

9 p.m., Bronx: Minutes later and just blocks away, a 46-year-old mother and her 13-year-old daughter were injured in a shooting on Southern Boulevard, police said.

The couple were in a supermarket when two men argued outside. Then someone opened fire, with bullets flying through the store’s windows, hitting the mother and her daughter.

Police said the teenage girl was hit in the hand while her mother was being scraped on the chest. According to official information, neither of them had life-threatening injuries.

11 p.m. Harlem: A second person died Sunday night when a 34-year-old man was shot dead in Harlem near Malcolm X Boulevard and 115th Street in a hanging-related incident The New York Post reports.

11:15 p.m., Brooklyn: Another man was shot dead – this time on New York Avenue in Brooklyn’s Little Haiti. He was hit in the leg.

11:30 p.m. Harlem: A second man was shot in Harlem. His condition is unknown.

12:20 am Manhattan: In the eleventh incident of the night, a victim was shot and killed near West 22nd Street and Sixth Avenue around 12:20 a.m. Monday in Manhattan.

The attacker fled the scene in a white SUV. Sources say the victim was awake and conscious after being shot, according to the New York Post.

The latest NYPD figures, comparing June 2022 to June 2021, show shootings and homicides are down 24.2 percent and 31.6 percent, respectively.

However, Mayor Adams acknowledged to WBLS that “predatory crimes” — crimes like robberies and burglaries — have yet to be addressed.

Adams said: “Public safety and justice are prerequisites for prosperity. If you’re not sure, you really can’t thrive. Public safety is crucial. Crime really sucked all the oxygen out of the room.”