On a muggy hot morning in the noisy African city of Djibouti, eight-year-old Hassan Kahin was in tears.

His identical twin brother, Hussein – his closest companion – had disappeared in the night, been crammed into a taxi with strangers and shipped off to a new life in a strange land.

The boys had already survived a rough childhood, sent across the border by their mother and siblings in war-torn Somalia. They had learned to cling to each other, to share a bed and eat from the same plate, inseparable.

But now Hassan felt an unbearable pain, as if he had “lost the other half of me”. “They told me I would join him soon, not to cry, Hussein was just going to England before me,” Hassan told the Mail on Sunday. “He would have great chances and soon we would be together.” 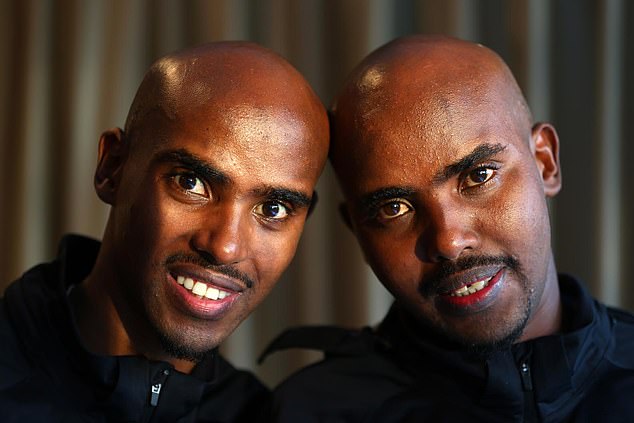 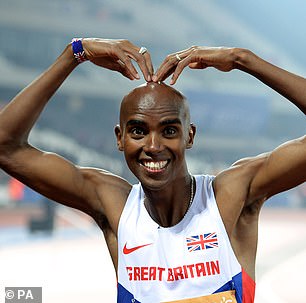 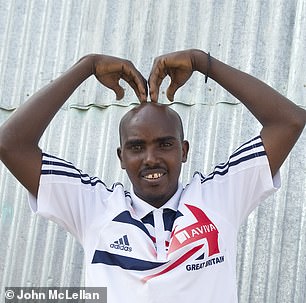 Sir Mo Farah (formerly Hussein Kahin, left) bears a striking resemblance to his twin from whom he was stripped at 8am (right) 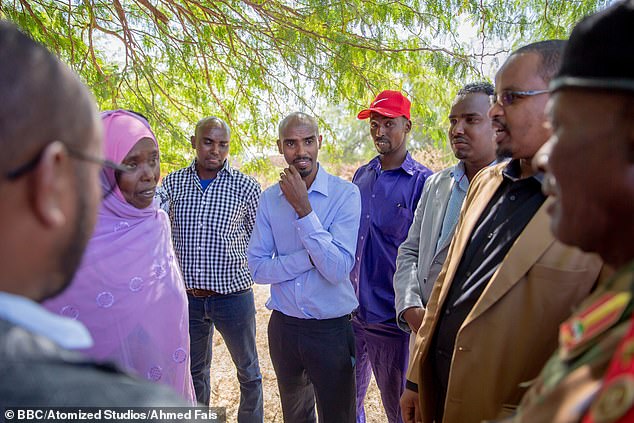 But Hassan would never join his brother. It would be 12 years before the twins met again. At that point, the boy Hassan once knew so well was called Mo Farah and had escaped hellish circumstances to, against all odds, become a world-class athlete, winning championships across Europe.

The extraordinary story of Sir Mo Farah’s true identity and trafficking into Britain as an eight-year-old made its debut in a BBC documentary last week.

The 2012 Olympic hero revealed the story he used to tell about his background – that he was sent to England to live with his father as a child – wasn’t true.

In fact, his real father died when he and Hassan were just four years old, killed by shrapnel while he was herding animals during the Somali civil war.

The twins were sent to her family in Djibouti by their mother. There, Hussein was dragged into domestic bondage, given a false identity as Mohamed Farah, and forced to live a lie.

It is not clear if he was sold to the traffickers for money or by which family member. Hassan had no idea what really happened back then and has since shared how that night in 1992 still haunts him.

‘I was told [Hussein] would hop on a train to Addis Ababa in Ethiopia and take a plane from there,” Hassan said.

“I couldn’t imagine what that would be like. We both believed we had family members in England and they would take us in. They told us everything would be fine. But I felt like I was losing the other half of me, my identical twin. There was an empty space in my heart and they never sent me to it.’

He described how he missed the adolescence pranks they used to pull, such as changing clothes halfway through the school day to confuse their teachers. “No one could tell us apart,” he said. “Once we were sitting on the front steps of the house and I said something naughty to a girl who was walking by. She came back with her brothers to get me in trouble and saw my brother sitting there. They were willing to blame him, but in the end I admitted I couldn’t let him suffer. That’s how it was with him and me.’

Before Mo was sent to England, the twins had lived in abject poverty in a crowded, shack-like dwelling on a dusty street in downtown Djibouti, a hot and humid coastal town where locals hardly benefit from the trading activities at the vast port that serves as the trade gate to the Suez Canal. 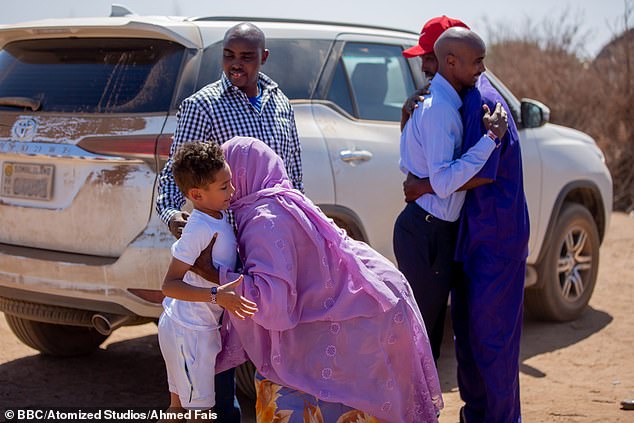 Mo hugs family members during filming for the BBC’s bombshell programme, which revealed his childhood adversities 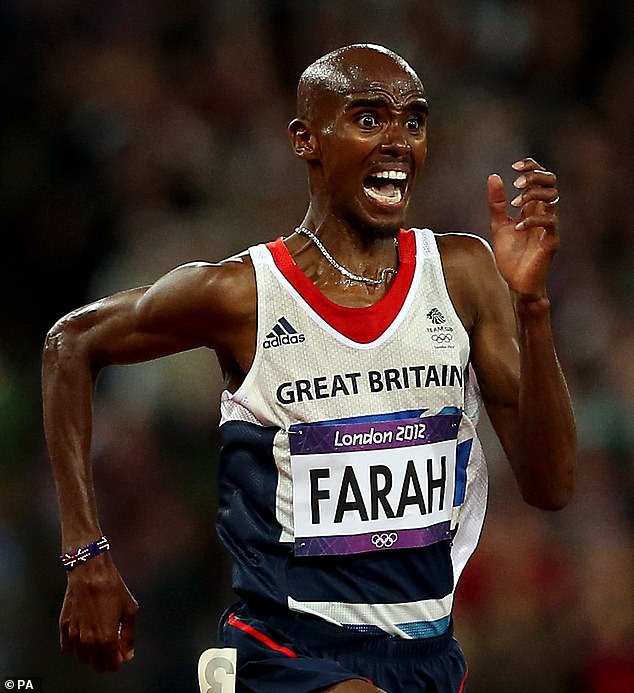 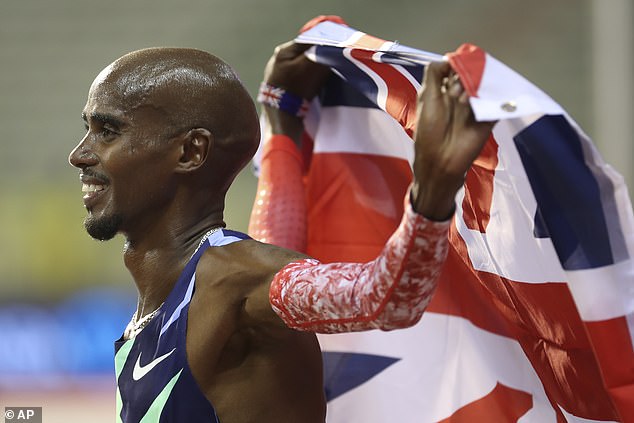 Before Mo was sent to England, the twins had lived in abject poverty in a crowded, shack-like dwelling on a dusty street in downtown Djibouti

But the boys enjoyed school and, according to Hassan, were equal as running partners. “Sometimes I hit him and sometimes he hit me. We chased each other around a lot. Since then he has had the best training and advice in the world with top notch running tracks and gyms to take advantage of while I’m still here and haven’t had anything.

Somehow, in 2004, the successful athlete, now called Mo Farah, found his family and visited them in Somalia.

How much he told them about his beginnings in England we don’t know. The misery of daily drudgery combined with a family of strangers who treated him like dirt and refused to let him go to school; the expulsion and bullying that made him a disruptive student once he finally began attending Feltham Community College in west London; the overwhelming care and kindness of physical education teacher Alan Watkinson, who helped him find a path to personal fulfillment and a glittering sporting career, and who secured his prized British passport.

Hassan and his mother and siblings kept to themselves any terrible secrets they were told.

Obviously emotional, he along with the rest of the family had been nurturing the shocking secrets of his brother’s early life – possibly fearing it would upset Mo’s career and status as a British citizen. Hassan trimmed his mustache and beard and shaved his head to match his famous brother’s appearance. He shared how he hugged the TV and ran into the street screaming with joy after seeing Mo’s success.

But as this newspaper reported at the time, he occasionally had a sad and worried look. He held something back.

Hassan returned to Somalia as a teenager, did well in school and qualified as a telecommunications engineer. On this day in 2012, at his childhood home in the northern Somalia suburb of Hargeisa, he proudly wore his Team GB jersey and posed for photos with the ‘Mobot’ – Sir Mo’s famous pose.

It was claimed yesterday that Nimco Farah, the woman accused of smuggling Hussein into Britain and keeping him a child slave in a flat in west London, is desperate to tell her side of the story – but fears she will not be believed . Her cousin, Abdi Gelle, told Mail Online: “She is in Somaliland and is afraid to return to the UK because she fears she will be arrested and no one will believe her.

“A lot of dangerous things are being said about her being a human trafficker and keeping Mo as a slave. She wants to tell her side of the story but is afraid no one will listen.’

Mr Gelle and other relatives claim Sir Mo was related to Mrs Farah – who is in her 70s – and was brought to the UK with his family’s consent.