The great-aunt of a four-year-old Ukrainian girl killed in her pram in a Russian missile attack cried as she described little Liza’s tragic death.

Tetiana Dmytrysyna said she is waiting to find out if Liza’s mother Iryna will survive her wounds in last Thursday’s rocket attack on Vinnytsia.

Iryna lost a leg in the strike and remains unconscious.

Tetiana told the AP, “She reached for her daughter and Liza was already dead. 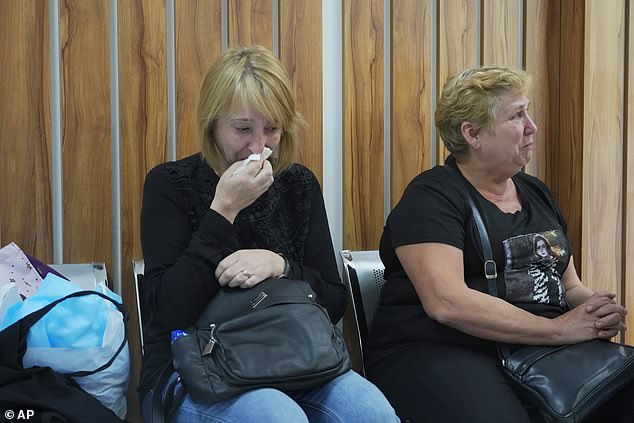 “The mother was robbed of the most precious thing she had.” 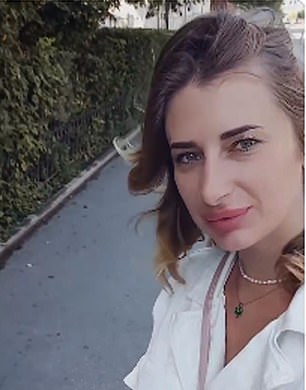 Mother Iryna is unconscious in the hospital and has lost a leg. Your condition is critical

Liza, whose mother ran a blog updating readers on raising a child with Down syndrome, has become the latest face of her nation’s affliction.

Her stroller was charred and crushed when the rocket hit the busy city center in south-west Ukraine at 10.50am.

Irina has previously posted on social media about her fears for daughter Liza, saying she is “afraid to express wishes about the future for her and her country”.

Writing about the fifth birthday that little Liza will now never see, she said: “It was first Covid-19, then the war. I haven’t been able to arrange a proper birthday party for Liza for two years.

“I hope her fifth birthday gives us a chance! I’m afraid to make requests. I only dream of peace and things going the way we want them to.’ 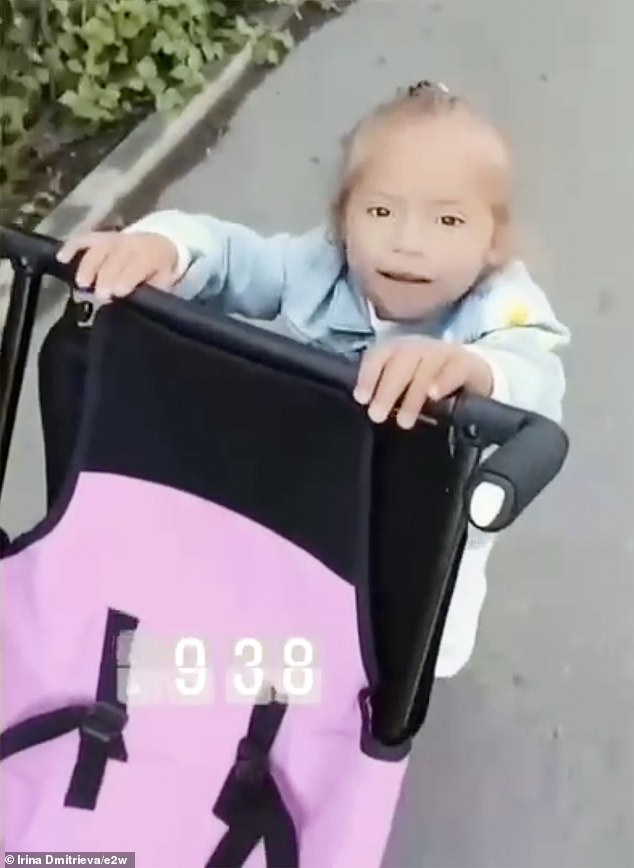 A heartbreaking video, filmed just hours before Liza’s death, shows her pushing her own stroller 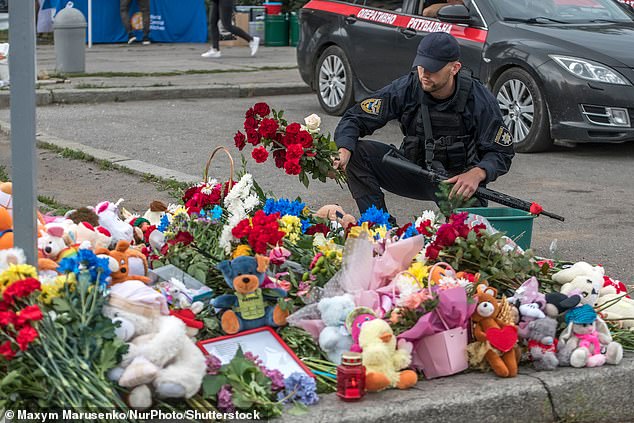 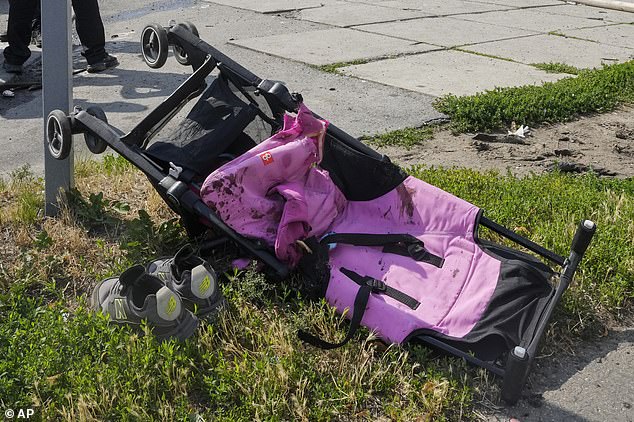 Liza’s pram was later found in the middle of the street, spattered with blood from wounds that the girl did not survive. Iryna was injured and taken to the hospital in critical condition, where she is now fighting for her life 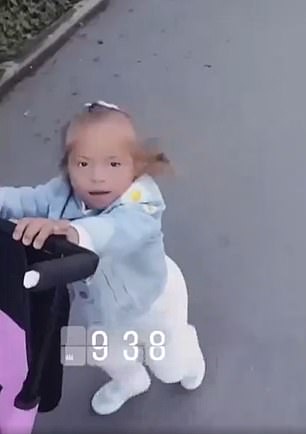 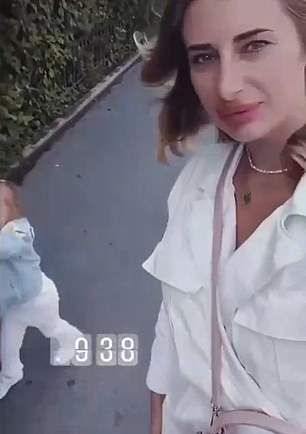 Liza Dmitrieva, four (left), who had Down syndrome, was on a girls’ day out in the Ukrainian town of Vinnystya today with mother Irina (right) and was filmed pushing her own pram – just an hour before a Russian cruise missile killed her

Just six hours before Liza was killed, she had reported on her daughter’s progress despite the pandemic and war.

President Zelenskyy wrote on social media after the attack: “Vinnytsya. Rocket hits downtown. There are wounded and dead including a small child,” he wrote on Instagram.

“Every day Russia is destroying civilians, killing Ukrainian children, aiming rockets at civilian targets where there is no military.

“What is this if not an open act of terrorism? into people. A killer country. A terrorist country.’

“We will bring Russian war criminals to justice for every drop of Ukrainian blood and tears,” he wrote. 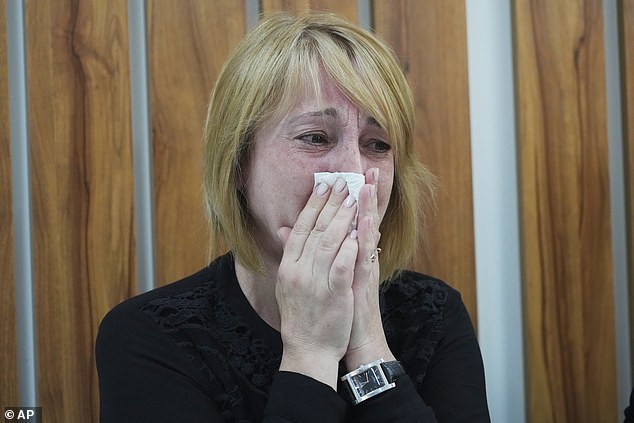 Tetiana cried as she said, “She reached for her daughter, and Liza was already dead.” 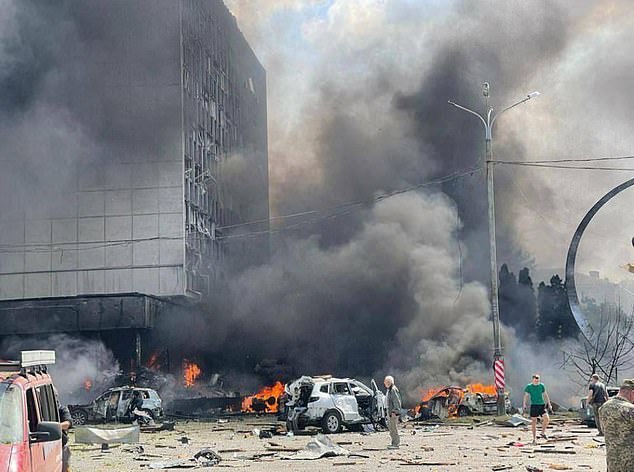 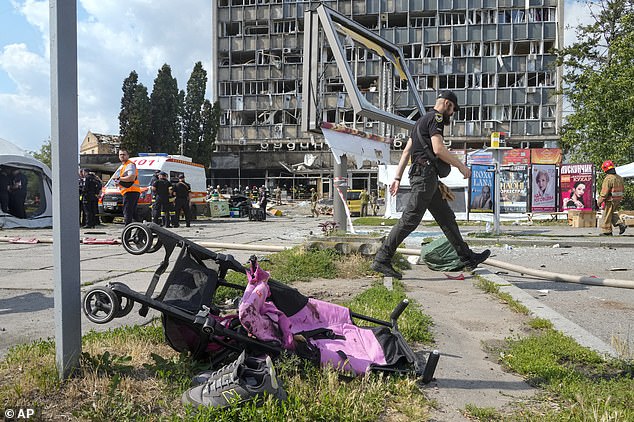 A Russian Caliber cruise missile smashed into this office building in Vinnystya, hundreds of kilometers from the nearest front line, as Liza and Irina walked past – and shrapneled them both

Russia has stepped up attacks on civilian targets in Ukraine as its offensive in the east stalled after capturing two key cities in late June and early July.

Ukraine says Putin’s men are taking an “operational pause” before resuming their offensive, but that hasn’t stopped them from raining death from afar.

The first such strike devastated the Kremenchuk shopping center on June 27, killing at least 20 people but leaving another 36 missing, presumed dead.

Russia tried to deny that it had hit the mall – suggesting it had fired on nearby military targets such as a factory and a railway – and that “collateral damage” had been caused by a fire that spread to the mall .

But CCTV footage clearly showed a Russian anti-ship missile originally designed to take out US aircraft carriers hit the building.

This was followed by an attack on an apartment building in Mykolaiv on June 29 that killed at least eight people, and another on July 1 in Odessa that killed 18 people. 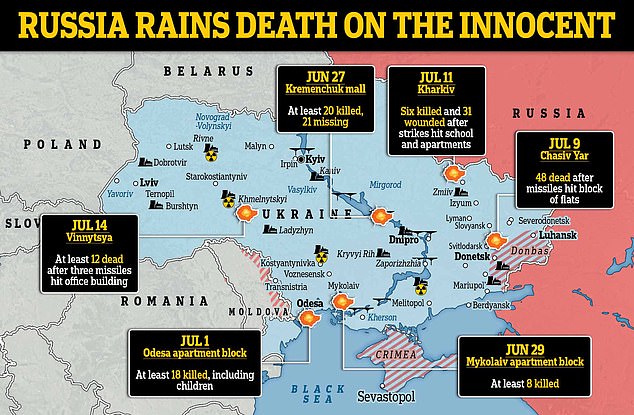 Vinnytsya, 450 miles from the Donbass front line, is just the latest town to be hit by a series of Russian airstrikes on civilians

Shoigu’ gave instructions to further ramp up the actions [military] Groups in all theaters of operations,” local reports claimed.

A 70-year-old woman was among three victims of an airstrike on Chuhuiv near Kharkiv overnight.

A regional police official said Russia fired four rockets from the nearby western city of Belgorod around 3:30 a.m. 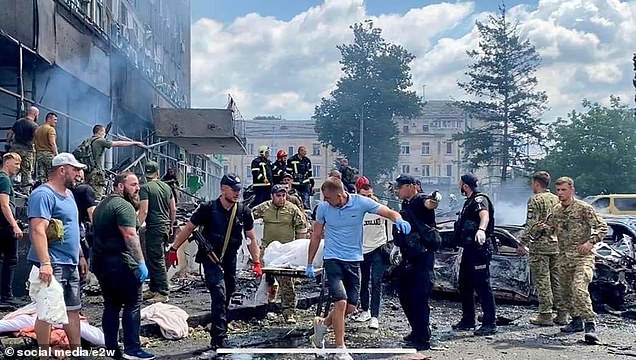 Dozens of people were injured in the attack, many of them in serious condition, in just the recent Russian missile attack on a purely civilian area of ​​Ukraine 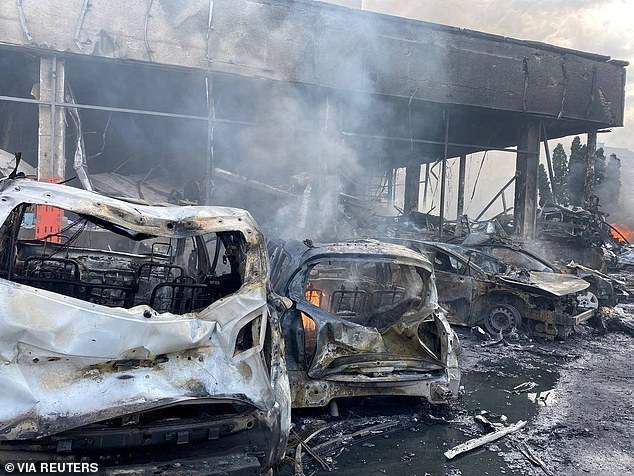 Cars smoke outside an office building in the western Ukraine city of Vinnytsia after it was hit by three Russian rockets around 10.50am on Thursday 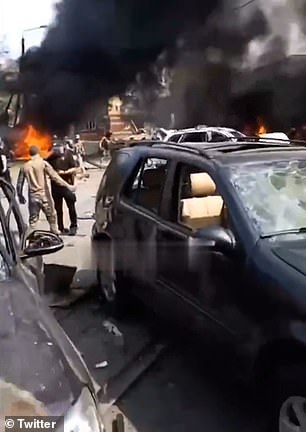 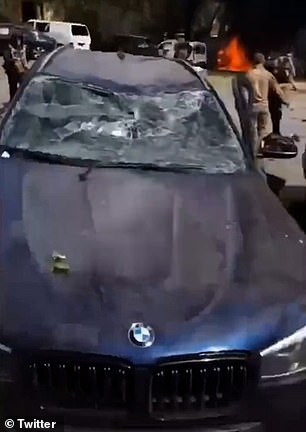 Ukraine’s shortened and straightened defense line in the east has successfully repelled Russian attacks, according to the British Ministry of Defense.

His daily intelligence update this morning states that the “Ukrainian defenses have been successful in repelling Russian attacks since Lysychansk was ceded and the Ukrainian defense line was shortened and straightened.”

It added: “This has allowed the concentration of forces and fire against reduced Russian attacks and helped reduce Russia’s momentum.”