You might expect to find spirits in a bar — but they’re usually the pouring kind.

Patrons of the Legal Tender in Lamy, New Mexico, have long reported some sort of intangible “presence” at the bar, which sits on the site of an old 1881 saloon, but things reached a creepy climax one night earlier this month.

Cindy Lu Jednak and Phillip Heard were sitting at a table with their spouses when they heard the unmistakable screams of a woman coming from the restaurant kitchen.

They checked the kitchen, but it was deserted, the back door locked. 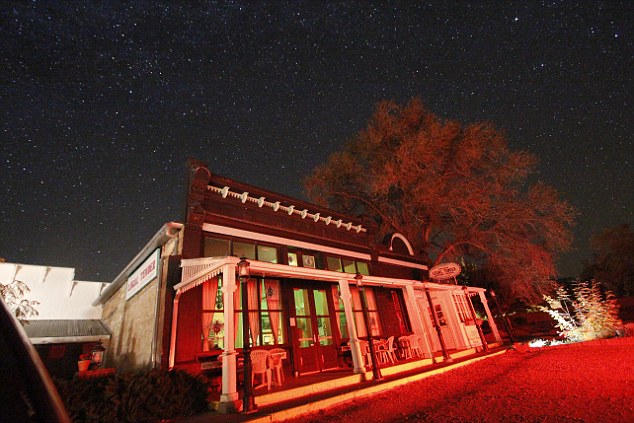 Spooky Saloon: Mysterious screams in the night were heard at the historic Legal Tender Bar.

“I don’t believe in ghosts,” said Heard, who works at Legal Tender. “There has to be an explanation as to what that was. When I’m dealing with something like this, I want to know the facts.’

Two other bar staff, Dachin Frances and Avery Young, say there’s a lot more to the story than that one creepy scream;

“Even if you’re alone in a room here,” says Avery, “you never feel alone.”

And Frances said at the end of a shift she was getting ready to wrap up when she and her colleagues heard pots and pans clattering in the darkened kitchen. Discretion proved the better part of bravery, they slammed the door, locked it and left.

Many employees refuse to stay in the shared after-work hours. 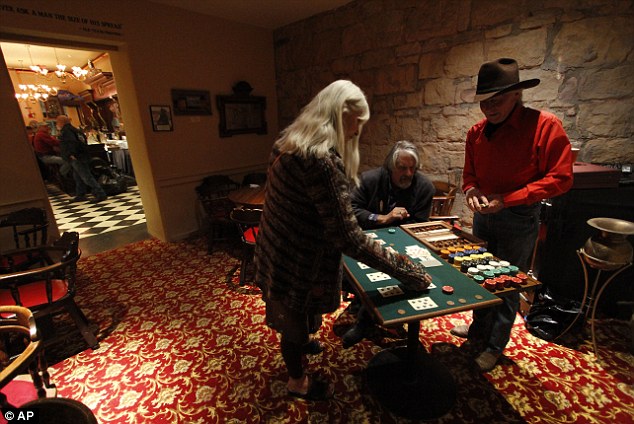 Ghosts of a Chance: Christine Mackenzie, of Galisteo, left, Lewis Hawkins, of San Marcos, center, and Mike McMillan, of Santa Fe, play a hand of Faro in the Legal Tender poker room

There is too much evidence of a grave presence to write off the story as a mixture of fantasy and alcohol,

Both staff and guests have reported unexplained voices and what sounds like a heavy object being dragged across the main dining room floor. A chandelier hanging over this room has more than once begun to sway wildly without the slightest breath of wind.

For those familiar with the legal tender, it makes sense that some of its long-dead clients are still around.

A shop first opened on the Legal Tender site in the early 1880s, catering to the trade introduced by the newly built branch line of the Atchison, Topeka and Santa Fe Railway. Eventually the old saloon became known as the Pink Garter.

In the late 1960s it was renamed the Legal Tender under the ownership of R.O. Anderson. “Wichita Lineman” singer Glenn Campbell played there in his early days. 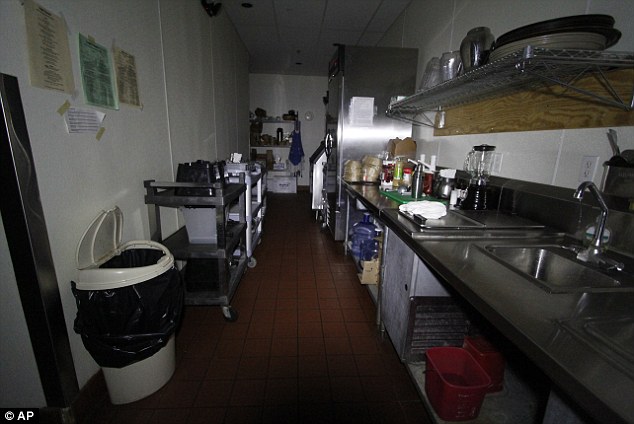 Rattle pots and pans: The kitchen has been the focus of several spooky happenings

The building was listed on the National Register of Historic Places in 1984. A number of historical figures have passed through the Lamy area over the years, including Teddy Roosevelt and Billy the Kid – the latter was reportedly on a train that stopped in Lamy en route to a Santa Fe prison term.

Lesser-known figures also made their way through the village, and perhaps never quite left it — the frontier worker who was reportedly hit by a stray bullet during a poker game gone awry, and the train passenger who reportedly died of appendicitis in a back room of the saloon. for example.

Their ghosts – known as the Man in Black and the Lady in White – have long been said to roam the Legal Tender.

The ghost of a young girl is also associated with the site, although no one has ever fully worked out her backstory.

But Cindy recently met a woman in her 90’s living in Lamy in the 1920’s and remembers a female playmate from that time who died of tapeworms at the age of 7 or 8. The two girls often visited the shop that once stood on the site Legal Tender. Cindy also tells anecdotes of kitchen workers feeling the invisible prick of a finger in their sides and a presence tightening their apron strings. 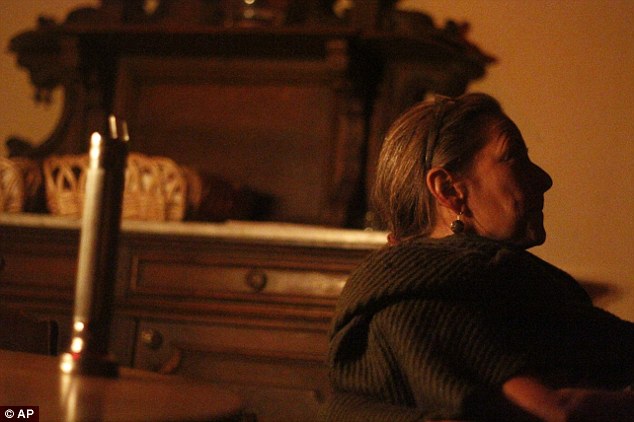 Cindy Lu isn’t afraid of the ghosts of legal tender — but she still keeps a flashlight handy, just in case.

Cindy Lu’s non-profit organization Learning Mind has partnered with the Lamy Railroad and History Museum to revitalize legal tender. She and other volunteer workers reopened the restaurant last spring. It serves food Thursday through Sunday and most public holidays. Employees often sit around for a half-hour or so after closing to talk about work — and exchange spirits stories .

Parapsychologist Joni Alm has conducted about five investigations in the Legal Tender over the past six months, using a high-tech audio recorder and a “ghost meter,” a device that registers changes in electromagnetic fields, potentially revealing paranormal energy.

This ghost knife flashes red when it encounters inexplicable energy, and it nearly went insane during a recent late-night tour of the kitchen area, around the same time a New Mexico photographer’s flashlight went out. The batteries were new. The flashlight was working fine as he left the restaurant.

A four-hour ghost hunt on a recent October night produced a chorus of inexplicable noises: although Cindy admits the ice machine sometimes makes a noise that sounds like a distant gunshot.

Alm’s ghost counter lit up when Beethoven’s “Moonlight Sonata” was played – “If anything brings out a ghost, it’s this,” said Heard.

Alm recorded strange noises on her audio recorder, including what appeared to be ghostly whispers and, at one point, a man’s voice saying “go away.”

“I have a strong feeling that there are multiple entities in there, at least three,” she says.

She felt the spirit of that child in her presence at least twice, she said. She also senses a masculine energy. “There is no fear at all. I actually sense a sense of impatience from the Man in Black spirit, like he wants his space back,” she said, laughing.

Cindy doubts the lady in white or the man in black are still around. She said various “purges” have taken place inside the building over the past few decades to exorcise the ghosts, and perhaps both of those vintage cars are gone.

But Cindy is sure there’s a resolute feminine energy at work. She has reason to believe it’s a more contemporary ghost, that of a young woman who went missing in the area not long ago.

Cindy is reluctant to call what is happening at Legal Tender haunted. “It’s just a presence, an energy of someone or something that’s here,” she said. “It’s an energy from another time; even from another dimension.«

And she said she’s never scared — not even when she hears inexplicable whispers or has her name called by others when she’s alone in the building.

VIDEO: Inside the legal tender!…