Some mocked it before it was even unveiled, sneering that it was boastful and fussy.

Yet Queen Victoria adored this 176ft-high homage to her late husband, following his premature death from typhoid at the age of 42.

The Albert Memorial, standing opposite London‘s Royal Albert Hall in Kensington Gardens, remains one of Britain’s best-known and most recognisable monuments a century and a half on from the day it was opened by Victoria (who footed a large part of the £120,000 bill herself — almost £10 million in today’s money).

This month, to mark its 150th birthday, special tours have been planned, while engineers have been giving the structure a thorough inspection to ensure that the edifice is good for another generation. And, having joined them on their rounds, I can report both good news and bad. On the plus side, the Albert Memorial is in very solid shape, ready for all the 21st century can throw at it.

However, on the debit side, this has to be among the most un-woke, politically incorrect landmarks in the public realm.

It is just as well the memorial is sealed off by thick metal gates. For, on closer inspection, its enthrallingly ornate artwork (depicting every aspect of human genius and Victorian progress) should carry a trigger warning. There is enough ‘cultural appropriation’ and brazen colonialism on here to give ordinary woke folk a fit of the vapours — including a naked African, a bare-breasted Indian woman, a Cherokee warrior and a clear, overarching message that Victorian Britain (and the Royal Family) really did represent the apex of human achievement. Even Michelangelo, Shakespeare and Mozart are on here, paying tribute to the Prince Consort. 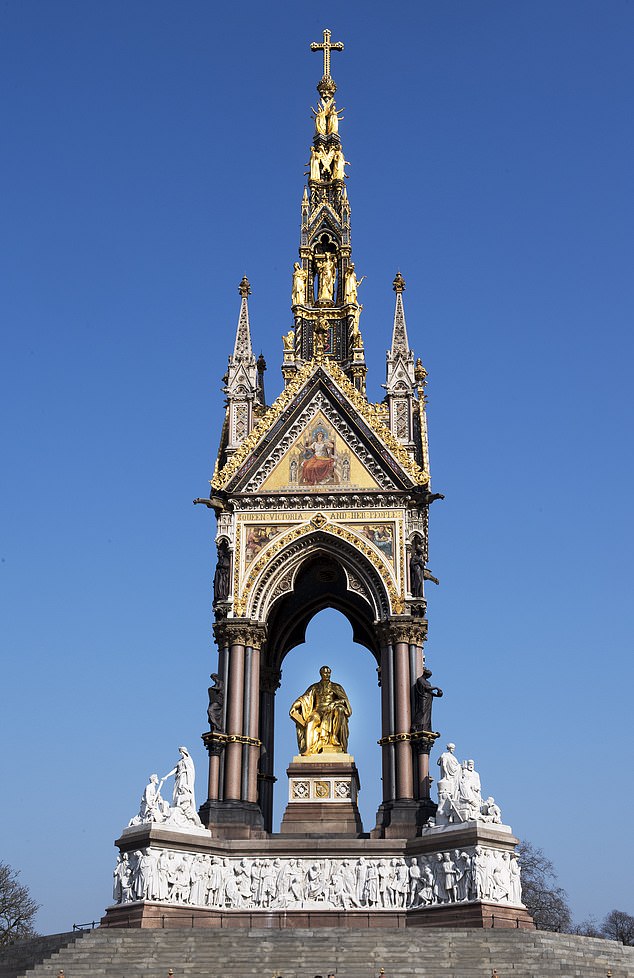 The Albert Memorial, standing opposite London’s Royal Albert Hall in Kensington Gardens, remains one of Britain’s best-known and most recognisable monuments a century and a half on from the day it was opened by Victoria

Just as striking, however, is the bit of the Albert Memorial no one gets to see. For tucked away below ground, accessible only via a locked manhole, the engineering team from the Royal Parks charity take me inside a vast vaulted labyrinth stretching endlessly into the gloom.

It goes on and on like the catacombs — until you realise you are actually going round and round a series of concentric circles.

This is a monument in itself to the technical rigour and pride which went in to Victorian engineering. For while the external part of the memorial has required substantial restoration work — not least because of the damage inflicted by two world wars and acid rain — the foundations are in astonishing shape. It’s just a dirt floor down here and yet it is entirely dry.

The only hazards are the odd pile of stones or broken paving left by a Victorian workman. There is a bit of moisture on a wall in places, but no smell of damp or rot.

Those scrupulous Victorian engineers were taking no chances building a giant monument above a layer of London clay. They dug down until they found gravel, then sunk 17ft of concrete to give all this stability in perpetuity.

Next, they built a series of brick arches — more than 800 of them —and they all look bewilderingly clean and tidy.

There are chambers leading off other chambers as you progress through this underground maze to a tunnel which leads in to a vast central cellar the height of a house. Here, a solid square pillar 6ft across and more than 30ft tall is propping up the hefty statue above. 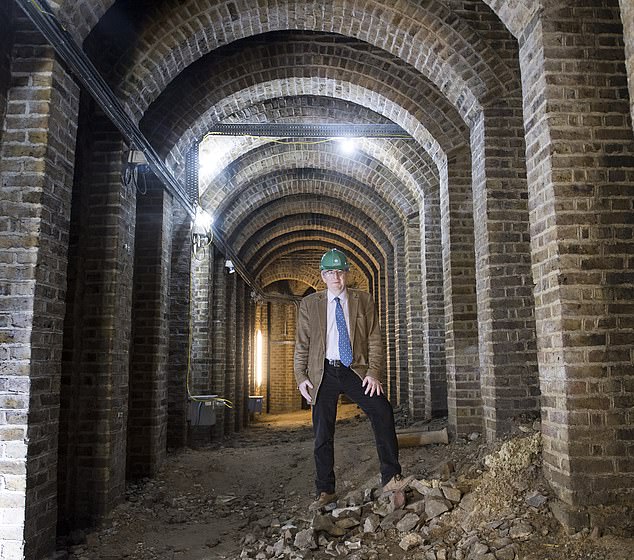 Just as striking, however, is the bit of the Albert Memorial no one gets to see. For tucked away below ground, accessible only via a locked manhole, the engineering team from the Royal Parks charity took Robert Hardman inside a vast vaulted labyrinth stretching endlessly into the gloom

This all looks as if it could have been built in the past few years. And yet this brickwork is exactly as it was back in 1872 on the July day when Queen Victoria came to open the memorial.

The Prince Consort, all 12 tons of him, sits above, gleaming away in the sunshine thanks to a £50,000 outer layer of 23-carat gold leaf. ‘Considering that Albert said he did not actually want a memorial to himself, it is quite something,’ observes Matt O’Farrell, conservation adviser to the Royal Parks, which has 180 listed structures in its care. Few rival this one in terms of both fame and complexity.

Matt talks me through the internal politics and the rows which dragged on for ten years before the monument was open — and even then it was another four before the statue of Albert himself was added to his plinth.

The memorial was designed by the 19th-century architect, Sir George Gilbert Scott, the man behind classic Victorian edifices such as St Pancras railway station hotel and the Foreign Office.

He was chosen after a competition which saw several proposals for Albert to be depicted astride a horse or in full Roman garb — which many regarded as the epitome of enlightenment — or both.

Scott favoured a vast canopy in the Gothic tradition which proved so popular in the Victorian era. Hence the severe verticality of the structure and all those sharp, pointy bits. In later years, humorists — including Spike Milligan and Private Eye magazine — would depict it as a space rocket waiting for take-off.

The memorial would not just be a homage to Albert. It also honoured the Great Exhibition which he created in neighbouring Hyde Park, a triumphalist celebration of both British imperialism and human ingenuity. For an appreciation of how the Victorians viewed their place in the world — and in world history — this beats any museum.

At the four outer corners are depictions of the four great continents. ‘Africa’ includes a near-naked black African tribesman receiving ‘knowledge’ from a white female creature depicting ‘European civilisation’. ‘Asia’ features a bare-breasted maiden astride a fabulously detailed recumbent elephant, surrounded by a Chinese potter, a Persian poet, an Indian soldier and an Arab with the Koran. 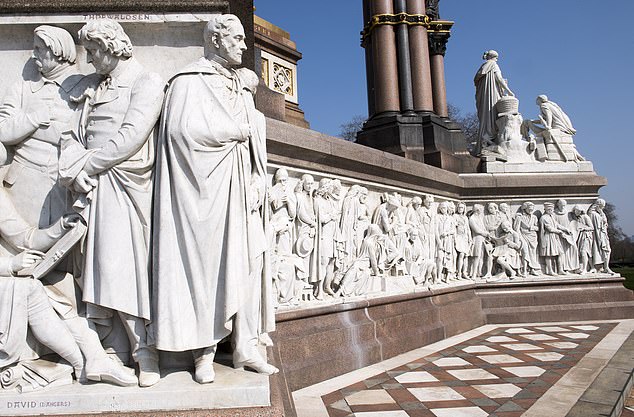 The ornate artwork (depicting every aspect of human genius and Victorian progress) should carry a trigger warning. There is enough ‘cultural appropriation’ and brazen colonialism on here to give ordinary woke folk a fit of the vapours — including a naked African, a bare-breasted Indian woman, a Cherokee warrior and a clear, overarching message that Victorian Britain (and the Royal Family) really did represent the apex of human achievement

‘America’ includes a Native American chief in feathered head-dress, an Aztec and commanding female figures representing Canada and the U.S. taming a bison. Interestingly, ‘Europe’ depicts Germany (Albert’s homeland) as a peaceful nation reading a book, while France is the bellicose, warrior element holding a sword. Britannia, meanwhile, holds a trident to illustrate Britain’s command of the seas.

From here, you walk up the granite steps to the foot of the memorial surrounded by what, to my mind, is the most impressive element of the whole thing, the friezes depicting artistic brilliance through the ages.

On the south face, we find the greatest figures in music and literature. There is sculpture (to the west), architecture (to the north) and painting (to the east). There are 169 figures (nearly all male, ranging from Homer and the Greek sculptor, Phidias, to Raphael and Sir Christopher Wren).

The original stipulation was that only the dead could be included, though Queen Victoria made an exception for Sir George Gilbert Scott, who can be spotted lurking modestly at the back.

The next tier of statues has four groups depicting the ‘industrial arts’, manufacturing, engineering and suchlike, of which Albert had been such a champion. As the memorial moves up, so there are statues depicting the ‘sciences’ (medicine, philosophy etc).

Above them are the ‘virtues’ (faith, hope, charity and so on) and finally some euphoric angels, arms raised aloft, beneath the orb and cross at the top.

And sitting in the midst of all this is John Foley’s sculpture of a seated Albert, deep in thought, wearing his Garter robes and thumbing through a catalogue of his Great Exhibition. He looks out towards the great academic quarter of the capital — including Imperial College and the Natural History Museum — which many still call ‘Albertopolis’.

For the first few decades, he was as golden as he is today, until it was decided, in the middle of World War I, that he should be de-gilded. No one is entirely sure of the logic but it is assumed that he was too conspicuous to enemy Zeppelins. In World War II, the memorial suffered bomb and shell damage. 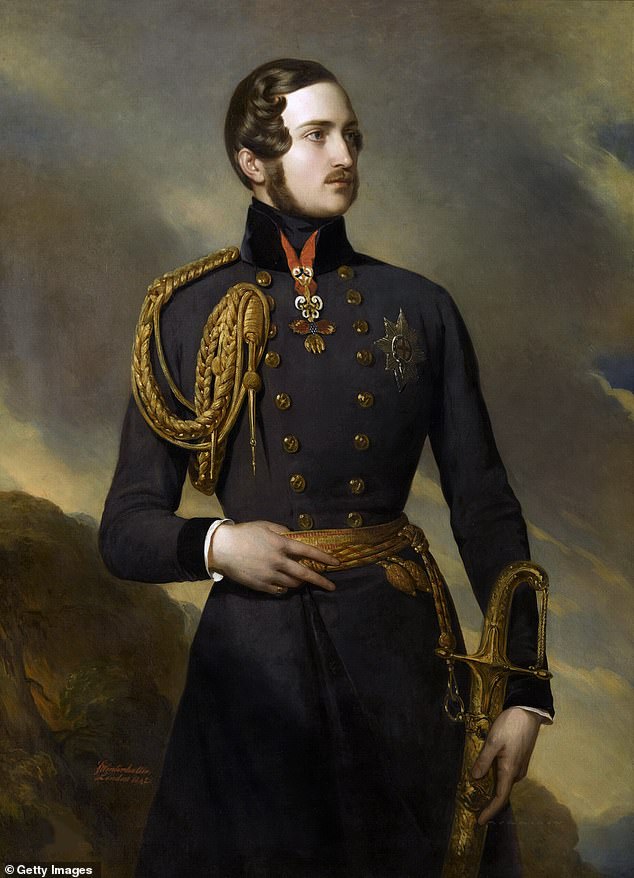 Portrait of Prince Albert of Saxe-Coburg and Gotha (1819-1861), painted in 1842. It was found in the Collection of Musée de l’Histoire de France, ChÃ¢teau de Versailles

A friendly anti-aircraft gun is believed to have been responsible for toppling the cross from the top. After the war, it was hastily reattached but facing the wrong way. Soon, the monument started to look more and more forlorn, caked in soot and grime and generally unloved. Even at the time of its opening, it had plenty of critics. ‘A confection of gingerbread,’ sniffed one courtier. By the post-war era, it was regarded as a hideous, crumbling symbol of a widowed Victoria’s hysterical devotion to her late husband.

In 1983, when bits started falling off dangerously close to passers-by, it was boarded up. There was even a plan in Whitehall to have it demolished.

However, a passionate campaign by the Victorian Society and others, ensured that £11 million was found for a full refurbishment. In 1998, the Queen herself came to unveil the result and to see Albert back in his gilded splendour, as he remains to this day.

Sadly, the threat of vandalism also meant that a new fence was erected all the way around the base. As a result, 21st-century visitors cannot see all the details close-up, although a series of public tours are available in the coming months.

The great brickwork warren below remains untouched and unseen, its superb craftsmanship known only to the Royal Parks’ engineers. However, it also means that Albert is sitting pretty long into the future.

All this raises one further question: how will our present Queen decide to remember her own consort? Both were great, great-grandchildren of Albert.

Prince Philip was also a great admirer of the Prince Consort, with whom he shared many passions — not least a love of science and engineering as well as the Chancellorship of Cambridge University.

But a memorial like this? It is safe to say he would have loathed the idea.

Book a tour of the memorial at royalparks.org.uk/whats-on/upcoming-events