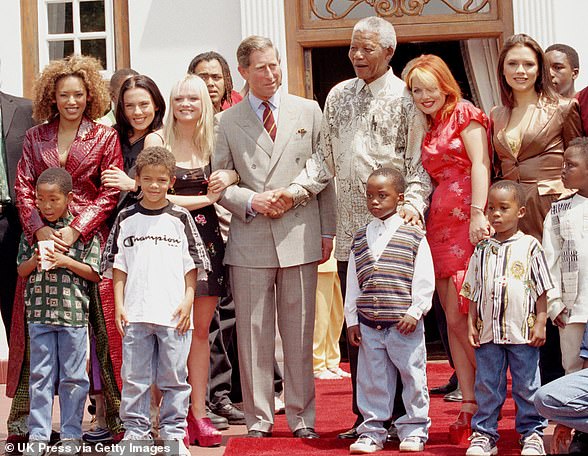 Prince Charles with the Spice Girls meeting Nelson Mandela in 1997

Nelson Mandela was arguably the world’s most powerful symbol of the fight against apartheid thanks to his bravery in the face of persecution.

He was known for trying to unify South Africa after its long history of division and was affectionately called ‘Madiba’, his clan name, meaning ‘grandfather’.

Mr Mandela led South Africa towards multi-ethnic democracy and was imprisoned for nearly three decades for his struggle against white minority rule.

When he became South Africa’s first black president in 1994, he said: “The time has come for the wounds to be healed. The moment has come to bridge the chasms that separate us. We have finally achieved our political emancipation.’

A year earlier, Mandela was awarded the Nobel Peace Prize, which he shared with FW de Klerk, the white Afrikaner leader who freed him from prison.

He became a global advocate for human dignity before officially leaving public life in June 2004, telling his country: “Don’t call me. I’ll call you’.

Mr. Mandela, who defended himself in his own treason trial in 1963, married three times and had more than 30 children, grandchildren and great-grandchildren.

He married his first wife Evelyn Mase, who was a cousin of his political mentor Walter Sisulu, at the age of 26 – and they were married for 13 years and have four children.

His romance with second wife Winnie Madikizela-Mandela, 16 years his junior, began while he was on trial for treason.

He then married his third wife, Graca Machel – the widow of Mozambique President Samora Machel, who died in a plane crash – on his 80th birthday in 1998.

Already with six stepchildren and two of her own, she helped him through his final years, but admitted, “It hurts to see him age.”

Mr Mandela was treated for tuberculosis in the 1980s and had surgery to repair eye damage in 2001, as well as prostate cancer treatment.

After retiring from politics, Mr. Mandela gradually withdrew from the public eye and made his last significant public appearance at the 2010 World Cup in South Africa.

His death came on the day the Duke and Duchess of Cambridge attended the London premiere of the biopic Long Walk to Freedom, in which Idris Elba played Mr Mandela.

Mr Mandela died at home in December 2013 at the age of 95 after a long illness.