Salary packages are falling at a record pace like inflation is raging – but the job market still seems strong.

Adjusted for inflation, however, both metrics declined — with total compensation versus CPI shrinking 1.9 percent over the three months and regular compensation falling 3.7 percent.

Despite grim pressures on the cost of living, the job market appears to be holding up, with the unemployment rate down 0.1 percentage point from the previous quarter to 3.8 percent.

The number of people employed rose by 31,000 in June to another high of 29.6 million. And job vacancies remained near their peak in the three months to June at just under 1.3 million.

Chancellor Nadhim Zahawi welcomed the job numbers but said he was “very aware” of the pressure on budget finances. 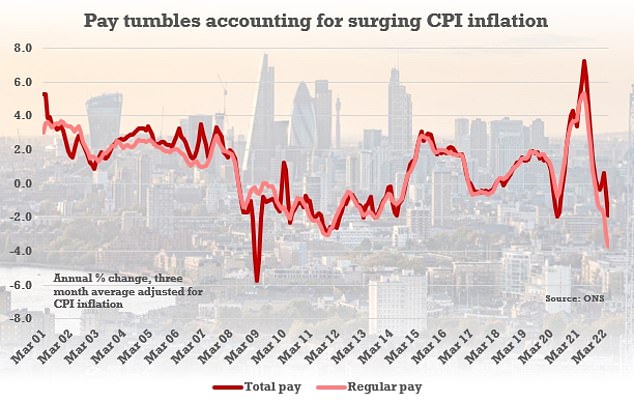 Total compensation fell 1.9 percent compared to the CPI in the three months to May, and regular salaries fell 3.7 percent. The latter was the worst result since the statistics were compiled in 2001 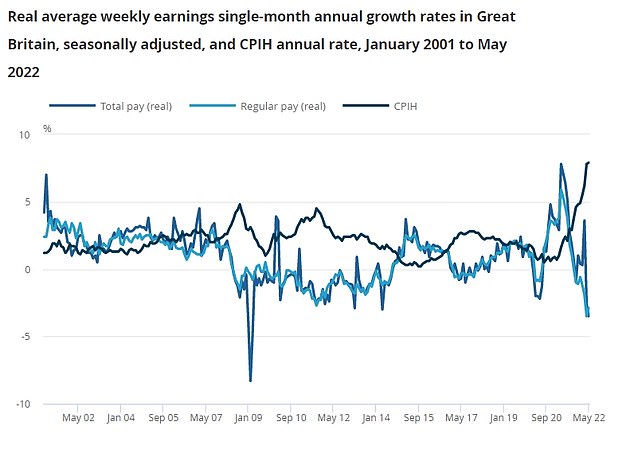 As ministers prepare to unveil a range of collective agreements in the public sector today, figures show that government employees grew 1.5 percent in the quarter to May, compared with 7.2 percent in the private sector.

The financial and business services sectors and the construction sector showed the largest growth rates at 8.2 percent and 8.1 percent, respectively, driven by strong bonus payments.

“With demand for labor clearly still very high, unemployment has fallen again, employment has risen and there has been another record low in layoffs.

Mr Zahawi said: “Today’s figures underscore how strong our labor market remains and offer encouragement in uncertain economic times – as we know, a job is one of the best ways for people to get ahead and support their families.

“I am well aware that rising prices are affecting the level of people’s hard-earned income, so we are helping households through cash grants and tax cuts.

“We are working with the Bank of England to curb inflation by providing £37 billion of cost-of-living support this financial year and investing in skills to help people find work and progress. “

Despite grim pressures on the cost of living, the job market appears to be holding up, with the unemployment rate down 0.1 percentage point from the previous quarter to 3.8 percent