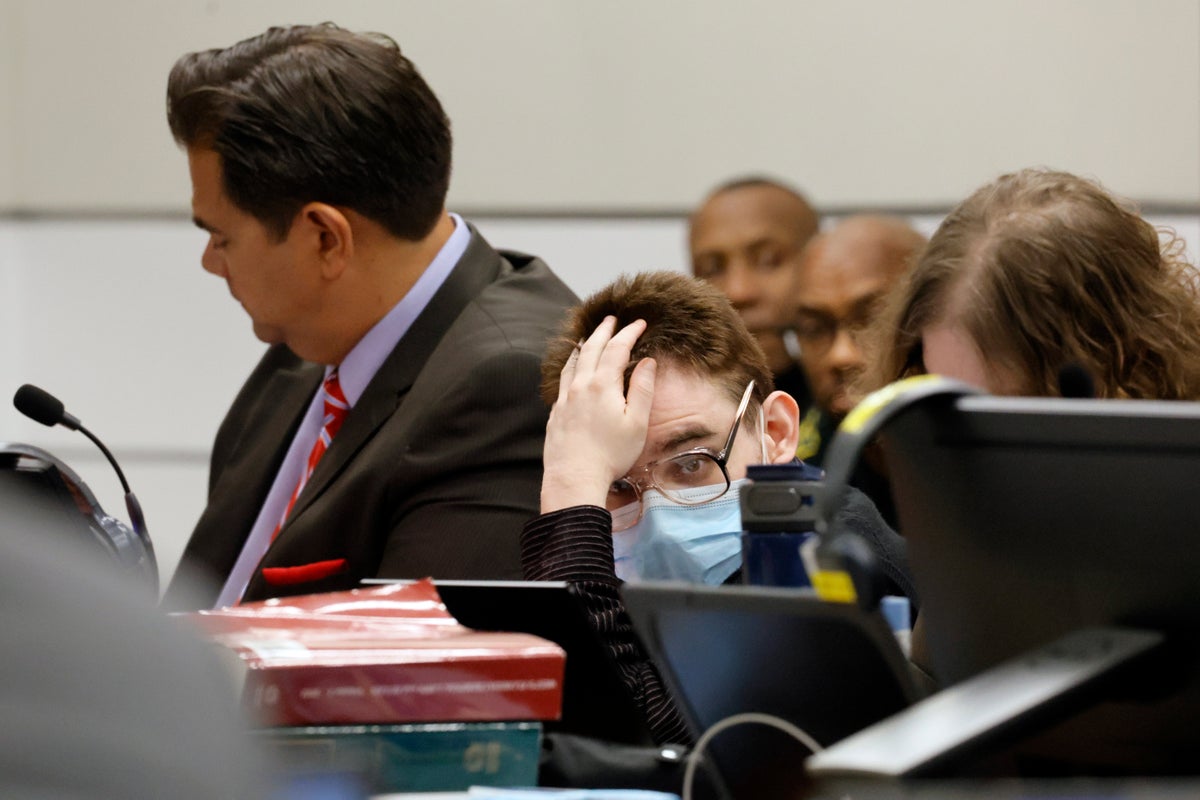 On the second day of the sentencing phase in the trial against Nicholas Cruzwho carried out one of the worst mass shootings in US history Marjory Stoneman Douglas High SchoolSurviving teachers and students told the jury about their experiences of that day.

Several jurors gasped and covered their mouths in shock as cameras followed the gunman in his rampage around the 1200 building on the high school’s campus parklandFlorida.

In his opening remarks on Monday, prosecutor Michael Satz detailed the events of the massacre, detailing when and where individual Cruz victims were killed, down to the minute, and the jury now saw it all before them.

After the video was shown, a group of survivors – those most injured during the attack – appeared in court to put together a harrowing account of the events of that Valentine’s Day four years ago.

College student Christopher McKenna testified about his encounter with Cruz in the building’s stairwell on his way to the restroom just before filming began. The then 19-year-old, who was holding an AR-15, shockingly told him to get out because “things were going to get bad.”

Mr McKenna said he ran from the building and alerted Coach Aaron Feis just before the shooting began. Mr. Feis took the newcomer away from the scene and then went to the examination. He became one of Cruz’s victims.

When asked who he saw in the stairwell that day, Mr. McKenna stood and pointed directly at Cruz.

The court heard from survivors William Olson, Alex Dworet and Kheshava Manhapuram, all aged 14 at the time and in the same English class that Mr McKenna had left.

Mr Olson recalled hearing the first shots and wasn’t sure what was going on at first. He found himself on the floor next to the teacher’s desk and saw that his friend Alex Schachter was still sitting at his desk and didn’t move. Mr Olson was wounded in the arm and his parents, seated in the gallery, were visibly upset at his account of the attack.

Mr Dworet, who was sitting near Mr Olson, was similarly injured, suffering a wound to the back of his head in the first few moments. He, too, recalled seeing Mr. Schacter mortally wounded, still at his desk.

Mr Mangapuram was hit in the side of his stomach when shots rang through the classroom door, and he recalls that Mr Olson and Mr Schacter were also hit.

The day’s most emotional testimony came from Dara Hass, who taught the class in which the three boys were injured and in which Mr Schacter died. Ms Hass recalled screaming and the air was thick with smoke as debris flew through the room. She remembered each of the students by name and spoke of tending to the injured after the police arrived.

In an adjoining room, a class was being taught the history of the Holocaust. Juniors Isabelle Checker, Daniella Menescal, Samantha Grady and Samantha Fuentes stoically recounted the confusion as they and their classmates sheltered out of sight of the window in the locked classroom door.

They recalled the students moving filing cabinets to better protect themselves from the gunfire and crawling across the floor for better cover. Everyone was injured by shrapnel, ricochets or abrasions.

Ms Fuentes received a gunshot wound above her knee and to this day has shrapnel lodged in her body, including behind her eye. She continues to have problems with her range of motion and endurance.

Everyone remembers that students Nick Dworet and Helena Ramsay, both 17, were fatally shot. Mr Dworet’s brother Alex, who previously testified, was lying injured in a nearby English class. Ms Grady recalled Ms Ramsay spurring her into action when the shooting started and being by her side.

Upstairs, student Ana Martins and teacher Michael Powell were in a study hall meeting when Cruz launched his attack. Ms Martins, 14, described how she and a friend were talking to Gina Montalto, who was working on a laptop in the hallway outside the locked classroom, when they returned from the bathroom.

Back at their desks, she had stood to let Luke Hoyer and Martin Duque, also both 14, back into the locked room when the first shots rang out. Before she reached the door, she was pulled away by a friend and they ducked under the teacher’s desk. Gina, Luke and Martin were all killed.

Mr Powell believed the initial loud bangs were part of a promised drill and ordered the children in his class to stay away from the door. When the noise continued and it became clear that it was not an exercise, he checked that the door was locked and let in a boy from the hallway and four girls who were hiding in the toilet across the street.

Each testimony was met with silence by the court and the families shed tears in the gallery.

Just like on the first day of the trial, Cruz kept his head down next to his attorneys and appeared to be writing or doodling on the pad in front of him.

Having already pleaded guilty to 17 counts of murder, the 12-member Florida jury is instead tasked with deciding his punishment: either the death penalty or life in prison without parole.

The jury of seven men and five women chosen from a pool of 1,800 candidates must unanimously agree to hand down an execution sentence.

The hearing will continue on Wednesday.