Anyone who loves The Godfather knows the scene where a pretty bouquet of flowers arrives for the title character, Marlon Brando’s Don Vito Corleone. They were sent by Johnny Fontane, the Frank Sinatra-esque crooner who, thanks to the brawn of the Corleone family (and a severed horse’s head in a movie tycoon’s bed), has landed a coveted role in a new movie.

There’s a nod to this scene in The Offer, a riveting ten-part drama about the making of Francis Ford Coppola’s 1972 masterpiece on Paramount+ that might have slipped under your radar when it was released on the new streaming service last month, but you should hurry to check it out, as reviews are calling it “absolutely brilliant” and “a hell of a series”.

In the first episode, flowers arrive in the form of a funeral wreath for real-life New York gangster Joe Colombo (Giovanni Ribisi), sent by Sinatra (Frank John Hughes) with a note: “Hopefully we can make this thing go away. ‘

Sinatra recognized himself in the Fontane character and loathed Mario Puzo’s novel The Godfather. When Paramount Pictures announced it was making a film with Puzo writing the script, Sinatra was furious. 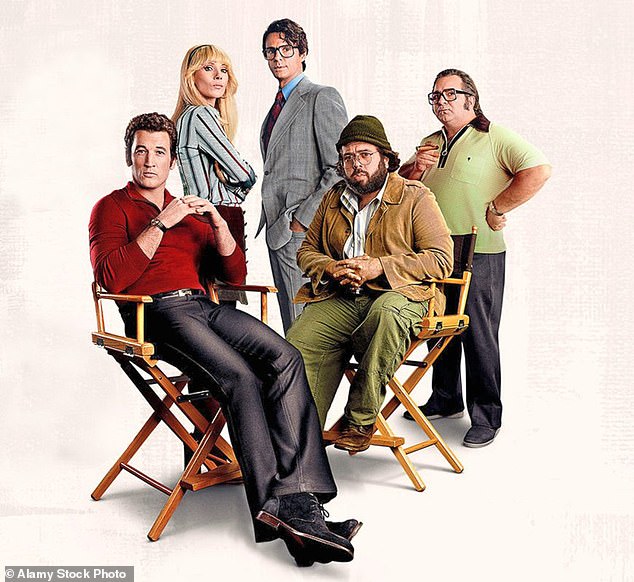 From left: Ruddy, McCartt, Evans, Coppola and Puzo in The Offer, a gripping ten-part drama about the making of Francis Ford Coppola’s 1972 masterpiece on Paramount+

One night, the two Italian-Americans had an altercation at an LA restaurant that resulted in Ol’ Blue Eyes seeing red, yelling that Puzo was “a pimp” and threatening to beat him like hell.

This story had always fascinated screenwriter Michael Tolkin and alone inspired him to create The Offer. “So I had written five minutes of the show and now it took me nine hours and 55 minutes to complete it,” says Tolkin, who satirized the way Hollywood worked in the 1992 film The Player.

He found no shortage of material, beginning with the famous line of dialogue that inspired his title – Don Corleone’s ominous death threat: “I’ll make him an offer he can’t refuse.” Intriguingly, The Offer evokes both the mob menace as well as the machinations of the film producers to life – and finds hardly any ethics in either camp.

He was then asked to produce The Godfather, which Puzo himself had introduced to Paramount executive producer Robert Evans (English actor Matthew Goode) in 1967, when the book (tentatively titled Mafia) was still mostly unwritten.

The offer perfectly dramatizes Puzo’s predicament. He was a New York blue collar worker turned writer, but he wasn’t well known and any financial success he had was undermined by his gambling habits.

By the time he met Evans, he had a wife and five children to support, but was $10,000 in debt. He desperately needed Evans to acquire the film rights.

Eventually Evans did, paying $12,500, but almost more to get rid of him than anything else.

Ol’ Blue Eyes saw red, yelled at Puzo that he was “a pimp” and threatened to beat him to death

Over time, the book became a huge bestseller. Evans had a hot trait, but still wasn’t sure if it would translate to screen.

However, he had the support of Paramount’s eccentric owner Charles Bluhdorn, a cigar-chomping Austrian tycoon. Bluhdorn wanted The Godfather to be made, but to get that done, Ruddy had to spend months placating the Mafia — not least by agreeing to their wish never to use the word “Mafia.”

He also indulged their vanity by casting actual gangsters as extras. When the film was finally finished, Ruddy arranged a discreet screening for her.

Not that it remained discreet as dozens of flashy limousines pulled up in front of the cinema and spat out Weise and her companions.

Ruddy, now 92, is the executive producer of “The Offer,” and Teller often texted him during filming to say how much fun it was playing him. And no wonder.

Before he hooked up with Joe Colombo, Ruddy regularly received death threats and even went public in a Groucho Marx costume. “You want to make a movie that makes my people look like animals, and that’s not going to happen,” Colombo tells Ruddy in the drama. 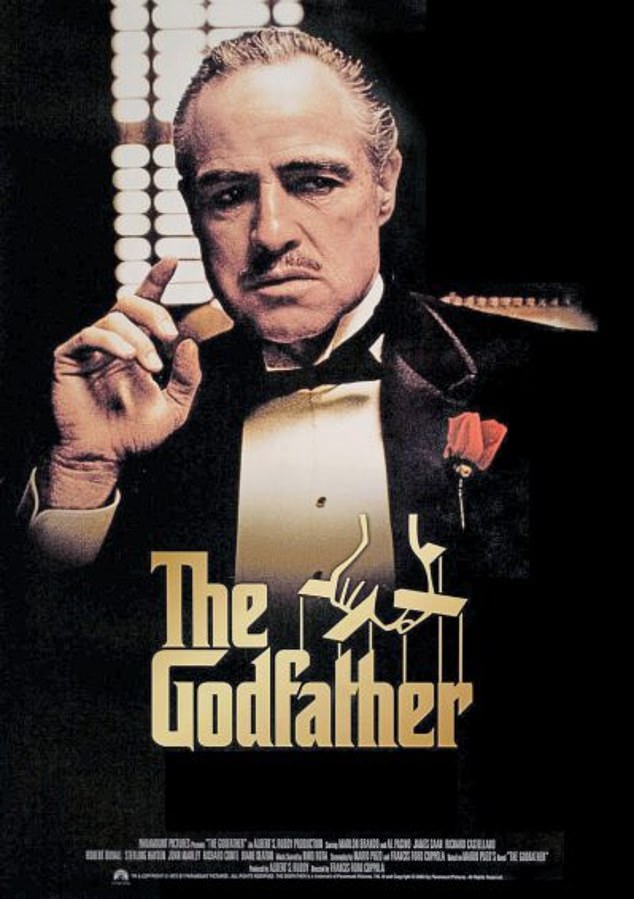 The origin story of The Godfather is just as dramatic as Puzo’s original. Pictured: Marlon Brando as Don Corleone

Delightful as a plate is Al Ruddy, for a British audience the standout performance comes from Goode, silky smooth as the urbane but unstable Evans, who is maneuvered by Ruddy into hiring Coppola (Dan Fogler, also excellent). Although not yet 30, Coppola was extremely determined.

Evans was dead on against the unknown (and admittedly rather short) Al Pacino, who played Vito’s youngest son Michael and reportedly called him “a midget” and “that little midget.” But Coppola prevailed, as he did again when studio bosses raged against plans to cast the “washy” Brando.

The director resorted to alarming theatrics, even faking an epileptic seizure, until they gave in.

The offering gets stuck in all of this, but fittingly, the production wasn’t without a headache of its own. Armie Hammer was first hired to play Ruddy but had to pull out after allegations of sexual misconduct.

A more routine challenge was finding actors for movie stars who were or would become household names. “It was incredibly scary,” says executive producer Nikki Toscano.

As studio heads raged against the plan to cast the “washy” Brando, Coppola ph faked an epileptic fit

“How can anyone compete with Marlon Brando and Al Pacino?” Indeed, Anthony Ippolito makes a very believable Pacino, and although Justin Chambers has a much more difficult job playing Brando, who plays Don Corleone (a transformation that involved boot polish rubbed into his blond hair and his cheeks stuffed with Kleenex), there is he shot him a creditable mark.

Choosing Lou Ferrigno, made famous by the ’70s TV series The Incredible Hulk, to play Lenny Montana was an easier task. The 6 foot 6 in Montana was a wrestler turned gangster.

His specialty was arson, and he ended up in prison at Rikers Island. But when Ruddy and Coppola cast The Godfather, he was a bodyguard for the Colombo family.

Picking him as the Corleones’ hulking enforcer Luca Brasi was another way to win them over. Montana himself was delighted. Although he wasn’t overly upset by this, Montana was desperately nervous at the beginning of the film about starring alongside Brando in the wedding scene.

Coppola had the brilliant idea of ​​weaving Montana’s fear into the story, hence the sequence in which he first rehearses his lines to the Don and then jumbles them up. The nervousness was real.

Montana was an extremely popular presence on set. When Ruddy’s assistant Bettye McCartt (played by Juno Temple in The Offer) broke her watch, he gave her an antique replacement set with diamonds, telling her it was “a gift from the boys.” He didn’t say how he got it, but suggested she never wear it in Florida.

So, while there may be fewer corpses, The Godfather’s origin story is just as dramatic as Puzo’s original. For fans, it ended up being “The Offer They Can’t Refuse.”