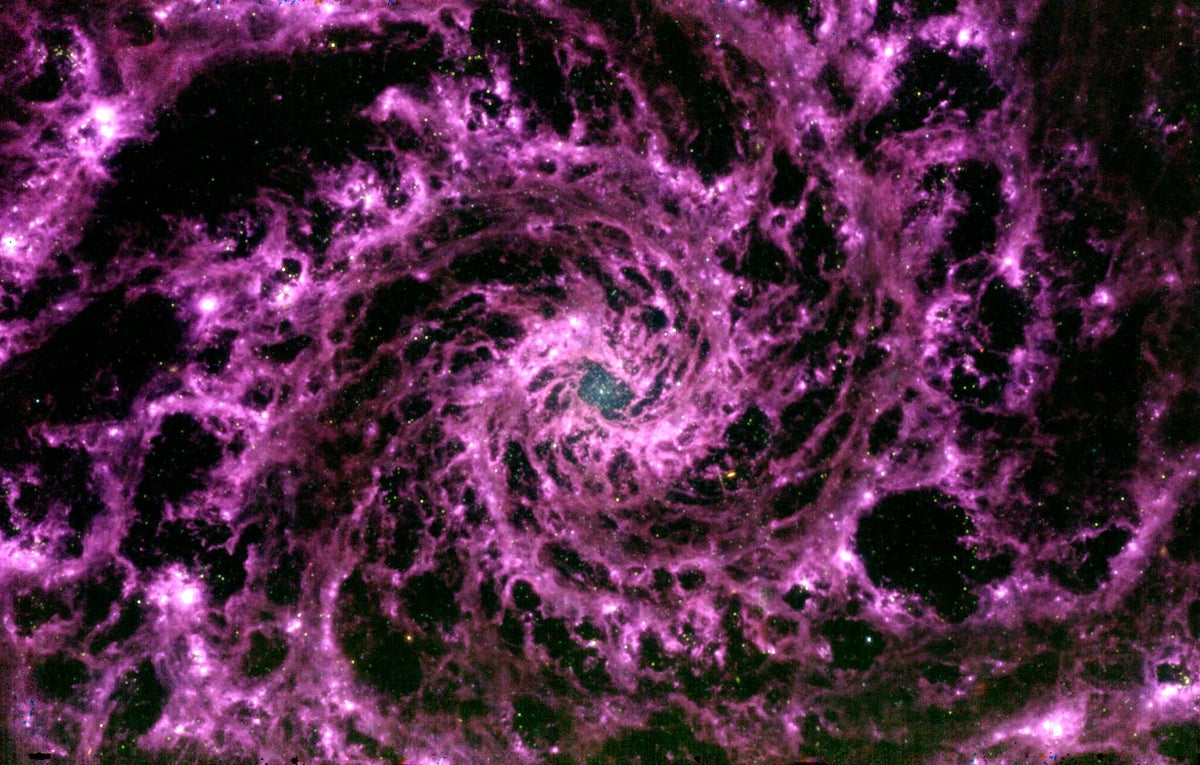 “This is a galaxy that we think looks very similar to our own Milky Way,” said Gabriel Brammer, an astronomer at the Cosmic Dawn Center of the Niels Bohr Institute at the University of Copenhagen shared the picture on Twitter Monday, told The Independent in an interview. “You can see all these knots of individual stars forming, individual supernovae going off, and really study that in detail.”

NGC 628’s spiral arms have been imaged previously, but the galaxy’s visible-light images were taken from the Hubble Space Telescope look nothing at all like the purple spiral structure seen in Webb’s mid-infrared image.

“They look at this galaxy with Hubble or with ground-based telescopes,” said Dr. Brammer, “You see blue stars, you see red stars, you see spiral arms, you see dust lanes.”

Those dust lanes, he said, reddish-brown filaments in the spiral arms tend to block stars in the visible images taken by Webb and other telescopes.

“In the mid-infrared, you actually see the opposite of that, where this dust isn’t absorbing anymore; we’re actually directly observing this dust itself, which is now glowing because the dust itself is emitting,” said Dr. brammer “We are actually seeing an image of the gas and dust in this galaxy and not the stars.”

Webb captured the image of NGC 628 on July 17 and relayed it back to Earth, where it was logged Barbara Mikulski Archive for Space Telescopes, (MAST), where the data is accessible to everyone, including the general public. dr Brammer studies very distant galaxies in his own work rather than relatively close galaxies like NGC 628, but when he saw the raw image in the data Monday morning, he knew he wanted to color-process the image and share it.

“It was really the first thing that came out,” he said. “It really blew me away when I opened it up on my screen.”

While NASA made a huge showpiece out of the unveiling of the first five full-color Webb images on July 12th, the telescope has hardly stood still since then and, according to Dr. Brammer continuously acquires images and stores them in the MAST archive. These are extremely exciting times for astronomers who have waited more than 20 years to see what Webb can do.”

“In some cases, we’ve been waiting for Webb for decades, and all of us haven’t slept much in the last week looking at as many different Webb pictures as we can,” said Dr. brammer “It’s just all really spectacular.”