On Wednesday morning, a convoy of about 100 trucks drove at a speed of 15 to 20 km/h over the West Gate Bridge in Melbourne, causing traffic chaos at 8.30 a.m. during rush hours.

“It has a big knock-on effect,” said Chris Miller of the Department of Transportation. 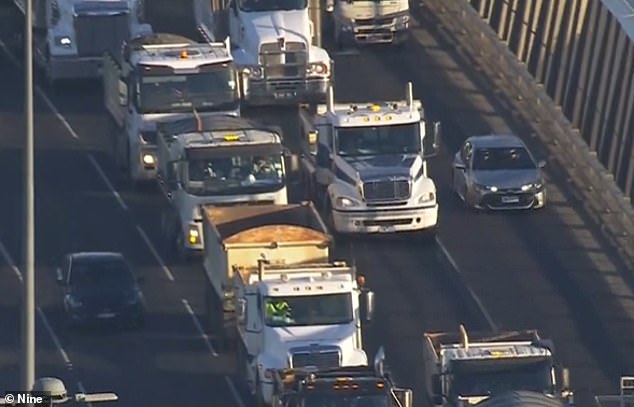 A convoy of about 100 trucks drove over the West Gate Bridge in Melbourne, causing traffic chaos at rush hour

The convoy is scheduled to drive through as far as the Victorian State Parliament and then loop around the city several times during the city’s busy morning rush.

“Our fuel is up to 50 or 60 percent of our costs, and they hung us out to dry, so we decided to go into town to show them we have to get this done,” he told 3AW.

“They fixed our tariff so we can’t get extra money back for the extra expenses.

“Most people are fortunate enough to be making about $60 a day in profit right now.”

The convoy reportedly caused traffic to back up from the bridge to Boundary Road about 15 miles (25 km) away.