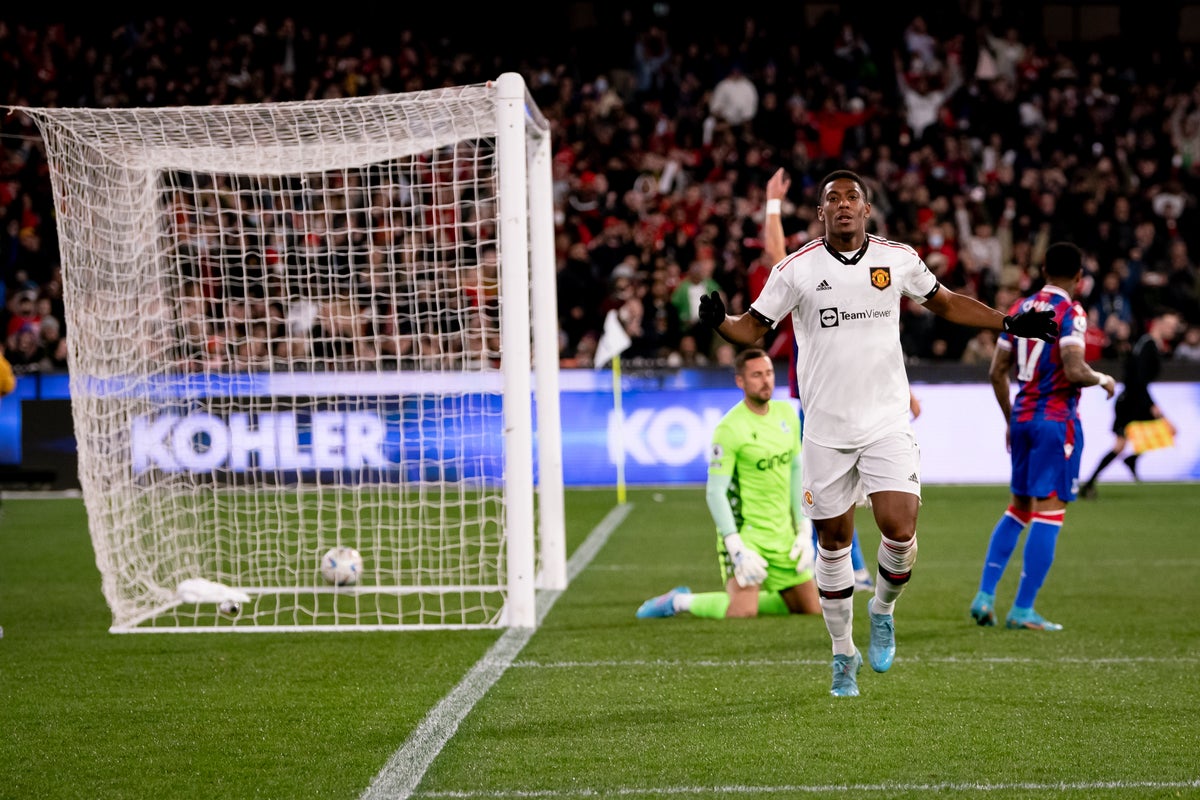 United have enjoyed their trip to Australia so far, with heavy wins over Liverpool and Melbourne Victory, as Eric ten Hag meets his new squad and despite Cristiano Ronaldo’s continued absence. And that form continued after Anthony Martial, Marcus Rashford and Jadon Sancho took the game away from Palace and gave a big confidence boost to Ten Hag’s redesigned front line.

Palace are struggling with Covid and injuries but still fielded plenty of talent, with Jean-Philippe Mateta leading the line alongside Jordan Ayew. Eighteen-year-old winger Malcolm Ebiowei also got in the starting blocks, as did 20-year-old Killian Phillips and 19-year-old Jesurun Rak-Sakyi, but couldn’t stop the Eagles from going under at the MCG goal from Joel Ward despite the consolation.

There were 76,499 in attendance at the MCG, where Maguire’s every touch during the opening stages was taunted.

Those pantomime boos drew attention away from a bright United game.

Jack Butland injured his hand while making an impressive save from Martial and substitute Palace goalkeeper Remi Matthews soon took the ball out of his net.

Tyrell Malacia looked good in his first United start and played to Diogo Dalot, who tricked in a left-footed cross for Martial in the 17th minute to control him and hit home from close range.

Malcolm Ebiowei – a player United focused on in the summer – forced De Gea to make a good save but Ten Hag’s side continued to thrive.

Manchester United captain Harry Maguire was mercilessly booed by the Melbourne crowd during the early stages of a promising friendly win over the absent Crystal Palace.

Just a week after coach Erik ten Hag confirmed the defender would retain the armband, the 29-year-old came under fire from sections of the crowd in Australia.

Maguire had avoided a negative reaction in Bangkok and United’s first friendly at the MCG but the centre-back was taunted early in Tuesday’s 3-1 win over Patrick Vieiras Palace.

The England international seemed to wow the fans with an impressive display and the boos died down in the first half as Anthony Martial scored in their third straight friendly.

The Frenchman was involved in an excellent team goal that ended Marcus Rashford early in the second half, flicking through for Jadon Sancho to complete another well-crafted move.

David De Gea will be disappointed not to have saved Joel Ward’s header and Will Fish was sent off but it was another largely positive evening for the rejuvenated United.

Once again, this was not a particularly strong opponent for Erik ten Hag’s side. Liverpool had a heavily rotated squad in the opening game, while Melbourne Victory clearly aren’t at Premier League level, which was evident in the second game of the tour.

Palace were also heavily rotated here, with nine players absent through injury or unvaccinated, meaning they were unable to travel. So it came as no surprise that United clinched another comfortable win. But the way, with some nifty goals and clean exchanges between the front players, will build some much-needed confidence. Goals for Sancho, Martial and Rashford will be a huge boost at a time when Cristiano Ronaldo appears to be looking for a way out of the club.

90 minutes: Hannibal unleashes a counterattack, but it slows as Elanga runs into a dead end.

87 minutes: This game is coming to a little end after all those changes and that red card. Laird replaces Malacia.

A night to forget for the 19-year-old centre-back:

Oh dear, the teenage defender was shown a red card for deliberately thwarting a scoring opportunity.

77 minutes: Another set of changes from Palace, and that’s their entire XI, which is now being replaced. For United, Hannibal gets a well-placed shot that goes straight to Matthews.

Palace has one back! Joel Ward brings his head to a corner and pushes the ball past De Gea.