In the dark days of World War II, a dashing young US airman serving in Britain met a pretty English girl.

It wasn’t exactly a love story, she already had a boyfriend who was a German prisoner of war.

But Louisa Fitzpatrick forged a close friendship with the dark-haired aviator with the rakish Errol Flynn mustache and spoke about him often for the rest of her life.

He gave her pictures, not just of himself, but of his three brothers, his parents, even their house in Key West, Florida.

Now, eight years after her death at the age of 92 – and 80 years after American forces arrived in Britain – Louisa’s son is desperate to find out who the man was who meant so much to his mother. 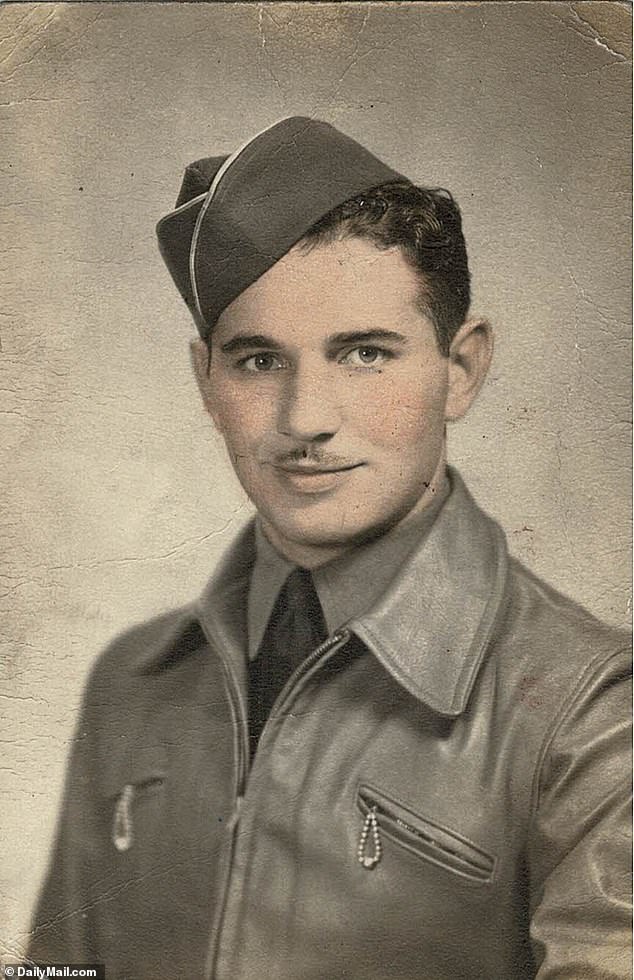 British-born Louisa Fitzpatrick met a dashing young US airman serving in Britain during World War II. The man’s name is believed to be Philip Tupino or Toppino 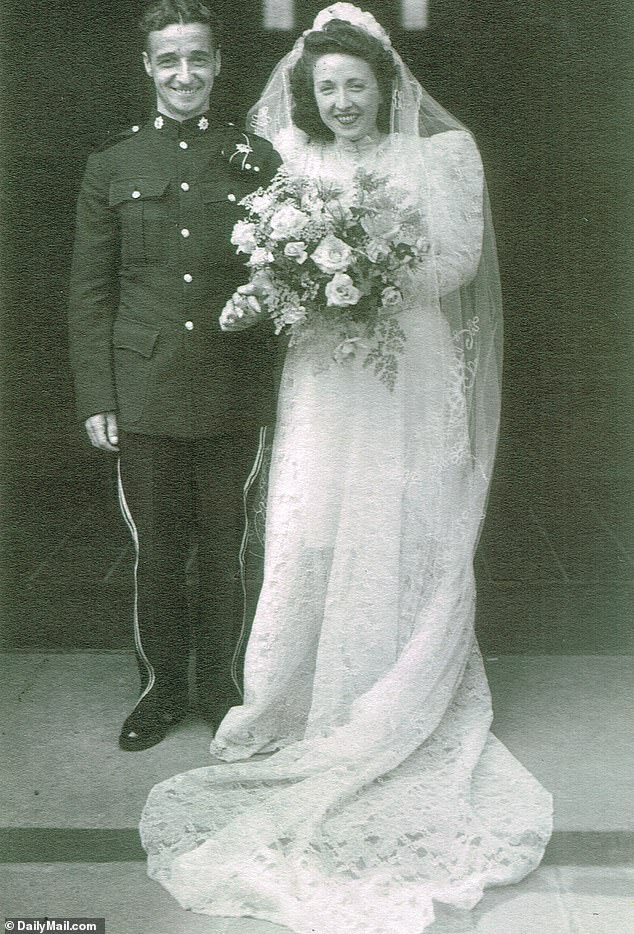 Fitzpatrick formed a close friendship with the dark haired aviator and she spoke about him for the rest of her life. She married Harry Davies in 1945 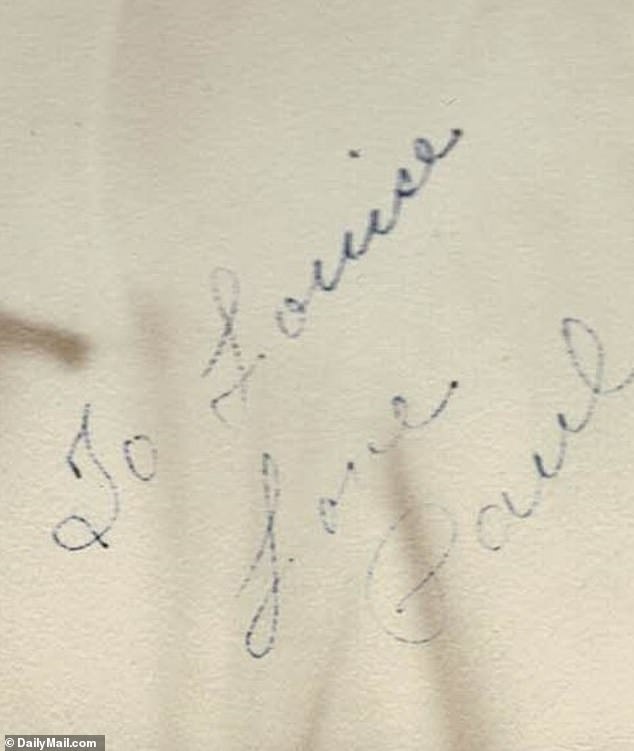 The mystery man’s brothers wrote Louisa notes. One read: “To Louise Love Paul”. Although her name was Louisa, she often went with Louise

He also wants to return the paintings to his family.

“My mother lived with me for three years before she moved into a home,” said fashion journalist Eric Musgrave, 67. “So when she died I kept her. 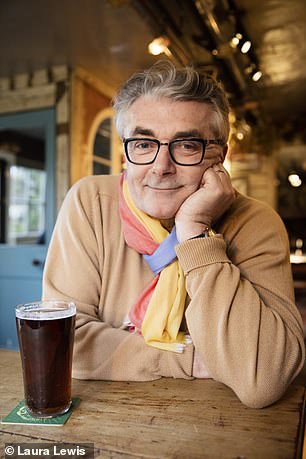 Fashion journalist Eric Musgrave, 67, is desperate to find out who the man was who meant so much to his mother

“But I’m at the point now where I want to clean up my life and my kids aren’t interested in these paintings, they would just throw them away, so I’d love to give them back to someone who could appreciate them.”

Musgrave recalls his fascination with the images of his mother as a child, particularly the Florida home, so different from the council housing in a northern English town where he grew up.

“It was a big white house,” he said. “I used to joke with her, ‘Why didn’t you marry him? Then, instead of growing up on a council estate in Leeds, we could have lived in Florida by the sea.”

“As a kid in the 1960s, I would look at this big white house, which to me was like something out of a Hollywood movie,” recalls Musgrave, who traveled extensively across the States but never made it to the Sunshine State .

“The brothers wrote their names on their photos. “One says To Louise, love Paul”, the other says “To Louise from Frank and George”. Although her name was Louisa, she often went with Louise.

“It just goes to show how close they must have been that he gave her pictures of his family and he must have told his brothers in the States about her.

“Annoyingly, there is no name on the pictures of the plane itself.”

Musgrave is pretty sure the two were just friends. “I have no indication they were ever romantically involved.” He believes she remained loyal to her boyfriend Harry Davies, who was imprisoned in Stalag XX-B in German-occupied Poland after his capture in Dunkirk.

“But he was obviously very keen on my mother. The pictures he gave her were expensive studio portraits.”

Musgrave believes the man’s name may have been Philip. As far as he can remember from his mother telling him his surname was Tupino or Toppino. 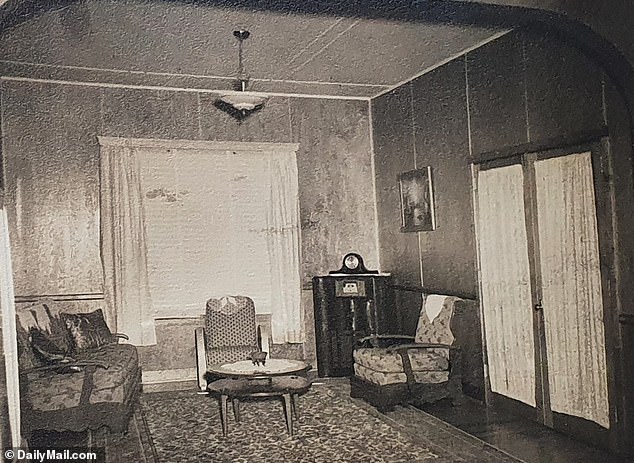 The mystery man gave Louisa pictures, not just of himself, but of his three brothers, his parents, even their home in Key West, Florida 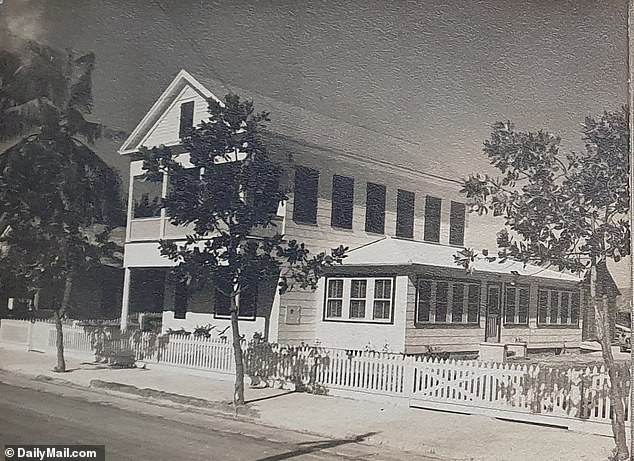 “As a kid in the 1960s, I would look at this big white house, which to me was like something out of a Hollywood movie,” recalls Musgrave, who has traveled extensively throughout the United States but never made it to Florida 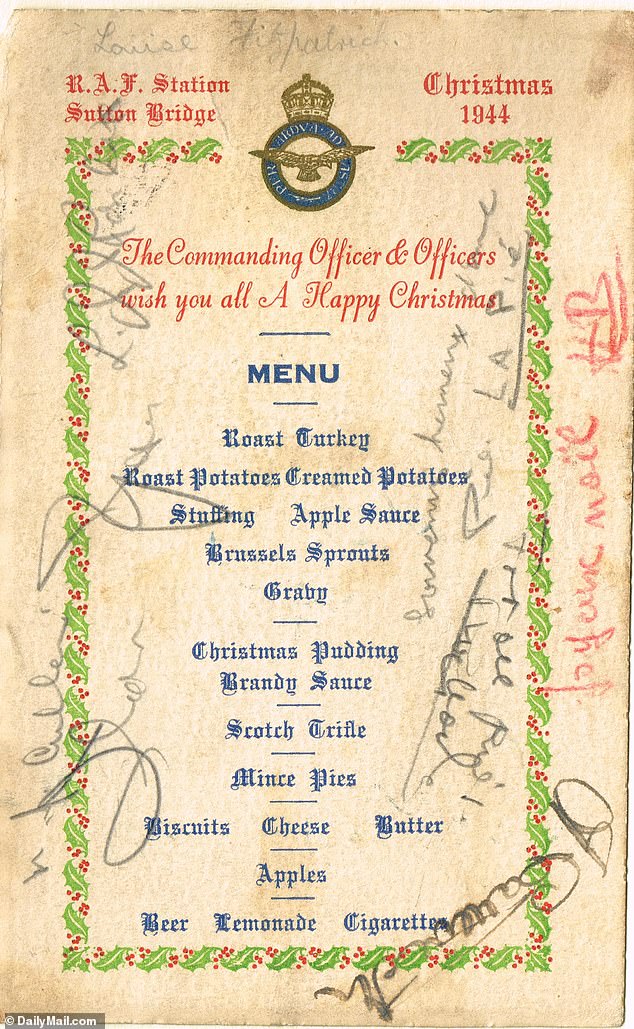 “I wish I’d pushed her more when she was alive, but her memory wasn’t always the best.

“I don’t even know where I got the name Tupino from, but it was in the back of my mind somewhere.” 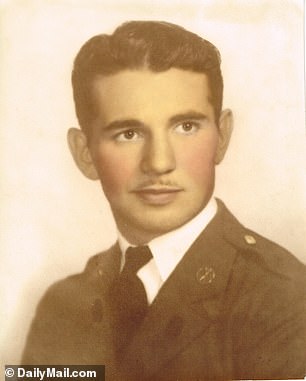 He knows the mysterious aviator was affiliated with the Eighth Air Force and believes it was based in eastern England. Louisa, who joined the Women’s Auxiliary Air Force when the war broke out, was stationed nearby.

One of the memorabilia was a menu from a 1944 Christmas dinner at RAF Sutton Bridge in Lincolnshire.

“I’m not exactly sure where she was stationed, but she must have been at that dinner.” The menu showed little wartime privation, boasting roast turkey, roast and creamed potatoes, stuffing, applesauce, Brussels sprouts and gravy, followed by Christmas pudding and brandy sauce.

“She claimed they would air her once a year to prove it was important work and what would go wrong if they didn’t check enough.

“But I’m not sure if that’s true. My mother had a vivid imagination.”

Some images in the collection show crooner Bing Crosby entertaining troops in an airplane hangar as part of a four-month tour he undertook in 1944.

“I grew up hearing all these stories about the war,” said Musgrave, who now lives near Berwick-on-Tweed on the English side of the Scottish border.

“I was born in 1955, long after the conflict ended and thousands of so-called Yanks had returned home,” Musgrave said, “but I grew up hearing a lot of stories about what a great time my mother had during our time, I usually think.” in the dark days of war.

“We always think of the war as such a somber time in England but she said she just dealt with it and I look at these pictures and it seems like they enjoyed shaking hands with friends.” 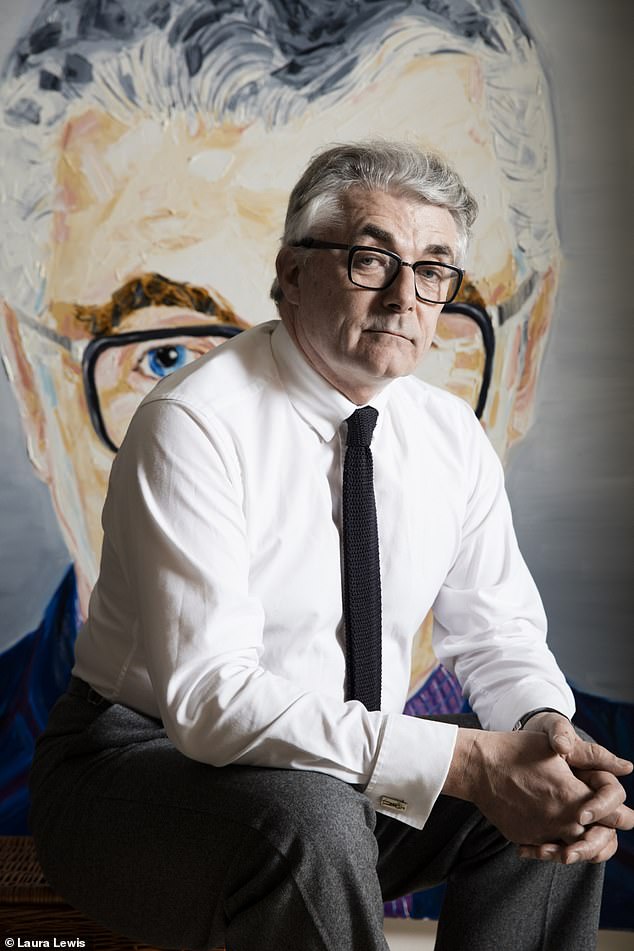 “I hope someone recognizes the people in the photos or even the house,” Musgrave said. “It’s very far-fetched, but it could be that one of the brothers is still alive. I would like to send these photos home 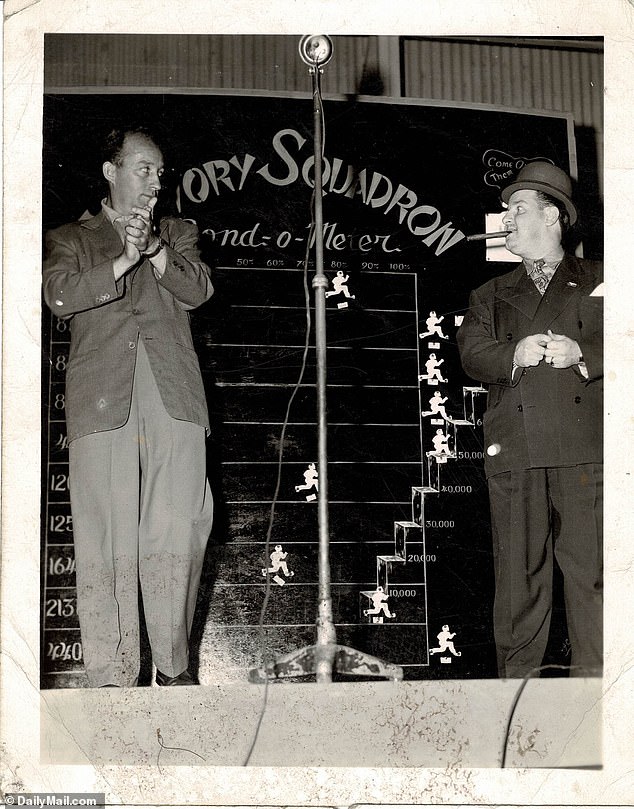 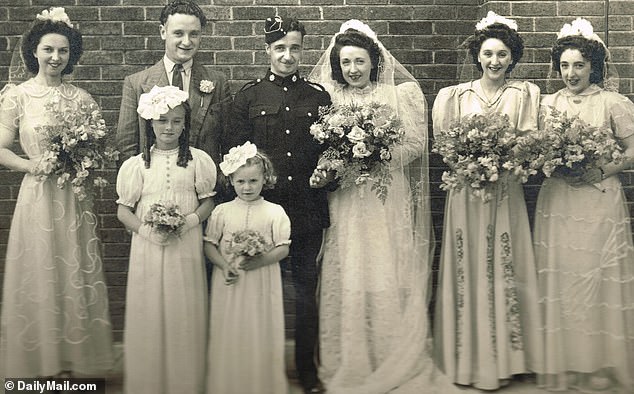 After the end of the war, Louisa lost contact with her American friend. Harry Davies was freed and they married in the fall of 1945 and had two daughters

Musgrave said his mother always has fond memories of her time with the WAAF. He took her to watch the 1990 film Memphis Belle about the 8th Army and their flying fortress plane, and she made holes in his accuracy.

After the end of the war, Louisa lost contact with her American friend. Harry Davies was freed and they married in the fall of 1945 and had two daughters.

But Davies’ years in German captivity took a heavy toll on his health and he died in the early 1950s. She married Eric Musgrave Sr., who died in 1995.

“My mother was a remarkable woman who had a remarkable life,” Musgrave said. “She had a real zest for life and always had a lot of friends.

“During the war she had many American friends. I want to honor her memory and the memory of thousands of young aviators who didn’t make it home by returning these beautiful photos to her friend’s family.

“I hope someone recognizes the people in the photos or even the house. It’s a very long shot, but one of the brothers might still be alive. I would like to send these photos home.”