Japanese firms have found an ingenious solution to the country’s exhausted office workers’ problem by installing “sleeping boxes” in offices so they can sleep on their feet.

The vertical sleeping device supports the user’s head, knees and buttocks to stay upright and avoid falling over.

The program aims to counteract the country’s harsh office culture — with one in four employees losing up to 80 hours a month on overtime — often unpaid.

Workplace drowsiness is so prevalent in Japanthe country has the term “inemuri” to refer to those who doze off at work. 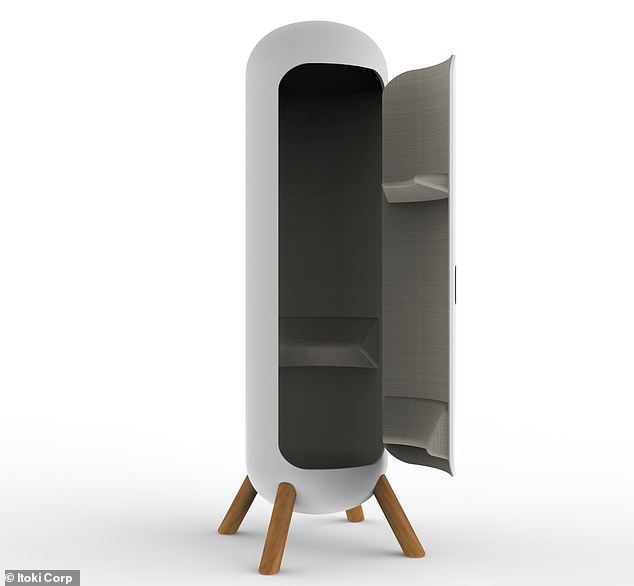 The vertical sleeping device supports the user’s head, knees and buttocks to stay upright and avoid falling over

Saeko Kawashima, Itoki’s communications director, told the media she is confident the novel sleeping box will help people who need to take naps during the day.

“In Japan, there are many people who lock themselves in the bathroom for a while, which I don’t think is healthy,” she said said Bloomberg News.

“It’s better to sleep in a comfortable place.

“Many Japanese people tend to work nonstop without a break,” Kawashima said.

“We hope companies can use this as a more flexible approach to resting.”

Japan is notorious for demanding extremely long hours from its employees.

According to a 2016 government study, one in four companies requires employees to work up to 80 hours of overtime every month – usually unpaid.

The sleeping boxes drew mixed reactions on social media when news of them broke.

Frederick von Briel tweeted, “Really excited to see if upright nap boxes actually take off in Japan or if it becomes one of those well intentioned ideas nobody needs.”

Aaron Buley posted ‘uhhh yikes’ while Coyote Country 99.5 added: ‘I love naps but not standing up!’