The high-class sex workers were caught on camera alongside the bald, middle-aged men seated at Hurstville/Georges River Council in the Southwest Sydneyin a shabby honey trap.

The young women in short and tight dresses, hand in hand, lead away former mayor Vincenzo Badalati and city councilor Philip Sansom and eat together.

Now Mr Badalati has admitted the shady video was taken as part of an extortion conspiracy that is now being targeted NSW‘s Independent Commission Against Corruption. 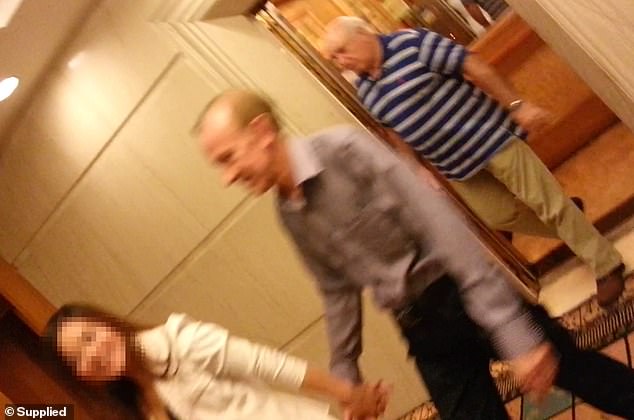 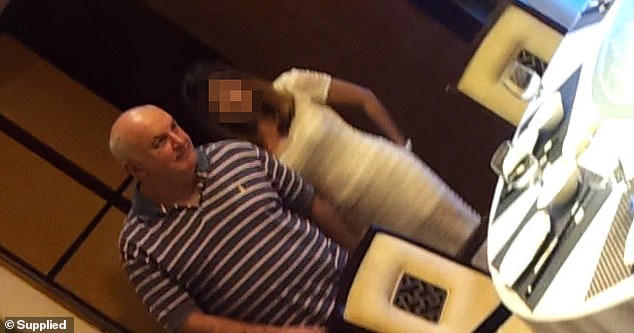 The high-class sex workers were filmed on camera as they snuggled up to the bald, middle-aged men before being seen leading them away hand in hand 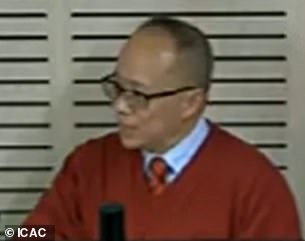 Clifton Wong, 62, was found dead in his office after making a statement about alleged corruption at Hurstville Council in Sydney

The inquiry was rocked earlier this month by the apparent suicide of one of the council members called to testify.

Clifton Wong, 62, was found dead in his Sydney office on July 6, eight days after he told the inquest he had failed to report a developer who allegedly paid $10,000 to former Deputy Mayor Hindi had slipped.

Real estate developer Ching Wah Uy, known as Phillip Uy, was behind plans to build the $128 million Landmark One hotel, retail and residential complex and a $44 million 75-apartment high-rise in Hurstville.

The inquiry had previously heard the developer would regularly fly councilors to China for “boys’ weekends”, with Mr Uy often picking up the bill.

But he secretly filmed the councilors’ videos with the escorts and paid them off as part of a blackmail scheme, Mr Badalati told the inquiry. 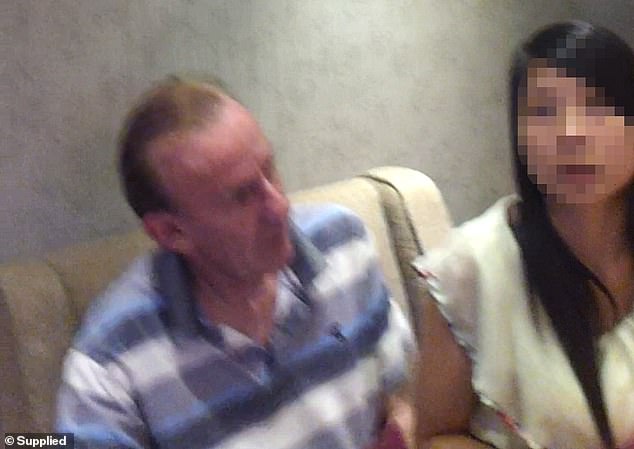 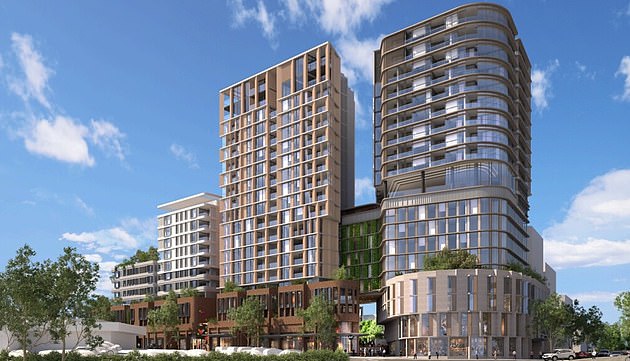 Real estate developer Ching Wah Uy, known as Phillip Uy, was behind plans to build the $128 million Landmark One hotel, retail and residential complex (pictured) and a $29 million 75-apartment high-rise in Hurstville

Explosive video footage was shown Tuesday of Sansom and Badalati having dinner with companions and the pair walking away hand in hand.

The developer is briefly seen in a reflection pretending to be on the phone on his phone while secretly recording the councilors with the young women.

The former Hurstville mayor admitted the woman he was filmed with on camera was an escort, but he had not paid for her services and believed Mr Uy had.

“Having seen this video and the other, I believe it was a blackmail tool,” he told ICAC after being confronted with clips from March 2013 and again from July 2013. 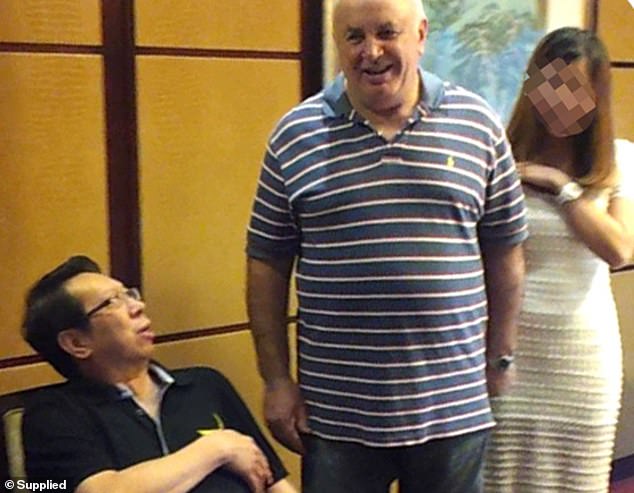 Ex-Mayor Vincenzo Badalati (centre) admitted the woman he was filmed with on camera was an escort, but he had not paid for her services and believed developer Phillip Uy (left) had 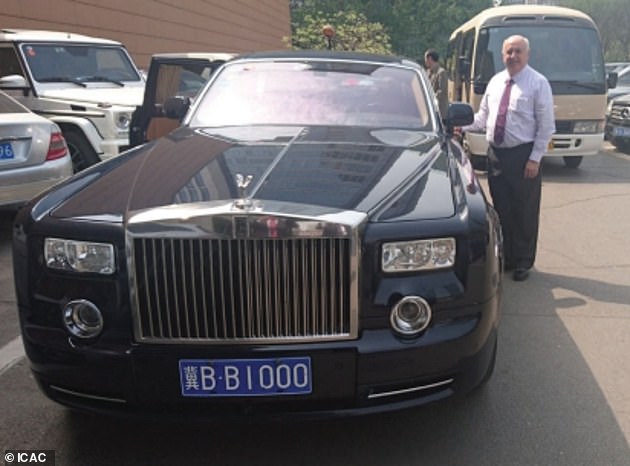 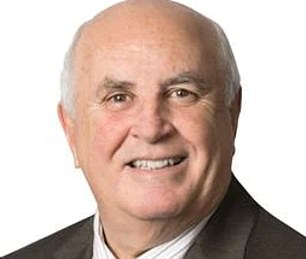 He said he believes the footage was shot to be used against him and forcing him to support planning approval for Mr Uy’s developments.

“If that had been shown to your family at the time, would you have been very embarrassed?” Counsel Assisting the Commission Zelie Heger asked him.

He said it had been, but admitted Mr Uy had not used it to blackmail him and he had only seen the footage for the first time at the inquest.

On Monday, the ICAC inquiry heard that Mr Uy and Councilor Sansom had also teamed up with escorts on several trips to China in 2014 and 2015.

Receipts presented to the inquiry showed Mr Uy had spent thousands on flights and hotel accommodation for Mr Sansom, who claimed he had repaid some airfare.

When Ms Heger said it was a “significant conflict of interest”, he admitted he should have declared that he had a “non-financial interest”. 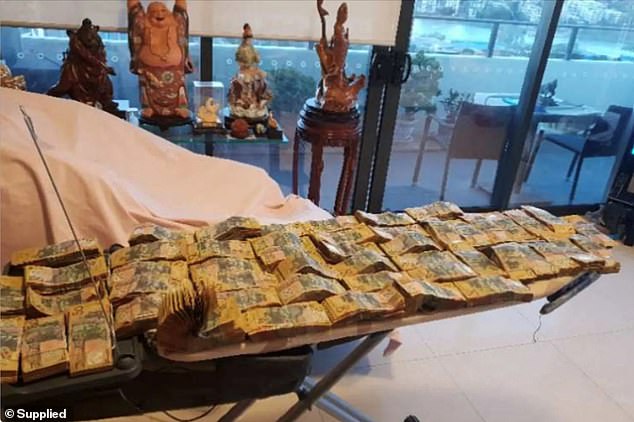 Phillip Uy admitted taking a photo of around $300,000 in cash on an ironing board at his Rhodes flat in Sydney

Mr Badalati has previously admitted accepting an alleged $170,000 bribe from Mr Uy for supporting planning approval for his two developments in 2016 despite opposition from council staff. 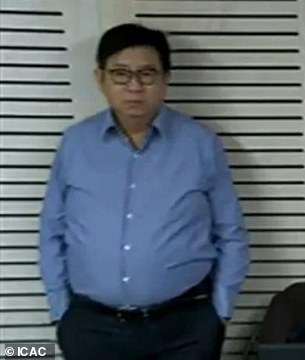 ‘[Mr Uy] opened his trunk and gave us two bags each [and said] “Thank you for your support at Landmark,” Mr. Badalati told the inquiry in June.

Mr Uy denies giving the bribes but admitted taking a photograph of around $300,000 in cash on an ironing board at his Rhodes flat in Sydney.

He said he withdrew the money to take back to Hong Kong.

JUNE 2015 – Proposal for the Landmark One hotel and retail complex comprising 375 apartments and 200 rooms at Forest Road, Hurstville

MAY 12, 2016 – Hurstville Council is dissolved and later merged with Kogarah Council and renamed Georges River Council

SEPTEMBER 2017 – Mr. Badalati and Mr. Hindi are re-elected to the new Council. Mr. Sansom is not.

DECEMBER 2021 – Mr. Badalati and Mr. Hindi are not standing for re-election