Huw Edwards told Lord Austin to rest in a Twitter spat after he blasted the BBC for “exaggerating the weather”.

The veteran broadcaster took to Twitter to share the news work Peer that News at Ten viewers are “far more trained.” climate change and the extreme temperatures’ as the Tory Leadership race on Monday evening.

Lord Austin wrote: “BBC News at 10 is slightly exaggerating the weather. The first 23 minutes were dedicated to the heat before we turned to the trivial and unimportant question of who might end up ruling the country!’

Edwards quipped back, “Oh, let it go. They still have 4 candidates and we are 7 weeks away from a result. Meanwhile, viewers tell us they’re MUCH more stressed out by climate change and extreme weather. Imagine that.’

It comes as temperatures hit an unprecedented 40.2C (104.4F) at 12.50pm this afternoon at London Heathrow Airport – causing wildfires to erupt in southern England today. 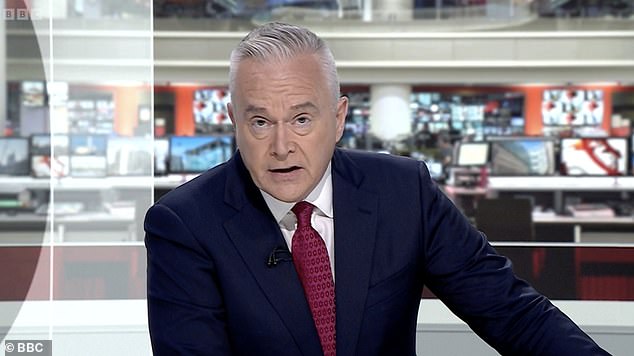 Huw Edwards told Lord Austin to “rest” in a Twitter spat after blasting the BBC for “exaggerating the weather”. 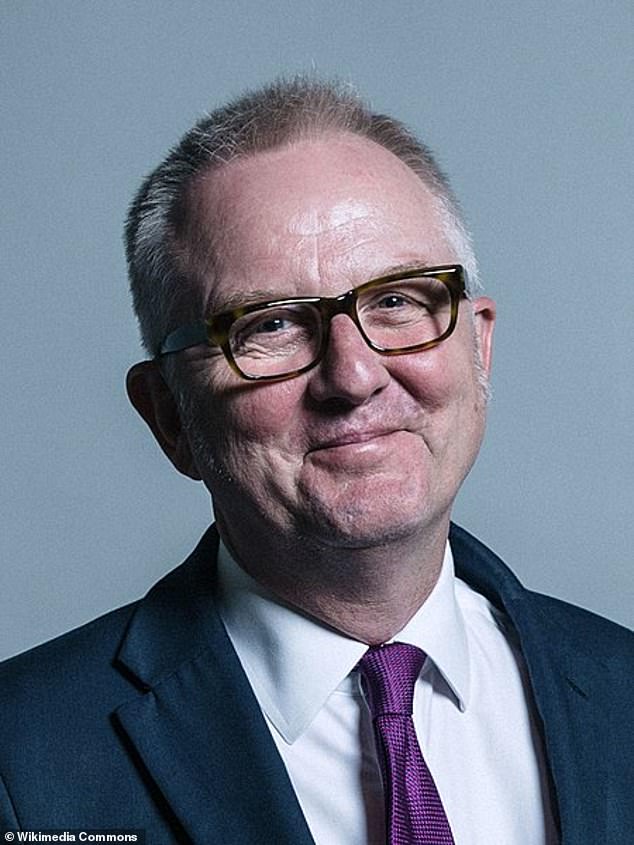 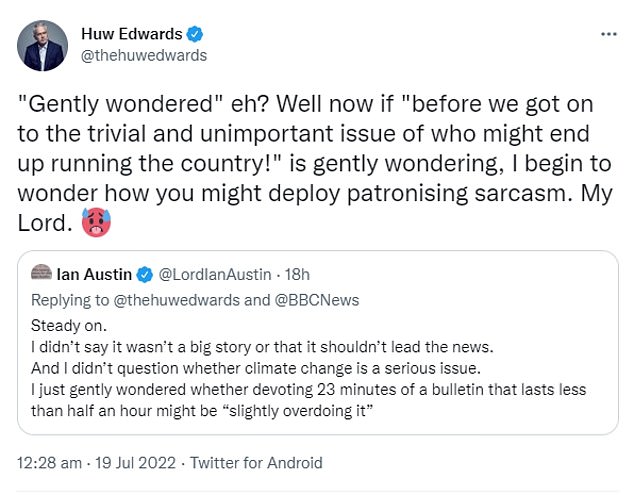 Lord Austin replied, “Hold on tight. I didn’t say it wasn’t a big story or that it shouldn’t make the news. And I didn’t question whether climate change is a serious problem.

“I was just cautiously wondering if dedicating 23 minutes to a bulletin that lasts less than half an hour might be a bit excessive.

“But what is interesting is how the BBC (an institution I have defended countless times in Parliament) reacts to even the slightest criticism or question.”

Edwards added, “Asking cautiously,” wasn’t it? Well, if “before we get to the trivial and unimportant question of who might end up ruling the country!” asks gently, I begin to wonder how you might use condescending sarcasm. Sir.’

What is interesting, however, is how the BBC (an institution I have defended countless times in Parliament) reacts to even the slightest criticism or question.

Meanwhile, firefighters have described the flames tearing through homes and buildings in London as “absolute hell” – with residents evacuated after at least five houses were destroyed, two people were taken to hospital for smoke inhalation and 1,600 calls for help were made.

Elsewhere in the country, hundreds of firefighters are battling raging infernos in Wales, Scotland and the rest of England as dry conditions in Britain fueled wildfires that threatened homes, animals and people. 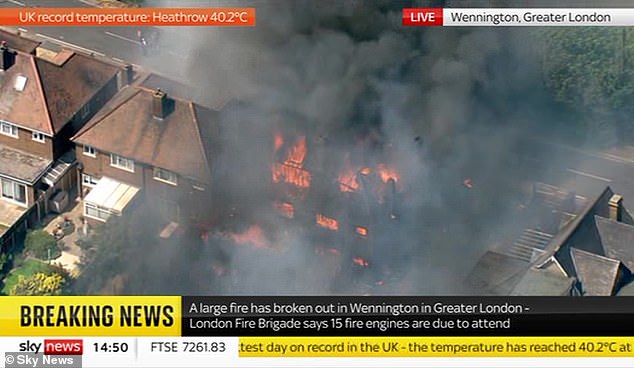 A huge grass fire broke out in Wennington, east London this afternoon and appeared to destroy this house (centre). 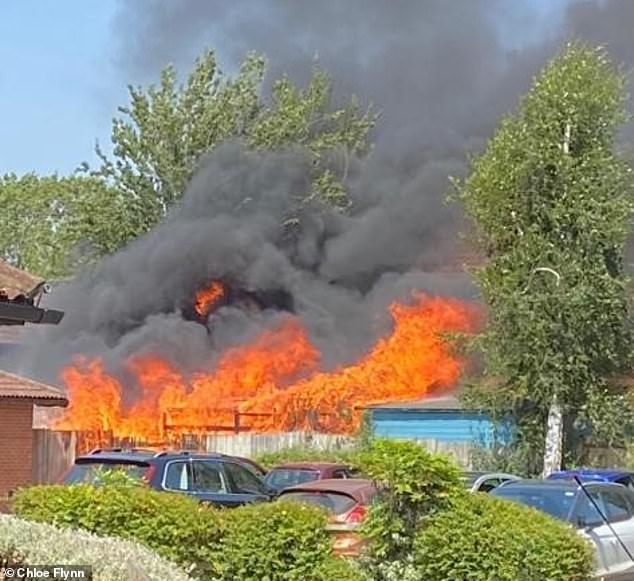 London, Hertfordshire and Leicestershire fire services were explaining major incidents as they were hit by tens of thousands of calls, meaning automatic fire alarms are getting no response and people are being asked to refrain from calling unless it’s an emergency .

Scotland also recorded its hottest day on record as temperatures climbed to 34.8C (94.64C). in Charterhall and Wales could surpass its new record of 37.1C in Hawarden, Flintshire, set yesterday.

The extreme heat was caused by a plume of hot air from North Africa and the Sahara and a subtropical pressure system known as the “Azores High” creeping further north than usual – which experts say is a result of climate change. 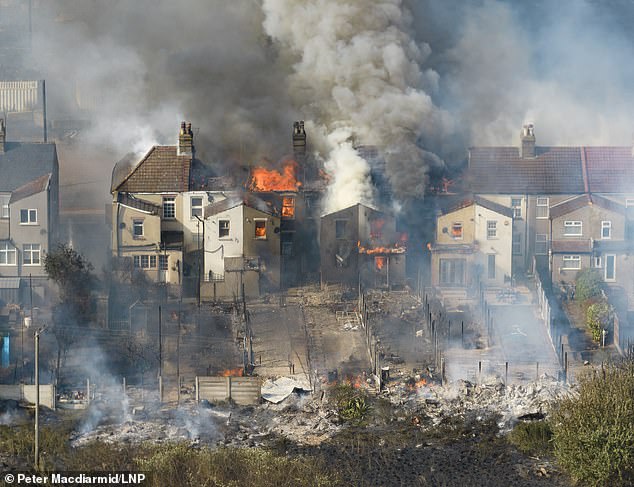 A row of houses burns in the village of Wennington, east London this afternoon as temperatures rise again today 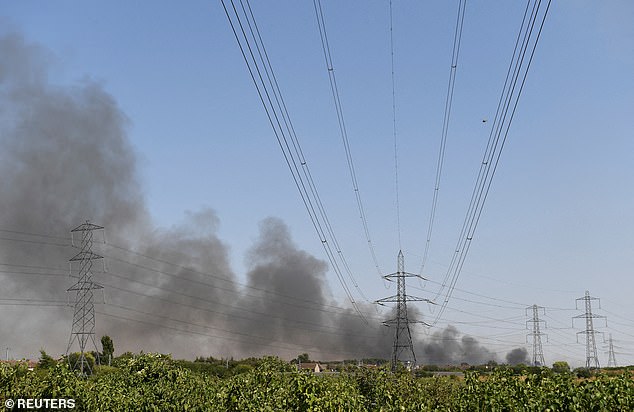 Forecasters said an absolute maximum of 43C (109F) is possible later – and the highs in England today equate to the warmest places in all of Europe. The UK is also hotter than Jamaica, the Maldives and Barbados.

The “extreme heat” also left nearly 15,000 homes in the North East without power around 2pm as electrical equipment overheated during record temperatures.

Roads were also closed as fires broke out on the major motorways, including the M25 and M1, today due to wildfires and vehicle fires. 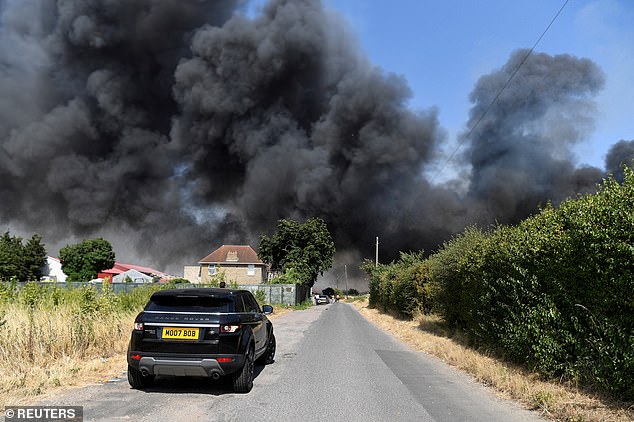 Around 100 firefighters are battling a blaze in the village of Wennington, east London today as the heatwave continues

Britain is also being warned these temperatures could soon be the “new normal” as Britain sees wildfires, extreme heat and pressure on water supplies that have long plagued Europe.