Ivana Trump has been with a slew of wealthy men since her relationship with the future president came to a tumultuous end in the mid-1990s.

Over the years, the Czech model’s cadre of men have included ski instructors, nobility and actors, not to mention the famous real estate tycoon and future president.

She has been married a total of four times – once before she met Trump and twice afterwards, though those relationships lasted only a few years.

Born Ivana Zelníčková in February 1949, she grew up in Soviet-era Czechoslovakia. But her father encouraged her to learn how to ski, and as a member of a junior ski team, she was able to see life outside of communism.

By 1971, at the age of 22, she married Alfred Winklmayr, an Austrian ski instructor whom she considered to be a platonic friend for the sole purpose of escaping communism without defecting so that she could continue to visit her parents.

Almost immediately after she got her Austrian passport in March 1972, though, she got an absentee divorce from Winklmayr in Los Angeles, California, where he had moved to teach skiing.

She then went on to enjoy a romance with a ski instructor and boutique owner while living in Montreal before she relocated to Manhattan.

It was here that she first met Donald Trump as a model in 1976, recounting in her memoir how Trump secured her and her friends a table at a hot Manhattan restaurant, paid the check and chauffeured her back to her hotel in a Cadillac.

‘My instincts told me that Donald was smart and funny – an all-American good guy,’ she wrote in her 2017 memoir ‘Raising Trump.’

She has since said she considers herself the ‘first first lady,’ having married Trump prior to his now-wife Melania, despite their tumultuous relationship and expensive divorce. 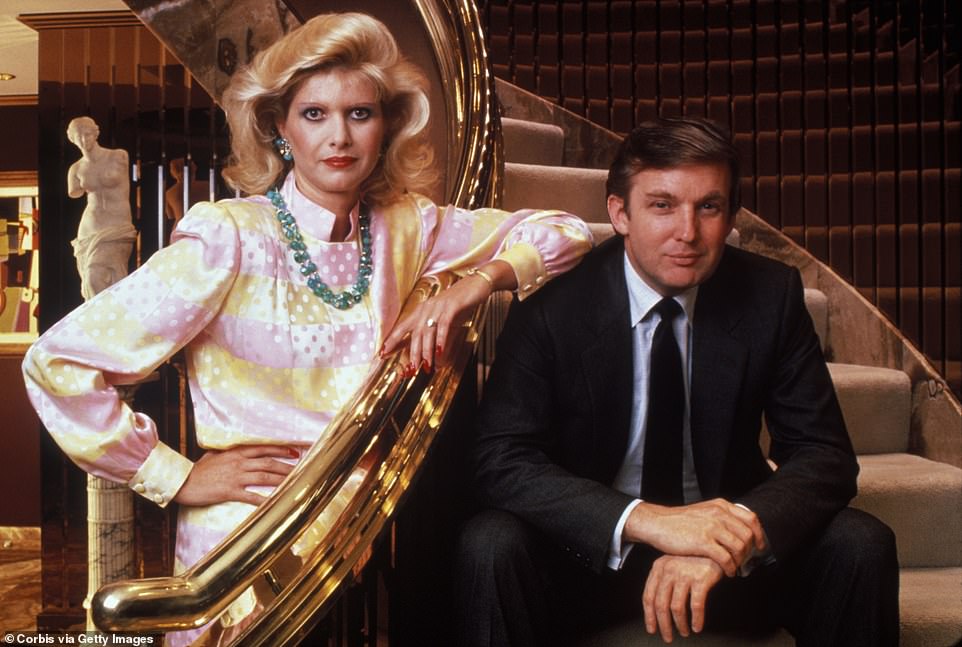 Ivana first met real estate tycoon Donald Trump in 1976 when she was working as a model, and the two were married just over a year later on April 7, 1977 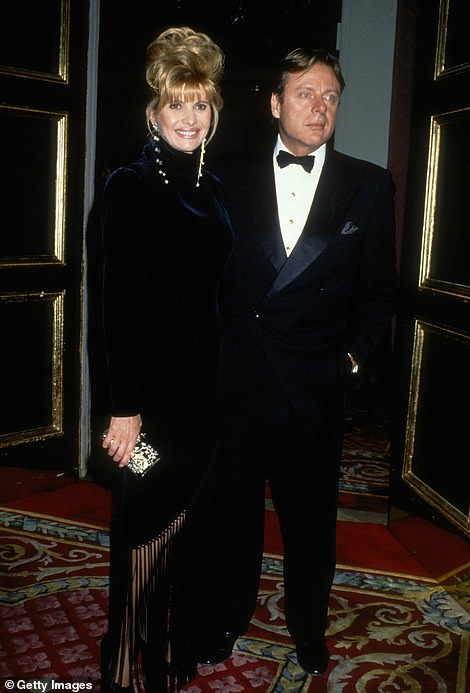 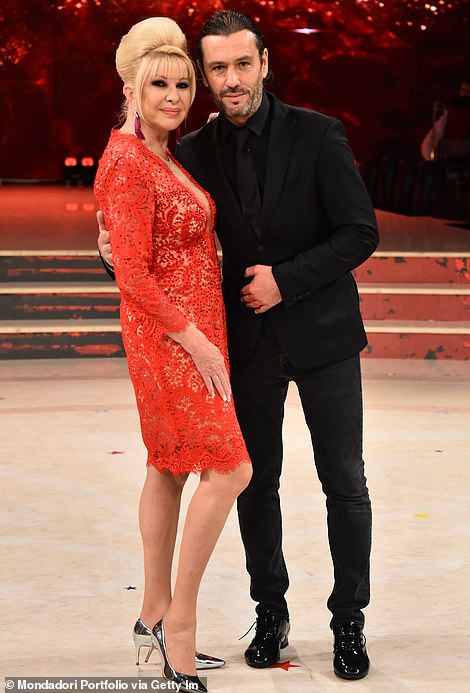 Following their divorce in the mid-1990s, Ivana went on to marry Italian entrepreneur Riccardo Mazzucchelli in November 1995 and actor Rossano Rubicondi in 2008

Ivana’s relationship with Donald seemed to begin well, with the two marrying just over a year after they met – on April 7, 1977 in a private wedding officiated by author Norman Vincent Peale.

Just a couple months later, in October 1977, the couple welcomed their first child, Donald Jr. They then went on to have Ivanka Trump in October 1981 and Eric Trump in January 1984.

At the height of their relationship, the two were business partners, working on some major projects like development of  Trump Tower on Fifth Avenue in Manhattan, the renovation of the Grand Hyatt Hotel in New York City and the construction of the Trump Taj Mahal Casino in Atlantic City, New Jersey.

But by 1989, there started to be some trouble in paradise for the couple – as they were observed fighting while on vacation in Aspen, Colorado after Ivana discovered that Donald was having an affair with Marla Maples – who would go on to be his second wife.

The Chicago Tribune then reported in February 1990 that Donald had locked his wife out of her office at the Plaza Hotel, and soon legal battles ensued over the legitimacy of their four prenuptial agreements.

They were then divorced in December 1990, under the condition that Ivana had to sign a non-disclosure agreement.

The New York Times reported in 1991 that the divorce settlement included $14 million, a 45-room Connecticut mansion, an apartment at Trump Plaza and the use of Mar-a-Lago for one month a year.

Ultimately, the divorce was finalized in 1992.

After that, Ivana became a celebrity in her own right, going on to star with Trump in a Pizza Hut commercial in 1995 in which she joked that she’s ‘only entitled to a half’ a slice, and appearing as herself in the 1996 movie ‘The First Wives Club,’ with Bette Midler, Diane Keaton and Goldie Hawn.

She tells the women in a short cameo: ‘Ladies, you have to be strong and independent.

‘And remember, don’t get mad, get everything.’ 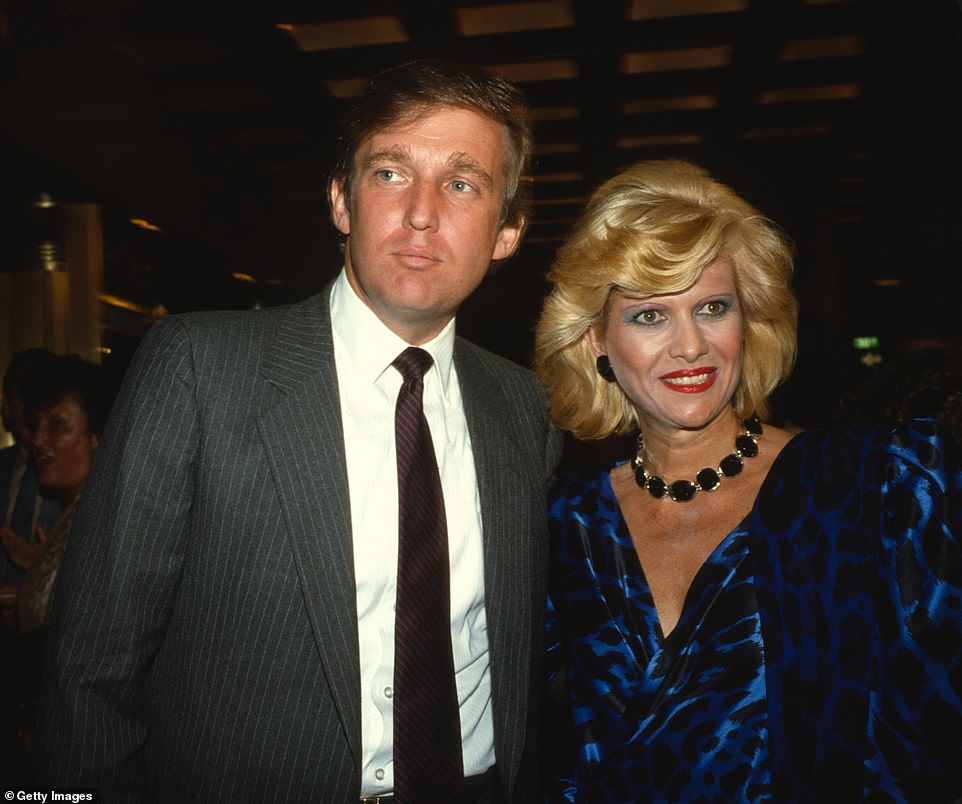 Ivana’s relationship with Donald Trump ended in havoc in 1990 after the future president cheated on her with Marla Maples, who would go on to be his second wife. Ivana, though, would get $14 million in the divorce settlement. She is pictured here with Donald Trump in September 1984

From there, she married Italian entrepreneur and international businessman Riccardo Mazzuchelli in November 1995, but the two divorced in 1997.

He had apparently wooed the newly-single ex-model with jewelry, according to People, as he drove a Rolls-Royce and owned a pricey townhouse in London while also keeping an apartment in Manhattan.

Following their divorce, Ivana, then 48, sued the 54-year-old entrepreneur for $15 million, alleging he breached the confidentiality clause in their prenuptial agreement, while he countersued her and Trump in a British court for libel.

That suit ended with an undisclosed settlement.

The two met in Monte Carlo and enjoyed a whirlwind first few years together, with Lovatelli telling the New York Times in 1998 that he whisked her away to the Ferrari factory in Italy, where she drove an F1.

‘She controlled the car very fast,’ he said. ‘All the test drivers were very impressed. And the way she skis – I have never seen a woman go down a hill like that.’

The two stayed together for years, but were never actually married. 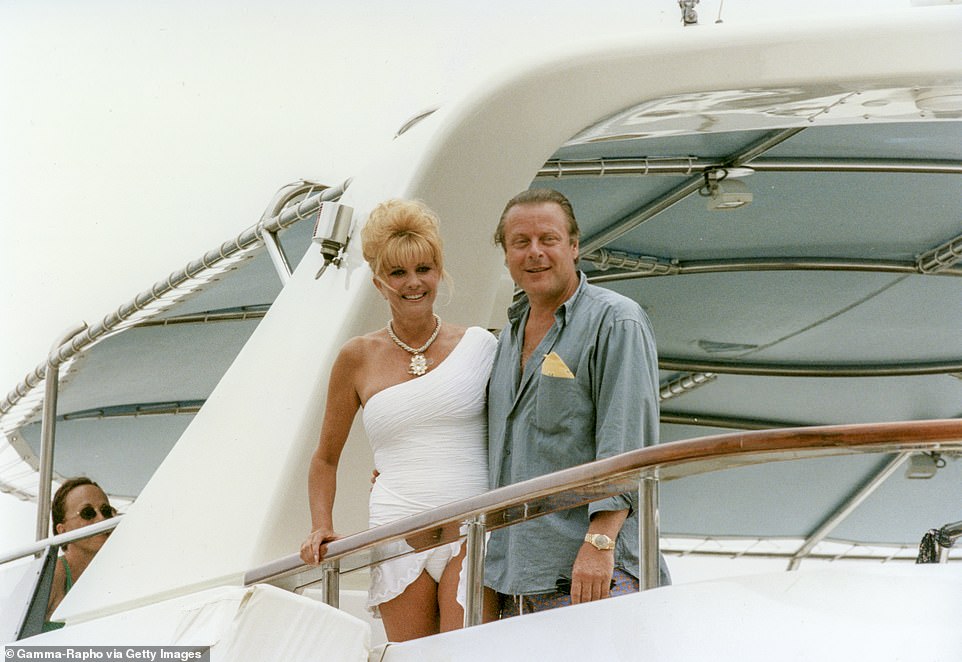 International businessman Riccardo Mazzucchelli was able to woo the newly-single Ivana Trump with his expensive belongings, as he drove a Rolls Royce and owned a pricey townhouse in London while also keeping an apartment in Manhattan 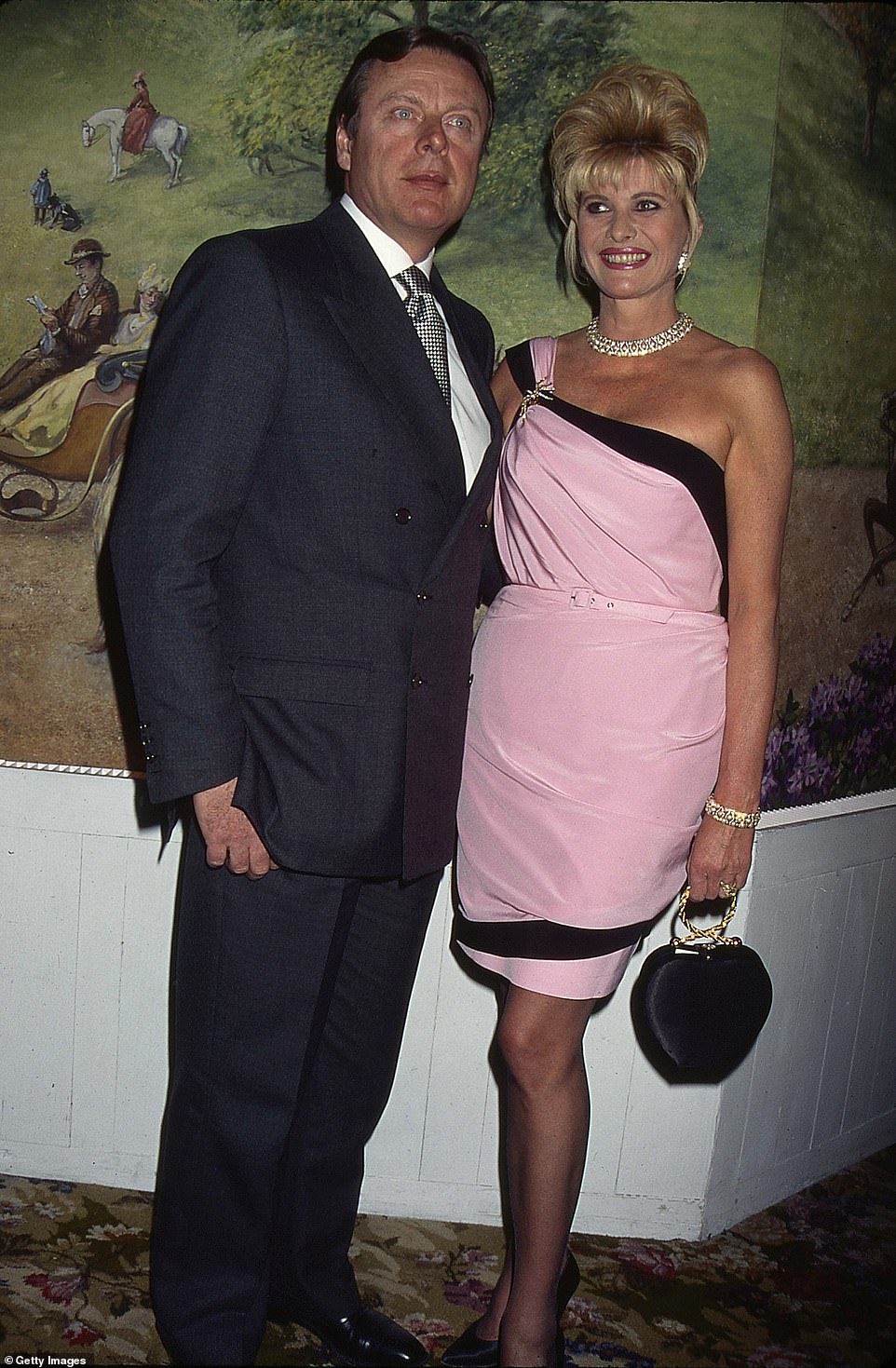 Their relationship, though, only lasted two years and ended in another tumultuous divorce as she sued him for $15 million for allegedly breaching the confidentiality clause in their prenuptial agreement, while he countersued her and Trump in a British court for libel 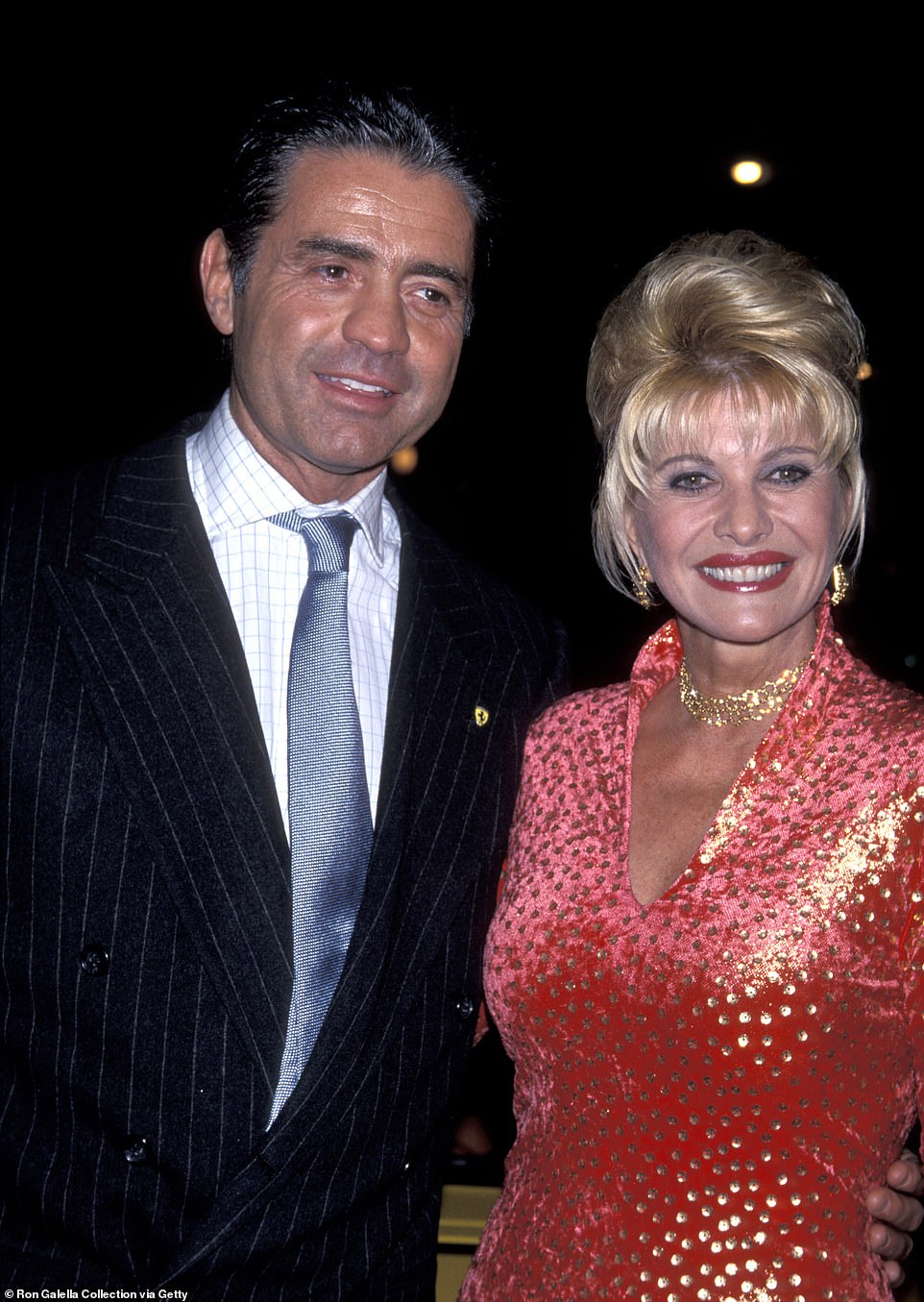 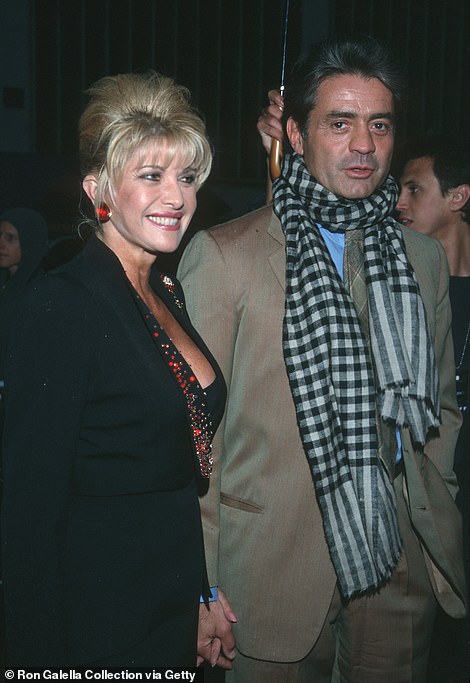 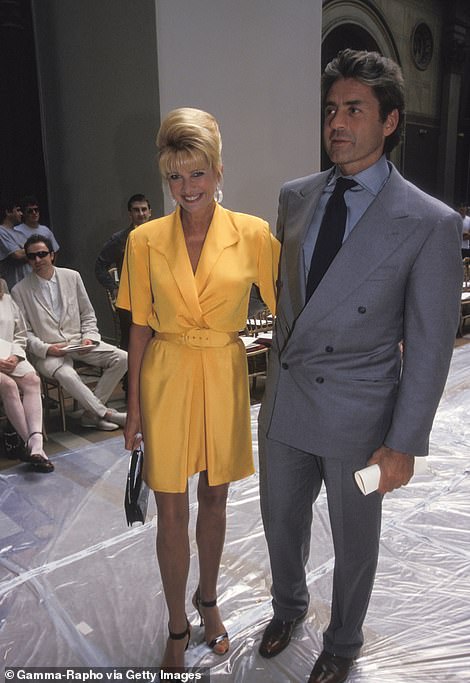 The two met in Monte Carlo and enjoyed a whirlwind first few years together, with Lovatelli telling the N ew York Times in 1998 that he whisked her away to the Ferrari factory in Italy, where she drove an F1. They were never married, but they stayed together for years

She then dated actor and model Rossano Rubicondi for six years before they married on April 12, 2008  — when he was 36 and she was 59.

Their $3million wedding was attended by 400 guests at her famous ex-husband’s Mar-a-Lago resort in Palm Beach and set to the theme of Shakespeare’s Midsummer Nights Dream, with daughter Ivanka as her maid of honor.

They divorced less than one year later, but their on-again, off-again relationship continued until 2019 when she ultimately called it quits.

But friends of the two said they had grown closer before his death from melanoma in October.

He and Ivana were often seen together out and about in New York City and were last photographed walking arm in arm in July 2021, just months before his death.

In fact, throughout 2021, the pair were seen enjoying one another’s company on at least five occasions.

Following the couple’s divorce in 2009, Rubicondi married Milu Vimo in 2011 and according to Italian news outlets have never divorced. Either way, he remained friends with Ivana for the rest of his life.

And after he died, she tweeted: ‘Rossano … Thanks for the journey we made together, for the good times and the bad, and also the tears and laughter, so many, and everything that we did together. Farewell. RIP.’

Ivana Trump’s wedding to Rossano Rubicondi took place at Donald Trump’s beach club in Mar-a-Lago, Palm Beach, Florida in April 2008 with her daughter, Ivanka, serving as a maid of honor 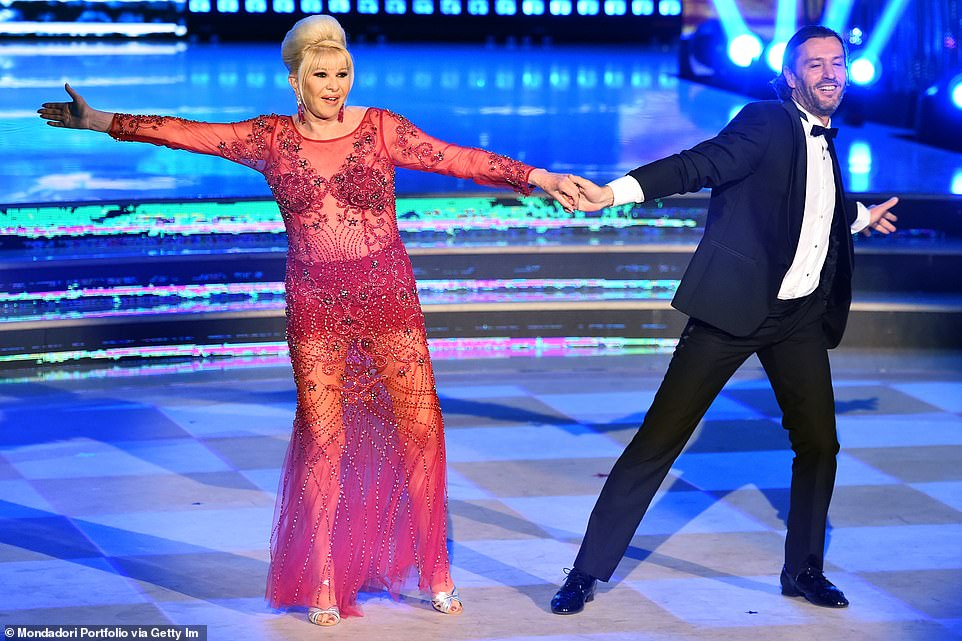 They divorced less than one year later, but their on-again, off-again relationship continued until 2019 when she ultimately called it quits. But friends of the two said they had grown close prior to his death in October. They are pictured as guest dancers on the Italian version of Dancing with the Stars in May 2018

Ivana’s life then came to a sudden end on Thursday when she died of cardiac arrest at the age of 73.

The former model passed away in her home on Manhattan’s Upper East Side, according to her ex-husband, former President Donald Trump, who shared the tragic news of her passing on his Truth Social account on Thursday afternoon.

‘I am very saddened to inform all of those that loved her, of which there are many, that Ivana Trump has passed away at her home in New York City,’ he wrote.

Trump – who shared three children with his ex-wife – went on to pay tribute to Ivana, describing her as a ‘beautiful, amazing’ woman, while honoring her close bond with their kids: Donald Jr, Eric, and Ivanka.

‘She was a wonderful, beautiful, and amazing woman, who led a great and inspirational life,’ he continued. ‘Her pride and joy were her three children, Donald Jr., Ivanka, and Eric.