Do you feel dizzy? Confused? Exhausted? As temperatures rise, many of us find that we are suddenly unable to complete tasks that we normally find easy.

And with Britain hotter than the Caribbean this weekend, scientists say it’s time to take the effects of heat on our brains more seriously.

“Key areas of the brain – particularly those responsible for cognitive tasks – are affected by heat stress.”

With Britain hotter than the Caribbean this weekend, scientists say it’s time to take the effects of heat on our brains more seriously. (Above, people on Brighton beach in East Sussex on Friday)

And Professor Trevor Harley, a University of Dundee psychologist who is an expert on the effects of weather on behavior, says: “When the outside temperature rises above 25°C, the brain struggles to calculate complex tasks. Of even greater concern is the increased risk of suicide and self-harm.’

So what about the hot weather that is melting our brains?

WHY CONCENTRATION GOES OUT THE WINDOW

A wealth of research shows that key brain functions – including those involved in memory, learning and concentration – work less well when it’s hot.

In the summer of 2018, researchers at Harvard University in Cambridge, Massachusetts — where temperatures peaked at over 36°C — conducted tests on two groups of students, one studying in an air-conditioned building, the other not.

Those without air conditioning scored 10 to 15 percent worse on attention, working memory and the speed at which they could process information.

Other studies looking at worker productivity in American and Japanese offices have found that when the outside temperature is at its peak, concentration drops.

“Core body temperature is tightly regulated by the hypothalamus in the center of the brain,” explains Dr. Eileen Neumann, neuroscientist from the University of Zurich. 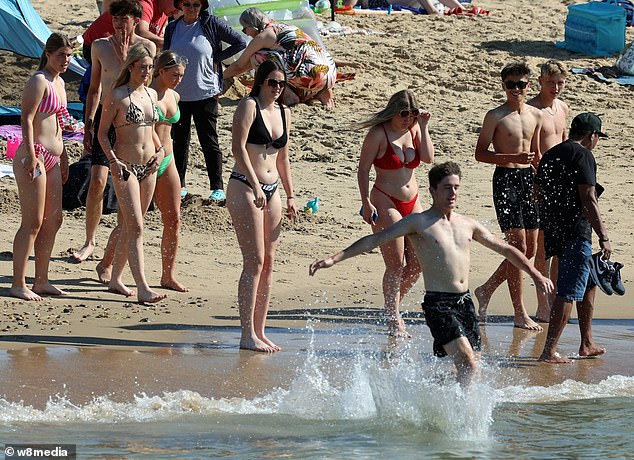 A wealth of research shows that key brain functions – including those involved in memory, learning and concentration – work less well when it’s hot. (Pictured: Families enjoy a dip in the sea at Bournemouth beach on Saturday)

“When it detects an increase in skin temperature, it sends signals to other systems in the body to take action to keep core temperature stable.

“This includes inducing thirst and directing blood flow to the surface of the skin to prevent organs from overheating.

“These processes use up a lot of energy, nutrients and blood flow – and reserve much less for complex brain functions like memory and concentration.”

She adds: “The brain is also particularly sensitive to dehydration – even the slightest dehydration can affect the quality of the signals sent between brain cells.”

An Israeli study found that when temperatures exceed 30°C, even a morning without enough water can impact performance on a variety of cognitive tests.

In extreme cases, heat stroke can occur. This is a medical emergency that occurs when the hypothalamus fails to stop the body from overheating, allowing brain cells to die.

“This can happen after about 30 minutes at temperatures of 30 °C to 40 °C without adequate fluid intake – especially in people with previous illnesses,” says Dr. Neumann. “About one in five people who have had heat stroke have some form of long-term neurological damage.”

THE HEAT CAN CAUSE ANXIETY AND DEPRESSION

What about the claims that heat waves can cause mental illness or make it significantly worse?

In 2020, a large-scale analysis of more than 50 studies involving 1.9 million mentally ill people around the world concluded that for every 1°C increase in temperature, the risk of developing psychiatric conditions, such as depression and anxiety, increased by 0.9 percent rises cents.

As well as comparing climates between nations, the scientists also looked at the effects of mini-heatwaves in colder European climates, including the UK.

In addition, physicians in the United States have reported that there is a significant increase in emergency room visits for anxiety, stress disorders, and mood issues on days with above-average temperatures.

And in Mexico, a monthly increase of less than 1°C has been linked to a 2.1 percent increase in suicides, according to research by Stanford University scientists.

Some scientists say it all stems from irritability caused by sleep disorders: increased sun exposure during the summer months disrupts our sleep-wake cycles and increases the risk of insomnia. 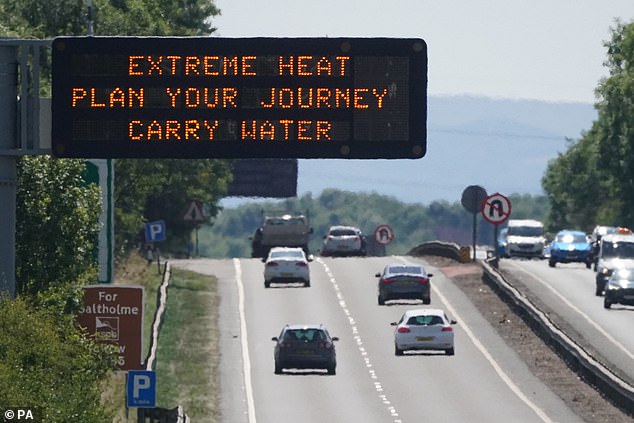 Experts would like to warn those who take psychiatric medication about potentially dangerous physical health risks in hot climates. (Above, a matrix sign above the A19 road towards Teesside shows an extreme weather alert as the UK prepares for the heatwave)

But much more intriguing is the idea that hot weather has a direct impact on the brain itself.

Hot weather disrupts levels of the compound serotonin, which is essential for stabilizing mood and regulating sleep.

While studies show that hormone levels tend to be higher when the weather is very warm, that doesn’t mean it makes us happier.

Brain scans conducted by researchers at the University of Copenhagen identified an increase in proteins that collect excess serotonin and deactivate it.

This leads to a reduction in active serotonin, putting you at risk of low or unstable mood.

“We know that even the smallest fluctuation in activity levels can have a significant impact on mood,” says Prof. Harley.

Sparks can fly at high temperatures

“Evidence tells us that even a 1°C to 2°C increase in average monthly temperatures can lead to a five to 10 percent increase in attacks,” says Dr. Wainwright.

There are some obvious theories: people are more likely to drink alcohol in hot weather or to be easily annoyed by others because they are uncomfortable in the heat.

But Prof. Harley says the answer also lies in a change in our brain chemistry.

He explains that extreme heat triggers a spike in cortisol — the stress hormone released as part of the hypothalamus’ attempt to control body temperature.

Its surge triggers the “fight or flight response” — the body’s natural response to threats, causing a racing heartbeat and increased blood flow to the legs and arms to prepare us for an attack.

However, studies show that a surge in cortisol makes us more likely to engage in impulsive and aggressive behavior.

This can also interact with disrupted serotonin to increase the risk of other symptoms, like anxious thoughts and bad mood, says Dr. Harley. 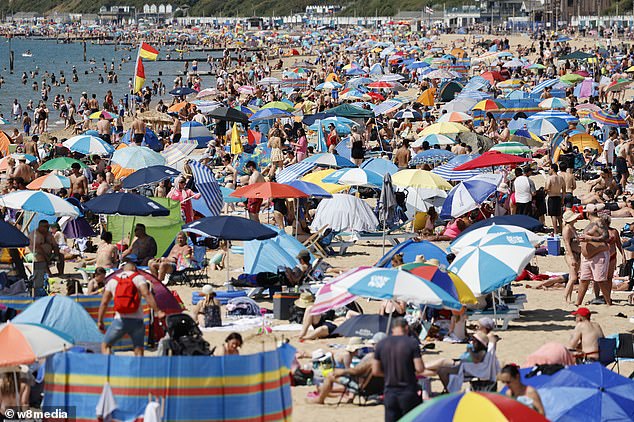 An Israeli study found that when temperatures exceed 30°C, even a morning without enough water can impact performance on a variety of cognitive tests. (Above, Bournemouth Beach on Saturday)

Those who take mental health medication should beware

Experts would like to warn those who take psychiatric medication about potentially dangerous physical health risks in hot climates.

Some drugs, such as clozapine and olanzapine, which are given to treat symptoms of schizophrenia and psychosis, as well as bipolar disorder and dementia, have a direct effect on the hypothalamus.

As a result, they can prevent the brain from effectively recognizing when we’re too hot.

Those taking these drugs may have less ability to tell when they are thirsty, putting patients at greater risk of dehydration.

Prof Harley says: “We should consider sun protection not only essential for protecting our skin, but also for our mental health.

“The same rules apply to the brain: drink plenty of water and avoid the midday sun.”