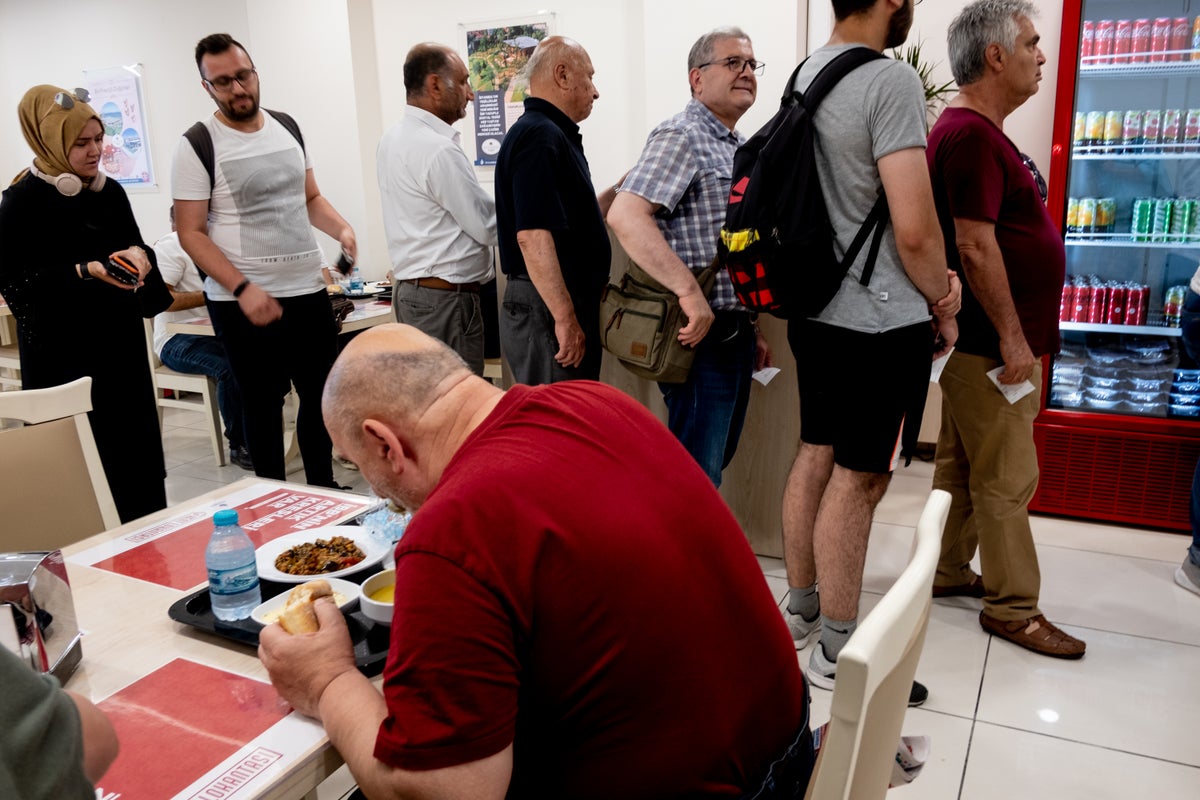 At noon, the door of the Istanbul City Diner opens and people pour in. They are students and retirees, housewives and hospital workers, clerks and shopkeepers. They are all drawn to the restaurant by the promise of cheap, healthy food that defies Turkey’s astronomical inflation for less than $2.

“We just graduated and they immediately cut off our meal cards,” says Ege Uretmen, a 23-year-old medical student who is patiently waiting in line for a meal of chicken stew, rice, soup, salad, a piece of bread and a bottle Water for 29 Turkish Lira, about £1.40, the price of a cup of coffee at nearby restaurants.

This is a phenomenal deal that dates back to before the Turkish lira started depreciating. It has plummeted from about 5 lira a pound five years ago to more than 20 today. Officially, food prices have doubled in the last year. Unofficially, they went even higher.

“It’s very hard at the moment,” says Uretmen, who lives with fellow students in a cramped apartment. “The main problem is the economy.”

Turkey’s inflation last month officially hit a two-decade high of 74 percent, although independent economists put it much higher at 160 percent, the highest in almost a quarter-century. This has led to increased costs for food, shelter, clothing, transportation and health care. Inflation has wiped out savings and wiped out the dreams of people focused on day-to-day survival.

“Five years ago, buying groceries wasn’t a luxury; Now people who are poor and in vulnerable situations can no longer pay for their groceries,” said Hacer Foggo, a poverty expert who advises the opposition Republican People’s Party (CHP). “They are not able to pay for a normal apartment. They can’t pay for natural gas. They can’t buy meat or milk, they get by with individual food packages that only contain noodles.”

Inflation has created a lot of social problems that will undoubtedly change people’s lives in the years to come. Parents cannot afford baby food for their infants. Children are dragged from school into the world of work. Foggo described a pair of siblings, ages 12 and 16, who took to the streets to sell water to help their struggling family make ends meet. The 16-year-old was hit by a motorcycle, leaving her bedridden, adding to the family’s dire situation.

Muzaffer Gül began working for a natural gas company during the pandemic, installing gas meters and cutting off supplies to households that weren’t paying their bills. The work has been busy from the start, but the pace has steadily increased since the beginning of the year. The work is both morally and physically taxing, he said, as more and more Istanbul residents fall behind on their bills.

“People have complained a lot on social media, both about the high price of life and of course about rising prices,” he says.

Complications often strike the most vulnerable in society, creating a cycle of despair. Poorer women can no longer afford tampons, making it difficult for them to get to work or school. Clinics that used to give out free contraceptives can no longer do so, increasing the risk of unwanted pregnancies. People go without essential medical care or medicines and leave illnesses untreated. Meat, fish and chicken are becoming unaffordable for the poor, but inflation is also affecting the middle class.

“That means living standards are falling and poverty is rising,” says Timothy Ash, an economist who focuses on Turkey at Blue Bay, a London-based wealth management firm.

Supply chain complications and rising fuel prices have exacerbated inflation concerns around the world. But Ash, who follows Turkey’s economy closely, blames much of Turkey’s inflation on President Recep Tayyip Erdogan’s leadership. Erdogan has flouted macroeconomic fundamentals by insisting that low interest rates would ease inflation, a view not generally shared by economists. The result has been a focus on keeping interest rates relatively low and credit available to spur growth.

“Inflation affects everyone and everyone can feel it,” says Ash. “It’s hard to tell the difference between three or four percent growth and six percent growth. But everyone is feeling inflation at 75 percent.”

The slide has wreaked havoc on wage earners and retirees. The government recently increased the monthly minimum wage by 30 percent to 5,500 lira, the equivalent of around $327. Minimum wages were increased by a further 50 percent in December. According to economists, however, the current minimum wage remains below the poverty line.

Labor laws are loosely enforced in Turkey, unemployment is high and companies feel they have the upper hand. Many employees are forced to pay back pay increases to their bosses and are reluctant to collect their debts. The country was recently ranked among the top 10 worst nations in the world for workers’ rights. “Workers are fired every day for joining unions and demanding their rights,” said Arzu Cerkezoglu, president of DISK, a left-leaning union group in Turkey.

Many Turks had hoped the fall in the value of the lira, combined with easy credit, would boost exports and boost industry, create jobs and boost the economy. However, Turkish manufacturers are largely dependent on imported raw materials and parts, the cost of which has also risen.

The family-owned By Tanas Shoemaking Factory in Istanbul opened last year and cost around 70 Turkish Lira for the raw material for each pair of shoes. Now the cost has more than doubled to about 150 per shoe. While Turkish wholesalers can only pay around 140 per shoe, customers are looking for even lower prices, says Ayse Tanas, the factory’s co-owner. For the time being she has stopped producing new shoes.

“This whole month has been a dead season for us,” she says. “If they can’t afford food, clothes aren’t a priority.”

The shoes could fetch maybe $15 (12 pounds) a pair abroad in places like Algeria, Azerbaijan and the Balkans, but the war in Eastern Europe has dried up two of the Turkish footwear industry’s most lucrative export markets in Russia and Ukraine, as well as transport costs and export-related bureaucracy reduces profits.

As in other industries, large, politically connected conglomerates dominate Turkey’s show exports, crowding out smaller players like By Tanas that are struggling to meet payroll.

“The big companies get tax breaks and debt relief when they get into trouble, but the smaller companies don’t get those benefits,” she says.

High inflation has weakened public confidence in government institutions. According to a poll, only about a quarter of Turks believe official statistics, while more than two-thirds tend to trust unofficial higher figures, which put inflation at 160 percent. The rising prices have had political consequences, with polls showing Erdogan was well behind several leading opposition politicians, including Istanbul Mayor Ekrem Imamoglu, ahead of the 2023 elections.

The experiment in subsidized food by the Istanbul Mayor’s Office began last month and was part of a series of potentially politically motivated projects aimed at helping pre-vote and building goodwill. Other projects include low-cost day care centers for working parents and subsidized dormitories for students.

The lunch crowd in the City Diner gives an idea of ​​how far the crisis in Turkey has reached. Including families with children, an elderly woman with a traditional headscarf, a lawyer on her lunch break and a hipster in a black Metallica t-shirt.

“Our target audience is students, people on minimum wage and those earning below minimum wage,” says Murat Yazici, a deputy mayor who oversees the diner. He says the mayor’s office hopes to open at least nine more such restaurants by the end of the year and place them in neighborhoods in the city of 16 million.

Yazici concedes that subsidized restaurants, housing and daycare could increase the city’s budget, but suspects they will ultimately cost less than the social and health problems caused by inflation.

“We don’t think we’re going to solve poverty with our City Diners, but we’re trying to reach as many people as possible with all of our different services. “We know we will not end hunger. But we opened City Diners to alleviate hunger, even temporarily, along with other issues that result.”

Naomi Cohen contributed to this report.