Sales of fans and air conditioners are rising as Britain struggles to stay cool ahead of record highs of 41C (106F) on Monday and Tuesday.

Air conditioning often costs over £300 and is expensive to run. The average portable air conditioner costs around 28p an hour, or £19.60 if you use it every night for a week – which works out to around £80 a month.

The typical 120W pedestal fan will set you back an average of 3.4p an hour, according to Uswitch, meaning it would cost you around 33p to leave it on between 10pm and 8am. 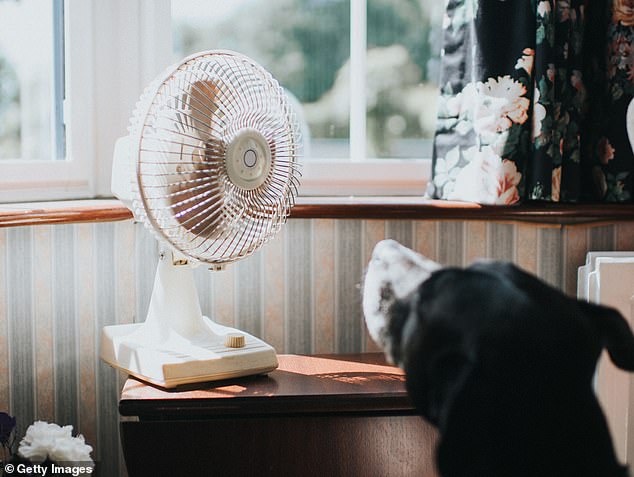 Over a full week this would be £2.35 – 75p more than last summer thanks to the rise in household bills.

Interestingly, experts say mechanical fans should be used when temperatures are below 35C, but not at higher temperatures, as they can aggravate dehydration.

The UK Health Security Agency today issued a Level 4 heat health alert for both days covering the whole of England, warning: “Sickness and death can occur among the fit and healthy, and not just in high-risk groups.”

Tesco said it sold 14 times more paddling pools last week than the week before, while sales of inflatable sprinklers and water features were up 1,568 percent.

It’s also preparing to sell more than 9 million iced treats this week, as well as more than 900,000 packs of BBQ meat, two million packs of sausages, nearly three million punnets of strawberries and more than 5.5 million bottles of wine.

Helen Sutton, purchasing manager for ice cream and frozen desserts at Tesco, said: ‘As Brits try to cool off in the coming days, we are forecasting a record number of customers adding ice cream and lollipops to their trolleys – as well as grilled favorites such as sausages and burgers.’

John Lewis reported that fan sales are up 256% year-on-year, while blackout curtains are up 193%.

Lakeland said sales of a patio mosquito and mosquito repellent machine were up 53% from last week as households planned to spend the evenings outdoors and the retailer sold 20% more insulated cooler bags.

Lakeland shopper Rebecca Dudley said: “Shoppers have flocked to us for the best summer shopping, from cooking outside to keeping bugs at bay, perfectly timed for the heatwave.”

Meanwhile, Londoners have been advised to download an app that will tell users the nearest water refill station.

The Refill app’s map shows hundreds of public water fountains in central London, as well as thousands of locations across the capital, including Costa Coffee, Greggs and Morrisons, that have pledged to offer free drinking water.

Steve Hynd, Policy Manager at City to Sea, the charity behind the app, said: “As the UK heats up this weekend it’s important people know where to access free drinking water to stay hydrated and safe .

“Small regular sips of water will be key as temperatures could soar past 30 degrees. With the Refill app, people can do this without having to buy expensive and polluting single-use plastic water bottles.”

Health officials have urged Britons “to look out for others, particularly the elderly, young children and babies, and those with underlying health conditions” – while the Met Office today issued its first “red” extreme heat warning.

It comes as schools prepare to send students home early, cancel physical education classes and ban children from playing outside in a series of measures seen as preparing the country for record-breaking heat.

How can I keep my house cool during record heat?

With the weather warming up across much of Britain later this week, it’s becoming more of a challenge than ever for those struggling to keep cool in the heat.

According to the NHS Eat Well Guide, it’s recommended that you drink at least six to eight cups or glasses of water on a normal day, so during a heatwave try to increase this.

Be sure to drink plenty of fluids throughout the day to stay hydrated, which will also help improve your brain function and increase your alertness.

Unfortunately, for coffee lovers, it’s best to avoid hot beverages, so substitute a tasty fruit juice or smoothie, or a low-sugar alternative for a refreshing beverage.

As you relax at home this weekend, swap your trusty loungewear pants for a pair of shorts or gym clothes specifically designed to be lightweight and keep you cool during your workout.

The human body uses extremities like your hands and feet to shed excess heat to regulate your core temperature, so don’t forget to take off your socks, too.

If you need to dress smartly for an event this weekend, opt for a loose linen or cotton top to keep you cool and comfortable throughout the day.

If your home gets a lot of sunlight, try moving to a cooler spot in your home, whether it’s a room with fewer windows or one on the north side of your home. Or try closing the curtains in rooms that face the sun, and only open the windows during the cooler hours of the day to keep hot air from entering.

Turn off all electrical devices when not in use, such as your TV or laptop charger, as these can generate a small amount of heat. Also try not to use your laptop on your knees as this can quickly heat up your legs.

According to a study by air conditioning supplier Daikin, four out of ten people say they have taken a cold shower to stay cool. Six in 10 people (62%) said they took even more extreme steps to survive a heat wave.

These included dipping your feet in ice water, sitting next to an open freezer door, sleeping with a damp towel over your head, putting your bedding in the freezer, or even giving up altogether and spending the night in the garden.