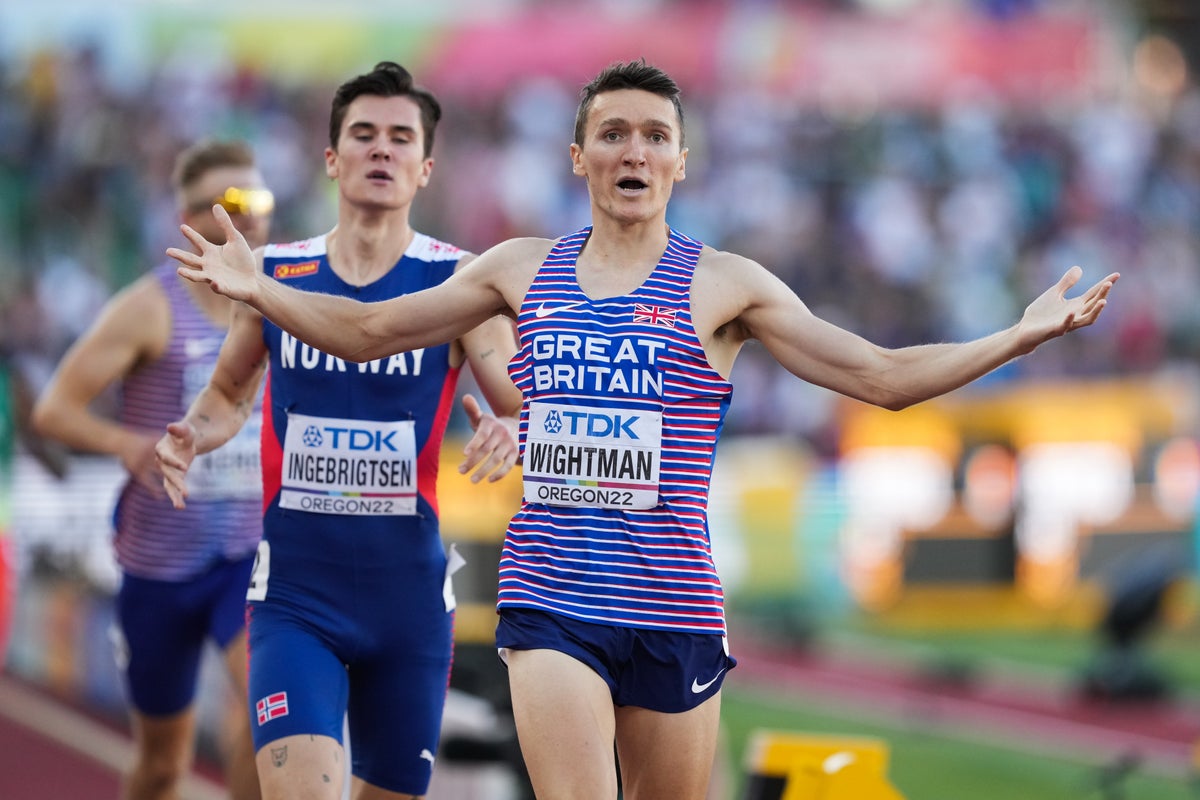 Jake Wightman took a stunning gold medal in the 1500m at the World Championships – with dad Geoff commenting on his shock win.

The 28-year-old won Britain’s first gold at Eugene on Tuesday night, announced by his father and trainer Geoff at Hayward Field.

Wightman won in three minutes, 29.23 seconds ahead of the Olympic champion Jacob Ingebrigtsen and the Spaniard Mohamed Katir.

He is the first Brit in 39 years to win the 1500m, since Steve Crams’ victory in 1983, and hopes he has managed to break his father’s style.

“Dad can be a bit of a robot on the mic at times, some people say robot, some say pro,” he smiled. “I hope he broke that today. It will be interesting to look back on. My mother was in tears, at least someone was crying.

“I didn’t hear him, hopefully that’s because he was a bit emotional. One of the first things he said was, “Now get ready for Commies (Commonwealth Games).

“I’m 28 now, I don’t know how many more opportunities I’ll get and I hope there are many more to come. I have to make the best of it. It’s important to reach the milestone in a way that I never would have believed when I was seven, eight years old.

“There are so many people who have helped me get to this point. My dad trained me since I was 14 or 15. Any club manager from Edinburgh, Loughborough Uni, British Athletics all played a role. The most important thing now is to thank everyone who helped me.”

Wightman was already the fastest man this year and claimed victory with 200m to go.

Ingebrigtsen was unable to react and Wightman clinched the biggest win of his career. world athletics then he moved the awards ceremony to Tuesday evening because the original one collided with his flight home on Wednesday.

“I didn’t want to leave this race like Tokyo (2020 Olympics) where I wasn’t truthful about how I want to run and how I think I could run,” he said.

“The most important thing was to be strong at 200m. I thought, ‘Fuck it, I’ll try’. If I ended up fourth, I tried. If I had finished second or third, I would have tried to win. But I persevered.

“Whatever happens in the rest of my career, I’m a world champion.”

“The main thing about Tokyo was that it was a lot more disappointing than people think,” he said. “I’m not a negative person, but I felt pretty scarred by it. It was a really disappointing ending to what I thought was turning into something really special.

“That haunted me for a while. There were many gaps that I realized needed to be filled, not just in the summer but throughout the winter. We made these changes to be in a much better position in these champions.”

Dad and trainer Geoff announced the drama as it played out in the crowd in Oregon with mom Susan.

“I’ve followed his races all his life since he started as a little boy in elementary school and won a world title here of all places. The main thing is that the Olympics will be made up for.

“You only get one chance in four years. So I’m very proud, very proud. He puts a lot of hard work into it. He’s very meticulous about the way he prepares.”

He also stressed the need to be impartial when announcing runners and organizing the race.

“We’ve had some good 200m semifinals, you just get into a certain groove. But every time I thought, “He’s going to warm up now, he’s going to go to the last call room.”

“But then you have to do the introductions and if I don’t keep it neutral during the 1500m I’m not allowed to do it again.

“I ran 1500m before Jake came on the scene. I would like to do them. So I must not be biased, I must be impartial.”

Wightman’s teammate Josh Kerr attempted to set the tone ahead of the final by winning his semi-final.

But the 24-year-old couldn’t jeopardize the medal places and failed to build on the Olympic bronze from the previous year with fifth place.