She is arguably the most attractive woman in Britain – a seductive blonde with estates in England and Scotland and the lion’s share of her family’s £5billion fortune.

But Leonie Schroder (below) has endured plenty of trauma, never more so than when her ex-husband Nicholas Fane tragically died shortly after their divorce eight years ago.

So I’m delighted to announce that the heiress – the daughter of the late banking billionaire Bruno Schroder – is celebrating her engagement to Guy Blakeney. He is a member of the Royal Company of Archers, the monarch’s bodyguards in Scotland, who appear on ceremonial occasions.

“He made her really happy – for the first time in a long time,” a friend tells me. Management consultant Blakeney, 48, is an Old Etonian – as is Fane, with whom Leonie had three children – and a top shooter, representing the Etonian Shooting Club. 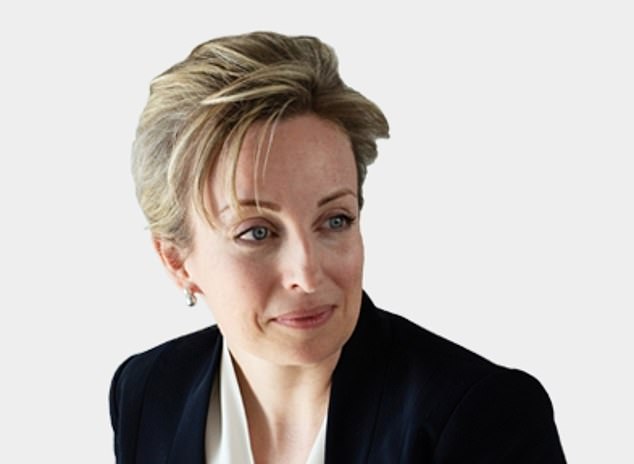 Leonie Schroder (above) has endured a lot of trauma, never more so than when her ex-husband Nicholas Fane tragically died shortly after their divorce eight years ago. So I’m delighted to announce that the heiress – the daughter of the late banking billionaire Bruno Schroder – is celebrating her engagement to Guy Blakeney

Leonie’s own talents were questioned rather cruelly when the Daily Mail Diary revealed in 2018 that her father was planning to put her on the board of Schroders, which now manages a staggering £732bn.

The prospect horrified the city’s bigwigs, with one claiming that Leonie was “completely unqualified” as she had “no financial services experience.”

Leonie, now 48, has held various directorships since graduating from St Andrews University, but only in small organizations such as her father’s 18,500-acre Dunlossit estate on the Scottish island of Islay, or her own 1,200-acre Hurstbourne Park estate in Hampshire.

But shareholder anger was quelled and she was appointed to the board after Bruno died in 2019 at the age of 86.

He had previously been embroiled in a lengthy legal battle with a former lover, Elaine Decoulos.

Friends look forward to the wedding. “The guy is tall and lanky,” says one, “[but] she is a little one. It will be fun to watch them on the dance floor. 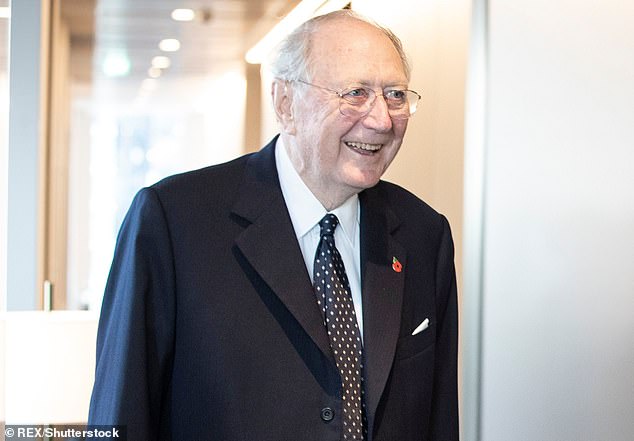 The smart people are talking about… Spencer Scion’s acting skills

No doubt aware of the complaints that show business is full of highly educated stars like Old Etonian Eddie Redmayne and Old Harrovian Benedict Cumberbatch, a new actor more distinguished than all others has dropped his illustrious surname.

I can disclose that Earl Spencer’s son and heir, Viscount Althorp, Louis Frederick John Spencer trained as an actor.

Princess Diana’s 28-year-old nephew, who will inherit the 13,000-acre Althorp estate in Northamptonshire, has registered his stage name as Louis John Lyons.

He has just graduated from ArtsEd drama school in west London and has already been signed to talent agency Tavistock Wood, which stars Dominic West and Lily James. Maybe Louis could play his dad in the Netflix hit The Crown? 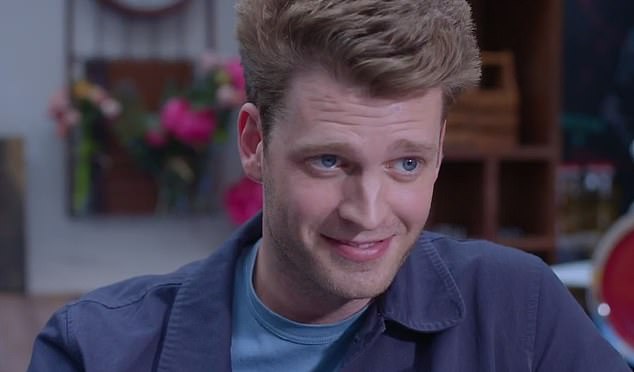 I can disclose that Earl Spencer’s son and heir, Viscount Althorp, Louis Frederick John Spencer trained as an actor

Dog’s Dinner of a Day for Spacey

The House of Cards star, 62, attended the launch party for Cindy Lass’s book A Colorful Pawtrait at the Chelsea Arts Club. Artist Lass, known for her dog portraits, says, “He loves puppies. He has a big heart and I really connect with him.”

However, dogs have gotten the American into trouble: in 2004, he tripped over his Jack Russell Terrier Mini while stalking a youth who had scammed him out of his cell phone. 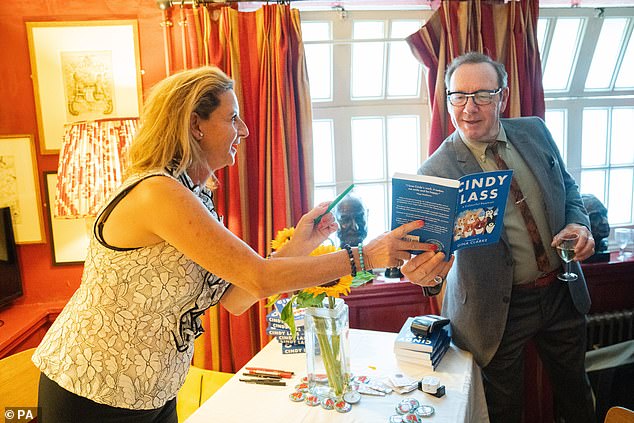 Artist Lass (above), known for her dog portraits, says, “He loves puppies. He has a big heart and I really feel connected to him

The Duchess of Cambridge’s sister Pippa Middleton and her investment banker husband James Matthews appear to have left London for good. Last Saturday I announced the couple had bought a country house in Berkshire for £15million.

Now it appears they won’t be keeping their £17million Chelsea home.

Furniture movers spent three days loading furniture this week. “I just saw the departure of Pippa and family who live down my street,” says opera singer Melinda Hughes. “Seeing them wave goodbye to their London home was quite touching.” 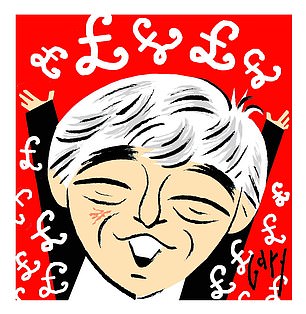 Former Speaker of the House of Commons John Bercow, who was branded a “serial bully” by the Parliamentary watchdog, increased his company’s fortune by almost £75,000 while demanding taxpayer-subsidized holiday pay.

But new accounts for his company, Fedhead Ltd, show his reserves have risen to £403,051 from £328,330. Bercow used the program to pay his wife, Sally, for administrative support. The company’s name is believed to have been inspired by Roger Federer, Bercow’s favorite tennis player.

Nicole only has eyes for rugby hunk Thom

She had an eight-year on-off relationship with Formula One champion Lewis Hamilton and a shorter romance with tennis player Grigor Dimitrov, but pop singer Nicole Scherzinger appears to have found true love with another sportsman, the former Scottish rugby star Star Thom Evans.

I’ve heard the Pussycat Dolls singer, 44, and Evans, 37, are close to announcing their engagement.

“They’re getting married,” claims a pal. The couple have just returned from a holiday in Mykonos, Greece, where Evans is believed to have proposed. His former girlfriends include model and actress Kelly Brook.

He said he knew Nicole was “The One” since he was a contestant and she was a judge on The X Factor: Celebrity in 2019.

“It was just great for the first few days with Nicole, and it’s been great ever since,” he gushed. 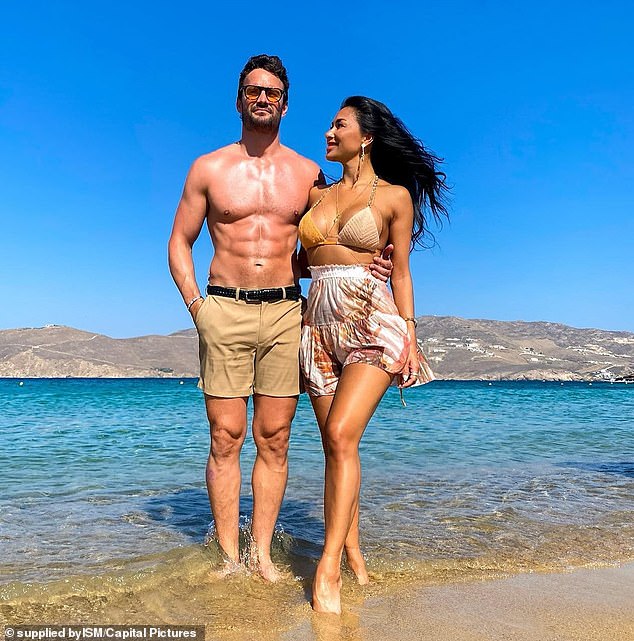 I’ve heard the Pussycat Dolls singer, 44, and Evans, 37, are close to announcing their engagement

The Russian tennis star, 35, shared this photo of her with her son Theodore, who was born earlier this month. “The most beautiful, challenging and rewarding gift our little family could ask for,” she says.

Elderly Etonian Gilkes, 43, is a pal of Harry and Prince William and was previously married to Meghan Markle’s girlfriend, designer Misha Nonoo. 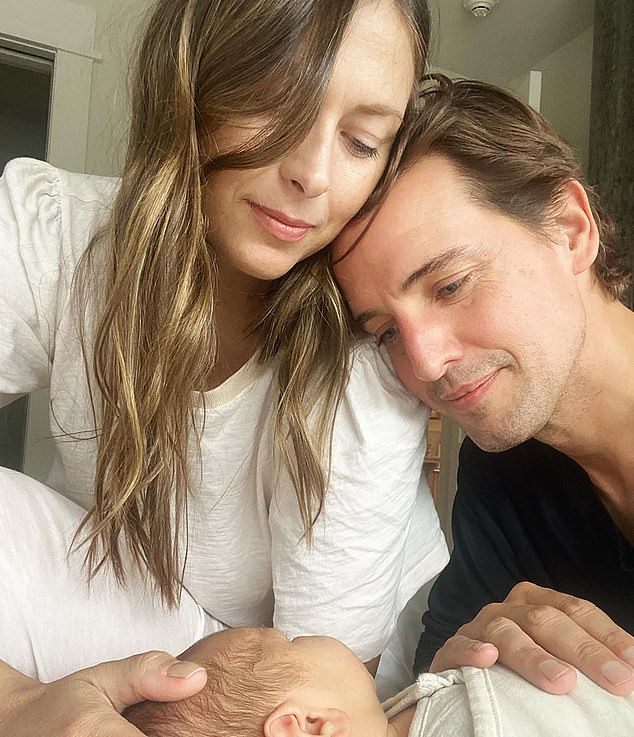 The Russian tennis star, 35, shared this photo of her with her son Theodore, who was born earlier this month 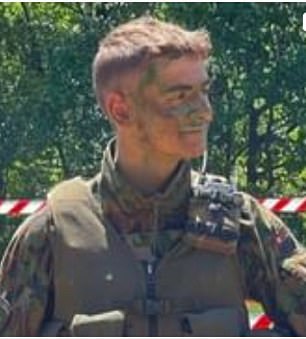 As the son of Kirsty Bertarelli, the beauty queen whose divorce from Swiss tycoon Ernesto made her wealthier than the queen, you might expect Falco Bertarelli to be a spoiled playboy, spending part of his mother’s £400million divorce settlement.

In fact, the 18-year-old has just completed his training as a special operations commando for the Swiss army.

“So proud of you,” says his mother, 51, who was born Kirsty Roper in Staffordshire.

“You joined the Special Forces on your own and passed, not an easy task. Crunching and courageous.”

Does Radio 3’s Essential Classics presenter Georgia Mann have the memo about BBC presenters being downstairs with the kids? “A group of teenagers have just arrived at the Teddington riverside,” she complained on social media from her spot on the River Thames in south-west London.

“Everyone seems very nice – but they play music at a deafening volume and I just can’t imagine how annoying and antisocial it is. Realize I’m a grumpy old lady, but SERIOUSLY.”

Why not hit back with some atonal Schoenberg, Georgia?

Prince George, aged eight, managed to keep his suit and tie in the Royal Box at Wimbledon in temperatures hovering in the 30C.

Things are more complicated at the RAC, the gentlemen’s club half a mile from Buckingham Palace.

It has concerned one supporter who bemoans the dress code has been relaxed too much, allowing polo shirts to be worn in the summer.

But before George asks his father to top up the annual subscription, he should consider the fate of others his age. Another member, accompanied by his grandchildren, was horrified when porters refused them entry, saying the boys were “inappropriately dressed” – in polo shirts and “tailored shorts”.