Five teenagers have been killed and one taken to hospital after a horror car crash that police are calling the “worst” they have ever seen.

The Nissan Navara lost control and crashed into a tree in East Parade, Buxton, a town of about 1000 people, near Picton, 100km southwest of Sydney.

Emergency services, including firefighters, paramedics and police, rushed to the scene just after 8pm on Tuesday and were met with “absolute chaos”.

Police say they found three teenage girls and two teenage boys in the rubble with some passengers aged 14 or 15. The 18-year-old driver survived with non-life-threatening injuries.

He was seen staring at the sky as paramedics wheeled him to a waiting ambulance and took him to Liverpool Hospital for mandatory tests.

“So it’s a horrific accident scene and a tragedy of this magnitude will have far-reaching implications … for their families, friends and through the local community,” he said.

“I’ve been in the police force for 38 years and it’s one of the worst accident scenes I’ve ever encountered.” 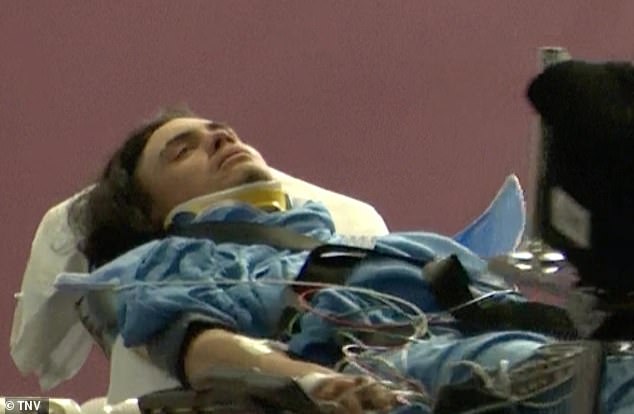 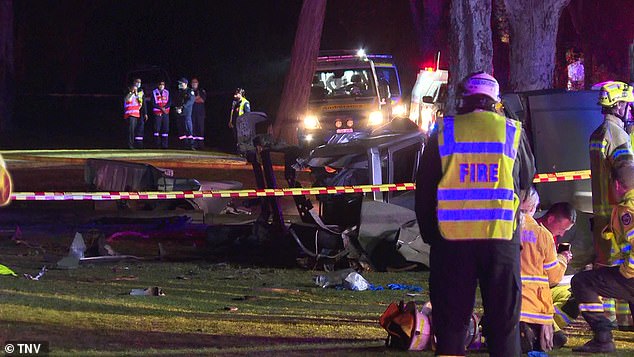 NSW Police said on Tuesday evening: “Three female and two male passengers, all believed to be the same age, died at the scene.”

Charges were not brought.

Supt Fuller said some of the first responders at the scene recognized the victims as local children from their area.

He said he spoke to the principal at Picton High School and that students would be counseling on Wednesday.

Wollondilly Shire Mayor Matt Gould said on Wednesday his entire Shire was waking up in shock and grief.

“I don’t even have the words for how awful this is,” he told Radio 2GB.

“This is one of the most tragic accidents we have had in many years.

“We are a very tight-knit community. Our hearts go out to all family and friends in the small village of Buxton.’ 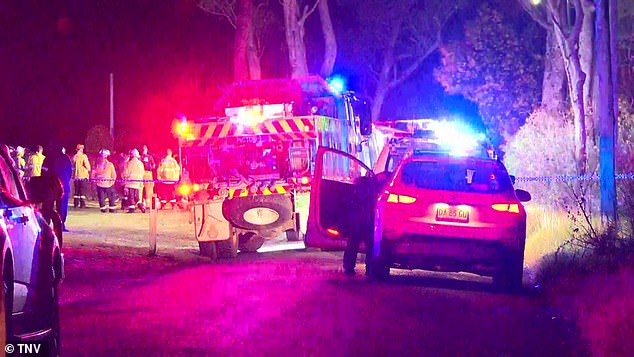 The accident (pictured) happened just after 8 p.m. on Tuesday evening. Police confirm that all occupants of the vehicle are young people 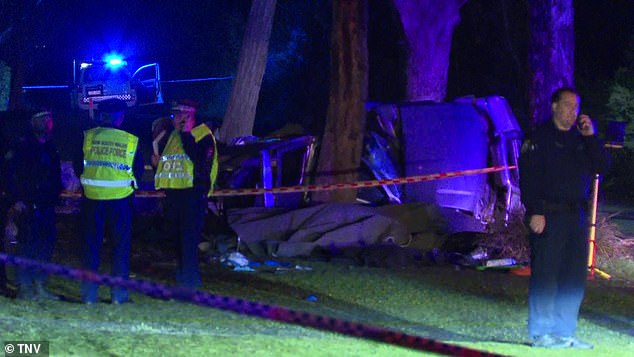 Superintendent Adam Druber told the Today Show that despite the best efforts of rescue workers, “there wasn’t much to be done”.

“A complication with these types of incidents, particularly in these communities, is that many of the emergency responders may know the victims, which adds that extra complexity to our work in the community,” he said.

Fire and Rescue NSW said numerous emergency crews were present “at a serious crash on East Parade with numerous casualties”.

A medical team, which arrived by helicopter, was also present.

Camden Police Area Command officers set up a crime scene which is being investigated by specialist officers from the Crash Investigation Unit.

“An investigation into the circumstances of the crash is underway (and) a report for the coroner is being prepared,” a police spokesman said. 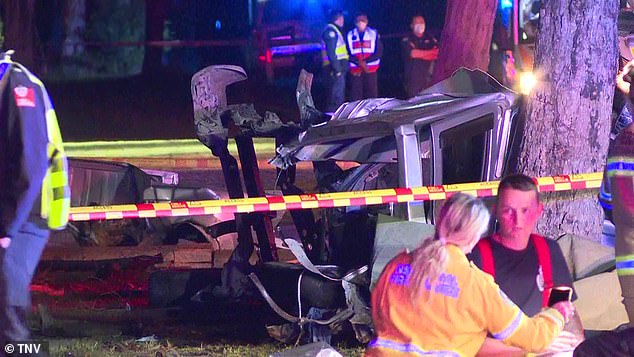 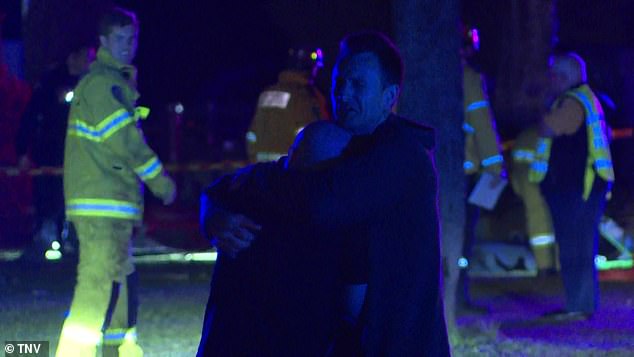 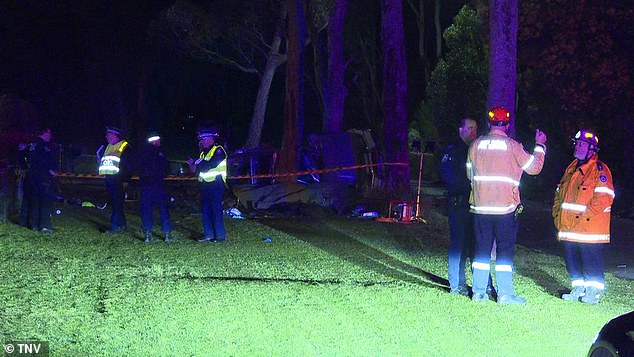 Police and other rescue workers are gathered near the crash site, which has been taped off

A man who lives near the crash site said he heard sirens shortly after the incident and saw a helicopter landing in a nearby field.

“We heard the emergency vehicles react very quickly and saw the lights come on, it lit up the whole street,” Justin Davis told The Daily Telegraph.

“Even when kids ride their motorcycles through the streets, they do it quietly,” he said.

Pictures from the scene show the car blown to bits near the front of the house as distraught locals joined in the devastation. 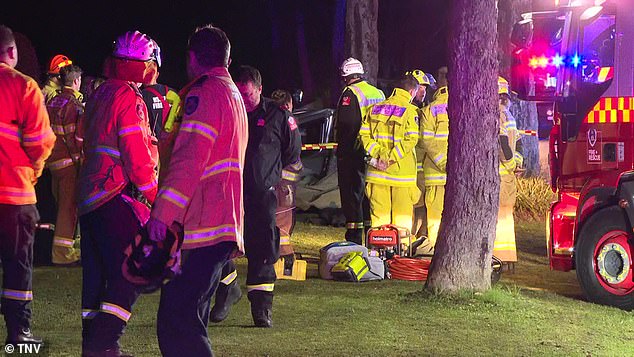 Rescue workers are pictured at the scene of a fatal accident in Buxton, New South Wales

Local residents in their pajamas were interrogated by the police.

No other vehicles were involved in the accident that happened close to Buxton town center.

Police are asking anyone with dash cam footage or information about this incident to contact them or Crime Stoppers on 1800 333 000.

On Tuesday night, a spokesman for Fire and Rescue NSW told Daily Mail Australia that all of its officers have now returned to their stations where they are being questioned following the catastrophic crash. 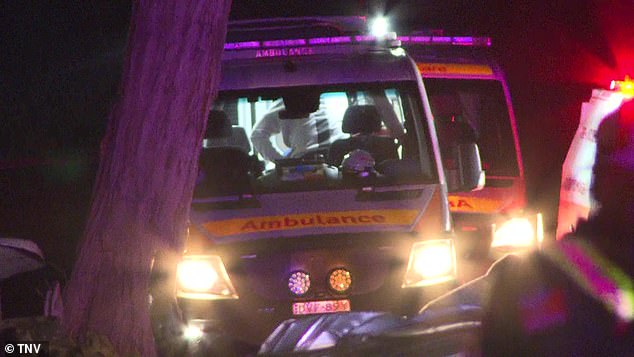 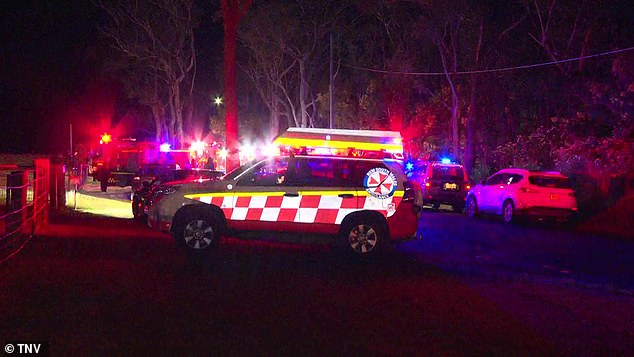