EXCLUSIVE – Britain prepares for the long haul: Four in five believe the cost of living will STILL rise in a year’s time, with just one in ten saying they have NOT made sacrifices to save money

Britons are bleak about the future as four in five believe the cost of living crisis will still hit them a year from now.

About 80 percent of those polled for Mail Online said they believe the current economic tightening of the belts will continue into 2023.

This despite the hopes of politicians and economists that the current increase will start inflation can dissipate as quickly as it rises.

Redfield and Wilton Strategies’ exclusive survey also shows the extent to which families are already cutting back on spending to cope rising prices.

About 63 percent said they shopped less groceries in the past month, compared to 57 percent who asked the question in June. And nearly half (46 percent) have reduced their fuel spend in the face of rising prices, versus 39 percent.

Just one in ten said they had not made any recent changes to their spending in a range of areas, up from 14 percent in June.

More than four in five (83 percent) said they were concerned about the cost of living rising over the year, up from almost three quarters (73 percent) in September last year. 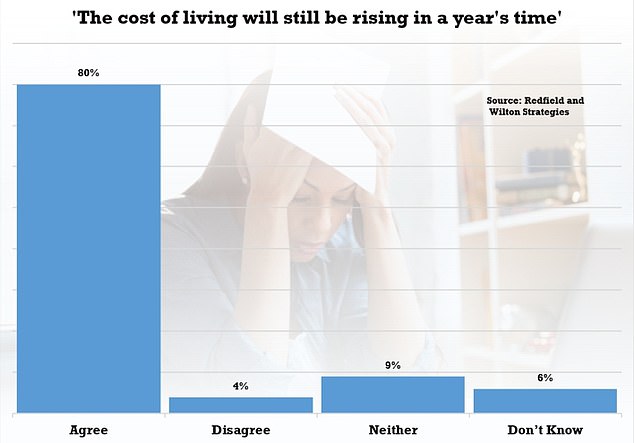 About 80 percent of those polled for Mail Online said they believe the current economic tightening of the belts will continue into 2023. 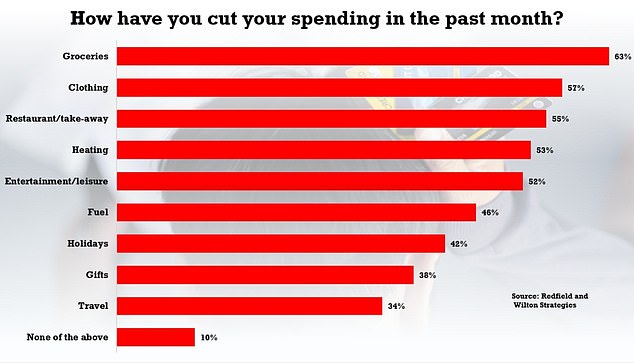 The exclusive Redfield and Wilton Strategies survey also reveals the extent to which families are already cutting spending to cope with rising prices.

It comes after Liz Truss and Rishi Sunak clashed on live television last night over excessive taxes and borrowing rates needed to stimulate the economy.

The Foreign Secretary had earlier promised to temporarily scrap green taxes to cut household electricity bills by £153 and ease pressure on the cost of living.

Ms Truss, who is third in the race to succeed Boris Johnson, also pledged to reverse a proposed increase in corporate tax next year from 19 per cent to 25 per cent – at a cost of £16bn.

But last night live on Channel 4, Mr Sunak defended his No 11 record and said: “I don’t think it’s responsible now to launch into bad debt and more debt which will only make inflation worse. it will make the problem longer.’

Blaming the Bank of England, Ms Truss said: “We have inflation because of our monetary policy, that we haven’t been tough enough on the money supply, that’s how I would tackle that issue.”

But the former chancellor told her: “Borrowing from inflation is not a plan, it’s a fairy tale.”

After Mr Sunak, she said: “We are facing great challenges as a country, the worst economic crisis in a generation, a horrific war that Russia is waging in Ukraine after decades of very slow growth.

“Now is not the time for a continuation of our current economic policies.

“I’m someone who can go down to Downing Street on day one and get the job done.”

Rishi Sunak said he would “get things done” and tackle problems “honestly and responsibly” as prime minister.

“But the choice in this election is who can you trust to capture this moment and get things done?

“The question is simple. Are we facing the challenges of our country honestly and responsibly, or not?

“For me there is only one answer.”