Through Melissa Koenig for Dailymail.com

Newly released body camera footage shows police officers from Uvalde standing in the hallway for more than an hour while a school gunman continued to fire into a classroom full of children.

Video released on Sunday documents the apparent confusion faced by Uvalde police officers on May 24 when 18-year-old Salvador Ramos entered a classroom at Robb Elementary School and began shooting – with 19 students and two teachers inside were killed.

Officers were told by Police Chief Pete Arredondo that day that the situation had changed from one with active gunmen to one with a barricaded suspect – forcing them to act with greater caution, even as Ramos continued firing.

Footage begins with Officer Gazaway standing outside the building at approximately 12:04 p.m. and slowly entering the building where several other officers are waiting, guns drawn.

Some officers at that time were still waiting outside and chatting at the school entrance, while others chatted in the school corridor.

Around 12.08pm the footage goes black, only to return a moment later to show more cops standing in the hallway, apparently awaiting instructions on what to do.

For the next few minutes, Gazaway appears to be pacing the hallway, apparently looking for someone to point him in the right direction, while sergeants can be seen pointing and speaking to some of the officers.

There is no sound in the footage, so it’s unclear what they were saying. 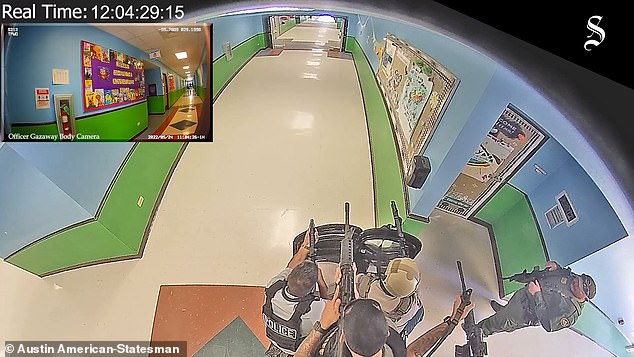 A split view of the corridor before dozens of other police officers arrived shows the officers, guns drawn, standing behind shields yards from the classroom thirty minutes after the shooting began