Children at a school prom later in the year were left in tears and stuck in limousines after a group of bikers allegedly ruined the evening by blocking the road.

Year 6 students at St Gregory’s Catholic Academy in Longton, near Stoke-on-Trent, Staffordshire, were attending the prom on Thursday night when a group of 60 motorcyclists showed up.

It is alleged that the group then frightened children by revving their engines and setting up a “blockade” that made it impossible for the parents to drive down the street.

The school has hit the group for causing “disruption on the public road” and says it is in the hands of the police.

But the bikers themselves have hit back, saying they are there to support a little girl who was at prom and whose mother claimed she was a victim of bullying at school.

They added it was the behavior of other angry parents that left children in tears and claimed one parent threatened members of the group. 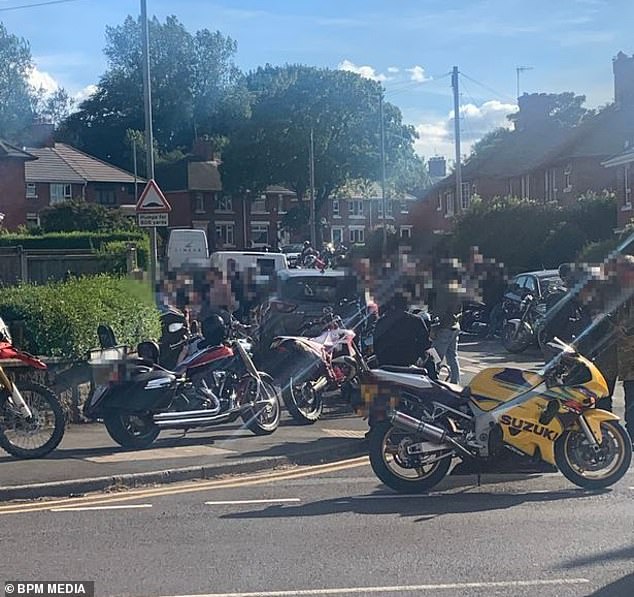 Parents have slammed the bikers, claiming they ruined what was supposed to be a special occasion for their kids

The incident came days after the evening of the school ceremony was marred by threats from a mother, with the school closing a day later on Wednesday after a complaint was filed against the same woman. Stoke on Trent Live reports.

After that, the school’s end-of-year prom for the 6th grade was thrown into chaos when the bikers arrived, the parents claim.

It is reported that clashes broke out between parents and motorcyclists around 6 p.m. when the parents were unable to drive down the road due to the “blockade” and those who were able to “were pulled out of their limousines by teachers.” had to be carried”. ‘.

A Facebook event was set up calling for “as many bikes as possible” to accompany the girl, who was allegedly a victim of bullying at school, to the event. 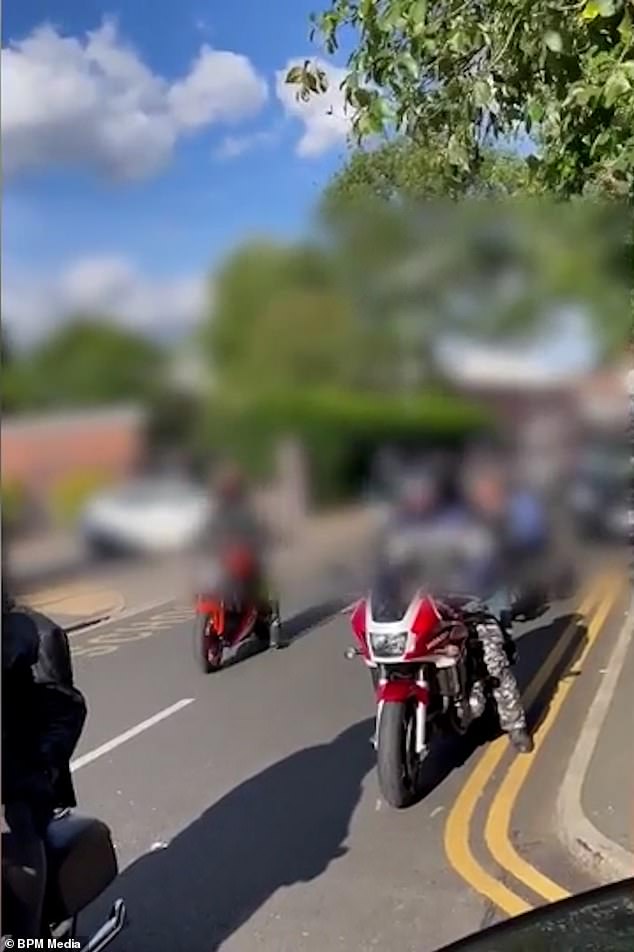 Pictures and video from Thursday night show a group of bikers waiting on Blurton Road before heading down Drubbery Lane towards St Gregory’s. The police were also called to the school because of the disturbance.

Parents say their children are “intimidated and scared” at what should be a celebration of their time at St. Gregory.

Vikki Smith, 32, whose son attended prom last night, said: “My son got stuck in his limo with eight other kids because they couldn’t get through the road. There were no bicycles in sight, it was teeming with people. I asked them to move and they completely ignored me.

“We tried to take pictures of our kids but they turned their engines up so loud the kids were absolutely petrified. My children were dragged out of the limousine by the teachers for their own safety.

“One child got stuck in the middle and was so scared that he had to be carried to school crying, shaking and screaming. The teachers tried to get her to school as soon as possible. Five parents called 999.

“We have no problem with bikers bringing a kid to prom, but why couldn’t they let everyone else through? 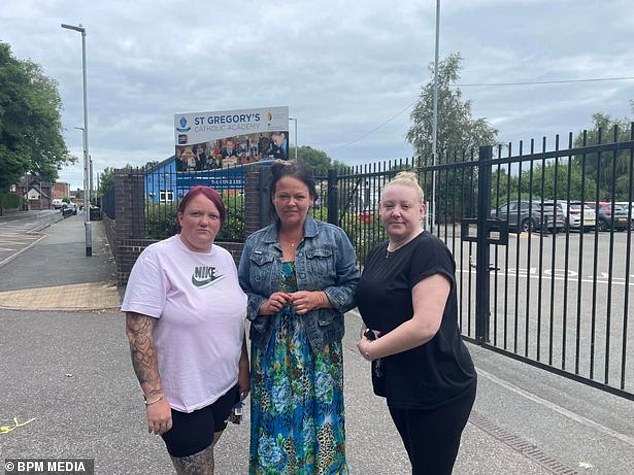 Parents Vikki Smith, Sarah Heeks and Louise Rowe outside St Gregory’s Catholic Academy in Longton. Ms Smith said her son was stuck in his limousine and couldn’t get out

“My son talks to everyone, he’s so lively, but when he came home last night I couldn’t get two words out of him, only one word replies. It scared my son last night.

“It’s just a shame for the kids because they wanted to come and have a good night but instead they were intimidated and scared.”

Adele Forbes’ daughter also attended yesterday’s prom. The 47-year-old said: “They blocked the road and my daughter was late for prom because of it. They told us they were assigned to escort a girl who is being bullied at school.

“The mother of this child started getting excited on Tuesday night at an awards night and told people to fuck off. She said she would get started then.

“Then the school had to be closed first thing on Wednesday morning. I thought the fire alarms were going off, but that was because she was at school and reportedly threatened to throw a vase.

“Many of our children are not used to such behavior and do not deserve it. They want to remember their last few days at St. Gregory’s as a happy place, a safe place.

“But the only thing they will remember now is that someone was aggressive on the pitch and they won’t understand why.”

Simon Grayley’s son was also at the leavers’ prom last night. The 45-year-old said: “It was awful. When they take a girl to school it’s awesome, but once the little girl was inside they tried to evoke a reaction from everyone and keep people from getting in.

“My little boy had to be taken to school. i am disgusted The children couldn’t hear the revving engines and caused distress for the 10 and 11 year olds.’

The cavalcade was organized by two friends after the girl’s mother posted an appeal on social media. They raised £400 which was paid for the girl’s dress, hair and makeup.

Organizer Clare Campbell said: “There were a lot of bikes and when we got there bikes were riding along the road giving way to traffic, parents got impatient and a big man started yelling, cursing and threatening cyclists.

“I was threatened in front of my children. I told them all to stop. Their behavior upset the kids, not the bikes.

“There was a Porsche and, I think, a Ferrari, both revving their engines loudly, but that was ok? Yes, some bikes revved their engines, but that’s normal when doing a biker escort. It was no louder than Porsche or Ferrari engines.

“I am very happy that none of the bikers retaliated for the insults we received. All we wanted to do was make a little girl’s evening special and have her arrive in style. Bikers are great people and we do a lot for charity.

“I have arranged numerous biker escorts to proms and have never had a problem. In fact, everyone loved it. I’m really sad and shocked by the behavior towards the bikers last night. Under no circumstances did we attempt to block the road.

“I feel sorry for the poor children who have witnessed their parents’ disgusting behavior. We tried to do something nice and now we’re being unfairly criticized for it.

“The bikers would have left much sooner if all the parents hadn’t made such a scene. We weren’t wanted there and they were ready for trouble. It was totally gross.’ 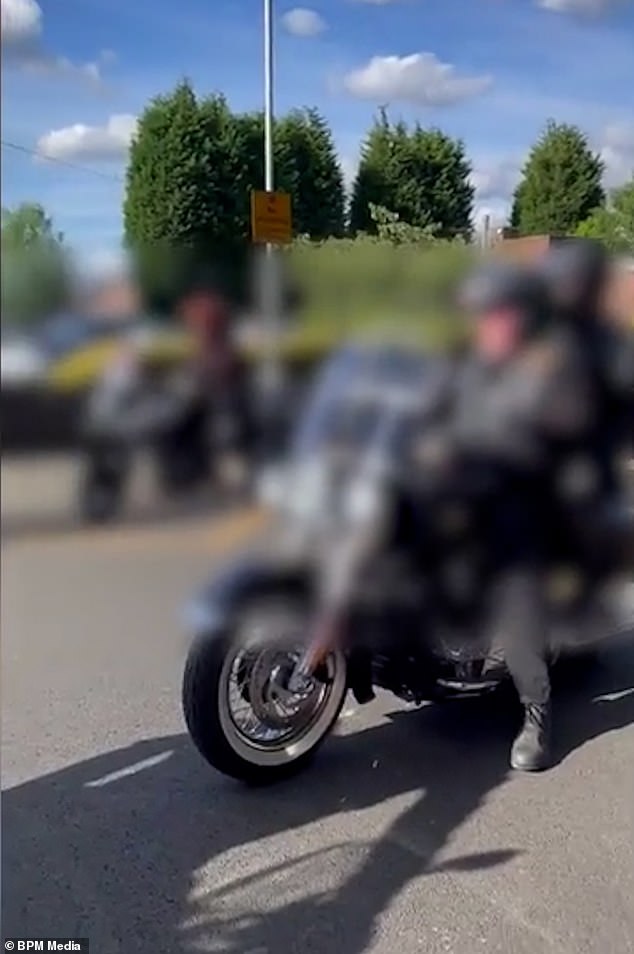 Clare Campbell, who organized the biker meetup, said it wasn’t the attendees’ fault. She said, “Bikers are great people and we do a lot for charity.”

St Gregory’s says the matter is “now in the hands of Staffordshire Police”.

“Any report or complaint will be followed up immediately and action will be taken if necessary.

“Unfortunately, an attempt was made to cause a disturbance on the public street in front of the school when our graduate students arrived for the prom; the adult group in question is not affiliated with the school.

“Some of our students were intimidated and brought to tears by the behavior of the group.

“We are very grateful for the support of our parents who witnessed the incident and the matter is now in the hands of Staffordshire Police.”

Staffordshire Police are investigating both incidents.

A police spokesman said: “Following reports of a disturbance, police were called to a building just before 8.50am on Wednesday (13 July).

“Officials are working to determine the full circumstances of the incident and are conducting high visibility patrols in the area. Investigations are ongoing.’