Rishi Sunak suffered a blow today as a poll showed over two-thirds of Britons believe ultra-rich politicians cannot identify with the struggles of ordinary people.

The former chancellor – reportedly the wealthiest MP in the House of Commons with the wife of a billionaire heiress – is also ranked as the least touched of the candidates for the succession Boris Johnson.

The results of an exclusive research for MailOnline were the five remaining Tory leader Hopefuls fight for the top job – with crunch votes from MPs this week.

In a worrying sign for the conservativeThe Redfield & Wilton Strategies poll suggests the public wants the new prime minister to call snap elections — by 60 percent to 24 percent. 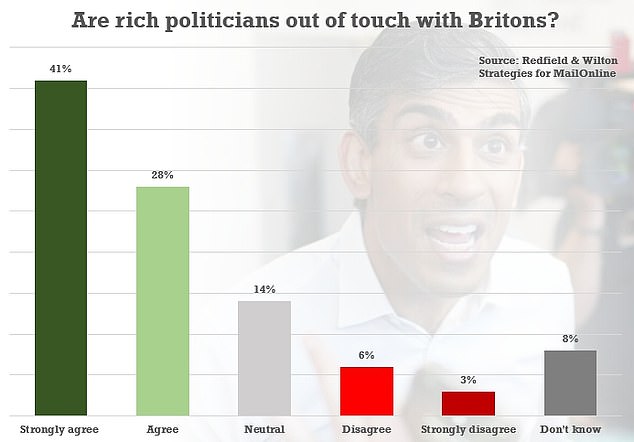 Some 69 per cent agreed that “an extraordinarily wealthy politician cannot relate to the experience of ordinary Britons” – including 41 per cent who said they felt empowered.

But in contrast, only 9 percent disagreed with the idea.

When people were given a list of Tory hopefuls and asked which best fit the “no contact” description, 41 per cent said so for Mr Sunak, compared with just 6 per cent for Liz Truss and Penny Mordaunt.

The surviving candidates are preparing for an all-important TV debate tonight ahead of the next round of MPs’ voting tomorrow.

Mr Sunak has led the ballots so far and is expected to go head-to-head in the Tory members’ vote, but polls suggest he could lose to a rival at this point and there is a big fight over who another place in the last competition.

Trade Secretary Penny Mordaunt has garnered significant support in second place but has faced intense questions about her stance on gender issues.

Meanwhile, Ms Truss has called on the right to unite behind her – and Kemi Badenoch has also shown strength. Ms Badenoch has been empowered by a ConservativeHome poll suggesting she is the activists’ favourite.

Although Foreign Affairs Committee chairman Tom Tugendhat appears to have the least support from MPs in the remaining field, he was seen as doing well in Friday night’s first debate.

Research director at Redfield & Wilton Strategies, Philip van Scheltinga, said: “Our survey clearly shows that with Rishi Sunak as its leader, the Conservative Party would have difficulty engaging with voters in the ‘Red Wall’ and other areas left behind Britain, which voted to leave the EU in 2016 and Boris in 2019.

:: Redfield & Wilton Strategies surveyed 1,500 Britons on 14 July and the results have been weighted to reflect the wider population. 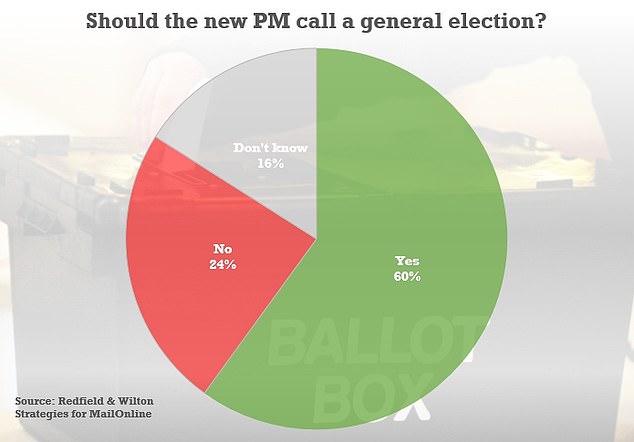 In a worrying sign for Conservatives, the Redfield & Wilton Strategies poll suggests the public wants the incoming prime minister to call snap elections — by 60 percent to 24 percent